Belarusian Olympic sprinter Kristina Timanovskaya, who refused to fly home fearing she would be arrested, was seen boarding a Vienna-bound flight out of Tokyo on Wednesday.

The 24-year-old athlete was set to compete in the women's 200 meters at the Tokyo Games on Monday, but instead said team officials tried to forcibly send her back to Belarus against her wishes after she criticized sporting authorities.

Her drama-filled plight has dominated global headlines around the Games and while her comments were not overtly political, her case has heightened fears of the safety of those who speak out against Belarusian officials.

The athlete had been expected to travel to Warsaw, Poland, where she was offered safe refuge and a humanitarian visa by the country's Prime Minister. It is not clear if she will make a connection in Vienna on her way to Poland, or if she intends to stay in Austria, or travel elsewhere. 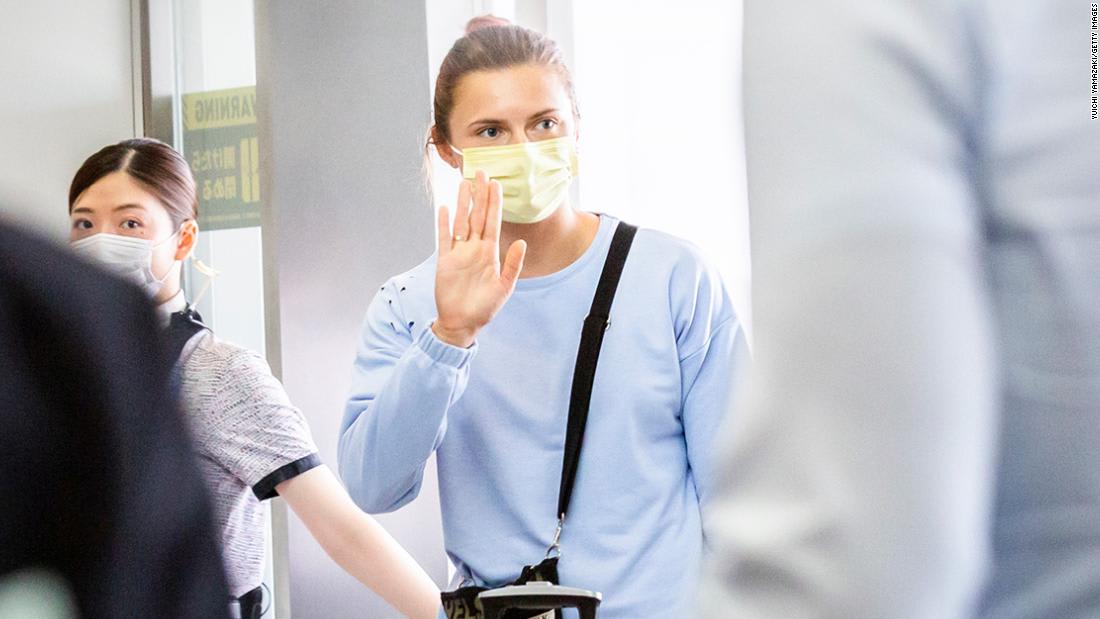 Olympic organizers said Wednesday that 29 more Covid-19 cases linked to the Games have been identified.

Four of those are athletes, including three members of Greece's artistic swimming team. The trio were all residents of Tokyo's Olympic Village and were the only three cases reported from the village Wednesday.

The fourth athlete was not identified.

To date, 327 coronavirus cases tied to the Tokyo Olympics have been identified, including 32 reported from the Olympic Village.

Team USA's Sydney McLaughlin set a world record to win gold in the women's 400 meters hurdles, with a time of 51.46 seconds.

Fellow American Dalilah Muhammad, who won the event at Rio 2016, came second with a time of 51.58 — fast enough to beat the previous world record of 51.90, which McLaughlin set in June.

McLaughlin is the youngest Olympic medal winner in the women’s 400 meters hurdles, at 21 years and 362 days old. She's also the first holder of the world record to win Olympic gold in this event.

The stunning performances by McLaughlin and Muhammad mirror the result of yesterday's men's 400 meters hurdles final, when gold medalist Karsten Warholm and silver medalist Rai Benjamin both shattered the previous world record in the event.

Just days after winning the silver medal in shot put, American Raven Saunders said on social media that her mother, Clarissa, has died.

Saunders said on Twitter that her mother was her “number one guardian angel.”

“(Hopping) off social media for a while to take care of my mental and my family,” she said in the tweet. “My mama was a great woman and will forever live through me.”

She did not say how or when her mother died.

In an Instagram post, Saunders wrote, “Our last conversation was one of the best ever. Mama I know you love me with every fiber in your body.”

Clarissa Saunders had been at a watch party at Burke High School in Charleston, South Carolina, to watch her daughter compete and was interviewed by CNN affiliate WCSC.

“Not being there is a little bummer, but hey, we’re cheering from here,” Clarissa Saunders told the station. “She knows we’re here cheering for her.”

The United States Olympic and Paralympic Committee and USA Track and Field each posted condolence messages on Twitter.

Saunders was vocal about her battle with depression going into the Tokyo Olympics and said she hoped to help destigmatize the topic of mental health by speaking openly.

"I always felt like in life, trying to reach people — to help people — is really my purpose," she said in an interview with CNN in May.

During the medal ceremony after Saunders won her silver, she raised her arms and formed an “X” on the podium for more than 20 seconds as a protest. According to Saunders, the symbol represented “the intersection of where all people who are oppressed meet.”

She was asked about the moment and said it was for the LGBTQIA+ community, the Black community and people dealing with mental health issues.

Following her bronze medal win on balance beam Tuesday, Simone Biles revealed that her aunt had died during the Olympics.

"Two days ago my aunt unexpectedly passed, and that was something I wasn't expecting to happen at the Olympic Games either, so at the end of the day, you have to be a little bit more mindful of what you say online, because you have no idea of what these athletes are going through as well as (in) their sports," Biles said.

"Every day I had to be medically evaluated by the doctors, and then I had two sessions with a sports psychologist which kind of helped keep me more level-headed,” said Biles, regarding preparations for the beam final. “I was cleared to do beam, which I honestly didn't think I'd be cleared to do last night."

Ana Marcela Cunha of Brazil won the women’s marathon swimming event, a 10 kilometer race, by less than a second.

Cunha swam the race, the Olympics' longest swim, in 1:59:30.8 to win her first ever Olympic medal. She has been named open water swimmer of the year by the sport's governing body FINA the last three times the award was given.

Two earthquakes off the coast of Hasaki, Japan, were felt in Tokyo, where the Summer Olympics are currently taking place, according to a CNN correspondent on the ground.

According to the US Geological Survey, the earthquakes registered magnitudes 5.8 and 5.1 and occurred about 75 miles offshore at depths of about 6 miles.

The Japan Meteorological Agency has not issued a tsunami warning. There were no immediate reports of damage or injuries.

It was a day to remember in the track and field events, with Jamaica's Elaine Thompson-Herah completing a historic sprint double-double and Norway's Karsten Warholm smashing the 400m hurdles world record on his way to gold. 26 gold medals in all were won Tuesday at the Tokyo Olympics. Here are the latest winners who are taking home gold:

Sweden’s Armand "Mondo" Duplantis fell agonizingly short of setting a new world record on the way to securing gold in the men’s pole vault on Tuesday.

The 21-year-old failed on three occasions at the height of 6.19 meters.

Duplantis was bidding to surpass his own world record of 6.18 meters.

The last athlete to win the pole vault Olympic title in a world record was Poland’s Wladyslaw Kozakiewicz at the 1980 Games in Moscow.

Duplantis’s gold was confirmed after he cleared a height of 6.02 meters with his first effort.

He remains the only man to surpass six meters this year.