US gymnast Simone Biles will take part in Tuesday’s balance beam final, USA Gymnastics confirmed in a tweet on Monday.

A tweet from the organization read: “We are so excited to confirm that you will see two U.S. athletes in the balance beam final tomorrow - Suni Lee AND Simone Biles!! Can’t wait to watch you both!”

Biles participated in gymnastics qualifications on July 25 and then completed the United States’ vault rotation in the women’s team final on July 27 before withdrawing from competition, citing mental health concerns.

Biles did earn a silver medal as part of the US team’s second place finish in the team final.

The 24-year-old, who won four golds in the 2016 Rio Olympics, subsequently withdrew from four individual finals at the Tokyo Games -- the all-around, vault, uneven bars and floor.

Tuesday’s balance beam will be her last opportunity to secure an individual medal at the Tokyo 2020 Olympics.

Germany set a world record time in the women’s team pursuit with a blistering performance in qualifying on Monday.

Great Britain, whose previous world record mark had been 4:10.236, finished second quickest, with the United States in third and Italy in fourth.

The win gave Indonesia its first gold medal of the 2020 Olympic Games and fourth medal overall.

“Twenty years ago when I was 13 years old I knew that Indonesia hadn’t made any history in women’s doubles," an emotional Polii said after the win.

"I know that I was born to be a badminton player, and I have that fate. I was 13 years old, and I really wanted to make history for Indonesia in women’s doubles.

God has given me the dreams and the fate into my heart."

Polii has overcome plenty of obstacles after being disqualified from London 2012, where she was accused of not doing her best to win a match.

But her partnership with Rahayu has given her new life and a refreshed love for the game.

“I cannot believe that this is what I’ve got. I really did not think I would have made it this far because all I’ve ever thought about is how to get through, how to keep on pushing," Rahayu said after the gold medal match.

"I really did force myself to get this far and do the best that I can. I really want to thank God and my partner.”

Venezuelan BMX freestyle rider Daniel Dhers has been in the game for decades, but this is the first year his sport has been part of the Olympics giving him the opportunity to demonstrate his skill and athleticism to the world.

The 36-year-old Dhers nabbed the silver medal behind Australia’s Logan Martin who is almost 10 years younger than the Venezuelan.

Fresh off his Olympic high, Dhers brought his energy to the CNN set in Tokyo describing to CNN”s Elizabeth Pérez how much this moment means to him.

“I think it’s been super important to be able to showcase freestyle BMX on the biggest stage in the world. BMX Freestyle has come a long way, we used to go out in the streets, kind of create havoc. Now, we are real athletes. The Olympics solidified that position for us.

"We take care of our body, we take care of our minds and we just love to do crazy tricks. I’m glad, I’m so psyched that people back at home are watching it, enjoying it because it’s a beautiful sport. To me, it means the world that we finally made it to the big event.”

Dhers was beyond excited for his first time at the Olympics getting to meet athletes from countries all over the world.

“I kept asking people, 'Hey where are you from? Kenya -- oh that’s awesome.' All sorts of crazy places that I don’t know if i’ll ever be able to go there, but those places united here and we all had a massive party in the sense of, hey we are having a sports party, so it was awesome.”

But will we see Dhers at the Paris games in. 2024? According to Dhers, yes. “You will see me in Paris. So stay tuned.”

It was one of the most dramatic finishes of Tokyo 2020 so far.

Echevarria had also jumped 8.41m in the final round, but was bumped down to silver due to his second longest jump being shorter than Tentoglou's.

“Last attempt, I told myself to calm down and do a normal jump," Tentoglou said. "I didn’t expect it could be so big.

“I consider myself lucky. I was not lucky to jump 8.41m the last attempt but I was lucky to win.”

Echevarria did have one final attempt to eclipse Tentoglou's marker, but broke down on his run up due to injury.

It was very, very painful," he said. "I couldn’t do what I usually do.

"I have no words to express how I feel because I couldn’t achieve what I wanted, what I have been fighting for for so many years," Echevarria added. “I am personally not very happy with the result. I have always tried to go further.”

He declined to share what he was thinking when he fell to the track. “What I thought when I was on the track, it’s better if I don’t say it out loud ... I don’t think it’s appropriate. I don’t think the press wants to hear it.”

Echevarria's fellow countryman Maykel Masso also struggled with injury, but was pleased with his bronze medal.

The three medalists have been competing consistently against each other since 2015, but that competitive edge hasn't stopped them from becoming good friends.

"It’s always satisfying to compete against each other," he said.

“Of course it’s competitive between us, but I really respect them. I am really happy to be here with them both.”

Tokyo's residents may increasingly be warming to the Olympics, but sports bars in the Japanese capital do not appear to be reaping much benefit.

Before the pandemic hit, Tokyo's food and beverage industry was anticipating a big boost for business from the Games. But with overseas visitors barred from entering Japan and Tokyo under a state of emergency due to the surging number of Covid-19 cases, bars and restaurants appear to be suffering.

One local bar owner about five minutes away from the Olympic Stadium said things have been quiet since the Games kicked off last month.

“Only one or two people come to the bar to watch the Games every day," she said.

Bars and restaurants in Tokyo are being asked to close at 8 p.m., and though they can serve alcohol, the government has requested they refrain from doing so.

The owner of another nearby bar, which is serving alcohol but putting in place social distancing measures and customer limits, said his establishment was full on big days for Team Japan, but not on a regular basis.

"The Olympics has not really helped business," he said.

Great Britain's Tom Daley was spotted knitting in the stands in Tokyo on Sunday as he watched the women’s 3 meter springboard diving final.

After winning gold in the men's synchronized 10 meter diving last week, Daley revealed on social media that he'd knitted a crochet case for his medal, adorned with Great Britain’s flag.

Daley says he started knitting at the beginning of the pandemic lockdown and has created an Instagram account to showcase his skills. The 27-year-old has knitted sweaters, hats, and little booties among other things, according to the photos on the page.

Knitting is the “one thing that has kept me sane throughout this whole process,” he said in an Instagram video.

Daley is due back in action on Friday in Tokyo in the men's 10 meter platform diving. 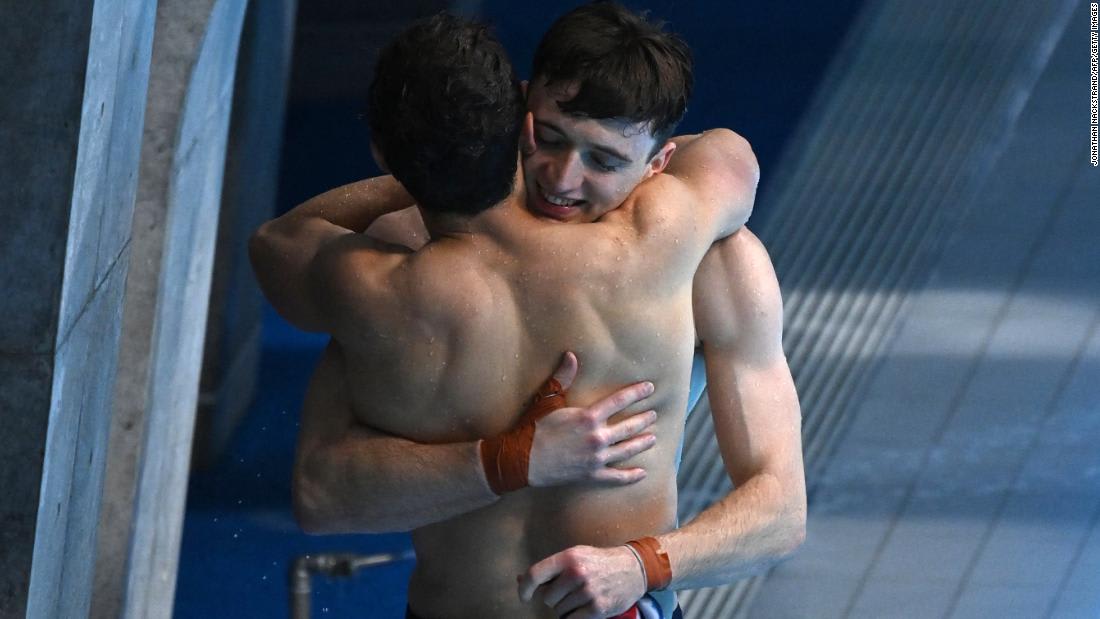 Chinese sprinter Su Bingtian made Olympic history Sunday night, becoming the first Asian athlete to line up in the men’s 100 meter final since Takayoshi Yoshioka in the 1932 Los Angeles Games.

The 31-year-old arrived in Tokyo as a rank outsider, having previously been eliminated twice at the semifinal stage in London and Rio.

But in an extraordinary night of high drama, which saw American medal favorite Trayvon Bromell fail to qualify for the final, Su appeared to defy all expectations, scorching across the finish line of the third semifinal in first place — and setting a new Asian record of 9.83 seconds.

The time — the fastest of all semifinalists — positioned 5 ft 8 in (173 cm) Su as an unlikely favorite heading into the Tokyo 2020 final. On the night though, it wasn’t to be for him. Su finished sixth, clocking in at 9.98 seconds, with Italy's Lamont Marcell Jacobs taking gold in 9.80 seconds.

“Su Bingtian, you’re a miracle of the entire Asia! The pride of all of Asia!” said a top comment with nearly 300,000 likes.

After the race, Su told Chinese state media that stepping on the track had fulfilled his Olympic dream.

“I ran out of my energy in the semifinal. Finishing the final under 10 seconds is not an easy thing for me,” he added.

Indeed, Su was the first Asian-born athlete to officially break the 10-second barrier, the traditional measure of a truly world-class sprinter. Only a select group of Asian athletes have since achieved the feat.

Editor's note: A version of this story appears in CNN's Meanwhile in China newsletter, a three-times-a-week update exploring what you need to know about the country's rise and how it impacts the world. Sign up here.

They both cleared the highest bar, but when it came to deciding a winner, two Olympic high jumpers opted not to take it to a tie-breaker.

Instead, they asked to share the gold medal — prompting cheers beyond their home countries of Qatar and Italy.

Both then attempted to match the Olympic record of 2.39 meters for sole ownership of the title.

However, after three attempts, neither succeeded.

The two athletes were then approached by a Games official. "Can we have two golds?" Barshim asked.

The official nodded, prompting the overjoyed athletes to high five, before Tamberi embraced Barshim in an elated display of celebration.

Despite the ban on spectators due to Covid restrictions, loud cheers rang out from the small crowd in the stadium as the two men ran toward their coaches and teammates. Tamberi, overcome with emotion, collapsed on the track. In the stands, both coaches broke down in tears.

"It is unreal, it is crazy. I am so happy, man. It was the only thing missing (from his high jump career). Now, I am complete, I am so happy," Barshim said. "It is amazing, man. To share it with Marco is an amazing feeling. It is a great feeling. I'm really happy." 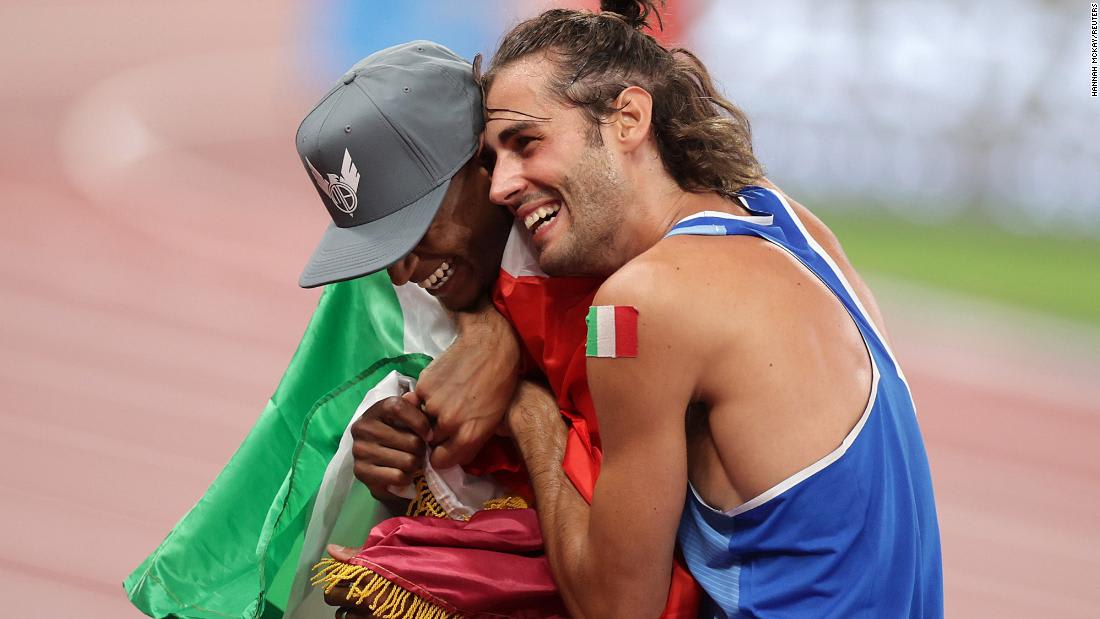