More medals were won and a world record was set at the Aquatics Centre on Friday morning in Tokyo. Here's a rundown from Day 7:

The story of Suni Lee's rise as Olympic gold medalist in many ways reflects the larger struggles of the Hmong people as one of the country's most marginalized Asian American groups.

Like the story of the estimated 309,000 Hmongs who have settled in the US, her journey has been painful and turbulent.

"We were nomadic and we didn't have a place to belong and I feel like we fought adversity," said Koua Yang, athletic director at Como Park Senior High School in St. Paul, Minnesota, where many Hmong refugees settled in the 1970s. "We were warriors throughout history, and here we are in the United States living the American dream. She epitomizes all that ... All the struggles."

Lee's path to Olympic glory has been pockmarked by injuries, the loss of an aunt and uncle to Covid-19 and a 2019 fall that left her father, John, paralyzed from the waist down.

"The past two years have been absolutely crazy with Covid and my family and everything else," Lee told reporters at the Ariake Gymnastics Centre.

The Hmong people arrived in the US in the '70s and '80s; the largest share is in Wisconsin and Minnesota.

During the Vietnam War, Hmong soldiers were recruited by the CIA. Thousands of Hmong died and others forced to flee when the US withdrew from Vietnam and essentially abandoned the ethnic group.

The Hmong were recruited into the Secret War, a CIA-backed war in the country of Laos. Hmong General Vang Pao was recruited to enlist his people to fight against the Laotian and North Vietnamese military. The Hmong fought and suffered losses of 30,000 to 40,000 of their people.

Many Hmong fled to the jungle and eventually to refugee camps in Thailand. In the '70s and '80s a large number of them settled and built a thriving community in Minnesota, where Lee's father would one day erect a makeshift balance beam in the backyard for her because of the family's modest means.

"It's a beautiful story that just illustrates the struggle of human beings and a people and now we get to celebrate," Yang said. 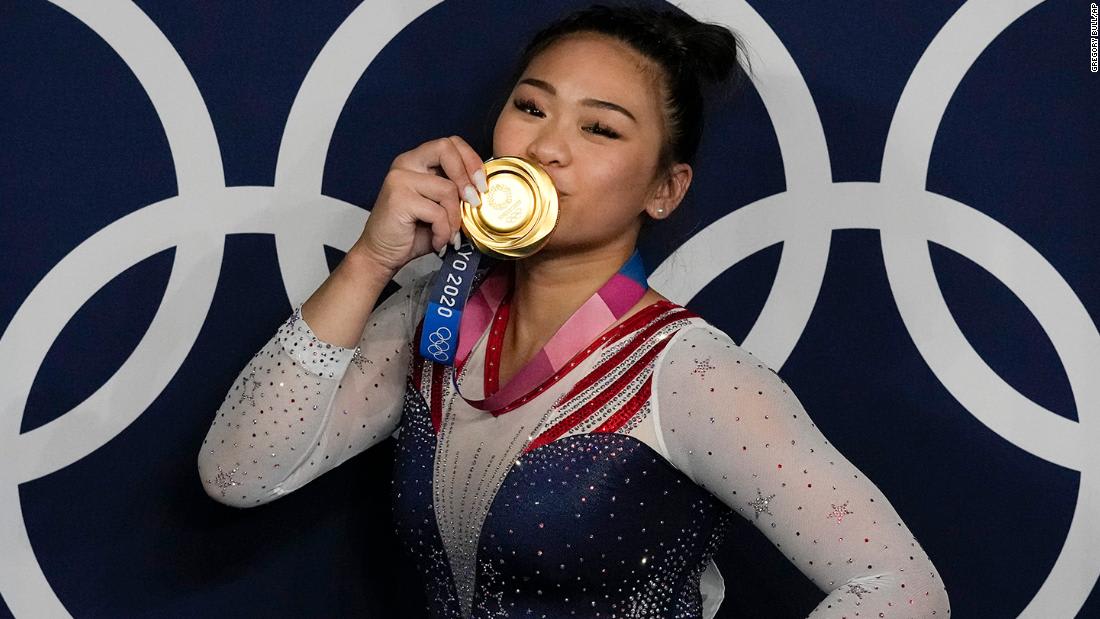 Suni Lee and an epochal moment for Hmongs in America

Biles, one of the greatest gymnasts of all time, withdrew from Thursday's individual all-around competition after stepping away from a dramatic team competition earlier in the week.

The 24-year-old cited mental heath concerns and the need to protect "her body and mind."

"I think it's none of our places to judge what Simone does and what she is doing for her own well-being," Vonn told CNN Thursday night. "I think as an athlete, obviously, I've been in high-pressure situations. I've been injured. I've come back. I'm not Simone Biles. No one is Simone Biles. If that's what she needs to do in order to protect herself or to take care of her well-being, then that's her decision. And we should support it."

Vonn added: "And I think the best thing that's come out of this, is we're having conversations about mental health. And I applaud her for that."

Shooter Alessandra Perilli — one of just five Sammarinese athletes at the Olympics — is the new hero of the microstate, which has a population of 34,000, after winning a bronze medal in the women's trap.

Perilli's victory ensured that San Marino is now the smallest country in history to win a medal at the Olympics.

"What a day to be Sammarinese," tweeted the San Marino fan account.

In 2012 Perilli became the first Sammarinese athlete, of either gender in any sport, to finish fourth or higher in an Olympic event, when she came fourth in trap at the Games in London.

The previous best result for a Sammarinese athlete at the Games was when shooter Franceso Nanni finished fifth in the 50m rifle prone at the Los Angeles 1984 Games.

"During the final, when the fifth shooter went out, I thought, I don't want to be one more time in fourth place, so I have to make it," Perilli told reporters.
"This is the first medal for me and for my country. We are a small country but very proud," she said after the medal ceremony. "They [country] are for sure going crazy, crying. I don't know, but for sure now they are." 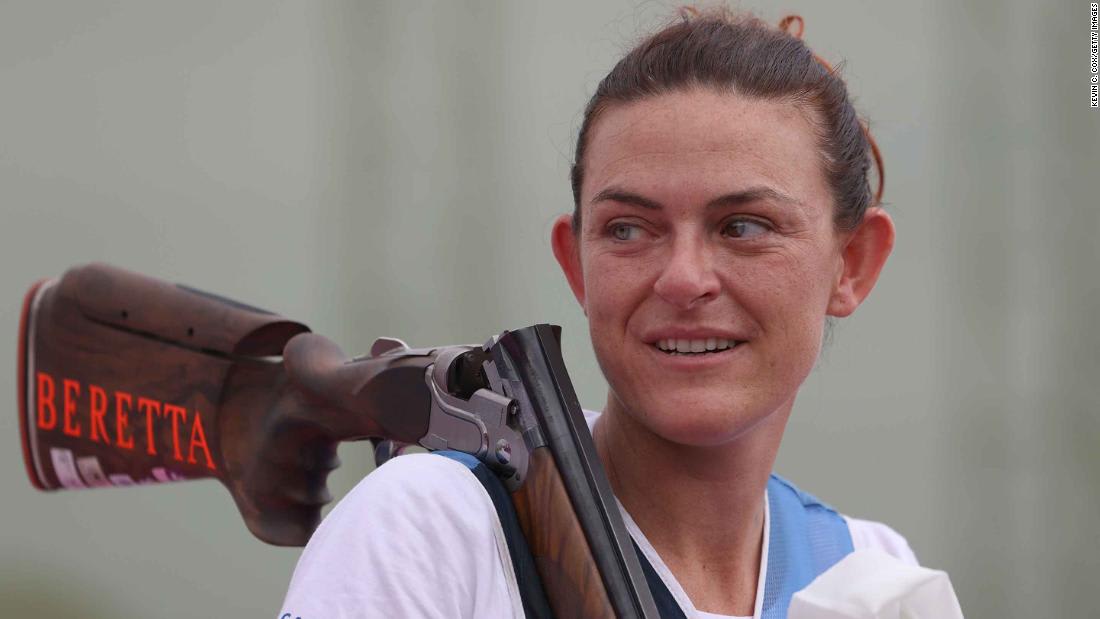 Suni Lee just accomplished what no one expected three days ago — not even herself.

"This is such a surreal moment. I just feel like I could have never been here ever. It doesn't even feel like real life," the 18-year-old said after winning the most coveted medal in gymnastics.

Lee is the first Hmong American to compete in the Olympics and is now the women's gymnastics all-around champion.

She also extended the United States' 17-year winning streak in that competition — a dynasty that seemed in jeopardy this week when the previous Olympic all-around champ, Simone Biles, announced her withdrawal.

But Lee's historic performance — highlighted by the most difficult, astonishing uneven bars routine in the world — also capped an immensely difficult journey.

She's been marred by injuries, lost an aunt and uncle to Covid-19 and grappled with a horrific accident that left her father paralyzed.

In 2019, her father John was helping a neighbor trim a tree when he fell and became paralyzed from the waist down.

The father of six had supported Lee's gymnastics from the beginning — helping her perform tricks around the house, sometimes to the frustration of her mother.

"I was always jumping on the bed or having my dad spot me while I was doing backflips and stuff like that," Lee told TwinCities.com. "Finally, my mom got tired of it" — and that's when she enrolled in gymnastics. 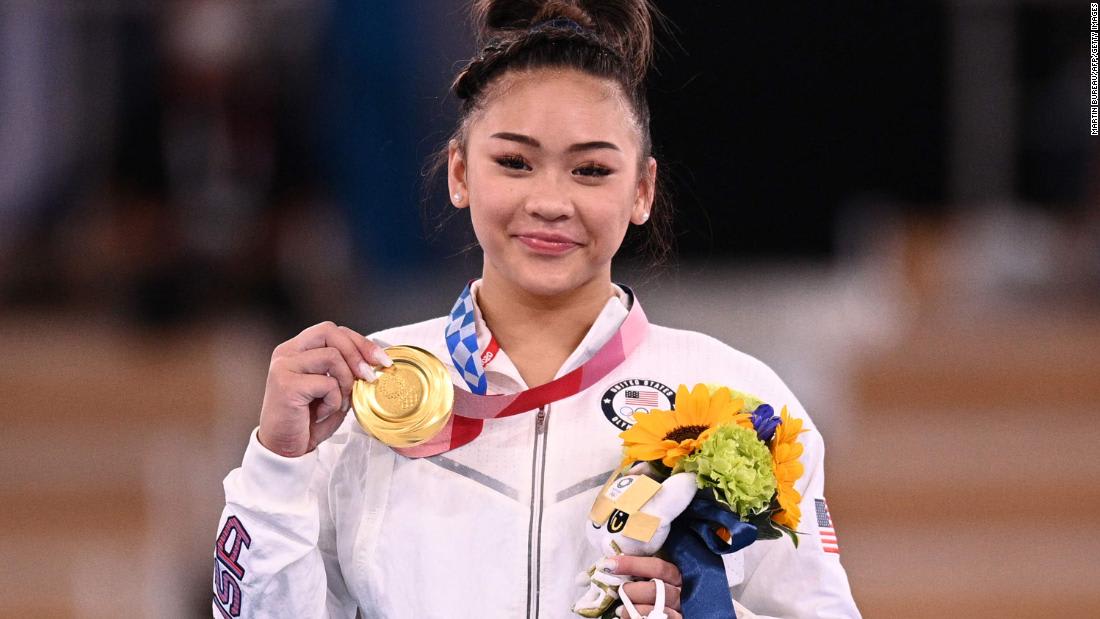 Seventeen gold medals were won on Thursday in Japan during the Tokyo Olympics.

Here's a breakdown of who took home the gold: