US gymnastics superstar Simone Biles has withdrawn from the individual all-around competition to prioritize her well-being, USA Gymnastics said.

The organization said it "wholeheartedly supports her decision."

Biles, one of the greatest gymnasts of all time, was a favorite to take home gold in the all-around. She still may have the opportunity to compete in other individual events, but said Tuesday evening that she was going to take the rest of the Olympics "one day at a time." 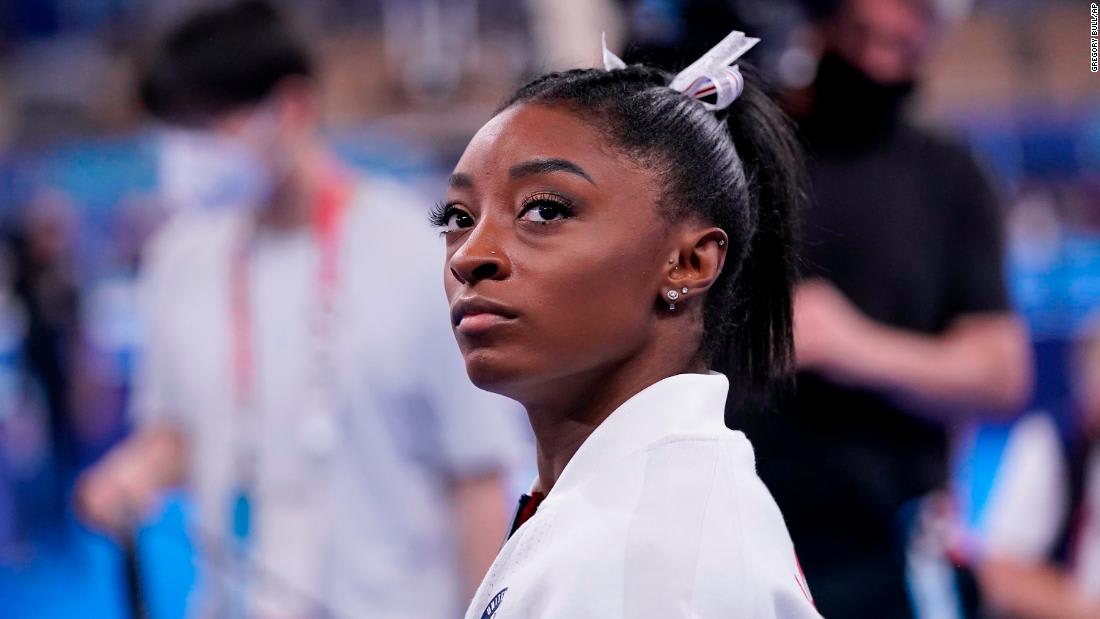 "I feel like people forget that she’s human," Lee said. "Anything can happen. We don’t owe anybody anything. We don’t owe you a gold medal. You’re not the one competing. We’re the ones that had to go through all of this. If anything, we owed it to ourselves, and I think that’s what we did.”

The team admitted they panicked initially when Biles withdrew from the team competition. But then, Chiles stepped up to compete on the uneven bars and balance beam.

“We still got a medal for the United States of America,” Chiles said. “In our minds, this silver medal is a gold medal. We didn’t just get silver. We won silver.”

Biles took to Instagram to celebrate Chiles, who is also her best friend.

Former US gymnast Kerri Strug offered her support for Simone Biles following the US gymnast's decision to withdraw from the women's team finals event.

Strug famously helped win gold for Team USA at the 1996 Summer Games in Atlanta by performing a vault despite having an injured ankle. She was later carried to the podium by her coach.

Strug posted on Twitter that she was sending her love to Biles:

The two-time Olympian added a goat emoji to her tweet, referring to the fact that Biles is known as the greatest of all time, colloquially abbreviated as GOAT.

Australian swimmer Ariarne Titmus, who has won two gold medals at the Tokyo Olympics, said she is managing the pressure of the Games by narrowing her focus, avoiding social media and limiting the things she has to worry about.

When asked by the media about Simone Biles' decision to open up about how her mental health and pressure has affected her athletic performance, Titmus said that she doesn't know much about Biles. She did, however, say that she decided to delete all social media apps from her phone and has not been speaking that much to her family. She's just focusing on racing.

"Honestly, I’ve kind of been in my own little world," she said. "I'm just honestly really focusing on myself and what I have to do here."

Her record win: Titmus won her second gold Wednesday with an Olympic-record in the women’s 200m freestyle. She was visibly emotional following the medal ceremony, tearfully embracing Australia’s swimming coach Dean Boxall after stepping off the podium.

"This is a great partnership. This is not just me winning. This is him winning as well. So I think that's why I got so emotional," she said.

While only a select few people had the privilege of attending the Tokyo Olympics opening ceremony, the public can now see the Olympic Cauldron in person after it was put on display in Ariake Park.

Residents of Japan's capital — and their and dogs — have gathered to catch a glimpse of the flame because, with Tokyo under a state of emergency due to Covid-19, it's one of the few ways they can experience these pandemic-era Olympics.

What most may not appreciate, however, is the thought behind the cauldron’s design.

The Japanese design house that built the cauldron, nendo, went through 85 drafts before landing on a final look.

To make the cauldron, nendo needed machines capable of applying a pressure of 3,500 tons as they had to mold thick aluminum plating into curved shapes. The final product weighs 2.7 metric tons.

The flame itself pays respect to the Fukushima nuclear disaster set off by the devastating earthquake and tsunami of 2011. The hydrogen that fuels the flame was produced in Fukushima prefecture. But because hydrogen has no color when it burns, designers added sodium carbonate to give the flame its vibrant gold hue.

Australia’s Ariarne Titmus has now won gold twice at the Tokyo Games, and both times, she beat out the defending Olympic champion in the event: American swimming legend Katie Ledecky.

Ledecky finished fifth. It was the first time the American had failed to make the podium in an individual Olympic event.

She's also considered one of swimming's most versatile competitors. Though her best events are distance, her range, if compared to sprinting, would be like Usain Bolt running in the 200m, 400m, and 1500m events.

Dominant display: If Ledecky's disappointing finish in the 200m freestyle fueled talk of her demise, her commanding performance just minutes later may force the doubters to think twice.

Ledecky crushed the field in the first-ever women's 1500m freestyle event, finishing more than four seconds ahead of fellow American Erica Sullivan to take gold. That's all the more impressive given at times, she was barely using her legs. One team USA staffer said Ledecky was saving her energy, because she has two events left to go.

Ledecky will compete in the 800m freestyle and is considered a favorite to win that, too.

By the time she's done in Tokyo, Ledecky will have swum a stunning 6,000 meters (3.7 miles) by the time she is finished competing. To put that in context, Michael Phelps swam a total of 3,300 meters when he won eight golds at the 2008 Beijing Olympics.

The International Olympic Committee (IOC) says it hopes it is supporting athletes on issues surrounding mental health but "we can do more," spokesman Mark Adams said.

"It’s an incredibly important issue, and one that’s finally come to the fore. Are we doing enough? I hope so, I think so. But like everyone in the world, we can do more on this issue, and we are, and we’re really supporting the athletes in this," Adams said in a news conference the day after US gymnast Simone Biles withdrew from the team competition due to mental health concerns.

"We all have huge respect for [Biles,] and huge support for her," Adams added, saying that mental health has "been a big issue for quite a few years now, and it’s really coming to the fore."

Biles has qualified for the individual all-around competition Thursday, as well as the individual event finals in floor exercise, balance beam, vault and uneven bars next week.

Simone Biles' withdrawal from the women's team gymnastics final on Tuesday because of mental health concerns "broke my heart," said former US Olympic swimmer Michael Phelps, who has been an advocate for better mental health.

The conversation has taken prime spot at the Olympics after Biles pulled out, which followed tennis star Naomi Osaka's comments on the pressure of the Games impacting athletes' mental health.

"The Olympics is overwhelming," Phelps said. "There's a lot of emotions that go into it."

Phelps echoed earlier remarks from Biles, saying athletes carry "a lot of weight on our shoulders, and it's challenging, especially when we have the lights on us and all of these expectations that are being thrown on top of us."

In addition, the pandemic situation in Japan led to a decision where athletes weren't allowed to bring any family or supporters with them. Many athletes have spoken about the challenge that presents. Australia and WNBA player Liz Cambage, for example, withdrew before the Games began citing mental health reasons, as she was worried about a "bubble" Olympics.

"No family. No friends. No fans. No support system outside of my team. It's honestly terrifying for me. The past month I've been having panic attacks, not sleeping and not eating," Cambage had said about her decision.

Olympic athletes "need someone who we can trust," Phelps said, adding it has to be "somebody that can let us be ourselves and listen, allow us to become vulnerable, somebody who is not going to try and fix us."

"We're human beings. Nobody is perfect. So yes, it is OK to not be OK. It's OK to go through ups and downs and emotional rollercoasters. But I think the biggest thing is we all need to ask for help sometimes too when we go through those times."

Phelps said he hopes this is an opportunity to make the mental health conversation even bigger.

"This is something that's going to take a lot of time, a lot of hard work, and people that are willing to help."

The International Olympic Committee (IOC) hopes it is supporting athletes on issues surrounding mental health but "we can do more on this issue," spokesman Mark Adams said, adding that the committee has a lot of respect and support for Biles.

It's another busy day in Tokyo, but the tremors from Tuesday's surprises at the Olympics are still resonating. Here's what you need to know.

Mental health takes center stage: Simone Biles and Naomi Osaka are changing the conversation at the Olympics. Both athletes didn't perform to their usual standards on Tuesday. Neither has been afraid to open up about their mental health — an often taboo subject in the high-pressure world of competitive sports.

Here's what Osaka said after her surprising defeat in the women's singles tennis third round:

"I feel like my attitude wasn't that great because I don't really know how to cope with that pressure so that's the best that I could have done in this situation."

And this is what Biles told the media after the US placed second in the women's team gymnastics final:

"Whenever you get in a high stress situation, you kind of freak out," she said. "I have to focus on my mental health and not jeopardize my health and well-being."

Biles is 24; Osaka just 23. At such young ages, each has a tremendous weight on their shoulders.

But both seem unafraid to let the world know that mental health is health — it's just that unlike a bone, you can't see when it's broken.

Another gripping morning of swimming: Ariarne Titmus took care of business in the 200m freestyle, setting an Olympic record to win her second gold of the Games, while US star Katie Ledecky crushed the field to win gold in the first-ever women's 1500m freestyle.

Japan's stellar performance: As the sun rose over Tokyo on the fifth official day of the Olympics, hosts Japan remained atop the medal table.

With 11 gold medals, Japan currently still holds a narrow lead over the United States and China.

While it may be early days and even unlikely that lead will hold, Japanese athletes have put on an impressive display so far.

That success may just be translating into Olympics excitement. Polls have consistently shown that the Games have been overwhelmingly unpopular among the Japanese public amid health and safety concerns, but the mood appears to be shifting.