Our live coverage has ended. Read the latest here.

Even as hospitalizations rise more gradually compared to surging Omicron case numbers, some parts of the US are seeing Covid-19 hospitalizations at or near all-time records for the pandemic.

Four states — Michigan, Vermont, Maine and New Hampshire — hit their all-time pandemic peak hospitalization numbers this month, according to a CNN review of data from the US Department of Health and Human Services.

All four have seen hospitalizations decline in the last few days.

Other areas are seeing hospitalization numbers near pandemic peaks.

Washington, DC, with 363 hospitalized as of Monday, is nearly tied with its peak of 383 in January. Ohio, Indiana and Delaware are all seeing hospital numbers at least 80% as high as their all-time records last winter, according to a CNN analysis of HHS data.

Austrian airport authorities turned back about 100 British travelers after it was determined that they did not adhere to the latest requirements for entry in place for safety against Covid-19, according to the Innsbruck Airport deputy head Patrick Dierich.

Those varied from not being boosted in addition to carrying a negative PCR test — a new requirement which came into effect on the Dec. 25 for four countries including the UK — to not being vaccinated at all but carrying a PCR test, and other mishaps, Dierich tells CNN.

“For the most part, they were understanding, but of course frustrated,” he added, expressing surprise that British authorities and the different airlines carrying these passengers had not checked their paperwork, including the entry requirements.

Last week, Austria announced tougher new entry restrictions, but it is unclear when they were made public for English-speaking travelers. The Austrian health ministry now has those restrictions published on its website.

The Austrian authorities agreed to those restrictions last Wednesday, says the ORF national public broadcaster; three days before they came into effect.

The Spanish capital of Madrid will be the only big city in Spain, and one of the few in Europe, to ring in the New Year with a large celebration.

Berlin, London, Paris and Rome have all canceled their traditional festivities.

Organizers in Madrid have capped celebrations in the Puerta del Sol square, in the city centre, at 7,000 people, roughly 60% of the crowd expected in 2019, before the pandemic hit. People in attendance will be required to wear face coverings and observe social distancing rules, the organizers said.

Madrid is the only one of Spain's largest cities to carry on with its New Year's Eve celebrations. Barcelona and Valencia have canceled their fireworks displays in a bid to get people to to stay at home.

The six regions —Aragon, Basque Country, Navarra, Asturias, Cantabria and La Rioja — have a lot of movement between them and authorities in each wanted similar closing hours, the Aragon health department press department said.

The restrictions are similar to those implemented last week in Catalonia — a region that includes the city of Barcelona, known for its busy nightlife — where authorities announced rules to close non-essential businesses by 1 a.m. They also imposed a curfew between 1 a.m. to 6 a.m. in towns with more than 10,000 residents where Covid-19 cases are high.

The measures combined put restrictions on nearly 14 million people, about 29% of Spain’s population.

There were 214,619 new Covid-19 cases since last Thursday, and officials have said the Omicron variant is rapidly gaining in Spain.

The Association of Flight Attendants has criticized the CDC's new isolation guidelines for those who test positive for Covid-19, saying it will be on the lookout for employees being pressured to return to work prematurely.

The CDC on Monday shortened the recommended times that people should isolate when they've tested positive for Covid-19 from 10 days to five days if they don't have symptoms — and if they wear a mask around others for at least five more days.

The association notes that the five-day period only applies to those who are asymptomatic.

“The CDC gave a medical explanation about why the agency has decided to reduce the quarantine requirements from 10 to five days, but the fact that it aligns with the number of days pushed by corporate America is less than reassuring," the association said in a statement.

Customers will not be able to browse at Apple's New York City stores as Covid-19 cases there rise. But they can buy products online and pick them up in person, Apple spokesperson Monica Fernandez said.

“We regularly monitor conditions and we will adjust both our health measures and store services to support the wellbeing of customers and employees," Apple said in a statement.

"We remain committed to a comprehensive approach for our teams that combines regular testing with daily health checks, employee and customer masking, deep cleaning and paid sick leave.”

Authorities in the Indian capital of New Delhi have put further Covid-19 restrictions in place, including a nightly curfew, after a surge in Omicron coronavirus cases over the past few days.

Delhi Chief Minister Arvind Kejriwal announced the measures Tuesday after the city registered two consecutive days of a positive testing rate above 0.5%, the threshold that triggers an alert to be issued.

A curfew between 10 p.m. to 5 a.m. will be implemented. Bars and restaurants will be restricted to 50% capacity, while the opening hours of stores in malls and markets will also be restricted. All health complexes, swimming pools, schools and colleges will be closed until further notice.

Despite the new measures, Kejriwal sought to keep the city's resident's calm.

“You do not have to worry. Firstly, the cases are mild and weak and secondly, your government is 10 times more prepared to handle the cases," he said.

India reported more than 6,300 new Covid-19 cases on Tuesday, the health ministry said. The country has also recorded 653 cases of the Omicron variant so far, of which 165 of those are in the wider state of Delhi.

More than 2,000 flights have been canceled globally so far on Tuesday, as the surge in Omicron causes huge disruption during one of the industry's busiest periods.

According to the tracking website FlightAware, 2,046 flights had been canceled as of 4.20 a.m. ET. More than 600 of them were either domestic US flights, or international flights flying in or out of the country. More than 2,000 other flights have been delayed.

Much of the disruption has been caused by staff calling in sick, several major airlines have reported.

Covid-19 numbers keep soaring as travelers scatter back across the country after Christmas and Americans prepare for another holiday weekend.

The US is now averaging more than 198,000 new Covid-19 cases each day, according to Sunday data from Johns Hopkins University. That's 47% higher than a week ago and the highest such number since January 19.

"I think we're going to see half a million cases a day — easy — sometime over the next week to 10 days," CNN medical analyst Dr. Jonathan Reiner told CNN on Sunday.

About 71,000 Americans were hospitalized with Covid-19 as of Sunday, according to the US Department of Health and Human Services.

With the highly contagious Omicron variant, "We're certainly going to continue to see a surge (in cases) for a while," Dr. Anthony Fauci told CNN on Monday.

Looking ahead to New Year's Eve on Friday, small gatherings of fully vaccinated people will be safe, Fauci said. But he advised people to avoid large parties where they don't know the vaccination status of all guests.

"When you are talking about a New Year's Eve party where you have 30, 40, 50 people celebrating, you do not know the status of the vaccination, I would recommend strongly: Stay away from that this year," said Fauci, the director of the National Institute of Allergy and Infectious Diseases.

"There will be other years to do that. But not this year." 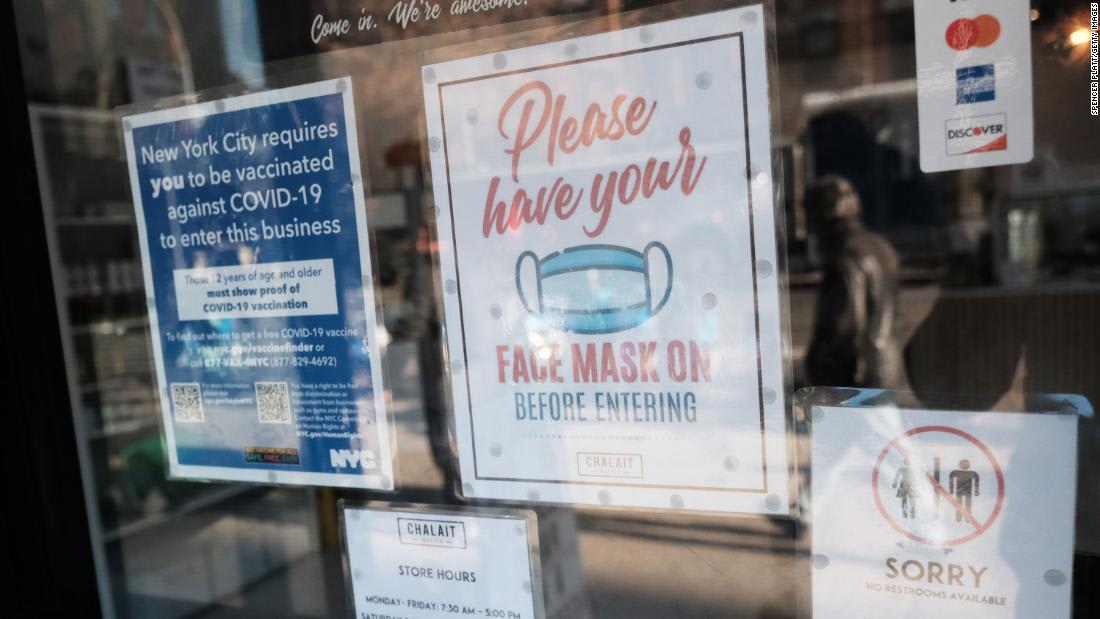 Xi'an has now recorded 810 locally transmitted cases since its cluster began on December 9, one of the worst localized outbreaks in China since Wuhan became the epicenter of the pandemic in 2019.

Xi'an, home to 13 million people, went into strict lockdown on December 23, closing public venues and transportation except essential services like supermarkets and hospitals.

It further tightened Covid control measures on Monday as local infections increased, requiring all residents to stay at home unless permitted to leave for mass testing.

Soldiers sent to help: State-run newspaper People's Daily said 150 military medics from the People’s Liberation Army Air Force were sent to Xi'an to assist in local hospitals on Monday, some with experience fighting the initial Covid-19 outbreak in Wuhan.

Official says outbreak is under control: While cases are expected to rise in the coming days, the Xi'an outbreak is under control, according to Wei Xiaoli of the city’s CDC. He told a Monday news conference that residents “don’t need to worry too much about the rapid increase of cases,” which have been uncovered by mass testing programs in the city.

According to the National Health Commission, China reported 182 locally-transmitted symptomatic cases on Monday — 180 of them in northwestern Shaanxi province, of which Xi'an is the capital.

One case each was found in southeastern Zhejiang province and southwestern Yunnan province.

Read more about the situation in Xi'an: 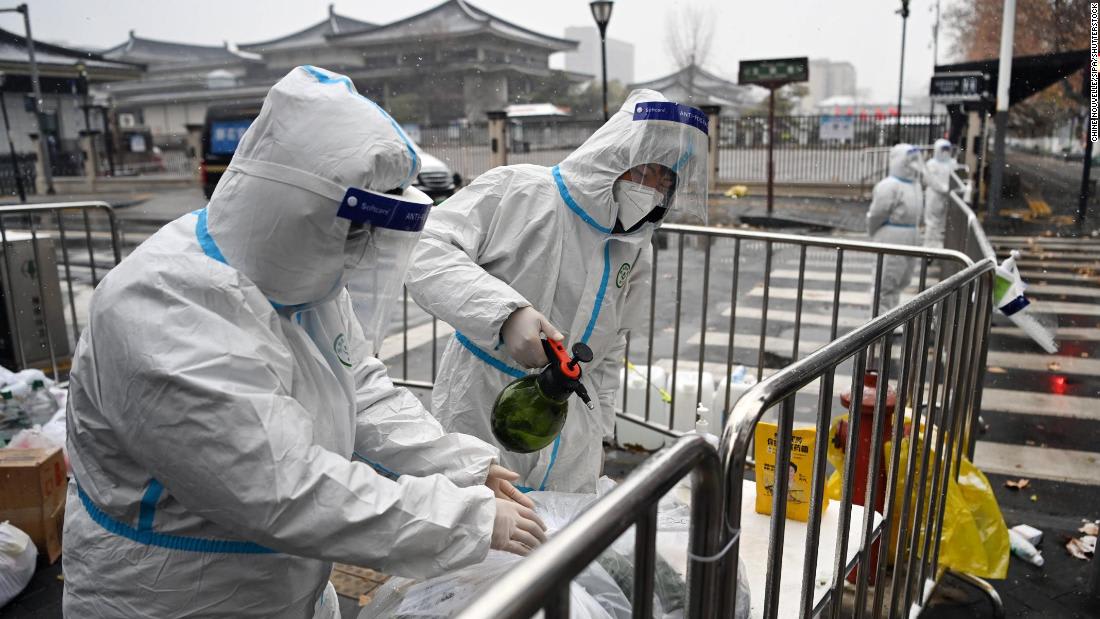