The latest on the coronavirus pandemic and Omicron variant

Suga, a member of BTS, has tested positive for Covid-19, the K-pop supergroup's label said.

He has no symptoms as of Friday, and is currently doing the “at-home treatment” in accordance with the country’s health guidelines, the label, BIGHIT Music, said in a statement published on a global fan community platform called Weverse.

Suga took a PCR test Thursday after returning from the US and went into quarantine before the results were returned, per South Korean entry policies. Since getting tested, Suga has not been in contact with other members of the band, the statement said. South Korea mandates all international travelers, including Korean nationals, quarantine for ten days regardless of their vaccination status.

Suga's result returned positive on Friday morning. Suga is fully vaccinated, having received two doses of the Covid-19 vaccine. He had tested negative before departing from the US. BIGHIT said it will provide full support for Suga’s speedy recovery while cooperating with the health authorities.

Grammy-nominated BTS is one world's most bands and boasts a loyal following of millions of fans from across the world. The group began touring in November after a two-year hiatus. Its members have been given a long vacation after finishing their scheduled events of "BTS Permission to Dance on Stage - LA" and the "2021 Jingle Ball Tour."

France's medical regulator has recommended shortening the interval between a person's last Covid-19 vaccine shot and when they can receive a booster.

"The current worrying epidemic context justifies an acceleration of the vaccination campaign by shortening the time between the primary vaccination and the booster dose," the High Health Authority (HAS) said.

The French government has not yet decided whether to accept the HAS recommendation. Boosters are currently eligible to adults in France five months after the last injection of a double-dose vaccine. Prime Minister Jean Castex announced December 17 government would reduce that gap to 4 months.

France reported 91,608 new Covid infections on Thursday, an all-time high since the beginning of the pandemic.

Modi spoke before hundreds of thousands of people on Thursday to announce development projects in his constituency of Varanasi in northern Indian state of Uttar Pradesh, but in videos from the event shared by Modi's office, few among the throngs of supporters were wearing masks. There appeared to be little social distancing.

Uttar Pradesh, India's most populous state is set to hold elections in early 2022. Although Modi has not held any election rallies yet in the state, he has been holding large gatherings, prompting concerns that lax attitudes toward Covid-19 could lead to another surge of cases with the Omicron variant looming.

Modi has made multiple appeals to the public to wear masks and get vaccinated. On Wednesday evening in a meeting with top government officials, he instructed authorities to ensure an adequate health infrastructure is in place to deal with any emerging challenges due to Omicron, his office said.

The national government has yet to put any restrictions in place on public gatherings, and is unlikely to do so. During the country's devastating second wave of Covid-19 cases, there was no nationwide lockdown. Modi deferred to state-level governments, and 35 of 36 of them put in place their own restrictions during that period.

As cases rise again, authorities in Uttar Pradesh announced a curfew would be put in place from 11 p.m. to 5 a.m. starting on December 25. Other cities like Mumbai, New Delhi and states like Karnataka, Madhya Pradesh have also announced covid protocols including limiting gatherings ahead of Christmas and New Year. There is currently no nationwide ban or limit on any kind of gatherings.

The federal government has not enacted any Covid-related restrictions within the country.

India on Friday reported 34,772,626 cases of Covid-19 since the beginning of the pandemic, which includes at least 236 cases of the Omicron variant and 479,133 deaths, according to the Indian Ministry of Health.

British Prime Minister Boris Johnson will urge the public to get their Covid-19 boosters in his Christmas message Friday,

"In his annual message to the nation, he will encourage the public to come forward for their booster -- as a gift not only to their families but the whole country," Downing Street said in a statement.

Johnson will also thank those involved in the vaccination campaign and urge the public to exercise caution over Christmas, as Omicron cases continue to rise.

More than 30 million people across the United Kingdom are vaccinated with a booster.

The UK reported 119,789 new Covid-19 cases on Thursday, the highest daily number since the start of the pandemic, according to government data. Earlier this week, Johnson said no further Covid-19 restrictions will be put in place before Christmas.

China’s government has reprimanded 26 Xi’an city officials for their handling of the latest Covid-19 outbreak, which has led to a lockdown of the city’s 13 million residents.

The officials were disciplined and publicly shamed for their “insufficient response to the epidemic control,” according to an announcement Friday by the Chinese Communist Party’s Central Commission for Discipline Inspection.

Among the officials, 10 were punished for their “lack of duty, sloppy execution and chaotic management that caused the outbreak in a quarantined hotel for overseas travelers,” the disciplinary body said.

Another four were punished for “lack of duty” in managing close contacts of Covid-19 patients.

With the holiday season and Beijing 2022 Winter Olympics approaching, China's zero-Covid strategy has faced challenges as multiple outbreaks have broken out across the country in recent weeks.

Local governments remain under huge pressure to keep the virus at bay as a political priority, and officials across most impacted cities have been punished because of Covid-19 outbreaks.

The historic city of Xi’an — known internationally as the home of the 2,000-year-old Terracotta warriors — reported 49 new locally-transmitted cases Friday. That brings the Xi'an cluster to 255 cases since the outbreak began on December 9.

Christmas travel plans for many Australians were thrown into chaos on Friday after dozens of domestic flights to and from Sydney were canceled.

The domestic airlines that fly to and from Sydney are Qantas, Jetstar, Virgin, and Rex.

Rex said none of their domestic flights have been canceled Friday.

A Jetstar spokesperson attributed the late cancellations to “a large number of our frontline team members” being "required to test and isolate as close contacts." Jeststar did not comment on the number of flights canceled.

The airline apologized for impacting customers' travel plans and said they have rescheduled the majority of passengers onto later flights.

A spokesperson for Virgin Airlines said one Virgin Australia flight was canceled on Friday, with other schedule changes made earlier in the week.

The airline apologized for the late schedule changes but assured "all guests" will arrive at their "final destination" by the end of Friday.

A Qantas spokesperson said the airline rescheduled some of their domestic flights over the past two weeks in accordance with demand.

South Korea reported a record number of critically ill Covid-19 patients for the third day in a row, according to the Korea Disease Control and Prevention Agency (KDCA).

Some 1,084 patients were in the ICU as of Thursday, the KDCA said.

Australia's Queensland state reported 589 new Covid-19 cases on Friday, its highest number of daily infections since the start of the pandemic.

Cases have risen quickly in the state over the past week -- Queensland recorded just 86 infections on Tuesday.

Queensland’s Chief Health Officer John Gerrard said he was expecting Covid numbers “to grow very substantially” over the course of the next few weeks.
A “very small proportion of people” are getting sick, he said, but warned because of the contagious nature of Omicron, “there will be some strains on the hospitals."

Queensland reopened its borders on December 13 leading up to the holiday season.

According to Health Minister Yvette D’Ath, over 90% of Queenslanders have received their first dose of the Covid vaccine.

Meanwhile, the state of New South Wales reported 5,612 new daily cases on Friday, a slight dip from yesterday’s high of 5,715.

The US Food and Drug Administration on Thursday authorized Merck's antiviral pill, molnupiravir, to treat Covid-19.

This is the second Covid-19 antiviral pill authorized for ill people to take at home, before they get sick enough to be hospitalized. Merck has an agreement with the US government for the company to supply 3.1 million courses of molnupiravir upon this authorization.

An FDA news release said the pill is authorized "for the treatment of mild-to-moderate coronavirus disease (COVID-19) in adults with positive results of direct SARS-CoV-2 viral testing, and who are at high risk for progression to severe COVID-19, including hospitalization or death, and for whom alternative COVID-19 treatment options authorized by the FDA are not accessible or clinically appropriate."

Molnupiravir was narrowly recommended by the FDA's advisers in a 13-10 vote at the end of November after data showed it cut the risk of hospitalization or death by 30% among high-risk adults. This was lower than an earlier analysis suggesting that number could be about 50%.

Dr. Eliav Barr, senior vice president of global medical affairs at Merck, told CNN this month that he was optimistic this treatment would work against the Omicron variant.

"The Omicron variant is primarily different from the other types of Covid at the spike protein. Our drug works in completely different part of the virus. So we're very optimistic that the drug will continue to be effective against Omicron, and we're studying that right now."

Pfizer pill: On Wednesday, the FDA authorized Pfizer's antiviral pill, Paxlovid, to treat Covid-19, the first antiviral Covid-19 pill authorized in the US for ill people to take at home, before they get sick enough to be hospitalized. High-risk individuals age 12 and older who weigh at least 88 pounds and have a positive SARS-CoV-2 test are eligible for this treatment and will need to have it prescribed by a doctor.

The pill "should be initiated as soon as possible after diagnosis of Covid-19 and within five days of symptom onset," according to an FDA statement.

Read more about the treatments: 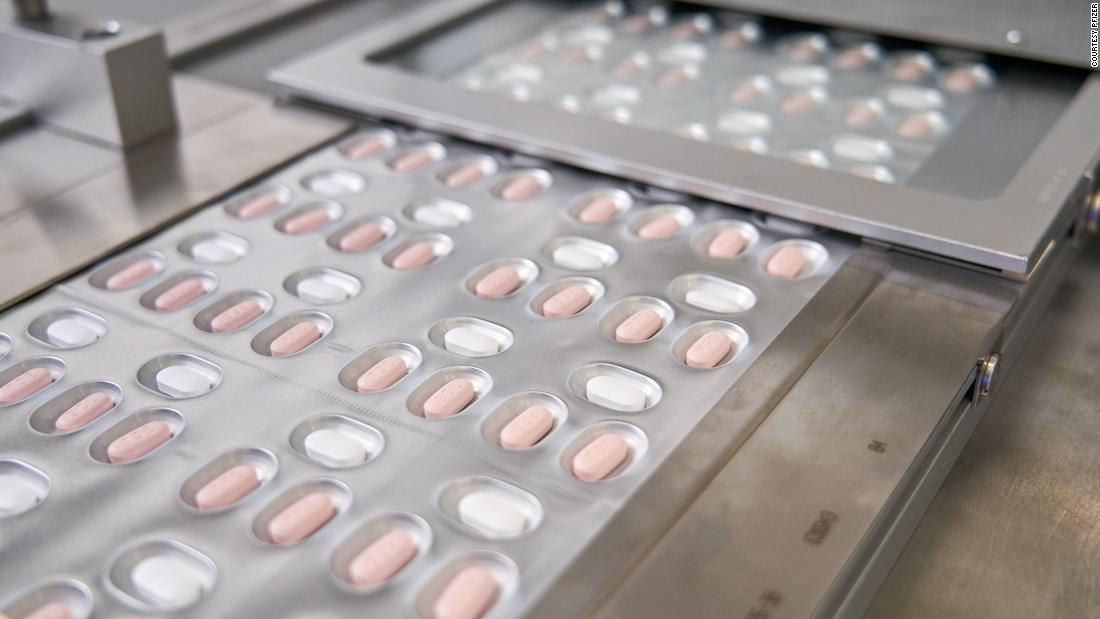