As the Biden administration continues to battle the Omicron variant and push for vaccinations, latest US data shows cases and hospitalizations are trending downward.

New movements on vaccines could also soon expand who is eligible to get the shot. The White House said it is ready to "hit the ground running" to vaccinate children age six months to 5 years old as soon as Pfizer/BioNTech receives emergency use authorization for its Covid-19 vaccine for that age group.

Here's a look at the latest US Covid-19 figures:

Here's a look at how cases have changed over time: 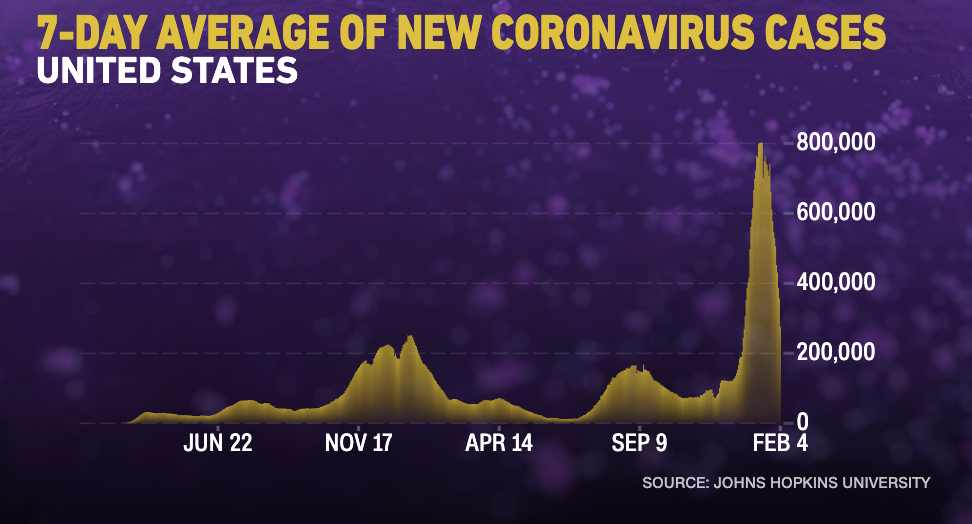 America's jobs recovery got an unexpected boost in January despite the Omicron variant spreading rapidly throughout the country.

The economy added 467,000 jobs last month, significantly better than most economists had expected.

The unemployment rate rose to 4%, the first increase in the jobless rate since June 2021.

Spain will end its requirement to wear masks outdoors to protect against Covid-19 next week, Health Minister Carolina Darias said Friday in an interview.

“Next Tuesday, we will bring a decree to the prime minister’s cabinet meeting to eliminate the obligatory use of masks outdoors,” Darias told Spain’s SER radio.

It’s expected to take effect by Feb. 10, she added.

The government reimposed the mask mandate last December just before Christmas as new Covid-19 cases were spiking from the Omicron variant, she said.

But for the past several weeks, all the Covid-19 “indicators are improving, especially concerning the circulation of the virus” and the coronavirus patient load on hospital beds and in intensive care wards has declined, too, Darias said.

Spain last month reported its highest number of Covid-19 cases, with 372,766 reported on Jan. 3, according to Johns Hopkins University data. That number has dropped to 74,368 in the past 24 hours.

The government said the mask mandate would be in place “only for the strictly necessary amount of time,” Darias said.

The first shipment of 10,000 doses of Paxlovid, Pfizer’s oral antiviral pill, hit the French market on Friday, according to the French health ministry.

“Paxlovid can be prescribed by any physician for early access. It will be available in city pharmacies and in hospital pharmacies,” the ministry said in a statement released on Wednesday.

The French medical regulator, the High Health Authority, green-lit the pill on Jan. 21. The European Medicines Agency followed suit on Jan. 28, giving it conditional marketing authorization across the union.

Paxlovid can cut the risk of hospitalization or death by almost 90% if given to high-risk adults within a few days of their first symptoms, according to data announced by Pfizer.

France is the first country in the European Union to make the medication available, but it’s not the only one in the market. Germany announced it placed an order for one million doses of Paxlovid at the end of 2021.

Schools in New Delhi — which have been shut for more than 600 days due to the pandemic — will reopen in February, Deputy Chief Minister Manish Sisodia said after a meeting with the Delhi Disaster Management Authority on Friday.

Schools first shut in the national capital territory on March 1, 2020, because of the pandemic. Many were allowed to reopen on Nov. 1, 2021, but were again shut just 16 days later due to high pollution levels. As schools began to reopen in November and early December, India's third Covid-19 wave forced them to again close.

Grade 9-12 classes will continue in hybrid mode starting on Feb. 7.

“Slowly, we will move towards a stage where hybrid classes can be discontinued and only physical classes/offline classes take place,” Sisodia said.

Teachers for nursery school to grade 8 should all be vaccinated, and all colleges have been asked to run classes completely offline, Sisodia added.

Apart from the decision to reopen schools, Sisodia said all gyms, spa and swimming pools shall be allowed to open and government offices can open at 100% capacity.

New Delhi will continue to have a night curfew; however, its timings have been pushed back by an hour, from 11 p.m. to 5 a.m. local time.

For the first time, the US Centers for Disease Control and Prevention will publish data that looks at how much coronavirus is turning up in the country’s wastewater. It will add this testing data to its Covid-19 dashboard.

The National Wastewater Surveillance System monitors wastewater for disease in 19 states. Tests show that there’s been a decrease in the amount of virus at two-thirds of the NWSS’s 400 sites from levels measured 15 days ago, according to a CDC official familiar with the planning.

More than 500 sites will begin submitting data in the coming weeks, the CDC says. A media briefing on the surveillance system is scheduled for Friday.

The sites are not all testing daily, but because studies show that about 80% of people with Covid-19 shed viral DNA in their feces, this kind of data is considered a good indication of exactly how much disease is in a community. It’s highly sensitive and can pick up the presence of the virus when only one person in 100,000 in an area is infected. It’s also an early indicator, since it doesn’t rely on people to feel sick and seek out a test — or even to have symptoms at all.

It takes five to seven days after a toilet flushes to get data on the wastewater, and the samples typically turn positive four to six days before clinical cases show up, according to the CDC.

“As long as people are using a toilet that's connected to a sewer, we can get information on those cases in that community,” said Dr. Amy Kirby, a CDC microbiologist who leads the National Wastewater Surveillance System project.

To avoid direct comparisons, Kirby says, the dashboard will compare each site to its past results. The main metric will be the percent change concentration at the site over the past 15 days. The other metric people will be able to see is how many detections there were over those 15 days — how many samples tested positive at all.

The Beijing Olympic Committee has reported 21 new Covid-19 cases among Games-related personnel as of Thursday, it said in a statement Friday ahead of the Opening Ceremony.

Since the “closed-loop” system officially began on Jan. 23, a total of 308 Olympic-related Covid-19 cases have now been identified, 111 of which involve athletes or team officials.

Of the 21 new cases, 14 were detected among new airport arrivals and seven from those already inside the “closed-loop” system, which separates Olympic athletes, stakeholders, and staff from the public.

Nine of the 21 cases involved athletes or team officials, two of which were already inside the “closed loop.”

A total of 670,186 Covid-19 tests have been administered inside the “closed-loop” system since Jan. 23, and 11,963 people have arrived in Beijing, the statement added.

Meanwhile, Beijing reported only one case of Covid-19 on Thursday, which was found in a medical worker, authorities announced Thursday evening.

It brings the total number of cases reported in Beijing since Jan. 15 to 116, according to a CNN tally.

The person, who was not identified by authorities, had worked recently at the Beijing Ditan Hospital's emergency quarantine section. The person is currently in isolation and the hospital has suspended outpatient services since Thursday morning, authorities said.

Hundreds of Covid-19 tests for people working in the hospital and environmental samples have been negative, according to the statement.

Austria became the first country in Europe to introduce a national Covid-19 vaccine mandate for adults on Friday after President Alexander Van der Bellen signed it into law.

Austria's sweeping measures will see those without a vaccine certificate or an exemption potentially slapped with initial fines of 600 euros (or about $680). Checks to see if the mandate is being adhered to begin March 15.

Pregnant people and those who cannot be vaccinated without endangering their health are exempt from the law, according to the Austrian Health Ministry's website.

The exemption also applies to people who recently caught Covid-19, and lasts 180 days from the date they received their first positive PCR Covid-19 test.

The new law will last until Jan. 31, 2024, and could see unvaccinated people face a maximum fine of 3,600 euros ($4,000) up to four times a year if they are not on a vaccine register by their assigned vaccination date.

German Chancellor Olaf Scholz is pushing for a vaccine mandate as part of the country's Covid-19 containment strategy, and a key vote on a potential vaccine mandate is expected at the end of March. 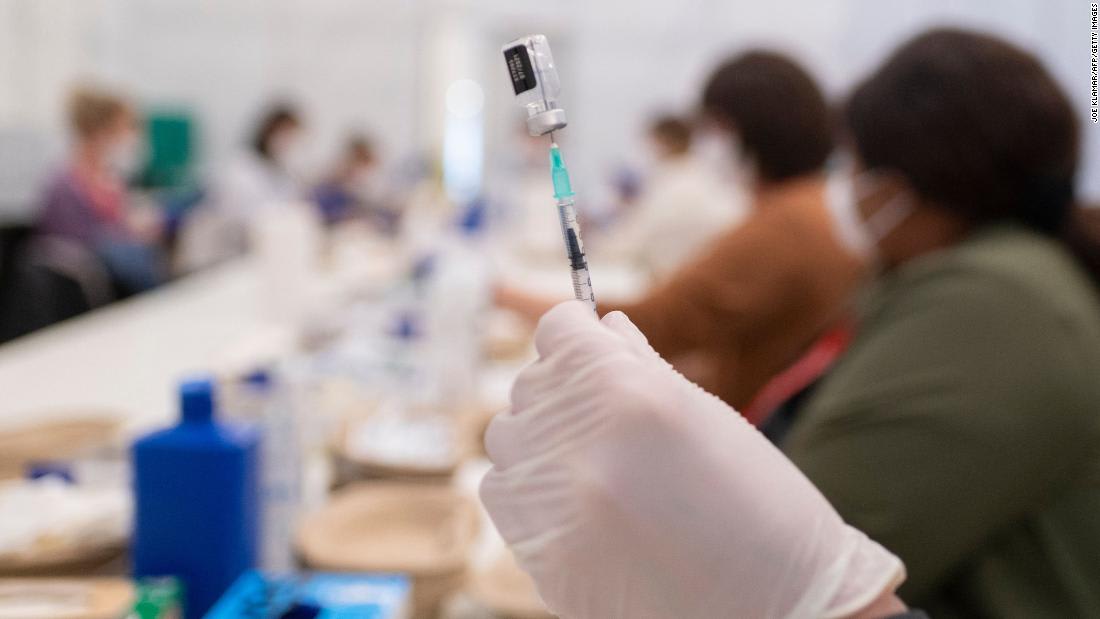