The National Institutes of Health Covid-19 treatment guidelines no longer recommend the use of two authorized monoclonal antibody treatments for patients with mild to moderate Covid-19 due to their diminished effectiveness against the Omicron variant.

The two monoclonal antibody treatments no longer recommended are Eli Lilly’s bamlanivimab plus etesevimab and Regeneron’s casirivimab plus imdevimab.

“Because Omicron has become the dominant VOC in the United States and real-time testing to identify rare, non-Omicron variants is not routinely available, the Panel recommends against using bamlanivimab plus etesevimab or casirivimab plus imdevimab (AIII),” said the updated NIH guidelines, published Wednesday.

NIH is still recommending the use of GlaxoSmithKline’s monoclonal antibody, sotrovimab, as a single IV infusion administered as soon as it can be within 10 days of symptoms appearing for those over the age of 12.

“The Omicron VOC has become the dominant variant in the United States and is predicted to have markedly reduced susceptibility to bamlanivimab plus etesevimab and casirivimab plus imdevimab,” said the NIH statement. “In vitro studies indicate that sotrovimab remains active against the Omicron VOC.”

In December, the Assistant Secretary for Preparedness and Response and the US Food and Drug Administration paused allocations of the Eli Lilly and Regeneron monoclonal antibodies as data showed it was unlikely they would help against Omicron.

The lawsuit, filed Wednesday in Hennepin County district court, alleges that the Minnesota Department of Health received complaints after people were tested for Covid-19 at pop-up testing sites around Minnesota operated by Center for Covid Control reported never receiving their rapid antigen test or PCR test results from the company’s associated lab, Doctors Clinical Laboratory, or received results much later than the time the companies promised.

In other instances, the lawsuit alleges, some people reported receiving results that were “riddled with inaccurate and false information including listing the wrong test type and false dates and times for when samples were collected from consumers” while other people received negative Covid-19 test results when they hadn’t even submitted samples to be tested.

The suit claims the companies violated Minnesota’s consumer protection laws, including instructing their employees to tell people who called about late test results that the results were coming in 24 hours, “even if the employees had no idea where the sample was or if the lab,” and to “falsely tell consumers that the test result had been inconclusive and that they needed to take another test,” if they called multiple times.

CNN did not immediately receive a response from the two Illinois-based companies, Center for Covid Control or Doctors Clinical Laboratory, when reached for comment.

“My job is to fight for Minnesotans’ security and help them live with dignity, safety, and respect. Making sure that Minnesotans have accurate tools to [keep] them safe from the COVID-19 pandemic is a key part of that job,” Ellison said in a statement announcing the lawsuit.

Last week, CCC announced it would be pausing operations from Jan. 14 until Jan. 22, because “unusually high patient demand has stressed staffing resources, as has been widely reported, in a subset of our locations, affecting our usual customer service standards and diagnostic goals.”

“Center for Covid Control is committed to serving our patients in the safest, most accurate and most compliant manner. Regrettably, due to our rapid growth and the unprecedented recent demand for testing, we haven't been able to meet all our commitments,” CCC founder and CEO Aleya Siyaj said in the announcement.

India reported 317,532 new Covid-19 cases on Thursday, according to Johns Hopkins University data, surpassing the 300,000 mark for the first time in this recent wave.

The last time cases surpassed this milestone was during the country's devastating second wave in April and May, which was fueled by the Delta variant.

Within India, the state of Maharashtra has reported 43,697 new cases. Delhi has reported 13,785, a decline that is believed to be due to lower rates of testing.

Meanwhile, some states are seeing a rise in cases, including Karnataka and Tamil Nadu in the south, Uttar Pradesh in the north and the eastern state of West Bengal.

The number of deaths rose by 491, according to JHU.

A Czech folk singer who was opposed to having a coronavirus vaccine has died after deliberately contracting the virus, according to her son.

Hana Horká, of the folk band Asonance, died Sunday at the age of 57 after intentionally exposing herself to the virus at home while her son and husband were sick, according to CNN affiliate CNN Prima News.

Horká wanted to infect herself so she could be "done with Covid," her son, Jan Rek, told Prima News on Monday.

"I came here because the debate is very important and I want to warn people," said Rek, who added that both he and his father had been vaccinated.

"My mom wanted to get sick so she gets the Covid pass," Rek said. "She said to me and even publicly she wants to get infected so she is done with Covid."

Rek said his mother was getting incorrect information about the virus "from her social circle."

Horká was "ignoring on purpose some facts and comments that were disproving her arguments," added Rek. "She wanted to get sick on purpose," he said.

"She was living by even at times unrelated information concerning health in general but there has always been this underlying thought that nature will take care of everything and only we know ourselves the best," he said.

"It wasn't somehow extreme at home. She was always open to a choice and wasn't extremely against vaccination," Rek said. 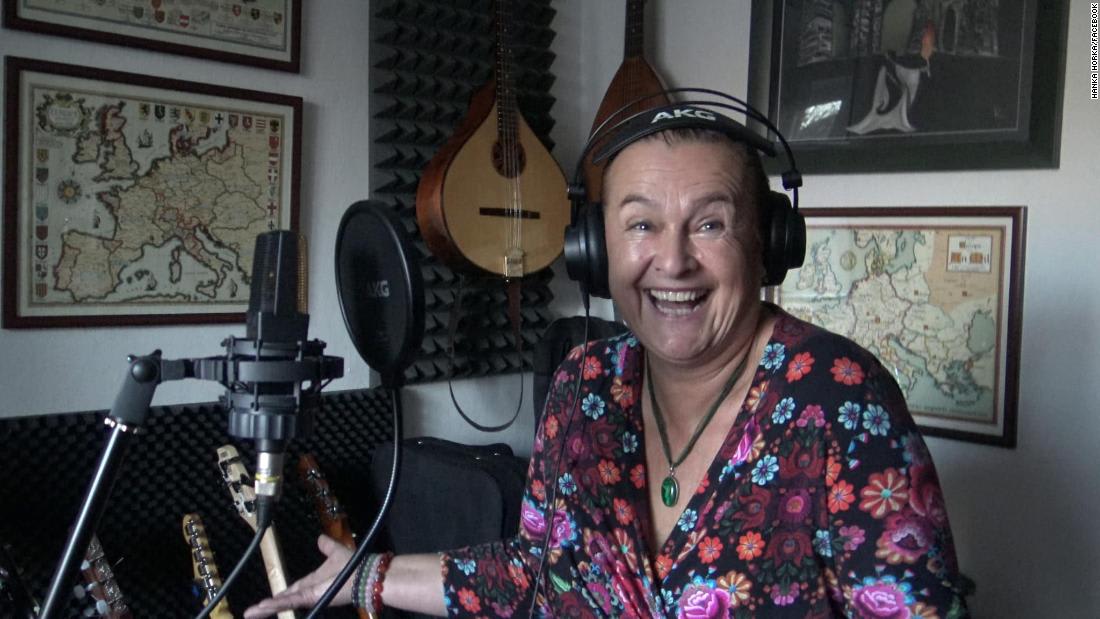 Germany hit its highest-ever daily number of Covid-19 cases since the start of the pandemic, according to data from Johns Hopkins University.

The number of people admitted to hospitals, however, is declining. On Wednesday, the German Interdisciplinary Association for Intensive Care and Emergency reported that 2,571 people are currently being treated for Covid-19 in the country's intensive care units. Last Wednesday, that number stood at 2,959.

Around 73% of the German population has now been fully vaccinated against Covid-19, and 48% have received a booster shot, according to the country's Robert Koch Institute.

Hong Kong has so far culled more than 1,200 small animals amid fears of Covid-19 transmission, the city's Agriculture, Fisheries and Conservation Department told CNN on Thursday.

This comes after Hong Kong authorities said on Tuesday they will euthanize around 2,000 small animals, including all pet shops' hamsters, after a worker and 11 hamsters at the Little Boss pet shop — located in Hong Kong's busy Causeway Bay district — tested positive for the coronavirus.

As of Wednesday evening local time, the AFCD said it has culled 1,213 small animals from both the pet shop and the company's warehouse.

Among the animals, 97 were ​euthanized at the pet shop, including 69 hamsters, 21 rabbits and seven chinchillas. Another 1,116 small animals, including 138 rabbits, 861 hamsters, 31 chinchillas, 81 guinea pigs, three white rats and two golden hamsters, were euthanized in its warehouse in the Tai Po district.

The AFCD said they have taken 511 samples from the small animals in the Tai Po storehouse, and testing is underway.

Hamsters in other pet shops are expected to be euthanized by the end of the week and authorities are assessing the financial impact on pet shops, the AFCD added.

In a press release on Wednesday, Hong Kong authorities also "strongly advised" people who purchased hamsters after Dec. 22, 2021, to hand over their animals to be tested and euthanized.

The AFCD said that as of 5 p.m. Wednesday local time, it received more than 60 hamsters from pet owners.

rsident Biden held a news conference on Wednesday to mark the one-year anniversary of his administration. He touted the progress he made so far and discussed the challenges ahead.

The conference came as his administration struggles to contain the latest surge of the Omicron coronavirus variant and works to ease the economic anxiety gripping the nation.

Biden acknowledged the challenges facing his administration as he enters his second year in office. He said there continues to be "frustration and fatigue in this country" over Covid-19, reiterating that "while it's cause for concern, it's not cause for panic."

The President conceded that his team should have done more to ramp up testing, but listed steps he's taken to make kits more available, arguing that "we're in a better place than we have been thus far, clearly better than a year ago."

"I'm not going to give up and accept things as they are now. Some people may call what's happening now the new normal. I call it a job not yet finished. It will get better. We're moving toward a time when Covid-19 won't disrupt our daily lives," he added.