Our live coverage has ended. Read more about the pandemic here.

Dr. Rochelle Walensky, director of the US Centers for Disease Control and Prevention, shared some of the agency’s new data on US Covid-19 hospitalizations on Twitter Tuesday.

Walensky broke down the monthly rates of Covid-19-associated hospitalizations among unvaccinated, noting that rates "were higher than vaccinated in all age groups."

According to a Tuesday news release, the Cabinet will meet Wednesday morning to review the latest Covid-19 data and Plan B measures, followed by an update to parliament in the afternoon.

Plan B regulations are set to expire on Jan. 26. The British government committed to reviewing them ahead of this date.

“Decisions on the next steps remain finely balanced,” a government spokesperson said.

“The Omicron variant continues to pose a significant threat and the pandemic is not over. Infections remain high but the latest data is encouraging, with cases beginning to fall,” the spokesperson said.

“Plan B was implemented in December to slow the rapid spread of the extremely transmissible Omicron variant, and get more jabs in arms. It’s thanks to the phenomenal efforts of the NHS and many dedicated volunteers that we have now delivered over 36 million boosters to people across the UK,” the spokesperson also said.

Plan B was introduced in Dec. 8, 2021. It made face coverings mandatory again in most public venues, including cinemas; included a recommendation to work from home and mandated a "Covid Pass" proving vaccination or recent recovery in order to enter nightclubs and other venues with large crowds.

Here’s the latest data on vaccination efforts in the United States, published Tuesday by the US Centers for Disease Control and Prevention:

Here's a look at the seven-day average of new vaccine doses administered over time, according to the CDC: 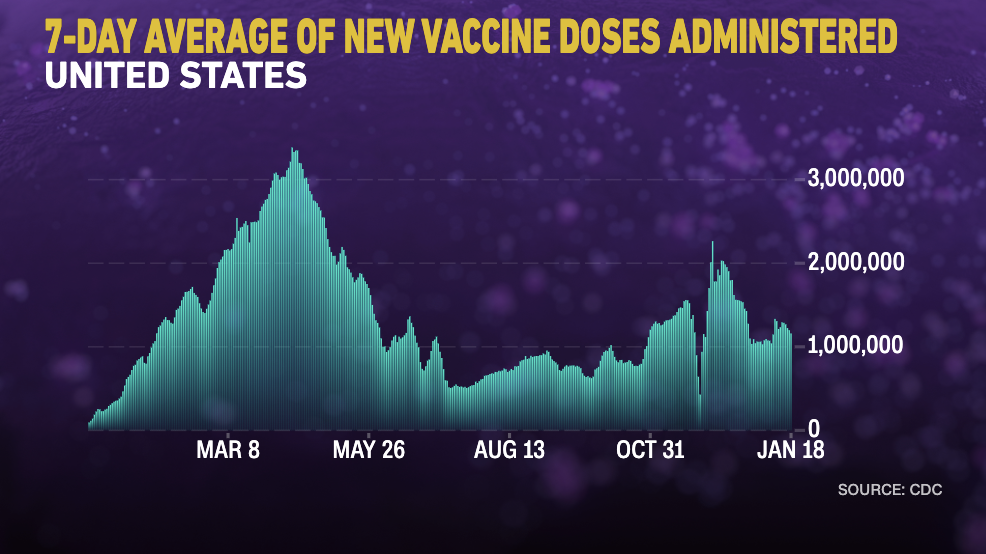 Pfizer on Tuesday shared results from three lab studies that suggest its antiviral Paxlovid is effective against the Omicron variant.

“Taken together, these in vitro studies suggest that Paxlovid has the potential to maintain plasma concentrations many-fold times higher than the amount required to prevent Omicron from replicating in cells,” the company said in a news release.

One study tested nirmatrelvir, an antiviral in Pfizer’s drug, against an enzyme from several variants that the virus needs in order to replicate. In all cases, Pfizer said, nirmatrelvir was a “potent inhibitor of its target.”

In another study, the drug was tested against several variants of concern, and its response to Omicron was in line with those observed for other variants.

A third study, conducted with the Icahn School of Medicine at Mount Sinai, found that a similar concentration of nirmatrelvir was needed to inhibit infection from Omicron.

"These data suggest that our oral COVID-19 therapy can be an important and effective tool in our continued battle against this devastating virus and current variants of concern, including the highly transmissible Omicron," said Dr. Mikael Dolsten, Pfizer’s chief scientific officer. "We will continue to monitor the treatment’s activity in real-world settings and believe that these in vitro findings will continue to be validated."

The US Food and Drug Administration gave Paxlovid emergency use authorization last month to treat mild to moderate Covid-19 in people 12 and older who are at high risk of severe disease. Pfizer previously released results that showed the treatment cut the risk of hospitalization or death by 89% if given to high-risk adults within a few days of their first Covid-19 symptoms.

The Grammy Awards have a new date and location.

Originally set to take place later this month in Los Angeles but postponed due to the pandemic, CBS and the Recording Academy announced Tuesday that the music event will move to Las Vegas and will take place on Sunday, April 3, one week after the Academy Awards.

“We are excited to take the Grammys to Las Vegas for the very first time, and to put on a world-class show,” Harvey Mason Jr., CEO of the Recording Academy, said in a statement. “From the moment we announced the postponement of the original show date, we have been inundated with heartfelt messages of support and solidarity from the artist community. We are humbled by their generosity and grateful for their unwavering commitment to the Grammy Awards and the Academy’s mission."

The CMT Music Awards, a show in which fans vote for their favorite country music artists, was supposed to take place on April 3. That event will move to a later date and air on CBS, according to the network.

The Grammy Awards will take place at the MGM Grand Garden Arena with "The Daily Show" host Trevor Noah as the night's master of ceremonies.

A survey of employers in Manhattan found that 75% of them delayed their return to the office because of the increase in the number of Covid-19 cases caused by the Omicron variant, according to the Partnership for New York City, a nonprofit membership organization of more than 300 business leaders.

The survey, taken between Jan. 10 and 18, noted that 22% of companies are currently unable to provide an estimate of when office attendance will exceed 50%, with several saying that increased office attendance is contingent on a decline in Covid-19 cases.

Yet 61% of employers expect average daily attendance in their Manhattan offices will exceed 50% by end of the first quarter of the year.

The survey also found that due to the Omicron variant, one-third of companies reinstated mask mandates, and one-fourth of the companies closed their offices to nonessential employees.

On vaccines, the survey found that only 12% of companies would require that all employees are vaccinated and have received a booster shot by a specific date.

One-third of the respondents in the survey are in the financial services industry.

Pfizer CEO Albert Bourla has said the company’s variant-specific vaccine could be ready in March, and Moderna CEO Stephane Bancel says the company plans to have its clinical trial results around March.

"We're really going to have to see the evidence on the vaccines before any decisions are made about what would be the best way to use the vaccines," O'Brien said.

The US Centers for Disease Control and Prevention added 22 destinations to its highest-risk category for travel on Tuesday, including Australia, Argentina and Egypt.

Twenty-two destinations were also added on Tuesday to Level 3, which is the CDC’s “High” risk category. The Level 3 category applies to destinations that have had between 100 and 500 cases per 100,000 residents in the past 28 days.

The adoption of a health pass saved close to 4,000 lives in France, 1,100 in Germany and 1,300 in Italy, between the time the three countries adopted a health pass and the end of 2021, according to a study published Tuesday by the French Council of Economic Analysis, an independent body that advises the government.

A health pass requires full vaccination, proof of recovery or a negative Covid test mandatory in bars, restaurants, theaters and other entertainment venues. France and Italy announced the measure in July of last year and Germany in August.

“Notably, the application of health pass substantially reduced the pressure on intensive care units (ICUs) and, in France, averted surpassing the occupancy levels where prior lockdowns were instated,” the study says.

One main driver behind this is the positive effect health pass had on vaccination rates across the three countries. It boosted vaccination rate in France by roughly 13%, in Germany by 6.2% and in Italy by 9.7%, according to the model estimates.

The French Constitutional Court is set to rule on a new bill on January 21, that will turn the country’s health pass into a vaccination pass, meaning proof of vaccination is necessary for access to a range of everyday activities, from entering restaurants and bars to traveling inside the country. It would no longer accept proof of a negative test or recent recovery from Covid.

Italy in December made a "super green pass" mandatory in bars, restaurants, theaters and other closed entertainment venues, which was an extension to the country's green pass, which requires full vaccination, proof of recovery or a negative Covid test. As opposed to the normal green pass, the "super green pass" does not accept a negative test in lieu of the vaccine — a move by the government to encourage more people to get vaccinated.