Our live coverage of the Omicron coronavirus variant has moved here.

"The optimist in me would say that maybe we find out over the coming few weeks as we generate more data in the real world, that the vaccines actually hold up quite well," he said.

Hoge was responding to Moderna CEO Stéphane Bancel remarks on Tuesday in which he suggested current vaccines might struggle with Omicron.

"There is no world, I think, where [the effectiveness] is the same level . . . we had with [the] Delta [variant]," Bancel said in an interview with the Financial Times. "I think it's going to be a material drop. I just don't know how much because we need to wait for the data. But all the scientists I've talked to ... are like, 'This is not going to be good.'"

Hoge took issue with Bancel's word choice, but acknowledged this evening that it is likely the current vaccines could be less effective against Omicron.

"I think some of the word choice may not have been optimal," Hoge told CNN's Dr. Sanjay Gupta. "But I think what Stéphane Bancel was trying to say was consistent with what he said — and what we feel, which is it seems likely that the Omicron variant is gonna make a dent in our vaccine efficacy. In fact, in all vaccine efficacy."

Dr. Stephen Hoge, president of Covid-19 vaccine maker Moderna, said during CNN's town hall tonight that if vaccines hold up against Omicron, they could provide benefit against future strains of the virus that have significant mutations.

"This particular Omicron variant is the first one that really causes us significant concern because of the number of mutations it has, but a lot of this is just we don't have data yet, so the concern is more anticipatory," Hoge said.

Looking at the history of Covid-19 vaccines, Hoge said they have had good efficacy against previous variants, including Gamma, Beta and the Delta variant that became the dominant strain earlier this year.

"There is some hope if we get through the Omicron variant, we see good efficacy in the coming weeks and months that actually the original vaccines that we've all been benefitting from may hold up well and might be all we need in the long run. We'll just need data to tell us," he said.

Dr. Anthony Fauci, the chief medical adviser to President Joe Biden, said Wednesday that with the emergence of the Omicron coronavirus variant, Americans are still safe to travel and would not suggest anything different from previous safety recommendations.

"We just have a problem that's identifiable now, and just as I said, and I'll say it again, if you have a vaccinated situation, your family's vaccinated, enjoy the holidays, indoor with your family in a family setting," Fauci told CNN at a town hall.

"Many of us will have to travel during the holidays," Fauci added. "What you do when you travel, you take care. Travel always increases somewhat the risk of getting infected, but if you wear a mask, particularly when you're in an airport in the congregate setting you have to wear a mask when you get on the plane, and if you can, just get vaccinated as soon as you can, and right now is the time to get boosted."

Dr. Anthony Fauci said Americans should not lose sight of the dangers of the Delta variant even as the Omicron strain of coronavirus dominates headlines.

"We don't want people, because they hear of a single case of a new variant, that just has now arrived in the United States ... to take our eye off the ball of the problem that we are facing right now," said Fauci during CNN's town hall tonight.

Fauci urged the 60 million Americans who remain unvaccinated to get their shots as quickly as possible since it is proven to lower the transmission and dangers of the Delta variant.

"We still have 99.9% of the isolates are Delta, and we know what we can do with Delta," he said. "We have, within our capability, to block it by getting the people who are unvaccinated vaccinated."

Fauci added that Americans ought to take other precautions as well, such as wearing masks, as colder weather settles on much of the country.

It is too early to tell whether people will need to receive a Covid-19 vaccine each year to protect against infection, Dr. Anthony Fauci told CNN's Anderson Cooper during the company's town hall Wednesday evening.

"Anderson, to be honest with you, we don't know. We really don't. You could say we might have this or we might require this, but we don't know," Fauci said. "One of the things I'm very interested in and my colleagues, is that when you get a boost, the booster shot for example with an mRNA or a Pfizer, do you not only elevate the level of antibodies to a high level but do you induce a degree of affinity maturation which is a big word to mean that you really get the immune response to get a much greater breadth and a much greater strength so that we maybe don't have to boost every eight months, nine months. It may be we get a durability of immunity. Or maybe not, and if it is not, we'll have to deal with it depending upon how the outbreak and the global pandemic evolves."

Fauci added: "So the honest answer is we don't know what's going to be required. I hope we get a durability protection from the boost that we won't have to be chasing all the time against the new variant. But that just remains to be seen."

Dr. Anthony Fauci said he "felt really badly" about the US travel ban imposed on South Africa and other southern African countries following the detection of the Omicron variant.

Dozens of countries around the world have imposed temporary travel bans on several countries in southern Africa. While the Omicron variant was first detected in South Africa, it doesn't mean it necessarily originated in the country.

"It was a very difficult choice to make because we had no idea what was going on when you saw what was coming out, so we felt it was better to be safe than sorry," Fauci said during CNN's town hall, answering a question from a viewer.

"I would hope that we'd get enough information soon that we could pull back on that as quickly as possible because you don't want individual countries to feel that when they are honest and transparent that there are negative consequences for them. So I do really feel badly about that."

The Biden administration will extend existing requirements for travelers to wear masks on airplanes, buses, trains and boats, as well as in airports and other transportation hubs, through March to address concerns over the Omicron coronavirus variant.

In August, the Transportation Security Administration extended its US federal transportation mask mandate through January 18 due to concerns at that time over the Delta variant.

Reuters was the first to report on the mandate extension. 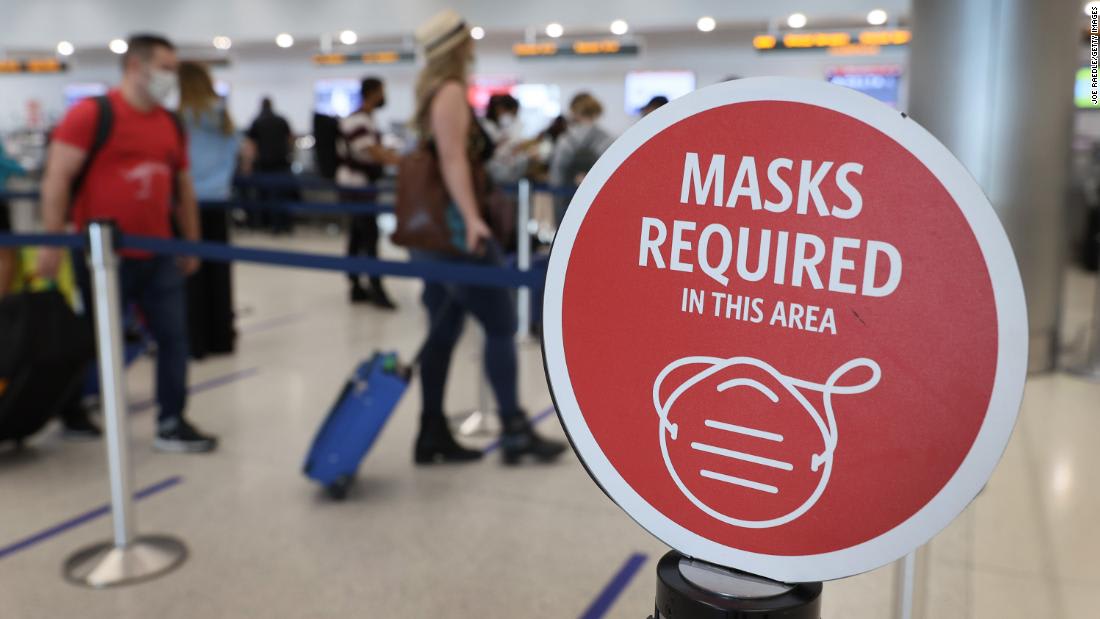 Dr. Anthony Fauci, director of the National Institute of Allergy and Infectious Diseases, said during a CNN town hall tonight that laboratory data on the Omicron variant should be available in a few weeks but real world data is still unknown.

"We'll get the laboratory data in a couple of weeks, but we'll have to get the experience from our South African colleagues about what the real clinical effect is going to be," Fauci said.

"One of the things that's going to happen in the next couple of weeks ... is that we're going to get the virus, which we have, and you grow the virus or you make what's called a pseudo virus which is a form of virus you can work with in the test tube very easily. Then we're going to get sera from people who have recovered from Covid as well as individuals who have been vaccinated and who have developed different types of antibodies to block the virus, and we'll see if, in fact, this particular virus is still sensitive to the antibodies that were induced by the vaccines that we're using," he said.

"You never know until you test it in an in vitro, or test tube situation, and then you get into real world data of what happens when a vaccinated person or a boosted person comes into contact and gets infected."

The world has much to learn about the Omicron coronavirus variant before any decision can be made on how to address it, Dr. Anthony Fauci told CNN tonight during its town hall.

"From what we've heard from our colleagues at UCSF in San Francisco ... this person had mild symptoms and is actually improving," Fauci added. "But it's only a single person, Anderson, so you really can't make a broad general statement or an extrapolation for what would go on with unvaccinated people or people who were boosted, so there's a lot still to be learned and hopefully over the ensuing weeks or maybe a few weeks, two to three weeks, we'll get a lot more information."

Earlier today: Fauci announced the first US case of the Omicron variant had been detected in the US, in a traveler who had arrived from South Africa on Nov. 22 and tested positive Nov. 29.

The traveler, who landed in California, had mild symptoms and was self-isolating.