Our live coverage has ended. You can read more about the flight here.

The dream of Ingenuity began in the 1990s when Jet Propulsion Laboratory robotics technologist Bob Balaram heard Ilan Kroo, a Stanford University professor of aeronautics and astronautics, speak at a conference about a "mesicopter," or a miniature airborne vehicle for Earth.

Balaram could imagine it on Mars.

He proposed one for NASA during a call for submissions, but it wasn't selected for funding. The Mars helicopter would sit on the shelf for 15 years as Balaram worked on other Mars missions.

Ingenuity's time came in 2013 when Charles Elachi, director of JPL at the time, attended a presentation on drones and helicopters and returned to the lab asking if one could fly on Mars. Balaram retrieved his original proposal and developed the first conceptual design.

It was a long seven years of design, building and testing, with a technical crisis or challenge arising every week.The rigorous work put in to Ingenuity's design and testing is what made the helicopter possible.

The team pulled together people from specific disciplines, but they all thought outside of the box to help each other work on the components of the helicopter.

“On behalf of all of us at NASA Science, I just wanted to say how proud we are of you and how we recognize how important you are, for this particular success,” said Thomas Zurbuchen, associate administrator for NASA’s Science Mission Directorate.

“The story of this team is a compelling one," he added.

After a taste of success, the Ingenuity team is eager to get the helicopter back up in the Martian air again.

The helicopter has two weeks left and the team is planning four flights that will push the helicopter to fly higher and longer to test the limits of what it can do.

Ingenuity is a technology demonstration only designed to last for a short time – specifically 31 days.

The ephemeral nature of Ingenuity doesn't matter to its creators. Technology experiments and demonstrations in the past are the reason that rovers like Perseverance can explore Mars today.

When NASA's Pathfinder mission landed on Mars in 1997, it released a microwave-size rover called Sojourner on the surface. The technology demonstration was expected to last for seven days, but held on for 83. It took photos, explored the terrain of Mars and captured chemical and atmospheric measurements.

Perhaps most importantly, Sojourner demonstrated the successful use of the first wheeled rover vehicle on another planet, leading to a succession of car-sized rovers, like Curiosity and Perseverance.

If Ingenuity is successful, it could lead to a similar evolution.

She said they're waiting on more data from the Ingenuity helicopter before deciding on a specific date and time, but right now, Thursday is a possibility.

“We will be attempting to fly within the next few days," she said. 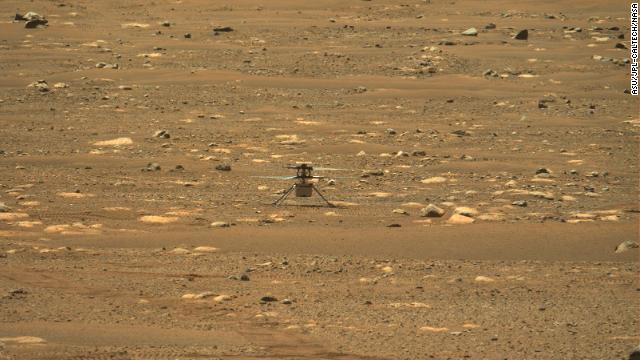 This may seem like a simple image of the Ingenuity helicopter sitting on the surface of Mars (oh, what a world that we can say that), but it’s a moment of triumph.

The Perseverance rover used its Mastcam-Z, a pair of zoomable cameras, to capture this view of Ingenuity after it safely touched down from its 40-second flight. This image was used in conjunction with data to confirm the success of the helicopter’s flight and its return to the Martian surface.

The helicopter team is pleased with the “gentle” flight Ingenuity experienced. The most recent data suggests that it flew in winds reaching between four to 13 miles per hour.

Following this morning's flight, the Ingenuity helicopter is doing great.

“Ingenuity itself is extremely healthy at this point,” said Bob Balaram, the Mars helicopter chief engineer at the Jet Propulsion Laboratory. “In fact, she's even healthier than she was before this flight. She shook off some of her dust that had been covering a solar panel and is in fact producing even more solar energy than before.”

Now, the helicopter team will study the data sent back over the next few days to prepare for the next flight.

“So all in all it's in a perfect state and I'm just really excited to see what all she can teach us over the next few weeks as we explore,” Balaram said.

He said the helicopter did everything it was supposed to do in the roughly 40-second flight.

“It was a flawless flight,” he said at a news conference. “It stuck the landing right in the place where it was supposed to go.”

NASA just released the full footage of its Ingenuity helicopter's first flight on Mars this morning.

Ingenuity flew for about 40 seconds total. The four-pound helicopter spun up its two 4-foot blades, rose up 10 feet in the air, hovered, took a photo and touched back down on Mars.

We'll get more information on the Ingenuity helicopter, which successfully completed its historic flight on Mars and safely landed back on the surface this morning.

You can watch the briefing in the video at the top of this page or on NASA's website.

The video is from the Perseverance rover's perspective, which had the perfect view of Ingenuity's flight from its elevated overlook 215 feet away.

"Think of it as a lookout point," said Farah Alibay, Perseverance integration lead for Ingenuity at NASA's Jet Propulsion Laboratory. "If you ever go to a national park and you have a beautiful view, you want to park there and look. Our rover is going do that and our beautiful view is going to be Ingenuity."

NASA will provide more information at a 2 p.m. ET briefing.

Here's a look at the footage: