The latest on Hurricane Delta

Our live coverage has ended, but you can follow the storm's path here.

Interaction with the Yucatan Peninsula has weakened Hurricane Delta.

The storm is now a Category 1 hurricane with sustained winds of 85 mph, according to the National Hurricane Center (NHC).

The center of the storm is now over the southern Gulf of Mexico and strengthening is expected over the next 36 hours.

The official forecast from the NHC is for Delta to regain major hurricane strength with winds of 115 mph by Thursday night.

The storm is still expected to hit Louisiana Friday afternoon.

Evacuation orders and curfews have been issued for several areas near the Louisiana coast in advance of Hurricane Delta hitting sometime later this week.

A voluntary evacuation order has been issued for Lafayette Parish by Mayor-President Josh Guillory. Residents are being "encouraged" to evacuate, a press release from Guillory's office said.

Iberia Parish has issued a voluntary evacuation order for all residents of the parish and is "strongly encouraging" people to evacuate.

A mandatory evacuation has been issued in Vermilion Parish for all residents in low-lying areas and anyone who lives in a trailer. Voluntary evacuations are in place for all areas below LA-14, and mayors of towns in those areas are encouraging residents to evacuate.

Gueydan Mayor Jude Reese posted a letter on social media to residents, saying the town is "in the worst possible position to be in, I say this not to scare anyone or instill fear in you but simply to get you to realize how serious this situation can be if it stays on the projected path!" He encouraged all residents to consider evacuating as soon as possible.

New Iberia Mayor Freddie DeCourt has issued a curfew from 10 p.m. to 6 a.m. local time on Thursday and Friday.

President Trump — who is working from the Oval Office as he continues to recover from coronavirus — just tweeted that he has been briefed on Hurricane Delta ahead of its landfall on the US later this week.

He urged residents to "please be prepared, be careful, and be safe." 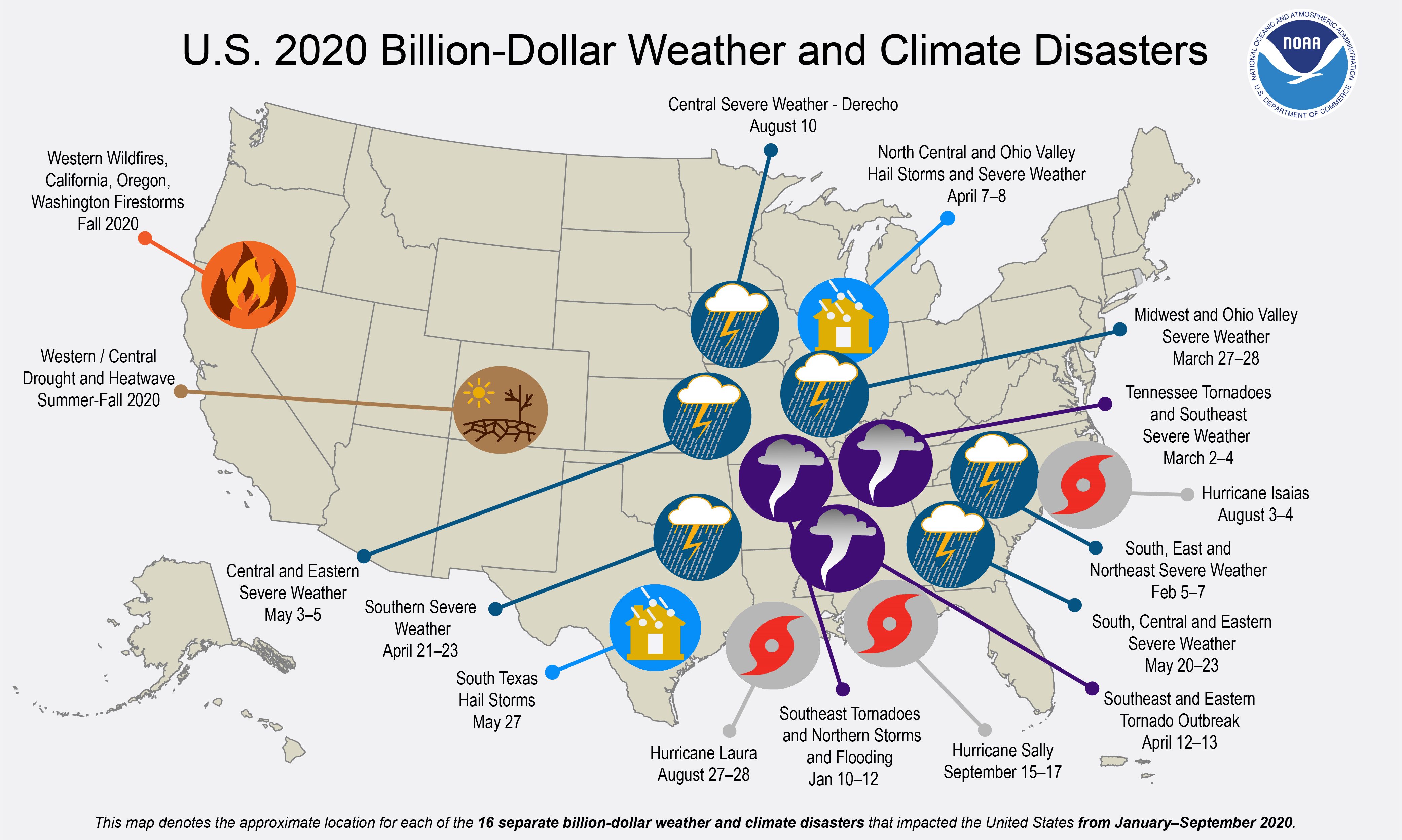 With three months to go in the year, 2020 has tied with 2011 and 2017 for the most billion-dollar events in the US, the National Oceanic and Atmospheric Administration announced Wednesday.

As of Oct. 7, there have been 16 weather and climate disaster events with losses exceeding $1 billion each to affect the United States. Three of these were hurricanes: Laura, Sally and Isaisis.

"Hurricanes that make landfall in the US, by nature of their strong sustained winds and powerful gusts, along with the coastal storm surge and inland flash flood threat, almost always cause a billion dollars in damage (and often many, many billion)," CNN meteorologist Brandon Miller says.

But Hurricane Delta could possibly cause enough damage to add one more to the list, catapulting 2020 to top of the list for the most billion-dollar disasters in a single year.

"Since 2020 looks to be the most hurricane landfalls the US has seen since 2005, it is no surprise we are on the cusp of setting a record for billion-dollar weather disasters," Miller says.

The average is just over 6 billion-dollar events in a year. However, this is the sixth consecutive year in which 10 or more billion-dollar weather and climate disaster events have impacted the United States.

Hurricane Delta remains a Category 2 storm as it continues on its path toward the US Gulf Coast, according to the National Hurricane Center's 2 p.m. ET advisory.

Delta is still expected to strengthen into a major hurricane before its expected landfall on the Louisiana coast on Friday.

Parts of Texas and Louisiana remain under a hurricane watch, according to the latest advisory.

Here's a look at the storm's projected path: 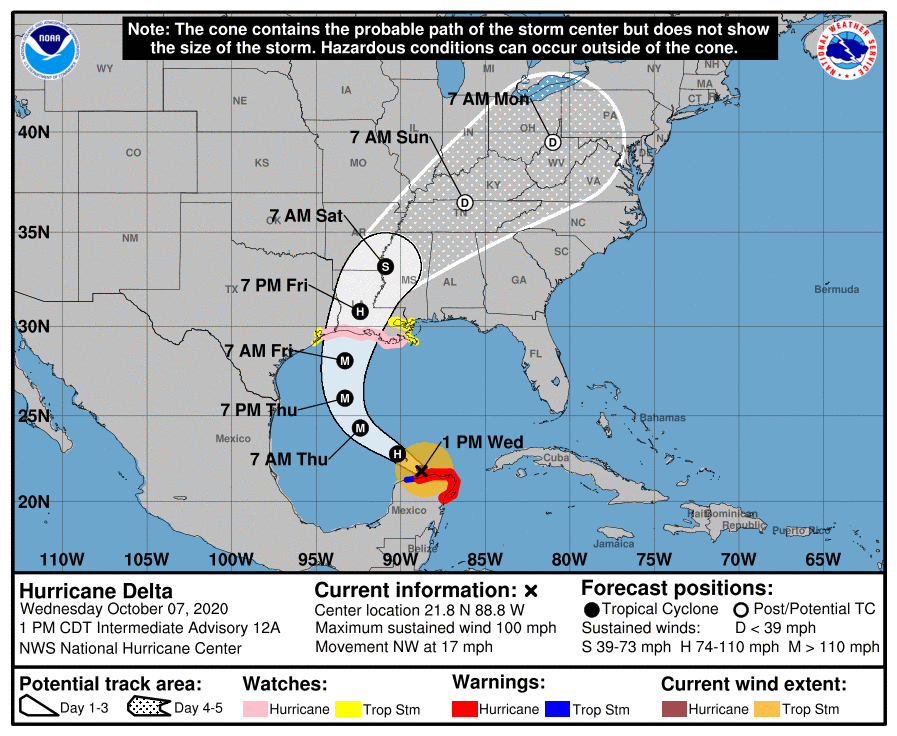 Louisiana Gov. John Bel Edwards has requested a pre-landfall Federal Declaration of Emergency in a letter to President Trump ahead of Hurricane Delta, which is forecast to make landfall along the coast on Friday, according to a news release from the governor's office.

The pre-landfall declaration comes just one day after Edwards declared a state of emergency for Hurricane Delta, which will allow the state to begin its preparations and to assist local governments in their response.

"Hurricane Delta is a dangerous storm that will bring strong winds, heavy rain, life-threatening storm surge and flooding to coastal Louisiana, and I am hopeful President Trump will quickly approve my request for a federal emergency declaration,” Edwards said.

The governor is urging all Louisianans to use today to prepare and heed the direction of their local leaders when it comes to evacuations.

As Hurricane Delta approaches the Gulf of Mexico, New Orleans city officials are urging all residents to come up with a storm plan ahead of Delta's arrival.

During a press conference on Wednesday, Mayor LaToya Cantrell said the city of New Orleans is currently outside of the cone — but they are still preparing for significant impact.

Cantrell warned residents that Delta could bring damaging winds, storm surges and possible tornadoes. The mayor is asking residents to be vigilant and have a plan prepared.

Collin Arnold, Director of Homeland Security for the City of New Orleans, says up to 4 to 6 feet of storm surge is expected.

Arnold said residents should start using this time to think about voluntary evacuations as flooding could start as early as Thursday.

"We stand ready and are aligned with our federal, state and local partners" Cantrell said.

Hurricane Delta is expected to strengthen into a major hurricane before it makes landfall along the US Gulf Coast later this week.

When it hits the US, Delta will become the 10th named storm to make landfall in the US this season, setting the record for the most in one year.

It will be the fifth hurricane to make landfall, joining Hanna, Isaias, Laura and Sally.

This will be the most storms the US has seen since 2005.

Hurricane Delta prompted 39,290 people in the Yucatán Peninsula to evacuate before the hurricane made landfall early Wednesday morning, Luis Ortega, the Head of the National Coordination for Civil Protection Prevention Unit, said in a press conference Wednesday.

He added that included tourists and local residents.

According to Ortega, 45 shelters in Quintana Roo hosted 1,901 people, and 29 shelters in the Yucatan hosted 810 people.

Ortega said that 70% of the island of Cozumel is currently without electricity.