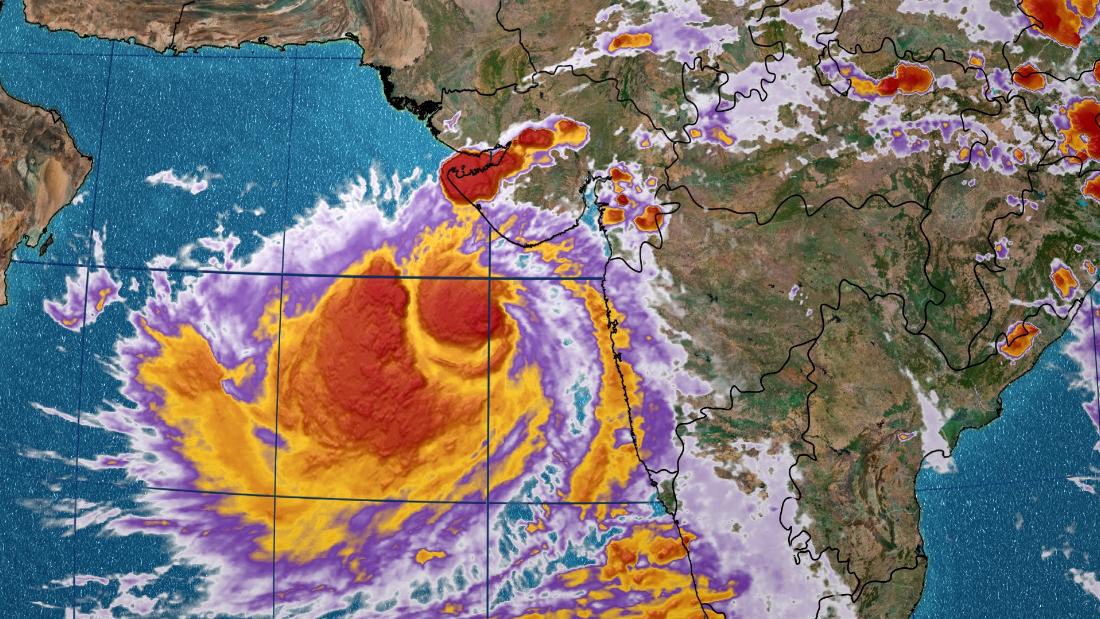 Tropical Cyclone Vayu is barreling toward the northwest coast of India and is expected to pass close to the Gujarat coast on Thursday.

While it's not forecast to make landfall, it remains a threat to the coast.

Here's a look at the numbers behind the storm:

Gujarat's state's Additional Chief Secretary, Pankaj Kumar, has appealed to those in the path of Tropical Cyclone Vayu to remain in a safe place and not to venture to coastal areas.

"Each and every life is valuable for us," Kumar said at a press conference on Thursday.

He said that people who are staying in evacuation shelters will stay there for now. "We have been providing adequate food, water and medical facilities for the evacuees," Kumar said.

So far, Kumar said there has "not been a single casualty" in the state because of the cyclone.

India's National Disaster Response Force says it has deployed 52 teams to deal with the impact of Tropical Cyclone Vayu.

Vayu, classified as a "very severe cyclonic storm," is not expected to make landfall but it will pass close to the coast, bringing strong gusts of wind, heavy rain and storm surges.

The Indian Coast Guard has said that all boats in Porbander Harbour are safe. The coastal town is one of the most likely to bear the brunt of Tropical Cyclone Vayu.

What to expect: The immediate coastline will still see heavy rain, strong winds, and storm surge, but the impacts will not be as great and they will not spread as far inland.

Gujarat’s famous Somnath temple, located on the western coast in Saurashtra (where the impact of the storm is expected to be felt the most) has remained open, despite the cyclone warning.

The daily "aarti" (a Hindu worship ritual) carried on as usual Thursday morning.

Local news channels are showing footage of some devotees visiting the temple despite the strong winds.

The Somnath temple is one of the most important pilgrimage sites for Hindus and is believed to be the first among twelve shrines, or jyotirlinga, to Lord Shiva.

On Wednesday, the Chief Minster of Gujarat, Vijay Rupani, said in a press conference that the temple will remain open. “We have urged the devotees and tourists not to visit but we can’t close the temple," he said.

Sathi Devi, head of the national weather forecasting center at the Indian Meteorological Department explained to CNN why Tropical Cyclone Vayu would probably not make landfall.

“It is moving north, north-westward and it has already entered the north east Arabian Sea," Devi told CNN, adding that landfall won't happen "for this particular system."

"Landfall means that the system will cross the coast and go (onshore). That is not happening, but it is coming close and it is skirting the coast."

The Joint Typhoon Warning Center classifies landfall as when the center, or eye, of the storm moves onshore.

What can we expect?

The immediate coastline will still see heavy rain, strong winds, and storm surge, but the impacts will not be as great and they will not spread as far inland.

The trend over the past 12-24 hours shows the likely track of Tropical Cyclone Vayu has shifted offshore of Gujarat state in northwest India.

The immediate coastline will still see heavy rain, strong winds, and storm surge, but the impacts will not be as great and they will not spread as far inland. Authorities have so far evacuated 300,000 people along the coast in anticipation of the storm.

The storm is still equivalent to a Category 2 hurricane and should maintain a similar strength over the next 12-18 hours as it passes offshore of Gujarat. Beyond this time period the storm will begin to move farther away into the Arabian Sea and will eventually fizzle out as we get to Saturday.

Vayu, which is classified as a "very severe cyclonic storm," is currently 130 kilometers (81 miles) southwest of Veraval city in Gujarat state and is expected to continue to move up the coast on Thursday, bringing expected storm surges and wind speeds of 135-145 kilometers per hour (83-90 mph).