Our live coverage has ended for the day. You can read more of the latest news on the Covid-19 pandemic here.

Bodendieck said a situation could arise in the coming days where two intensive care patients compete for one bed. The patient with the better survival chances would then get that bed, Bodendieck said.

Saxony on Monday introduced tougher measures to combat surging coronavirus cases in the state. They include a curfew from 10 p.m until 6 a.m for districts with a seven-day incidence rate of more than 1,000 per 100,000 inhabitants.

Within Saxony, the district of Sächsische Schweiz-Osterzgebirge has one of the highest seven-day incidence rates in the entire country, at just over 1,612 per 100,000 inhabitants, according to the national agency for disease control and prevention.

Germany’s Health Minister, Jens Spahn, didn't mince his words on Monday as he urged people to get vaccinated amid a Covid-19 surge gripping the country.

Spahn said he was certain that by the end of this winter, everyone in Germany would be “vaccinated, recovered or dead," in relation to the Delta variant.

Speaking at a press conference in Berlin, Spahn added that those who had the chance to protect themselves and others with the vaccine, should do so.

“It is important -- there is enough vaccine for all upcoming vaccinations, and both vaccines work,” Spahn said, speaking about BioNTech/Pfizer and Moderna.

Australia will allow fully-vaccinated international students and skilled workers into parts of the country without needing to apply for a federal travel exemption, Prime Minister Scott Morrison announced Monday.

Under the new rules, vaccinated tourists from Japan and South Korea will also be allowed to visit Australia from December 1.

Both groups will still need to comply with the quarantine measures set out by different states and territories.

Earlier this month Australia relaxed its tough border restrictions for citizens, residents and their families. Strict quarantine regulations were also dropped at a national level, meaning it is up to individual states and territories to decide their own restrictions.

The states of New South Wales and Victoria -- home to the largest cities Sydney and Melbourne -- have both dropped quarantine for fully-vaccinated people and children under 12. But Western Australia and some other states are still requiring 14 days quarantine.

Under the new arrangement, travellers will have to show proof of vaccination status, a negative Covid PCR test, as well as an eligible visa.

Monday's announcement comes a day after parts of Australia opened a travel bubble with Singapore, allowing fully vaccinated tourists to travel between the two countries.

New Zealand is set to introduce a new "traffic light" system that will significantly ease restrictions for vaccinated people from December 3.

Prime Minister Jacinda Ardern announced Monday that the entire country, including Auckland, will move into the new framework which will be based on vaccine certificates.

Ardern urged people to download the vaccine certificate, which will become critical for people to move around freely.

"Vaccine passes will operate in the traffic light system and if you aren't vaccinated then you won't be able to access a range of services," Ardern said.
"The hard truth is that Delta is here and it is not going away. And while no country has been able to eliminate Delta completely once it's arrived, New Zealand is better positioned than most to tackle it because of our high vaccination rate and the inbuilt safety measures in the traffic light system."

The announcement has been highly anticipated, especially for Aucklanders who have been living under strict lockdown measures since August, after the first community case of the Delta variant was found.

New Zealand abandoned its 'zero-Covid' strategy in October, but kept its largest city Auckland under restrictions while vaccination rates lifted.

The government initially said it wanted 90% of the eligible population fully vaccinated before moving into the new system. The Ministry of Health has indicated it is on track to reach that target by early December.

Already 83% of New Zealand's eligible population is fully vaccinated, while 91% have had their first dose, according to the ministry.

The government has issued vaccination mandates in some sectors for frontline health and education workers, which has led to protests in Auckland and Wellington.

Monday's announcement comes as 205 community cases were recorded -- the fourth highest daily case number since the start of the pandemic.

Protests in European countries against new Covid-19 restrictions turned violent over the weekend as cases continue to rise in the continent.

Rioting broke out in The Hague on Saturday over the Dutch government's new coronavirus measures. Video from the scene shows riot police deploying water cannons and charging groups of demonstrators.

Elsewhere, an estimated 40,000 people on Saturday crowded the streets of Vienna in Austria's biggest coronavirus-related protest to date. Police tried to deescalate the protest and when the "mood was about to tip," they stopped fining those not wearing facemasks, a police official said during a news conference Sunday.

And France sent dozens of elite police and counter-terrorism officers to its Caribbean island of Guadeloupe on Saturday following looting and arson overnight in defiance of an overnight curfew. 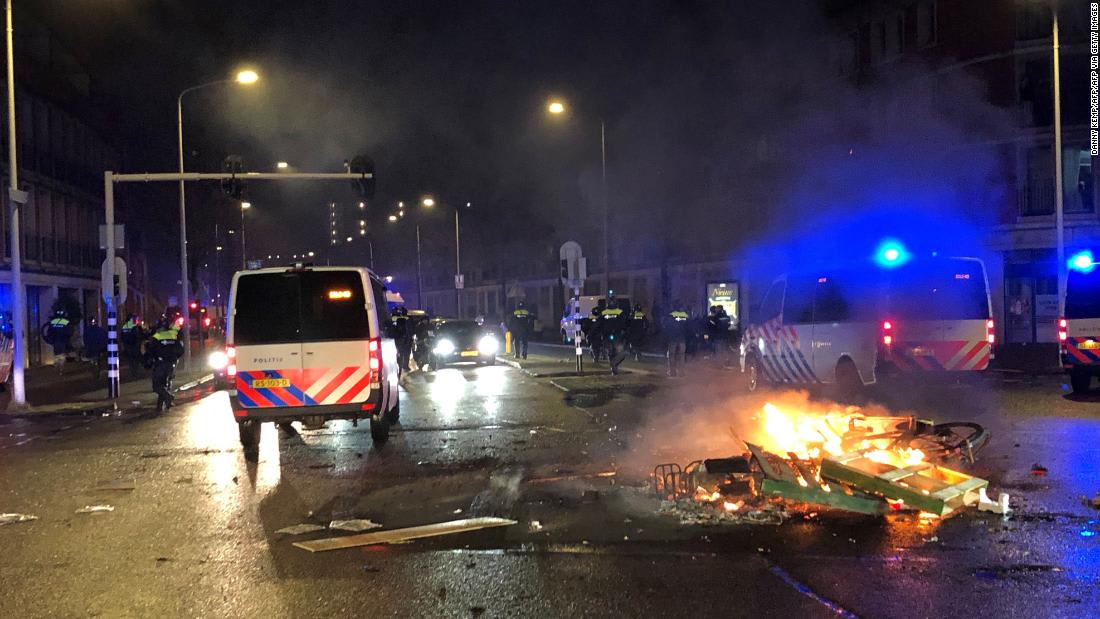 Austria on Monday became the first nation in the European Union to go into full lockdown this autumn.

The 20-day national lockdown came into force at midnight, meaning all people -- vaccinated or not -- can only leave their homes for essential reasons such as food, work and school. Non-essential shops are closed.

The lockdown will be reviewed after an initial 10 days, as per law.

The tough new restrictions come as the country battles a surge in Covid-19 infections. Last week Austria's seven-day incidence rate passed 1,000 per 1000,000 inhabitants for the first time during the pandemic, according to the Austrian Agency for Health and Food Safety (AGES).

On Tuesday, the country of roughly 9 million also reported 16,717 cases -- its highest number of cases in a single day.

Just under 66% of the population are fully vaccinated -- one of western Europe's lower rates -- according to figures from the Ministry of Health, last updated on Saturday. However the vaccination rate curve has been increasing in recent days, ministry data shows.