The new Covid-19 variant first found in the UK is growing rapidly, is more transmissible than other variants, and affecting a greater proportion of people under 20, according to a study.

The research is a collaborative effort from scientists and researchers at Imperial College London, the University of Edinburgh, Public Health England, the Wellcome Sanger Institute, the University of Birmingham and the COVID-19 Genomics UK Consortium.

As of December 30, at least 27 countries, Hong Kong, and Taiwan have so far reported cases of the new strain, per CNN reporting.

“There is a consensus among all analyses that the VOC [the Variant of Concern or new variant] has a substantial transmission advantage,” the study said. It added that the difference between the reproduction number of the mutation, in comparison to other variants of the virus, is 0.4 to 0.7 higher. The reproduction number reflects the number of individuals that one infected person transmits the virus to.

According to the study, the reproduction number for the new variant is currently between 1.4 and 1.8.

“These analyses, which have informed UK government planning in recent weeks, show that the new variant of concern, B.1.1.7, has substantially higher transmissibility than previous SARS-CoV-2 viruses circulating in the UK,” Professor Neil Ferguson of Imperial College London said.

The study also said that while people under the age of 20 years make up a greater proportion of cases of the new variant of the virus, it is too early to determine the reason why.

As the new variant is more easily transmissible, controlling it will be more difficult, said Ferguson, who emphasized the "urgency of rolling out vaccination as quickly as possible."

Imperial College's Dr. Erik Volz said that "all viruses evolve, and very rarely a virus will change in a way that requires us to re-evaluate public health policy," noting that experts had found "overwhelming evidence of a change in transmissibility of the B.1.1.7 variant that should be taken into account when planning our Covid-19 response in the new year.”

On Monday, the UK will roll out the Oxford/AstraZeneca vaccine, which was authorized for use on Wednesday.

In the shadow of the Covid-19 pandemic, today's New Year festivities around the world will be largely subdued and restricted.

Police in the Australian state of New South Wales (NSW) say they will perform spot checks on New Year’s Eve gatherings to ensure Covid-19 restrictions are being adhered to, according to public broadcaster ABC.

NSW Police Assistant Commissioner Mick Willing told ABC: "You are going to see large numbers of uniformed police officers out and about."

"We'll be checking licensed premises, we'll be door-knocking when necessary, we'll be out and patrolling public areas to ensure people abide by the current health orders," he added.

China will provide free coronavirus shots to all of its citizens, a top health official said in a news conference Thursday.

Zeng Yixin, a vice-minister of China’s National Health Commission said that vaccines provide a public benefit by their very nature and while their price may vary, "an important premise is that [they] will be provided to the public for free.”

On Thursday, China’s homegrown Sinopharm vaccine was approved for use by China’s regulator, the National Medical Products Administration.

More than 4.5 million doses of the vaccine have already been administered to "key groups" and "high-risk groups" prior to the authorization of the vaccine as part of a controversial emergency use program that began in July.

Among those who have already been vaccinated, fewer than 0.1% developed a light fever, and about two people per million developed "relative serious adverse reactions" such as allergies, according to Zeng.

Pfizer says it does not have data to demonstrate that just a single dose of its Covid-19 vaccine would provide protection against the disease after more than 21 days, after the UK government announced plans to widen intervals between the first and second doses from three to 12 weeks.

“Pfizer and BioNTech’s Phase 3 study for the Covid-19 vaccine was designed to evaluate the vaccine’s safety and efficacy following a 2-dose schedule, separated by 21 days,” Pfizer said in a statement on Thursday.

There are no data to demonstrate that protection after the first dose is sustained after 21 days," Pfizer said.

The pharmaceutical giant explained that it did not evaluate different dosing schedules because “the majority of trial participants received the second dose within the window specified in the study design.”

Pfizer’s statement comes after the UK's Chief Medical officers issued updated guidance on the coronavirus vaccine developed by Pfizer and BioNTech, now advising that a second dose may be given between three to 12 weeks following the first dose.

Speaking during a televised briefing from Downing Street on Wednesday, the head of the UK medicines regulator (MHRA), Dr. June Raine said that the updated guidance “allows for a potentially longer interval” than previously recommended, presenting an opportunity to vaccinate more people with first doses sooner and potentially providing them with some degree of protection before receiving their second doses.

In addition to not having data to support the new guidance by the UK government, Pfizer has urged health authorities to be vigilant when introducing different dosing regiments.

“While decisions on alternative dosing regimens reside with health authorities, Pfizer believes it is critical health authorities conduct surveillance efforts on any alternative schedules implemented and to ensure each recipient is afforded the maximum possible protection, which means immunization with two doses of the vaccine,” the company said on Thursday.

“We remain committed to our ongoing dialogue with regulators, health authorities and governments, including the UK, and to our continued data sharing efforts to help inform any public health decisions aimed at defeating this devastating pandemic,” Pfizer added.

The Czech Republic has recorded its highest daily tally of positive Covid-19 cases since the pandemic started, after health authorities reported 16,939 new cases on Thursday.

According to the Czech Health Ministry, 52% of tests carried out in the past 24 hours came back positive.

The Czech Republic is one of the countries hardest hit by the coronavirus in Europe, with 718,661 diagnosed cases and 11,580 deaths.

The country is currently at level 5, the highest of its Covid-19 risk assessment levels, which means the situation across the country is at a critical stage.

Several Australian states moved to shut borders as cases stemming from an outbreak of Covid-19 in northern Sydney earlier this month continues to grow and take root in neighboring Victoria state.

Interstate travel had largely been cut earlier this year during the country’s first wave.

Victoria, which reported three new locally transmitted cases Thursday, will close its borders with the state of New South Wales (NSW) starting Friday, according to public broadcaster ABC. As a result of the fresh outbreak in the state, new Covid-19 restrictions have been issued hours before New Year’s Eve celebrations, with gatherings of more than 15 people are no longer allowed and masks are now mandatory indoors.

In the Northern Territories, Health Minister Natasha Fyles announced that from Friday, travelers from the greater Sydney area would have to go into quarantine in a designated facility. She added they were monitoring the situation in metropolitan Melbourne in Victoria state.

The usual New Year's Eve fireworks display in Sydney has been shortened this year, with movement around the city restricted.

“The cabinet committee has decided that to begin with 12 lac (1.2mil) doses of vaccines will be bought from Chinese company Sinopharm, which in the first quarter of 2021, will be provided for free to front line workers,” Chaudhry tweeted.

China approved a coronavirus vaccine developed by Sinopharm for public use on Thursday. Beijing Biological Products Institute, a unit of Sinopharm’s subsidiary China National Biotec Group, announced on Wednesday that its Covid-19 vaccine is more than 79% effective.

On Thursday, Pakistan reported 2,475 coronavirus cases for the previous 24 hours, bringing the country's total caseload to 479,715. It also reported 58 virus-related fatalities, for a total death toll of 10,105.

A prison in Seoul has recorded 792 Covid-19 cases since late November, Vice-Minister of Justice Lee Yong-gu said in a briefing Thursday.

The Dongbu detention facility, located in southeast Seoul, reported its first case after a staff member was believed to have contracted the virus from their family, according to Lee.

The minister said all prison facilities nationwide are now following the highest social-distancing measures, banning all visits except special lawyer-inmate meetings, and cancelling all work and classes from Thursday.

The national tally of confirmed cases now stands at 60,740, with 900 related deaths, according to KDCA.

New Year's Eve celebrations around the world will look very different this year as cities take precautions against the spread of Covid-19.

The best view of most major cities is going to be from your couch. Most of the large traditional displays of fireworks and celebrations globally have been canceled and replaced with smaller televised or streamed events.

Here are the places still holding events and where to watch the downscaled favorites.

London: London's iconic fireworks show over the River Thames is canceled this year, and much of England is now under tough stay-at-home restrictions. But there will be a special broadcast on the BBC for people to enjoy while they're inside.

New York: Yes, the ball will be dropping in Times Square and there will be some celebration, but the events are closed to the public. The show is going on for the annual national broadcasts on several stations, so even though no one is waiting for hours in the freezing cold, you can still see the events unfold as we count down to midnight.

Sydney: Sydney is forgoing its traditional public showstopping New Year's Eve events for smaller celebrations that will be publicly broadcast. Instead of a huge fireworks show, there will be a smaller display over the Sydney Harbour Bridge at midnight.

Paris: There will be no public events held for those celebrating the new year in Paris, but there will be a livestreamed concert in Notre Dame Cathedral by composer and performer Jean-Michel Jarre for everyone to watch. 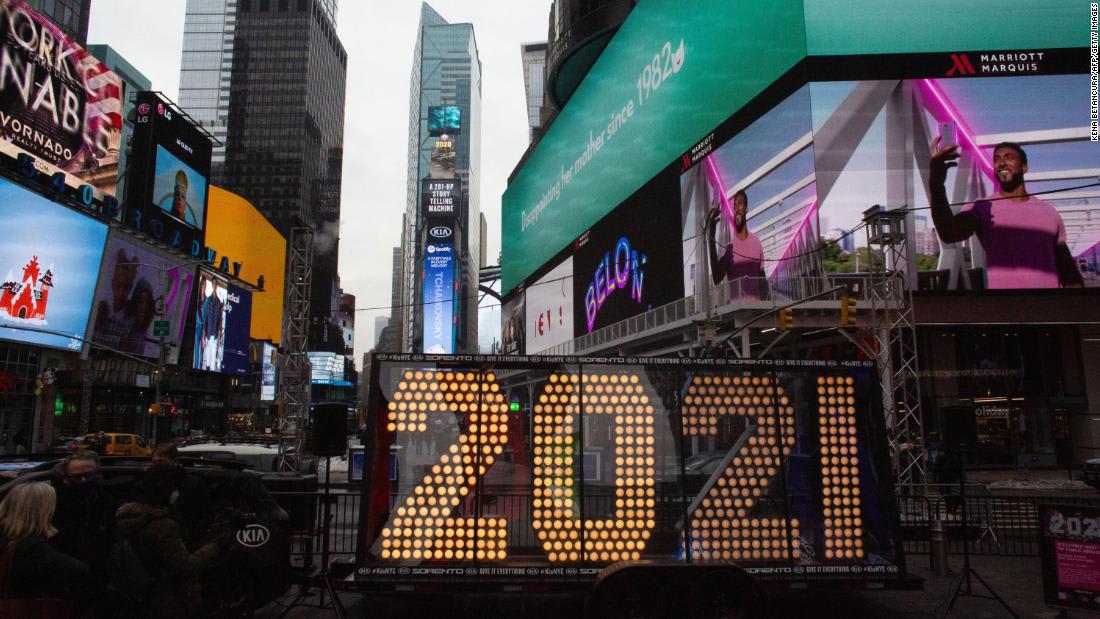 New Year's Eve fireworks are on in some places, but they'll look a lot different this year