December has been the US's deadliest month since the start of the Covid-19 pandemic -- with more than 63,000 Americans lost to the virus in the past 26 days.

By comparison, the entire month of November saw about 36,964 deaths.

The grim death toll comes on the heels of several brutal months for the US, with Covid-19 ravaging communities from coast to coast, crippling hospital systems and prompting widespread new restrictions.

The authorization of two Covid-19 vaccines earlier in December offered some hope of a light at the end of the tunnel -- but experts continue to warn that while the end is in sight, the pandemic is not over and another surge stemming from Christmas travel and gatherings could be on its way.

More than 616,000 people were screened at TSA checkpoints across the country on Christmas Day alone, and hundreds of thousands more traveled in the days leading up to the holiday. Numbers are expected to climb again this weekend. 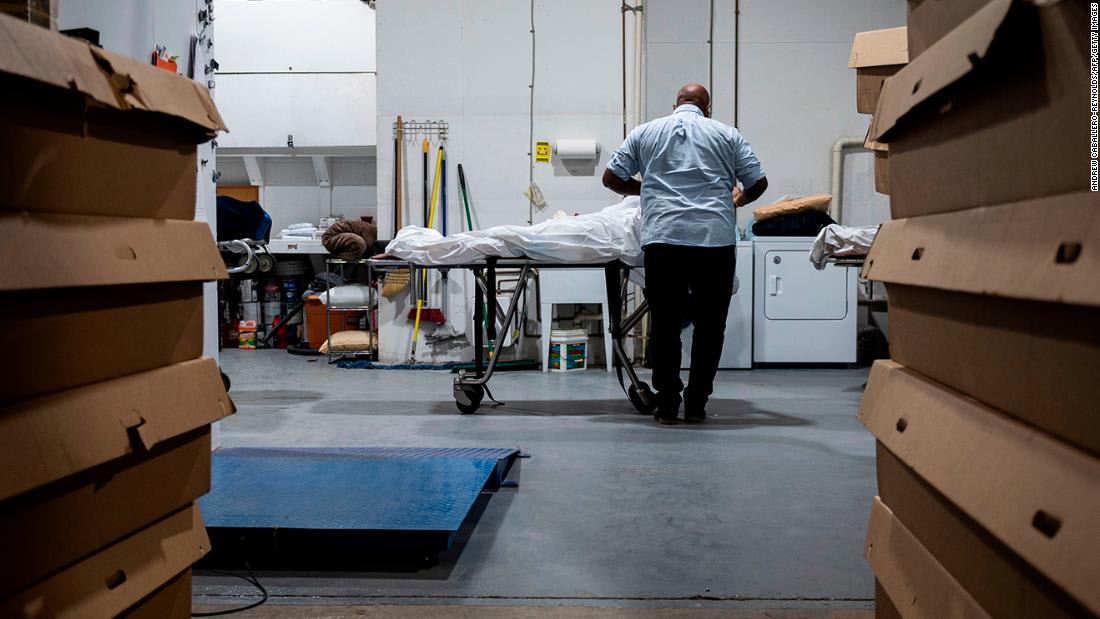 December is the deadliest month in the US since the coronavirus pandemic began -- and projections for January are 'nightmarish,' expert says

The country received a shipment of 300,000 doses of Sputnik V on December 24, and will become the fourth nation in Latin America -- behind Mexico, Chile and Costa Rica -- to begin vaccinating citizens against the virus.

Argentina's Minister of Health, Gines González García, said on Twitter that the vaccination campaign will be carried out in an "equitable manner throughout the country."

According to the government's vaccine plan, health care workers and teachers will be among the first people to be inoculated, along with individuals at risk of developing a serious illness, such as people over the age 70. Elderly residents in long-term nursing homes are also to be prioritized under Argentina's first phase of vaccinations.

Argentine authorities announced on Wednesday new requirements for entry into the country for nationals, residents and foreigners who have authorization to enter the country.

Passengers are required to present a negative PCR test result at the Ezeiza or San Fernando airports, which will be the only air terminals through which travelers can enter the nation, as well as a seven-day quarantine.

The restrictions will be in effect until January 8, according to the Interior Ministry.

To date, Argentina has reported a total of 1,578,267 cases of Covid-19 and 42,501 deaths since the start of the pandemic, according to the country's ministry of health.

Japan's capital Tokyo has reported the highest single-day rise in Covid-19 infections on Saturday, with 949 cases.

Nationwide, Japan has reported 3,703 Covid-19 cases Saturday, the Ministry of Health, Labor and Welfare said in a statement. This is a slight drop after the country reported its highest single-day infection for a third day in a row with 3,823 cases on Friday.

The total number of infections now stands at 218,024, the ministry said. Fifty-eight additional deaths were reported on Saturday, bringing the nationwide death toll to 3,226.

On Saturday, Japan announced that it will ban foreign nationals from entering the country from Monday through the end of January, after several cases of a new Covid-19 variant were recorded, the Japanese foreign ministry said in a statement.

China is conducting a new round of mass testing in a northeastern district of Beijing after the capital reported two new locally transmitted Covid-19 cases Friday.

The mass testing involves some 800,000 people in Beijing's Xinyi district, Pang Xinghuo, deputy director of the Beijing Center for Disease Control and Prevention, told reporters. A total of 92 testing stations have also been set up to collect samples.

The mass testing has so far identified five more Covid-19 infections in Beijing's Xinyi district, who were all close contacts of the two initial cases, Pang added.

On Saturday, China reported 22 new Covid-19 cases, of which 12 were locally transmitted, according to China's National Health Commission. Four additional local asymptomatic cases were also reported across the country.

Countries across Africa have reported more than 2.6 million coronavirus cases, with a continent-wide death toll of over 60,000, according to the Africa Centers for Disease Control.

A new variant of the coronavirus was detected in South Africa this week, causing some countries to close their borders to travellers from the African nation, over concerns the variant could be related to or as infectious as one first discovered in the United Kingdom, which appears to spread more easily than previous variants of the virus.

Passengers arriving in the United States from the United Kingdom must test negative for Covid-19 before departure, the US Centers for Disease Control and Prevention announced late Thursday.

Passengers will be required to have a negative PCR or antigen test within 72 hours of boarding their flight. Passengers are also required to provide documentation of their laboratory results, either as a hard copy or electronic.

Airlines are required to confirm the test results before the flight, and passengers will not be permitted to board if they refuse a test or do not provide documentation.

The order is in response to a new coronavirus variant that is said to have originated in the UK and is potentially more transmissible. Since the discovery of the variant, more than 40 countries have restricted travel from the UK, and in some cases, also travel from other countries that have documented cases with the variant.

The agency said the order will be signed Friday and go into effect on Monday.

Genetics experts have expressed preliminary concerns that the Covid-19 vaccines might have less efficacy against this new variant. Pfizer and Moderna are testing their vaccines to see if they work against the new variant.

The UK coronavirus variant has not been identified through genetic sequencing efforts in the US, the CDC said Tuesday. But that may be because the US surveillance system isn't catching it.

"It could be in the United States, and we might not have yet detected it," Assistant Secretary for Health Admiral Brett Giroir said Monday.

Here's what we know and don't know about the UK Covid-19 variant.

The safest way to celebrate the new year during the pandemic is at home with the people you live with, or online with friends and family, the US Centers for Disease Control and Prevention said in guidance posted to its website on Wednesday.

“Staying home is the best way to protect yourself and others,” it says, echoing guidance for other winter holidays.

For those who host a celebration, the CDC suggests staying outside, limiting the number of guests, making extra masks available and keeping background music low to avoid shouting.

When attending a celebration, the agency says masks should be worn indoors and outdoors, people should stand at least 6 feet apart, avoiding crowds and poorly ventilated spaces, and washing hands regularly, and alcohol and drugs that can alter judgement should be avoided.

“While it is possible that some people may receive Covid-19 vaccines before New Year’s Eve, continue taking steps to protect yourself and others for some time to come,” the CDC says.

“It’s okay if you decide to postpone or cancel your gathering. Do what’s best for you,” the guidance says.

Holiday travel may also increase a person’s chance of getting and spreading Covid-19, and CDC continues to recommend postponing travel.