The vaccine, made by J&J subsidiary Janssen, comes in a single dose. The trial now has about 45,000 participants.

The company said with the high rate of disease transmission among the general population in the United States, this number of volunteers should be enough to quickly get the data the company needs to determine if the vaccine works and to determine if it is safe.

J&J expects to have interim data by the end of January.

If the trial goes as expected, the company said it expects to submit the trial results to the US Food and Drug Administration for an emergency use authorization in February.

Japan reported another day of record Covid-19 cases, adding 3,214 infections from Thursday, according to the country's Health Ministry.

Winter surge: Japan is seeing a rise in Covid-19 cases and hospitalizations since the start of November, as cold winter temperatures set in. Large urban centers like the capital Tokyo are reporting their highest level of infections.

Tokyo reported 822 new Covid-19 cases on Thursday, marking the highest single-day rise since the start of the pandemic, the Tokyo metropolitan government announced.

Tokyo Gov. Yuriko Koike warned the city could reach 1,000 new cases a day if the trend continues and issued a special alert for the new year holidays.

"We must have more sense of crisis," she said at a news conference late Thursday. The same day, the city raised its alert level to "Level 4" -- the highest of the four-tier category.

The country is grappling with another wave of infections as winter sets in.

In a Friday statement, the KDCA said 26 of the new cases were imported while 1,036 were locally transmitted.

The majority of the new infections -- 757 -- were in the Seoul metropolitan area.

South Korea also reported that 11 people died from the virus on Thursday, bringing the country’s total death toll to 645.

South Korea has recorded at least 47,515 cases since the beginning of pandemic.

The US Food and Drug Administration said Thursday it plans to grant emergency use authorization to Moderna for its coronavirus vaccine.

“Following today’s positive advisory committee meeting outcome regarding the Moderna Covid-19 vaccine, the US Food and Drug Administration has informed the sponsor that it will rapidly work toward finalization and issuance of an emergency use authorization,” FDA Commissioner Dr. Stephen Hahn and Dr. Peter Marks, director of the FDA’s Center for Biologics Evaluation and Research, said in a statement.

“The agency has also notified the US Centers for Disease Control and Prevention and Operation Warp Speed, so they can execute their plans for timely vaccine distribution," the statement continued.

The United States reported 114,237 people hospitalized with Covid-19 on Thursday, the highest number since the pandemic began, according to the Covid Tracking Project (CTP).

This is the 16th consecutive day that the US has remained above 100,000 current hospitalizations.

The highest number of hospitalizations according to CTP data are:

A new mystery cluster of Covid-19 cases in Australia's New South Wales continues to grow after 10 new cases were added overnight, according to the NSW Health Department.

The total number of cases related to the cluster from Sydney's Northern Beaches is now at 28. Health officials believe the source may have been from overseas.

"NSW Health can now confirm the viral genome sequencing of the Avalon Covid-19 cluster does not match the virus strains seen in recent clusters in Australia. The virus is likely of overseas origin," the health department said in a news release Friday.
"The source of infection is still being investigated."

Health officials are asking Northern Beaches residents to stay home as much as possible Friday and through the weekend.

"This includes working from home where possible, not visiting friends or family in aged care facilities or hospitals unless essential, avoiding unnecessary gatherings and high-risk venues such as clubs, restaurants, places of worships and gyms, and avoiding unnecessary travel outside of or to the Northern Beaches area," the health department said.

What we know: The first cases of the cluster were reported Wednesday -- the first locally-transmitted cases in the state since December 3.

One case identified from Wednesday was a 40-year-old bus driver who took airline crews to and from their hotels. The health department said the driver's strain does not match the strain seen in recent clusters in Australia.

"This virus may be of United States origin and linked to international aircrew, however investigations are continuing. No confirmed cases of Covid-19 have been linked to this case," the health department said.

New South Wales has recorded a total of 4,493 virus cases since the beginning of the pandemic, according to NSW Health.

As the United States on Thursday surpassed 17 million official Covid-19 cases, a US Food and Drug Administration advisory panel recommended a second coronavirus vaccine for the country.

The developments come as the US, after starting distribution of its first authorized vaccine this week, is dealing with record rates of daily cases, daily deaths and numbers of Covid-19 patients in hospitals.

The FDA is widely expected to grant emergency use authorization for Moderna's vaccine candidate -- as it did for Pfizer's vaccine last week -- after its vaccine advisory panel voted to recommend it.

The Centers for Disease Control and Prevention would need to greenlight the vaccine before shots can be administered -- and a CDC advisory panel is expected to meet on the matter Saturday, raising the possibility that the Moderna vaccine could be used next week.

The recently authorized Pfizer vaccine, meanwhile, has been administered to hundreds of US health care workers this week, and drug store chains CVS and Walgreens are helping to get shots to long-term care residents and staff members.

The Pfizer vaccine requires each patient to receive two doses about 21 days apart, and the Moderna vaccine also would require two doses. Assuming the Moderna vaccine is authorized, the two products could combine for an availability of 40 million doses, for 20 million people, by the end of December, Dr. Anthony Fauci, director of the National Institute of Allergy and Infectious Diseases, has said. 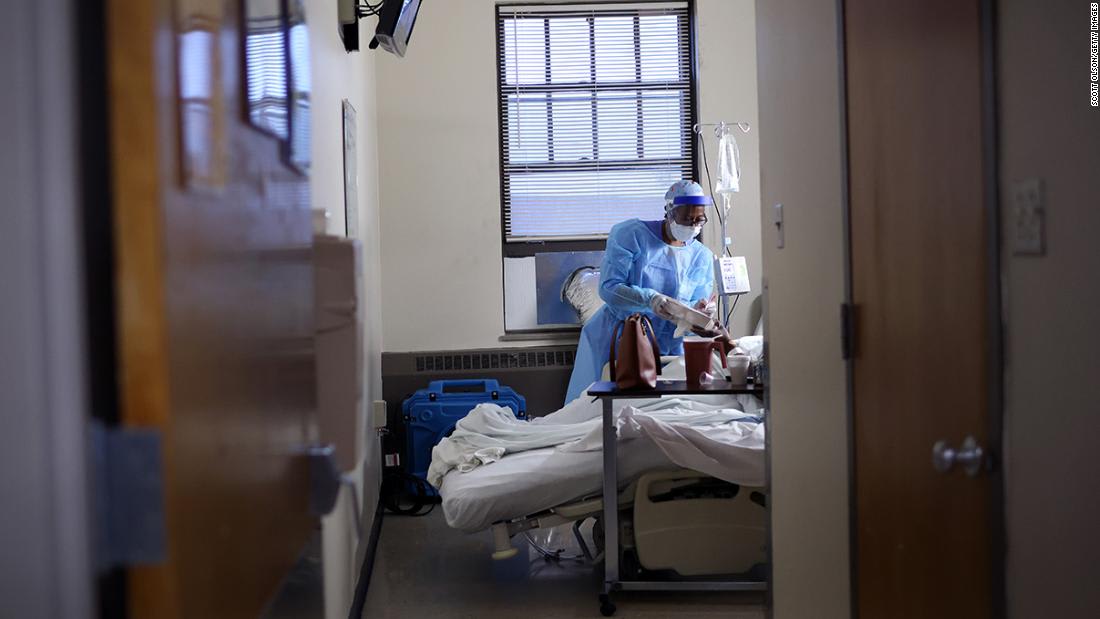 US sets Covid-19 case, hospitalization and death records ahead of key meeting for Moderna's vaccine candidate

French President Emmanuel Macro has a "fever" and is "tired [and] coughing" after testing positive for Covid-19 on Thursday, according to an Élysée spokesperson.

Macron will self-isolate for a week, his office said. The 42-year-old French leader has traveled from Paris to the presidential residence La Lanterne in Versailles for his seven-day quarantine, according to the spokesperson.

French First Lady Brigitte Macron, 67, remains at the Élysée Palace in Paris and has protectively gone into quarantine though she "presented no symptoms," her office told French media.

"(Macron) is isolated all the while being able to continue working," the spokesperson said, adding that the President had received messages of support from leaders around the world on Thursday.

His diagnosis sent ripples through the French and European political sphere, with multiple figures now forced to quarantine.

Macron's planned trip to Lebanon next week has been canceled.

The French President had meetings with a number of other top European leaders in recent days, several of whom announced they would quarantine in the wake of Macron's diagnosis. 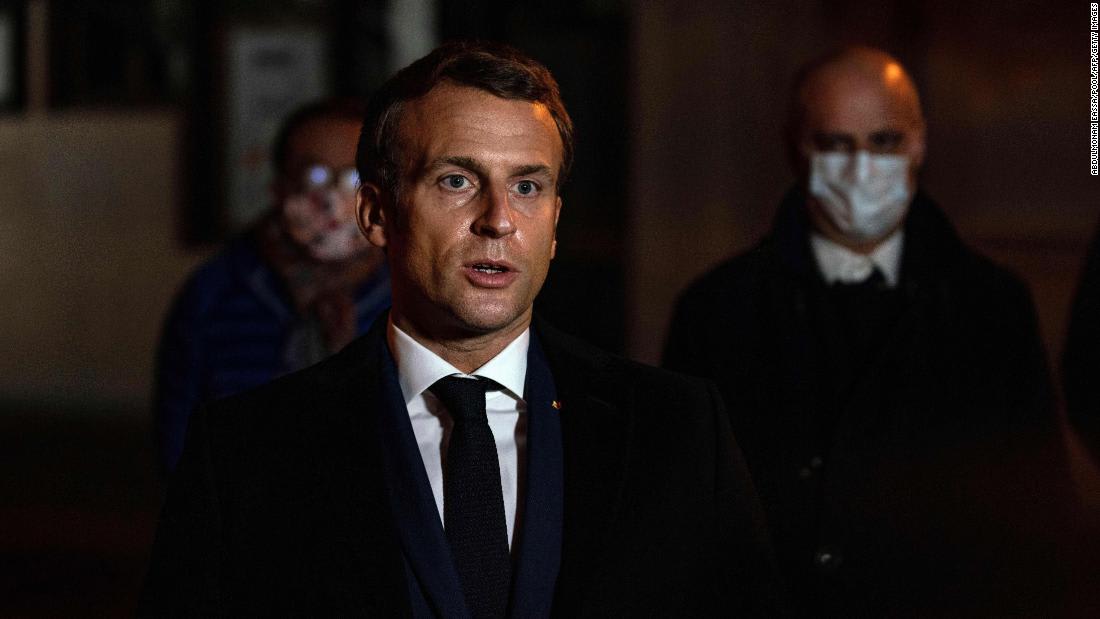