Speaker of the House Nancy Pelosi said it's "unfortunate" that some members of Congress have not yet been vaccinated against Covid-19 and defended the congressional mask rules, which are still in place despite the updated guidance from the US Centers for Disease Control and Prevention.

While the CDC now says fully vaccinated people can go maskless in most situations, Pelosi said that until more members of Congress are vaccinated, the chamber can not meet without masks.

"It is unfortunate that a large number of people in the Congress have refused to be vaccinated — or I don't know what it is, I don't know, refused or have been vaccinated and don't want to to admit — I don't know what that is, because I shouldn't know, it's their personal business," Pelosi said at a news conference today. "As the doctor said, until they are vaccinated, we cannot have meetings without masks."

"We have a responsibility to make sure that the House of Representatives' chamber is not a petri dish because of the selfishness of some not to be vaccinated."

Some context: A CNN survey of Capitol Hill last week found Democratic lawmakers in both chambers of Congress have a 100% vaccination rate against Covid-19, significantly outpacing Republicans in the House and Senate and illustrating the partisan divide over the pandemic.

For Republicans, at least 44.8% of House members are vaccinated and at least 92% of senators are, CNN found.

Argentina reported a new daily record of coronavirus cases Wednesday for the second day in a row as President Alberto Fernández is set to implement new restrictions this weekend.

Fernandez is continuing meetings with governors Thursday to work out the details of new measures, which are expected to last two to three weeks, state news agency Telam reported. On Wednesday, he also met with 12 governors and epidemiologists.

According to government data, 8,348,823 people in the country have received one dose of a Covid vaccine and 2,128,974 have received both.

“The state of Iowa is putting parents back in control of their child’s education and taking greater steps to protect the rights of all Iowans to make their own health care decisions,” Reynolds said in a news release about the legislation.

The announcemnbet comes after the US Centers for Disease Control and Prevention last week released new guidelines that fully vaccinated people can take off their masks in nearly all settings.

The United Kingdom defended its continuation of direct flights from India despite a 28% rise in cases of the B1.617.2 variant in two days.

The UK "cannot ban its own citizens from returning home," Transport Minister Grant Shapps told Sky News Thursday, adding that all passengers on Indian flights are either British or Irish citizens or permanent residence holders with the right of abode in the British Isles.
A ban could prompt people to "spread amongst many other flights," he added, consequently "making it harder to carry out the mandatory hotel quarantine."

India was added to the UK's highest-risk red country list on April 23 in order to "protect the country against a new variant of coronavirus (COVID-19) and against other existing variants," according to a news release from the Department of Transport.

About 2,967 cases of the B1.617.2 variant, which was first detected in India, have now been identified in the UK, Health Minister Matt Hancock told the House of Commons Wednesday. This represents a 28% increase on the 2,323 cases reported Monday.

The transport minister reiterated his calls for UK citizens not to visit amber or red list countries for vacations, emphasizing that travel to these countries is only for essential purposes.

He said there was a "heck of a lot of hassle" involved in traveling to an amber country, such as France or Italy, citing the need for three Covid tests upon return and the completion of a five-day home quarantine.

"We're not at the stage of, you know, saying to people: 'Go to those places on holiday.' In fact, please don't," he added.

As of Thursday, Taiwan has reported 2,825 total Covid-19 cases, including 1,669 locally transmitted infections, the CECC said.

Earlier on Thursday, the CECC said in another news conference that anyone who spreads disinformation about the Covid-19 epidemic in Taiwan could face up to three years in prison and a fine equivalent to $107,000.

Taiwan had been among the safest spots on the planet when it came to coronavirus, with life on the island proceeding much as usual, until a sudden outbreak this month more than doubled the number of cases reported since the pandemic began.

Several Indian states are facing shortages of a drug used to treat black fungus, a rare and potentially fatal infection that is increasingly being detected in Covid-19 patients, health authorities in the country have warned.

The infection, known by doctors as mucormycosis, had been seen in India before the pandemic, but cases are mounting rapidly in coronavirus patients and those who have recently recovered. It is caused by mold found in wet environments and can attack the respiratory tract, particularly of those with compromised immune systems.

At least 90 people have died of black fungus in the western state of Maharashtra, which includes the bustling financial center Mumbai and has been hit hard by the pandemic, said the state's health minister Rajesh Tope on Wednesday. At least 800 people are currently hospitalized with the infection.

Some 2,000 cases have so far been recorded, according to local health officials.

"We are now getting 100 cases daily on average," Dr. Tatyarao Lahane, a senior state health official, told CNN on Wednesday.

Some 115 cases were found in Haryana and at least 150 in Telangana, according to state officials.

Black fungus cases have also been found in New Delhi, according to Padma Srivastava, head of the department of neurology at the All India Institute Of Medical Sciences in the capital.

"Every single day in emergency it is average 20 and above (cases reported)," Srivastava told local media on Wednesday, adding that a separate ward had been created for black fungus patients at the hospital. 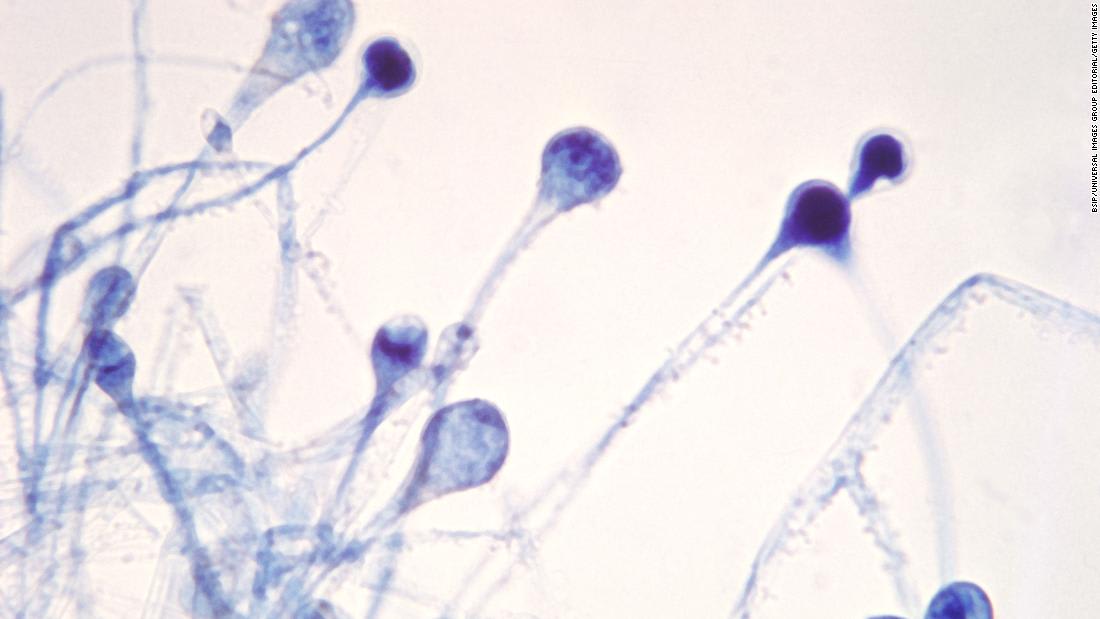 Gaza's main Covid-19 laboratory, the Rimal clinic, is unable to carry out coronavirus testing after being destroyed by Israeli airstrikes, the Hamas-run Palestinian Ministry of Health said, warning the situation “certainly poses a high risk of the spread of the virus.”

The ministry issued the warning in a statement about the effect of Israeli airstrikes on medical facilities in Gaza.

"A number of health facilities (21), including the MOH administrative complex and Rimal clinic, have been targeted or affected by the airstrikes. Thus, COVID-19 laboratory testing services, that are solely provided at the MOH Central Laboratory in Rimal clinic, have been completely ceased, which certainly poses high risks of widespread of the virus," the ministry said Wednesday.

The Rimal clinic was damaged by Israeli airstrikes on Monday, Hamas authorities said. Video from the scene showed windows blown out in the building. At the time, Hamas referred to the clinic as one of Gaza’s main coronavirus testing centers.

A spokesperson for the Israel Defense Forces told CNN on Tuesday that it targeted the main operations center of the Hamas internal security forces in the Rimal neighborhood, and that the target building was close to the clinic.

The Ministry of Health statement called UN agencies and humanitarian organizations "to protect health teams and establishments, as well as to advance pressure on the Israeli side to allow entry of critically needed medical supplies into the Gaza Strip ASAP."

Israel – which controls two entry points into Gaza – briefly opened the crossings on Tuesday, but said it closed them in response to mortar fire from the territory towards Israel.

On Wednesday, mortars were again fired from Gaza as a shipment of aid from Jordan, including medical supplies, was passing through the Kerem Shalom crossing, prompting Israel again to close the crossing, Israeli authorities said. The shipment did not get through.

A total of 1.5 million people in Nepal are not able to get their second dose of a Covid-19 vaccine, as the country's stocks run out and supply prospects have become clouded by India’s curb on vaccine exports.

Dr. Samir Adhikari, deputy spokesperson for Nepal’s Ministry of Health and Population, said that among them, 1.3 million are elderly.

Nepal started its vaccination drive in January with 1 million doses of the AstraZeneca shot provided by India, which were administered to frontline health care workers.

The country later procured 2 million more doses of the AstraZeneca shots from the Serum Institute of India (SII), but so far only 1 million were received, which were administered to people above age 65 as first doses.

The SII had yet to deliver the remaining 1 million shots that Nepal was expecting to receive by the end of April and administer as second doses to the elderly in May, the spokesperson of the Ministry of Health and Population, Dr. Jageshwor Gautam said.

The SII said in a statement on Tuesday that it hoped to start delivering to COVAX and other countries by the end of this year.

“We are in communication with Indian side through diplomatic channel to get vaccines at the earliest possible date,” Gautam said adding there is no date yet for when the supply of vaccines will be resumed.

Gautam added Nepal has around 50,000 to 60,000 doses of Covishield – the Indian manufactured AstraZeneca vaccine – in storage for emergency purpose.

India reported 276,110 new cases of Covid-19 Thursday, according to figures released by the health ministry.

The country also reported 3,874 virus-related fatalities, with the total death toll now at 287,122. On May 19, India set a new record for the number of Covid-related deaths with more than 4,500 reported in 24 hours. The number of deaths reported each day in the country have been consistently above 3,000 since April 28.

A total of 186.9 million vaccine doses have been administered since India began its vaccination program on January 16. On Wednesday, the country distributed 1,145,569 vaccine doses.