Nepal has recalled retired medics to work for at least a year to help tackle the shortage of health workers as Covid-19 cases in the country rise.

Oli also announced a ban on exporting oxygen and said that private hospitals and clinics, along with more public hospitals, would be converted into specialized Covid-19 hospitals, whereas public venues like stadiums and schools would be used as quarantine centers.

According to a press release from the EU commission, the country breakdown of who is supplying what is as follows:

Following the call, Modi said in a tweet he had thanked the EU for its support and assistance to India's Covid response.

"We discussed India-EU Leaders’ Meeting on 8 May. I am confident that the Meeting will provide a new momentum to our Strategic Partnership," Modi added.

“They may or may not survive. Just because in the capital city of Delhi and because of want of oxygen,” he told CNN.

Hospitals are buckling under the overwhelming second wave of the coronavirus pandemic in India. There is an acute shortage of oxygen for medical treatment across India, especially in Delhi, where Gupta’s workplace, Batra hospital, is located.

The burden of the crisis also weighs heavy on the medical staff, including Gupta, who has been a practitioner for 45 years.

“We're dying inside. We're the saviors, not the murderers. We cannot express our feelings,” he said as he described how he felt seeing so many Covid-19 patients die due to the lack of oxygen.

Local and international efforts to get oxygen supplies to India's capital are still failing. India's central and national governments have been unable to explain the shortages, CNN's Sam Kiley reports.

Batra hospital has been advising patients to source their own oxygen to cover its erratic supplies. But as infections rise and oxygen supplies continue to remain in shortage, Batra hospital, like many others, will not admit more patients.

“We will not take more admissions because we don't want people to die in front of us. So they can go to other hospitals where the oxygen is available,” an employee of the hospital said.

Before the pandemic, Gayatri Khanna's Mumbai-based embroidery firm used to work on luxury garments and accessories for some of the world's biggest fashion houses. Now, she said, some of them won't even answer her calls.

These are people who we have spoken to for years and years," she said in a phone interview. "And suddenly there's no news, or even a 'What's going on?' Or, 'How is the business?'"

Amid a coronavirus crisis that is pushing India's hospitals to breaking point, collapsing demand for apparel in the West is also having a devastating knock-on effect on the country's craftspeople.

Luxury labels that have long depended on the intricate work of embroiderers and beading artists are scaling back production, leaving some suppliers unable to cover costs or pay workers.

Khanna, who is the founder and director of Milaaya Embroideries, said that her company's export business is down 70% on the previous year. Though there were relatively few canceled orders at the very start of the pandemic, new work quickly dried up as labels gave their limited business to "one or two" core suppliers, she said. 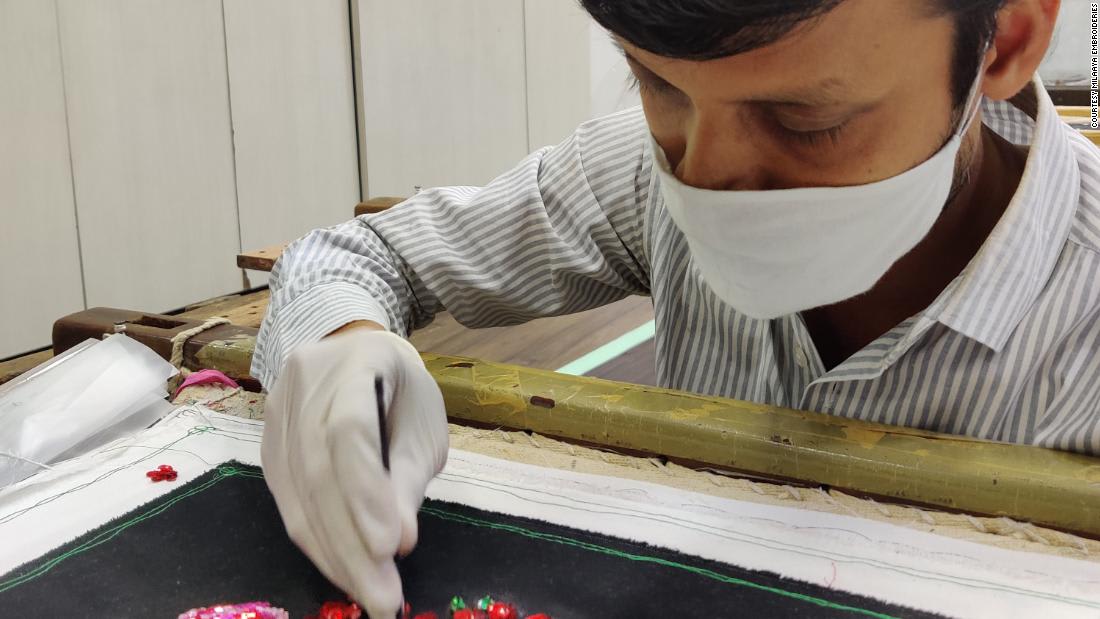 The Indian government has announced it call upon medical students to boost the availability of medical personnel as the country tackles a deadly second wave of coronavirus.

“The Prime Minister reviewed the growing need of adequate human resources for responding to the COVID-19 pandemic in the country today. Many important decisions were taken which will significantly boost availability of medical personnel in Covid duty,” read a statement issued by the Prime Minister’s Office on Monday.

The National Eligibility/Entrance Test-Postgraduate (NEET-PG), a medical entrance exam for postgraduate courses, has been postponed until Aug. 31.

Final year medical students will be used for providing services such as teleconsultation and the monitoring of mild coronavirus cases following orientation training under supervision of their faculty.

“This will reduce the workload on existing doctors engaged in Covid duty and provide boost to efforts of triaging,” read the statement, which added that students will be given one-month notice before their exams take place.

In addition, the services of final year post graduate students as residents will continue until newer graduates are available.

Nursing graduates are also included as part of the government’s plan to bolster personnel and will work under the supervision of senior doctors and nurses.

Medical interns will work under the supervision of their faculty.

The US Transportation Security Administration says it screened more than 1.62 million people at airports across the country on Sunday. The new record is nearly 10 times larger than the same day a year ago when numbers fell to the doldrums of the pandemic.

To meet what industry groups call “pent up” travel demand, flyers are facing fuller flights and airlines are bringing planes out of storage.

Delta Air Lines removed its block on middle seats starting Saturday — the last major airline to keep such a pandemic policy in place. American Airlines said it was bringing all of its airplanes in pandemic storage back online by last Friday.

Sunday numbers are typically the highest of the week, but numbers remain high overall. TSA has recorded more than million screenings per day for more than seven weeks straight.

The European Commission has today outlined plans that would allow fully vaccinated travelers from outside the European Union -- the EU -- to be able to enter the 27 countries of the bloc, a statement says.

Current restrictions, which bar travel from all but seven countries to the EU, have been in place since July 1 last year.

In a proposal published Monday, the commission recommends that, “Member States should allow travel into the EU of those people who have received, at least 14 days before arrival, the last recommended dose of a vaccine having received marketing authorisation in the EU.”

The vaccines which have currently received marketing authorization for use in the EU are: BioNTech/Pfizer, Oxford University/AstraZeneca, Johnson & Johnson and Moderna.

“Member States could also extend this to those vaccinated with a vaccine having completed the WHO emergency use listing process,” the statement added.

The proposal also suggests that if a European country has decided to waive requirements for testing prior to entry and quarantine periods for EU vaccinated citizens, that country, “should also waive such requirements for vaccinated travelers from outside the EU.”

How it would work: The Commission’s plan is to use the EU’s "Digital Green Certificate" once it becomes operational to facilitate travel to the Europe.

To obtain a certificate, international travelers will need to submit evidence that they have been vaccinated to the individual European country they intend to travel to.

Until the EU-wide "Digital Green Certificate" system is operational, countries would need to take “into account the ability to verify the authenticity, validity and integrity of the certificate and whether it contains all relevant data,” before granting a Certificate said the recommendation.

Also, in Monday’s proposal, the commission has recommended changing the rate of infection that is used as the main criteria for determining whether a country is on the EU’s safe list and is, “to take into account the mounting evidence of the positive impact of vaccination campaigns.” Currently there are only seven countries on the EU’s safe travel list.

“The proposal is to increase the threshold of 14-day cumulative COVID-19 case notification rate from 25 to 100 [per 100,00- inhabitants]. This remains considerably below the current EU average, which is over 420,” the statement said.

In the latest data from the European Centre for Disease Prevention and Control (ECDC), the United States has a notification rate of 258 so would not be added to the safe travel list, but the United Kingdom which has a rate of 47, would be considered under the new rules.

However, the Commission proposal does include a so-called "Emergency break," that “when the epidemiological situation of a non-EU country worsens quickly and in particular if a variant of concern or interest is detected, a Member State can urgently and temporarily suspend all inbound travel by non-EU citizens resident in such a country.”

Next steps: The plans will be discussed by the ambassadors of European countries on Wednesday, and the Commission hopes to implement the proposal by the end of June.

Once signed off the list of safe countries will be reviewed every two weeks.

Decisions about borders can only be made by individual countries, so each member state will decide whether to implement these proposals or not.

India’s Ministry of Health tweeted on Monday that media reports claiming the government had not placed new orders of Covid-19 vaccines were “incorrect and not based on facts.”

Vaccine manufacturing is a specialized process, it therefore not possible to ramp up production overnight," Poonawalla said. “ We also need to understand that the population of India is huge and to produce enough doses for all adults is not an easy task.”

“We understand that everyone wants the vaccine to be available in the quickest possible time,” he added. “That is our endeavour too and we are making every effort to achieve that.”

Serum Institute has delivered 150 million doses against an order of 260 million vaccines issued by the federal government, according to Poonawalla.

Biotech company Moderna on Monday announced an agreement with Gavi, the Vaccine Alliance, to supply up to 500 million Covid-19 vaccines doses in low and middle income countries.

The doses are being offered at Moderna's lowest tiered price, the company said. An initial 34 million doses are to be delivered in the fourth quarter of 2021, with an option for 466 million doses in 2022.

The agreement covers 92 countries partnered with COVAX, a global initiative to buy coronavirus vaccines in bulk and send them to poorer nations that can't compete with wealthy countries in securing contracts with the major drug companies. COVAX is an entity run by Gavi, the World Health Organization and the Coalition for Epidemic Preparedness Innovations, and is funded by donations from governments, multilateral institutions and foundations.

“I am grateful to our Gavi and COVAX partners for their tireless work and to the entire Moderna team for their collaboration to reach this agreement. This is an important milestone as we work to ensure that people around the world have access to our COVID-19 vaccine,” Moderna's CEO Stéphane Bancel said in a press release. “We recognize that many countries have limited resources to access COVID-19 vaccines. We support COVAX’s mission to ensure broad, affordable and equitable access to COVID-19 vaccines and we remain committed to doing everything that we can to ending this ongoing pandemic with our mRNA COVID-19 vaccine.”

In Moderna's press release, Gavi CEO Dr. Seth Berkley said he was pleased with the agreement, which will give COVAX access to another Covid-19 vaccine.

“Expanding and having a diverse portfolio has always been a core goal for COVAX, and to remain adaptable in the face of this continually evolving pandemic--including the rising threat posed by new variants. This agreement is a further step in that direction," he said.