The country has had more than 17.6 million cases since the pandemic began last year. But experts fear the the real number could be up to 30 times higher.

Grieving families are struggling to keep themselves and their loved ones safe amid an overwhelmed health care system, and medical workers are stretched thin as some hospitals run out of oxygen and supplies.

The global community is rallying to help India push back against the pandemic, with countries around the world offering aid.

You can help, too. Learn about charities in the article below and click here to donate. 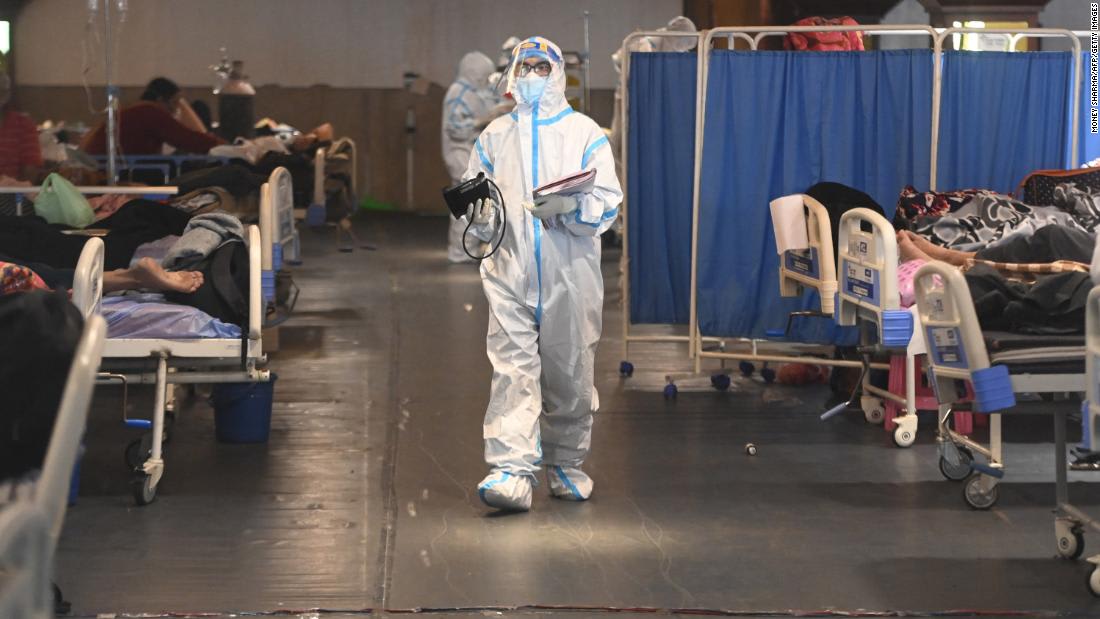 The coronavirus is ravaging India. Here's how you can help

National Security Coordinator for the Indo-Pacific, Kurt Campbell, said Friday that he briefed President Biden en route to Georgia Thursday about the administration’s response to the deadly Covid-19 surge in India, which includes rerouting filters for vaccine production from the United States to India.

“I did have the opportunity to travel with the President to Georgia yesterday. On the flight down, someone came back – I was resting – passed me a note and said the President wants to be updated on what’s going on,” Campbell said at a press avail at Dulles Airport ahead of another shipment of US supplies to India. “I was able to give a sense of what USAID is doing, what it hopes to accomplish. He said, ‘great, stay with it, stay with it.’”

The Biden administration has been consulting "nonstop" with the Indian government on their priorities as the country grapples with a catastrophic coronavirus surge that has left its health care system on the brink of collapse, US Agency for International Development senior adviser Jeremy Konyndyk told CNN Thursday.

At Friday’s press avail, Konyndyk noted that the US is, “at the request of the Indian government, rerouting filters that are a critical component of vaccine production from the US production of AstraZeneca to the Indian company, Serum Institute of India.”

“This will enable a significant expansion of the vaccine production in India,” he said.

The World Health Organization listed the Moderna Covid-19 vaccine for emergency use Friday.

This is the fifth coronavirus vaccine listed for emergency use by WHO. Covid-19 vaccines from Pfizer/BioNTech, AstraZeneca, the Serum Institute of India and Johnson & Johnson’s Janssen vaccine arm have also received emergency use listing.

The WHO grants emergency use listing to vaccines that have passed quality, safety and efficacy assessments. The listing helps some countries expedite their individual regulatory approval process for Covid-19 vaccines. Before receiving WHO's listing, Moderna’s vaccine had already received emergency use authorization in the US, Canada and several other countries.

Earlier in January, vaccine advisers to WHO reviewed the vaccine and recommended it for use in adults in interim recommendations.

WHO noted that the storage requirements of Moderna’s vaccine may eliminate the need for extra equipment. It can be kept unopened at normal refrigerator temperatures for a month, and Moderna said Thursday that data suggests its vaccine can be refrigerated for three months in 2-8°C temperatures.

“Vials can be stored refrigerated at 2–8 °C for up to 30 days prior to withdrawal of the first dose, meaning that ultra-cold chain equipment may not always be necessary to deploy the vaccine,” WHO said in a statement.

The Biden administration has not yet determined the criteria for allocating its vaccines to other countries, a top State Department official handling coronavirus efforts said Friday.

Gayle Smith, the coordinator for global Covid response and health security, said on a call with reporters that “there is huge demand for vaccine all over the world.”

“I think we certainly will be making a decision based on what impact we can have on the spread of the virus, where needs are most acute and what will be the most effective,” she said.

Asked by CNN if the administration has concerns about China and Russia outpacing the United States in terms of global vaccine distribution, Smith suggested that the US was not trying to use its vaccines for political gain.

“Both China and Russia are actively encouraging countries to buy their vaccines,” she said. “I think frankly, we expect them to market their vaccines. I can tell you that, from the United States’ point of view, our intent is not to market or encourage vaccines based on any political policy but because they're the best means of ending a pandemic.”

COVAX is run by a coalition that includes WHO and the Vaccine Alliance known as Gavi. It’s funded by donations from governments, multilateral institutions and foundations.

Its mission is to buy coronavirus vaccines in bulk and send them to poorer nations that can't compete with wealthy countries in securing contracts with the major drug companies.

During a panel discussion hosted by Physicians for Human Rights Friday, Swaminathan said that the issue has been that the supply of vaccines was all pre-booked by a handful of countries. She said WHO hoped contributions would improve in the second half of the year.

COVAX is run by a coalition that includes WHO and the Vaccine Alliance known as Gavi. It’s funded by donations from governments, multilateral institutions and foundations. Its mission is to buy coronavirus vaccines in bulk and send them to poorer nations that can't compete with wealthy countries in securing contracts with the major drug companies.

But while COVAX is trying to address the issue of access, access to vaccines remains inequitable. Of the 1 billion vaccine doses administered worldwide, 80% have been in high and upper middle income countries, Swaminathan said.

"About one in four or one in five people in high income countries across Europe, across North America have gotten some vaccine. For low income countries, it’s less than one in 100," Swaminathan told the panel.

"If we had distributed the 1 billion doses around the world, we could have protected the highest risk groups in every country," she said.

The safety and availability of Covid-19 vaccines created a false sense of security worldwide that the pandemic was ending, according to World Health Organization’s Chief Scientist Dr. Soumya Swaminathan.

“I think vaccines did create a false sense of security, to the extent that people around the world, even in countries that were not significantly vaccinating, thought that now the end of the pandemic had come because just because we had developed a number of vaccines and that they were proven to be safe and effective,” Swaminathan said in a panel discussion hosted by Physicians for Human Rights Friday.

Swaminathan said "vaccine euphoria," or the collective relief that Covid-19 vaccines were effective and rolling out, has led countries with small vaccinated populations to reopen and loosen restrictions.

“You relax your restrictions without having that herd immunity in the population, cases go up, deaths go up. So I think it's going to take us a while to vaccinate 70, 80% of the world's population. Until then, unfortunately, all of us will have to continue to be careful,” she said.

The United States has officially crossed the 100 million mark of people who are fully vaccinated, according to data from the US Centers for Disease Control and Prevention.

The Biden administration announced the country had reached the milestone during the White House Covid-19 briefing on Friday.

That’s about 2.8 million more doses reported administered since Thursday, for a seven-day average of about 2.5 million doses per day.

Note: Data published by the CDC may be delayed, and doses may not have been given on the day reported.

The rule requiring masks on all travelers in airports, airplanes, terminals, trains, buses and boats was set to expire May 11. The mandate now lasts until Sept. 13.

The TSA says it has received reports of 2,000 people who violated the rule, which took hold Feb. 2.

Canada confirmed Friday that future deliveries of the Pfizer vaccine will come from the United States, instead of Europe, signaling that the company may now be manufacturing a sufficient supply of its vaccine for the US.

Canadian officials said Friday that Pfizer is on track to significantly increase vaccine supply to Canada in the coming weeks with at least 2 million doses being delivered every week for the next two months.

"As of May 3rd the Canadian supply of the Pfizer BioNTech vaccine will come from its manufacturing site in Kalamazoo, Michigan," said Anita Anand, Canada’s minister in charge of vaccine procurement, during a news conference Friday.

Canadian Prime Minister Justin Trudeau said in a news conference Friday that at least 50 million doses in total will have arrived in Canada by the end of June, enough to give 2 doses to about 75% of Canadian adults. The number of doses that are expected to be delivered in Canada over the next month will nearly equal the total number delivered in the last 5 months.

Despite accelerated deliveries and distribution, public health officials say it’s "too early to celebrate" and vaccines will do little to help provinces currently struggling to stem infections during a tough third wave of the pandemic.

Worrying increases in intensive care unit admissions have been a reality in many provinces this week including in the provinces of Ontario and Alberta.

The province announced tighter restrictions Thursday and said it was considering a curfew.

Ontario also continues to struggle with hospital capacity, setting a record earlier this week for critical care patients and new, daily case counts seem to have plateaued at a very high level.

Federal officials say the news on vaccines is good, but restrictions on social gatherings, stay-at-home orders and business closures will be necessary for weeks to come.

"We need to be laser focused on two main things for community transmission in Canada, it’s keeping up with the public health measures and vaccinating as many Canadians as possible, that’s it, simple," said Canada’s Deputy Chief Public Health Officer Dr. Howard Njoo.