Turkey is bracing itself for its first national coronavirus lockdown as infection rates continue to climb in the country, now the highest in Europe.

The lockdown will begin on Thursday at 7 p.m. local time and will last through the remainder of the Muslim holy month of Ramadan and over the Eid al Fitr holiday. It is scheduled to end at 5 a.m. local time on May 17, according to a statement from the Ministry of Internal Affairs.

In the seaside town of Ayvalik on Thursday, the streets were thronged with shoppers stocking up on essentials before the three-week lockdown kicks into effect.

Hakan Keskin, a vegetable seller at the farmers' market in Ayavilik told CNN that "there are more people at the market today and they are buying more of everything." He added Thursday was the "last chance" for vendors such as himself to sell before the "3 hard weeks ahead."

"It's going to be difficult, our vegetables are going to get old and we won't be making any money," he said.

It's going to be hard days ahead for us."

Leyla Ilmen, who was shopping at the farmers' market, told CNN that there were "more people than usual" and that "everything is more expensive."

Turkey initially responded to a surge in Covid-19 infections back in early April -- when the country recorded its highest daily cases and deaths with more than 60,000 daily new cases -- by tightening some Covid-19 restrictions. But on Monday, the government took that step further by announcing the national lockdown.

The lockdown comes as the country faces expected delays in its vaccine rollout, according to Health Minister Fahrettin Koca.

To counter any delays in the campaign over the next two months, Koca said that the government had consequently decided to space out the two doses for the BioNTech/Pfizer vaccine.

The doses will be now be administered 6 to 8 weeks apart instead of the current interval of 28 days, the health minister said.

Koca added that there is also concern around the import of one of the variants first identified in India, known as B1.617.

"We identified 5 cases of the Indian variant in Istanbul. Those cases have been isolated and are under observation" Koca said.

Meanwhile, the highly transmissive UK variant, known as B.1.1.7, continues to be the most prevalent in Turkey, he said.

Despite being “a journalist who knows doctors” and one who can “pay for the best private medical treatment,” Dutt said she was unable to overcome the obstacles posed by India’s collapsing healthcare system.

In spite of her own personal loss, Dutt said that she felt she had a “duty” to shed light on the plight of “the orphans of the Indian state.”

In a moving interview, Dutt asks who will be held accountable for the “thousands that are dying," many of whom remain uncounted.

Germany’s intelligence service said on Wednesday it would put some members of the country’s anti-lockdown movement under surveillance as concerns grow that their movement is attempting to undermine the legitimacy of the state.

In a statement, Germany’s Federal Office for the Protection of the Constitution (BfV) said they are focusing on members of the ''Querdenker'' movement which promotes coronavirus scepticism, conspiracy theories and anti-vaccine rhetoric.

Interior Minister Horst Seehofer said the Querdenker movement has already shown a willingness to use violence and warned that extremists were “trying to take control of the movement.”

“Right wing extremists are trying to take control [of these events] - and what we cannot tolerate at all is violence,” the interior minister said at a press conference in Berlin on Wednesday.

The movement - whose name means “thinking outside the box” -- have been protesting anti-lockdown measures since the start of the pandemic and have ties to the far right.

During anti-lockdown protests, members frequently clashed with police and attacked members of the media.

The move comes as Germany reported an increase of 24,736 new coronavirus cases within the last 24 hours on Thursday, according to the Robert Koch Institute (RKI), Germany's national agency for disease and control prevention.

The death toll in Germany has risen by 264, according to RKI data, bringing the total number of Covid-19 deaths to 82,544.

About 13.3 million people applied for Covid-19 vaccinations in India on Thursday, the first day the vaccine was made available to everyone between the ages 18 and 44, according to the government's dedicated vaccination website, CoWIN.

CoWIN opened for registrations on Wednesday. As of Thursday at 12 p.m. local time, a further 4.15 million have registered to receive vaccinations.

India kickstarted its vaccination program in January for health care workers and priority groups, hoping to fully inoculate 300 million people by August. The start was sluggish due to logistical issues and vaccine hesitancy among the population – especially toward Covaxin, which was approved for emergency use before the efficacy data of its third phase trial were released.

As of Wednesday evening local time, 150,020,648 vaccine doses had been administered in India

There is a split scenario unfolding as the world battles the pandemic.

In countries like the United States and the United Kingdom, jubilant, newly-vaccinated people hug their loved ones after a long period of separation. In India, distraught families count their dead.

Sick people are being turned away from hospitals that have run out of beds and oxygen, as the number of new cases rises to record levels each day, creating a national crisis with global repercussions.

The more the virus spreads, the more chances it has to mutate and create variants that could eventually resist current vaccines, threatening to undermine other countries' progress in containing the pandemic, experts warn.

"If we don't help in India, I worry about an explosion of cases" around the world, said Dr. Ashish Jha, dean of the Brown University School of Public Health.

That's why India's Covid outbreak is a global problem that needs a coordinated response. 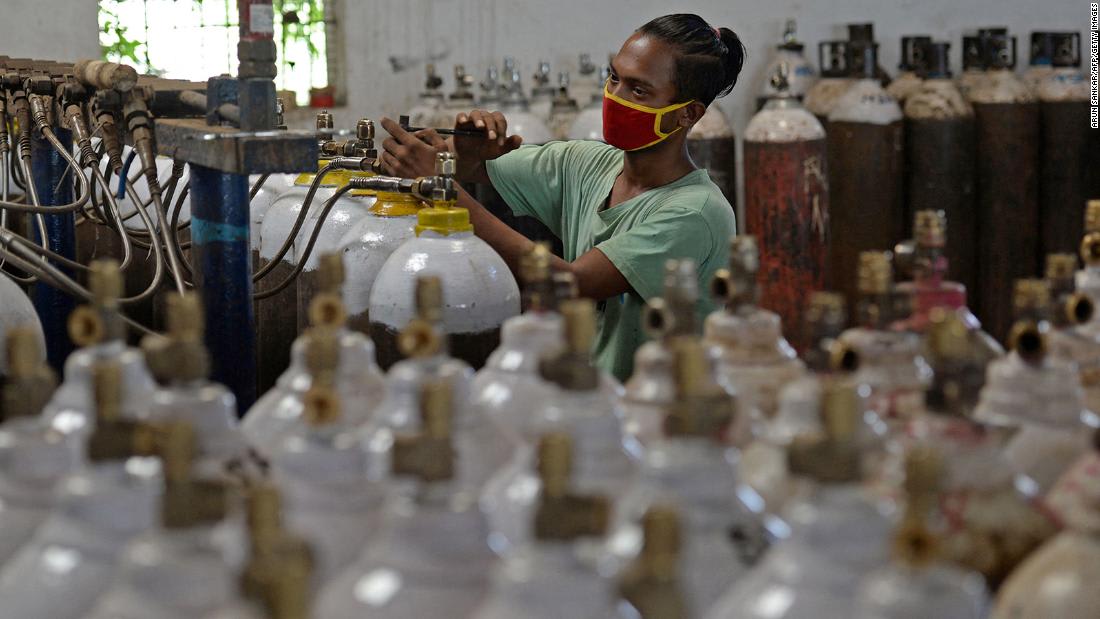 Analysis: India's Covid-19 crisis is a problem for the world

The latest restriction were imposed in mid-April. They limited travel in and out of the capital and shut many businesses outside of essential goods and services, according to CNN affiliate CNN Philippines.

Duterte apologized for the extension of restrictions and said Covid-19 has moved beyond a public health issue to one of national interest. Though he scolded people for violating health protocols, the outspoken leader said the ultimate blame remains with the government.

Duterte said lines are forming for admission to hospitals and that the government is running our of resources to provide aid to everyone.

India recorded 1 million Covid-19 cases over the last three days, pushing the total number of cases in the country to more than 18 million since the pandemic began, according to figures released today by the country’s Health Ministry.

Authorities reported 379,257 new coronavirus cases and 3,645 on Thursday, both new single-day records for India. It was the eight day in a row total cases topped 300,000

India launched its vaccination drive on January 16 and will open up vaccinations to everyone above the age of 18 on May 1. As of Wednesday evening local time, 150,020,648 vaccine doses had been administered.

India has the world's biggest vaccine producing capacity but is suffering a devastating second wave of coronavirus infections -- just as supplies of Covid-19 vaccines for its huge population are running low.

The government has purchased at least 205.5 million doses of Covid-19 vaccines, according to data from the Duke Global Health Innovation Center, placing India in the top 10 vaccine buyers in the world. But those shots would only cover 8% of its 1.4 billion population.

As of Tuesday, India had administered 147.7 million doses of Covid-19 vaccines, according to the health ministry. Some 2.4 million of those were given on that day alone, the ministry said.

While that sounds like a lot of shots, India ranks low in per capita vaccination, with only 11 doses administered per 100 people compared to 69 in the United States and Britain, according to Our World in Data. 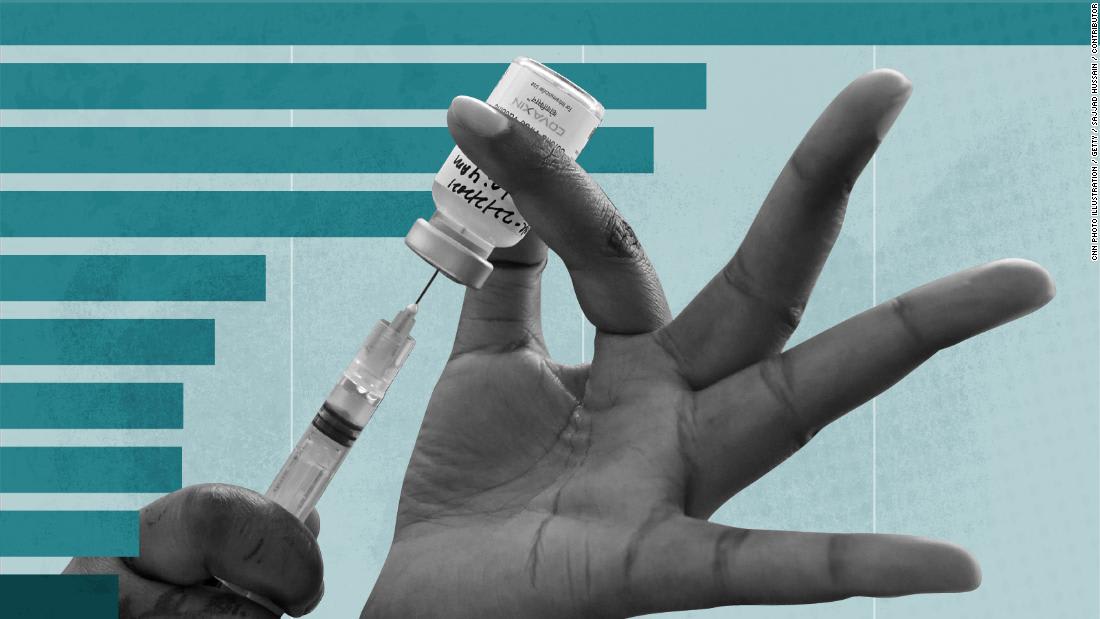 India is the world's top 10 buyer of Covid vaccines. It still has nowhere near enough

Indian Prime Minister Narendra Modi called for people to continue to come out "in line with Covid-19 protocols" and vote during the last phase of West Bengal state elections.

Modi and his Bharatiya Janata Party (BJP) have come under fire for holding several rallies ahead of the elections in West Bengal, with thousands in attendance and failing to abide by social distancing guidelines.

Critics have accused the BJP of putting politics before public health. India is now facing a massive new wave of Covid-19 cases across the country and nationwide shortages of oxygen.

On April 22, the Election Commission of India tightened restrictions for the remaining phases of the West Bengal state assembly elections, banning road shows, vehicle rallies and large public meetings with more than 500 people after finding political parties and candidates were flouting Covid-19 guidelines.

However, political parties – including the BJP – continued to hold rallies throughout the week, even as India continued to record more than 300,000 cases per day.

Southern Tamil Nadu and Kerala states, West Bengal and Assam states in the east and the union territory of Puducherry went to the polls on March 27, with voting taking place across eight phases and ending on April 29. All votes are to be counted on May 2, with the results announced on the same day, though India’s Election Commission has banned victory procession.

On Thursday, the Election Commission also issued guidelines ordering all polling officials and candidates to provide negative Covid-19 test reports or to have had both doses of Covid-19 vaccine ahead of May 2.