Dr. Robert Redfield, the former director of the US Centers for Disease Control and Prevention, told CNN's Dr. Sanjay Gupta he believes the origin of the Covid-19 pandemic is a lab in China — a controversial theory without evidence.

“If I was to guess, this virus started transmitting somewhere in September, October in Wuhan,” Redfield told Gupta in a clip that aired Friday on CNN New Day. “That's my own feelings. And only opinion. I’m allowed to have opinions now.”

Redfield, a virologist who led the CDC under former President Donald Trump, said he thinks the virus originated inside a lab in China and “escaped,” not necessarily intentionally.

There is no clear evidence to support the “lab leak” theory, although it has played an ongoing role in conspiracies and speculation, including statements from Trump. The World Health Organization has called it "extremely unlikely."

"Now, I am of the point of view that I still think the most likely aetiology of this pathogen in Wuhan was from a laboratory, escaped. The other people don't believe that. That's fine. Science will eventually figure it out. It's not unusual for respiratory pathogens that are being worked on in a laboratory to infect the laboratory worker," Redfield told Gupta.

Redfield’s comments appear in the documentary “COVID WAR: The Pandemic Doctors Speak Out,” which airs Sunday at 9 p.m. ET on CNN.

Most US states have announced plans to open up coronavirus vaccination to everyone eligible under US Food and Drug Administration emergency use authorization.

Just six states still have not told CNN when they plan to start vaccinating everyone 16 and older: Alabama, Arkansas, New Jersey, New York, Pennsylvania and Wyoming.

Another six states — Alaska, Mississippi, West Virginia, Utah, Georgia and Arizona — have already expanded coronavirus vaccine eligibility to anyone 16 and older, and a CNN analysis finds that at least 28 more plan to open up to people 16 and older by the end of April.

Here's a timeline of when states have said they will open vaccination eligibility to the general public: 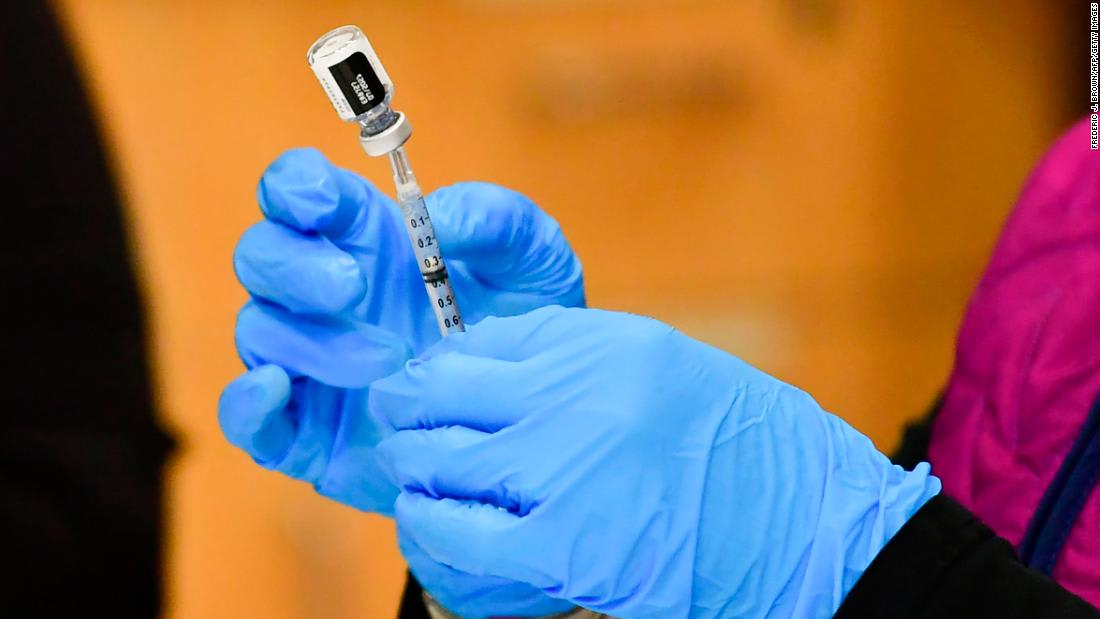 As some states open Covid-19 vaccines to all, many are still weeks away

European Union leaders met Thursday at a virtual summit designed to push AstraZeneca to speed up its deliveries of tens of millions of Covid-19 vaccines bound for the bloc, hoping to present a united front as it continues to wrangle with the drug giant over the shortfall.

But the virtual summit exposed tense divisions within the EU itself; several countries expressed concerns that doses are being distributed unfairly around the region, and part of the meeting was hijacked by Austrian Chancellor Sebastian Kurz, who demanded a greater share of shots for his country.

“We have worked hard to ensure that the gap within the #EU in terms of vaccination coverage for the population does not widen any further," Kurz tweeted after the meeting, adding that he expects "a fairer delivery of vaccines in the EU" in the coming months.

What the EU agreed: The EU has been engaged in a tense back-and-forth with AstraZeneca over vaccine supplies to the bloc after the firm said it would not be able to meet its full delivery targets.

That shortfall has led to internal squabbles over which countries are prioritised when sought-after vaccine deliveries arrive. EU leaders agreed Thursday to tighten rules to allow for an export ban on vaccines but has so far stopped short on actually imposing a ban.

In a swipe targeted at Britain, she added that she had "no knowledge so far of UK exports," essentially accusing it of implementing a de facto export ban. Von der Leyen said she was "waiting for that transparency."

The UK's vaccine rollout has far outpaced Europe's, but the country, which recently left the EU, relies on exports from the bloc for some of its doses.

“The bottom line is: we invite others to match our openness,” von der Leyen said.

The background: Rising coronavirus infection rates across much of Europe have created an increasingly dire backdrop to the quarrelling. France imposed tougher restrictions on social gatherings on Thursday as it battles a third wave of Covid-19, while sharp rises in case loads have been reported this week in Germany, Poland and the Netherlands.

Von der Leyen said she still expects to achieve the goal of vaccinating 70% of the EU's adult population by this summer.

“But of course we all know we could have been much faster if all pharmaceutical companies had fulfilled their contracts,” she added.

France will allow veterinarians and dentists to give Covid-19 vaccines in order to “speed up the campaign,” the French national health authority (HAS) said in a press release Friday.

“The arrival of additional doses of vaccines will make it possible to carry out vaccinations on a larger scale as of April and require the mobilization of more professionals in order to rapidly vaccinate all those concerned,” the agency said.

These new categories of health workers vaccinating comes in addition to doctors, nurses, pharmacists and medical students, including those who have retired. Most will be receiving a training specific to the Covid vaccines.

France is in the midst of a third wave of coronavirus infections, and its stalling vaccination campaign has done little to stem the tide.

On Thursday, Prime Minister Jean Castex described the situation in Paris as "extremely worrying," and the country has banned outdoor gatherings of more than six people in an effort to reduce transmission.

India has reported its highest jump in new Covid-19 cases since last year for a third consecutive day.

On Friday, the country reported 59,118 new Covid-19 cases, its highest rise since October 18, according to a CNN tally of figures from the Indian Ministry of Health.

The country has been reporting more than 35,000 new cases daily for over a week in a recent surge in infections after they fell in January and February this year.

Randeep Guleria, director at the All India Institute of Medical Sciences, told CNN on Wednesday "it is the beginning of a second wave."

India has reported more than 11.8 million total cases of coronavirus including over 160,000 virus-related deaths, according to the Ministry of Health. The country has distributed more than 55 million doses of Covid-19 vaccines.

At least 10 people were killed in a fire Friday at a Covid-19 hospital in a Mumbai mall, senior police official Prashant Kadam said.

"At around 12:30 a.m. at night, a fire broke out on the first floor at Dream Mall, next to it there was Sunrise Covid care center where about 76 Covid patients were admitted," Kadam told reporters early Friday.

Mumbai Mayor Kishori Pednekar said Friday patients had been evacuated to another facility and the cause of the fire was being investigated.

Sunrise Hospital has described itself as the first hospital in Asia to be located in a mall.

New cases: Mumbai reported 5,504 new Covid-19 cases on Thursday, bringing the total to 380,115 in the city. According to the Indian Ministry of Health, Maharashtra state, of which Mumbai is the capital, contributed more than 50% of the new cases reported in the country on Thursday.

Mumbai is the district with the third-highest active cases across the country, the Ministry of Health said Wednesday.

The Philippines recorded its highest number of new Covid-19 cases in a day on Thursday, according to CNN affiliate CNN Philippines. This the fourth time in two weeks the country has reported a record number of new cases.

Argentina is suspending all incoming flights from Brazil, Chile and Mexico starting Saturday, “due to increasing cases of coronavirus in those countries,” Argentina’s state-news agency Telam reported Thursday.

The new measures will strengthen protocols for returning Argentinian nationals, while maintaining the ban on foreign tourists entering the country, according to Telam.

All travelers will have to be tested for Covid-19 before boarding the plane to Argentina. They'll then need to be tested again on arrival and again seven days after entering the country, according to Argentinian authorities.

In the case of a positive test result, the patient will have to be isolated at a place designated by the Argentinian government. All Covid-19 testing and stay costs are the responsibility of the traveler, says the statement.

“For those who return from abroad, it will be compulsory to isolate for 10 days, counting from the day of the first [Covid] test in the country of origin, and it will be [closely watched] that those who returned from a trip are complying with isolating at home.”

Argentina had already suspended incoming flights from the United Kingdom, according to the statement.

Colombia authorized emergency use of Johnson & Johnson's Covid-19 vaccine on Thursday, according to a statement from the country’s health regulatory agency, INVIMA.

The statement said the vaccine had undergone clinical trials in Colombia, and more than 5,800 volunteers in different institutions across the country had participated.

According to INVIMA, this is the third Covid-19 vaccine to receive authorization for emergency use in the country.