Largely due to the coronavirus pandemic, the year 2020 appears to have been the deadliest in the recorded history of the United States – at least since the year 1900, according to early data from the US Centers for Disease Control and Prevention.

The CDC confirmed to CNN in an email on Thursday that an agency analysis suggests that 2020 was the deadliest year in recorded history in terms of total number of deaths, and there was a 15% increase in the US death rate last year due to the pandemic. "We are working on a future report, but the underlying data on which the report is based are already available from our website," a CDC spokesperson wrote in the email.

The upcoming report will be published in an issue of the CDC's Morbidity and Mortality Weekly Report, and it will detail the rates at which deaths occurred by race, age and other demographic groups, the CDC confirmed to CNN via email.

For now, provisional data online show that last year, more than 3 million people – specifically, 3,362,151 – died from all causes in the United States. Among those deaths, 378,292 involved Covid-19, according to the data. With the US population being around 330 million people, about 3.3 million deaths represent 1% of the nation's total population.

The provisional data note that total deaths in 2020 were 18% higher than expected relative to recent years, according to the data on the CDC's website.

Overall, the year "2020 will have been the deadliest by far as long as we’ve kept records and almost certainly as long as the U.S. has existed," Bob Anderson, chief mortality statistician for the CDC, told CNN on Thursday. But he added, "the population is much larger, so if you mean in terms of risk of dying, then you have to account for population growth and also aging of the population."

In January, CDC statisticians shared with CNN that Covid-19 was likely the third leading cause of death in the United States last year, following heart disease and cancer.

Life expectancy in the United States also dropped a full year in the first half of 2020, according to a provisional report published by the CDC's National Center for Health Statistics in February. The report shows that US life expectancy fell to 77.8 years, back to what it was in 2006.

Italy's main train operator aims to have "Covid-free" rides to tourist destinations by the summer. Passengers and staff will have to test negative before boarding and should arrive at the station an hour ahead of departure.

"We will launch a Covid-free train at the start of April," said Gianfranco Battisti, CEO of state-owned Ferrovie dello Stato Italiane. "We have chosen the Rome to Milan route for the initial testing phase. Then we will implement this for tourist destinations for the summer."

The company is working with the Red Cross and Italian Civil Protection on the testing. A spokesperson for Trenitalia told CNN it could not immediately confirm details. However, it is expected that the Rome-Milan tickets will go on sale in the near future, on the high-speed Frecce trains. 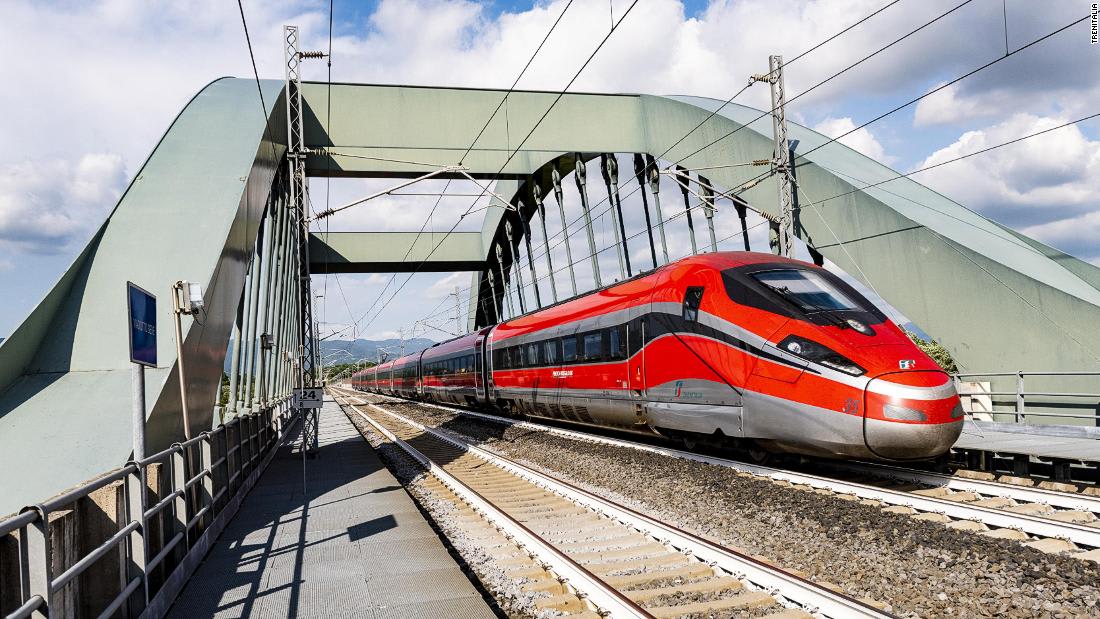 Based on the analysis of 130 studies on school reopening, including studies focused on the physical, academic, and emotional toll school closures have had on students, schools can safely reopen now, if they follow mitigation strategies like mask wearing and social distancing, according to a new report.

The report, Is it Safe to Reopen Schools? An Extensive Review of the Research, was written by education and policy expert John Bailey, and co-sponsored by United States of Care, Opportunity Labs, the Evidence Project at the Center on Reinventing Public Education (CRPE), COVID Collaborative, the American Enterprise Institute (AEI), and the Walton Family Foundation.

The report also covers the findings around the risk of children contracting Covid-19 in school, the possibility of community spread, academic losses and the more severe impact that’s having on communities of color.

One year ago tomorrow, Ohio became the first state to announce it would close all public schools due to growing concerns over the spread of the novel coronavirus. One year later, many school districts are still doing full remote learning as the debate over safely reopening continues.

“It seems like it was easier to close schools than it was to figure out when and how they should reopen,” said Bailey at a virtual news conference Thursday. “We are a year into this, and we still have schools that are closed, and some that are trying to figure out how to reopen.”

The report also examines how reopening schools has been tied to the potential strain on hospitals and health systems.

“Our ability to reopen schools is directly related to what the health system capacity is,” said Dr. Mario Ramirez, an emergency physician who worked with the Obama administration during the Ebola outbreak.

“As the case counts have come down, and as our health system capacity has increased, and we've actually instituted a lot of these protective health measures, I do think we can open schools,” Ramirez said.

Part of the debate that has recently emerged is regarding social distancing, and whether schools should space kids six feet apart as the CDC recommends, or whether three feet of distance is sufficient. For many school districts, this difference will be a key component for reopening, as most don’t have space for six feet of distancing with all their students present.

According to Bailey, school districts in Indiana, Virginia, and Massachusetts have all adopted a three foot standard instead of six feet.

Those states “have not seen a surge of cases that you would expect if somehow that protection was less adequate,” Bailey said.

More than 98 million doses of Covid-19 vaccine have been administered in the United States, according to data published Thursday by the US Centers for Disease Control and Prevention.

That’s nearly 2.5 million more administered doses reported since yesterday, for a seven-day average of more than 2.2 million doses per day.

Note on the data: Data published by the CDC may be delayed, and doses may not have been given on the day reported.

A new study in Brazil identified two cases of people simultaneously infected with two different strains of the coronavirus. The study was published online and will appear in April’s edition of Virus Research.

Here's what the study found:

According to the study, the concern with co-infection is not due to the worsening of the disease, but to the possibility of recombination of the genomes of the different strains, which can generate new variants of the coronavirus.

Meanwhile, a second wave of Covid-19 is ripping through Brazil, pushing hospitals and intensive care units toward collapse and claiming a record numbers of daily deaths.

While a new variant of the coronavirus spreads throughout the country, many Brazilians continue to defy mask mandates mobility restrictions following the example of President Jair Bolsonaro, who recently said people need to "stop being sissies" and "whining" about the virus.

President Biden and other top officials will promote the coronavirus relief package next week by hitting the road on what the White House press secretary Jen Psaki called the “Help is Here Tour.”

On Wednesday, Emhoff will travel to Albuquerque, New Mexico, and on Friday, the President will join Harris in Atlanta, Georgia.

“During their trips, they will discuss the benefits of the ARP for working families,” Psaki said, adding that they “will engage with people at each of these stops about how the American people can benefit from the component of the package.”

She said they will talk about the $1,400 stimulus checks, which will begin to be deployed “as early as this weekend,” as well as the child tax credit, the extension of unemployment insurance, rental and homeowner assistance, the expansion of the earned income tax credit, health insurance subsidies, “and of course the fact that the bill will lift 11 million people out of poverty and cut child poverty in half.”

An internal memo obtained by CNN's Phil Mattingly says the White House will deploy messaging to “every corner” of the country with the President, vice president, first lady, and second gentleman, as well as Cabinet members and top officials.

For 10 days, administration officials will focus on one element of the bill per day, from the stimulus checks and emergency unemployment insurance extensions, to vaccine distribution and reopening schools.

This moves up the previous timeline from the administration, which was that checks would only begin to go out at the end of the month.

Psaki said the checks will begin to hit bank accounts this weekend for those who have their direct deposit information on hand at the Treasury Department and the IRS.

Vaccine maker Moderna says it hopes to have results on a Covid-19 vaccine booster by May, possibly earlier.

"We would certainly want to have, by the summer, that early data showing whether or not a variant-specific ... update to the vaccine – a vaccine 2.0, if you will – Covid vaccine 2.0 – provides a better advantage to boosting than other approaches," Moderna President Stephen Hoge said at the Barclays Global Healthcare Conference Thursday.

As part of its Phase 2 study, 60 participants who were already vaccinated with Moderna’s original Covid-19 vaccine will be given a booster dose of the modified vaccines the company is testing.

Moderna’s Covid-19 vaccine is currently authorized for emergency use in the US. Though the vaccine was shown to provide protection against virus variants, it did show a six-fold decrease in the antibody response created against the B.1.351 variant, first identified in South Africa.

Moderna says it’s developing a strategy to address these emerging variants out of an abundance of caution.

Samantha Schacher, host of "Daily Blast Live," described the tough situation her family has been in since her 51-year-old brother-in-law, Eric, was put into a medically induced coma after suffering complications from coronavirus as "cruel."

“I never thought that my family would go through this. …He is a surfer, a snowboarder, [has] strong lungs. And Covid is cruel,” she told CNN's Brianna Keilar.

Schacher, of Denver, Colorado, is advocating for her brother-in-law who is in need of a double lung transplant. She said doctors have said Eric's lungs are "no longer compatible with life." Schacher said she feels like she has the responsibility to do so since Eric and her sister advocate for others as health care workers: "Now it's my turn... to help advocate for him."

"Eric no longer has Covid. He cleared his Covid load because he's so strong way back in January, so these are all Covid complications. And now we're in a position where, we've run out of options. And we have a very healthy guy otherwise, who can't come home to his —my sister, his wife and their two babies, because of his lungs," she explained.

And on the one year anniversary of when the pandemic became official, Schacher has this message for people:

"I hope this is a cautionary tale because I know a lot of people are lowering their guard because we have spring break coming up, the vaccine is here, but we're not out of the woods. And I don't want another family to go through this, because it can happen to you. If you don't think it's going to happen to you, it can. Look at me, look at our story. You do not want to go through this. It is excruciating," she said.