Our live coverage has ended. Follow the latest on the coronavirus pandemic here.

In the first three months since the first Covid-19 vaccine shot was administered in December, the US government has delivered about 73.4 million doses to states and jurisdictions, according to the latest data from the US Centers for Disease Control and Prevention.

Pfizer/BioNTech and Moderna have each promised to deliver 200 million doses to the US by the end of May, for a total of 400 million doses. That’s enough to fully vaccinate 200 million people – or about 60% of the US population before summer.

The next three months will bring us into late May. If the US is able to distribute all of the doses they’ve received from Pfizer/BioNTech and Moderna by then, the pace will have picked up by about three times what it was in the first three months.

The Johnson & Johnson vaccine is expected to present trial data to the US Food and Drug Administration next week for emergency use authorization. The company has promised to deliver 100 million doses of its single-dose vaccine to the US by the end of June.

Along with another 100 million doses promised from Moderna for the end of July, an additional 150 million people could be fully vaccinated, enough to cover the full US population.

Walgreens will receive more than 480,000 Covid-19 vaccine doses per week from the US federal government starting on Feb. 25, the company announced Friday.

This more than doubles the pharmacy’s previous weekly allocation of 180,000 doses.

Walgreens says it will conduct vaccine administration in a total of 26 states and territories.

The company also said it had administered more than three million Covid-19 vaccines in long-term care facilities and “vulnerable populations.”

Pfizer-BioNTech says it has submitted new data to the US Food and Drug Administration to show that its Covid-19 vaccine can be stored at warmer temperatures.

In a news release Friday, Pfizer said this new data demonstrates its vaccine can be stable when stored between -25 degrees Celsius to -15 degrees Celsius for two weeks – the temperature of more common refrigerators and freezers.

This submission is in hopes the company’s EUA would be updated to include these warmer two-week storage options.

“We appreciate our ongoing collaboration with the FDA and CDC as we work to ensure out vaccine can be shipped and stored under increasingly flexible conditions. If approved, this new storage option would offer pharmacies and vaccination centers greater flexibility in how they manage their vaccine supply,” Pfizer CEO Albert Bourla said in the company’s release.

A prominent German health expert and politician said he is backtracking on his offer to volunteer at a Covid-19 vaccination center after receiving threats.

“I wanted to start my shift as a vaccine doctor in Leverkusen on Friday. Unfortunately, there were so many announced protests against the Leverkusen Vaccination Center beforehand that I had to cancel the start for the time being. Police and security authorities saw danger,“ the politician, Karl Lauterbach, tweeted on Friday.

Lauterbach went on to say that he decided to take a step back in order not to endanger the employees of the center, but added he feels "it is a pity how much the influence of radical minorities on our actions is now growing."

Lauterbach, who is also a scientist, is a member of the Social Democratic Party, which is part of Chancellor Angela Merkel’s government. He said last week he would be working as vaccinator in Leverkusen, a city in North Rhine-Westphalia, and would himself take the AstraZeneca shot to "make a clear commitment" to using the "safe and good" vaccine in Germany.

Germans have been reluctant to take the AstraZeneca vaccine after a European Medical Agency analysis gave it about 60% efficacy -- though AstraZeneca's own findings, based on a larger number of clinical trials, put it at over 76% after the first dose. The country's vaccine commission also said last month the shot should not be given to people aged over 65 years old due to lack of data on its effectiveness in that age group.

As the United Kingdom celebrates giving at least one dose of the coronavirus vaccine to 15 million people and the EU surpasses 23 million doses distributed, several other European countries have not yet managed to put a single shot in arms.

Kosovo, Montenegro, and Bosnia and Herzegovina are still waiting to receive their first vaccine shipments, while rollouts in Albania and Northern Macedonia have so far been limited to a few hundred people.

The Western Balkan countries are key allies and possible future members of the European Union, but they have been left out of the bloc's immediate vaccine supply plans.

The EU has secured more than 2.3 billion doses of various coronavirus vaccines and said it expects to share some of those with others. It also set aside €70 million ($85 million) for the Western Balkan region to purchase some of these doses in the future, but since its own rollout has been slow and delayed, those countries are still waiting.

And as relatively wealthy countries -- at least in the global context -- they are also not a top priority for programs designed to help the world's poorest countries access vaccines, which is expected to be a key discussion point at Friday's G7 virtual meeting.

Faced with the possibility of a long wait, some Balkan countries are taking matters into its own hands and looking for vaccines elsewhere. China and Russia are ready to step in. 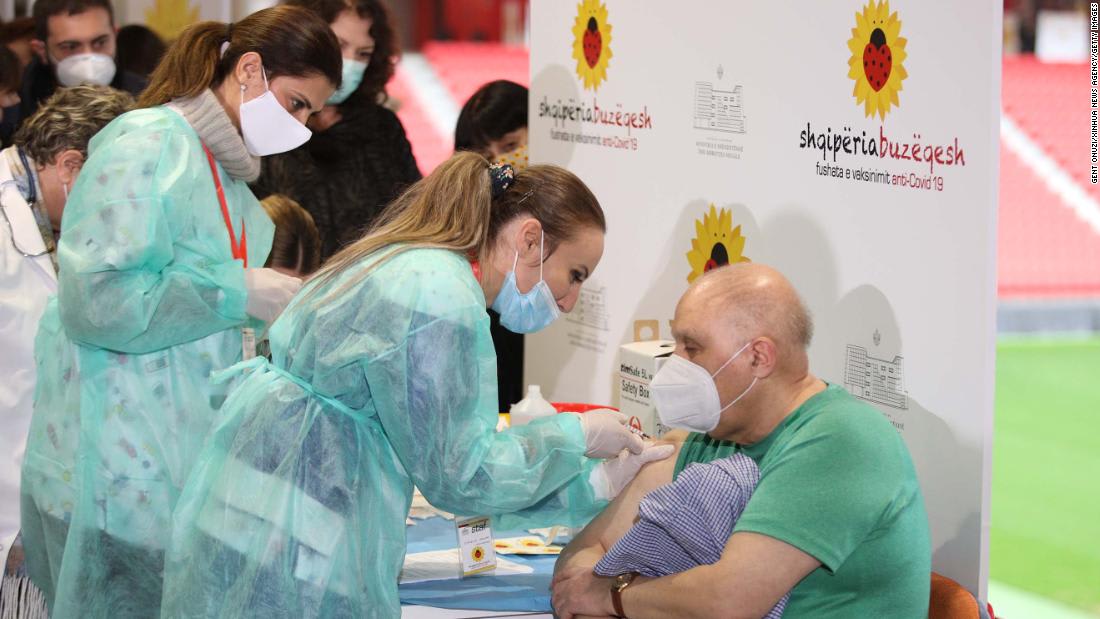 The European countries caught in a vaccine no man's land

European countries should allocate 4-5% of their vaccine supply to developing countries, French President Emmanuel Macron has urged ahead of the G7 virtual meeting Friday where the issue is expected to be discussed.

In an interview with Financial Times, Macron said the battle for vaccine supply had caused "a new form of unsustainable inequality" to emerge between developed and developing nations.

“We are allowing the idea to take hold that hundreds of millions of vaccines are being given in rich countries and that we are not starting in poor countries," Macron said.

Macron stressed that inequality in vaccine distribution would also be "politically unsustainable" as it’s paving the way for "a war of influence" over vaccines, referring to China and Russia, which already began supplying their vaccines to countries in Latin America and Africa.

"We’re not talking about billions of doses immediately, or billions and billions of euros," Macron said, adding that countries just need to "reallocate some tens of millions of doses" to Africa in particular "very quickly.”

Macron said it would be in the bloc’s “interest” to allocate a "tiny sample" of 4-5% of European vaccine supply, and vowed to take on big pharma companies not willing to "play the game of cooperation."

The French president has so far secured the support of German Chancellor Angela Merkel and hopes to convince "our American friends" who have "greater production capacity" to contribute to the effort.

UK Prime Minister Boris Johnson is expected to pledge to donate most of the country's surplus vaccine supply to poorer nations in the G7 meeting, the British public broadcaster, the BBC, reported earlier on Friday.

The UK, which has the population of about 66 million, has ordered more than 400 million doses of various vaccines, so a surplus of doses will be available after all adults are vaccinated.

20.5 million years of life have been lost to Covid-19 globally, according to a new study looking at the mortality impact of the virus.

Researchers analyzed 1.2 million deaths from Covid-19 across 81 countries, looking not only at the number of dead, but how premature those deaths were.

They found that on average:

The study, published in the scientific journal Nature, says that analyzing years of life lost is “crucial in that it assesses how much life has been cut short for populations affected by the disease.”

The researchers also note that the results “confirm the large mortality impact of COVID-19 among the elderly” and call for heightened awareness in devising policies that protect vulnerable demographics losing the largest number of life-years.

Hong Kong received its first batch of Sinovac Covid-19 vaccine from Beijing on Friday, according to a government live feed showing a Cathay Pacific plane with one million doses on board arriving at Hong Kong International Airport.

Hong Kong authorities announced Thursday that priority groups will start to be vaccinated on February 26.

In total, the city of more than seven million people has recorded 10,820 Covid infections and 197 deaths, according to the tally by Johns Hopkins University.

Another one million doses of the Pfizer/BioNTech vaccine, manufactured in Germany, are also expected to arrive in Hong Kong by the end of February, authorities said.

In January, Sinovac was revealed to have an efficacy rate of just 50.38% in late-stage trials in Brazil -- significantly lower than earlier results showed. That rate only barely crosses the 50% efficacy threshold as set by the World Health Organization, and far lower than the 78% previously announced to much fanfare in China earlier this month.

Russia's Foreign Ministry has invited all diplomatic missions and representatives of international organizations accredited in the country to get inoculated with a Russian-made vaccine.

“The practice of inviting the diplomatic corps to get vaccinated against coronavirus is common in many countries... The Russian Foreign Ministry is no exception,” the ministry’s spokesperson, Maria Zakharova, said in a briefing Thursday.

Zakharova added that the ministry is also working on delivering the vaccine to Russian diplomats and their families residing abroad.

“This work is based on the principles of voluntary [inoculation] and staff retaining the right to choose an alternative vaccine,” Zakharova said. “The possibility of delivering a Russian vaccine to a particular country or using a locally-produced shot as well as the availability of the necessary medical infrastructure in Russian foreign institutions are all taken into account.”

In late December, the Russian Foreign Ministry offered US Ambassador John Sullivan a shot of Sputnik V vaccine in a tongue-in-cheek tweet after he posted his Christmas wish-list that mentioned a Covid-19 vaccine.

The spokesperson for the US Embassy in Moscow, Rebecca Ross, tweeted back saying that the Ambassador thanked the Russian Foreign Ministry “for its offer of a vaccine, however would not want to take a Sputnik V dose meant for a Russian citizen.”

"We're grateful that two US vaccines are now approved, and already helping people fight Covid-19 across the EU, UK, Latin America, and US," Ross said.