Investigators from the World Health Organization looking into the origins of coronavirus in China have discovered signs the outbreak was much wider in Wuhan in Dec. 2019 than previously thought. They are urgently seeking access to hundreds of thousands of blood samples from the city that China has so far not let them examine.

The lead investigator for the WHO mission, Peter Ben Embarek, told CNN in a wide-ranging interview that the mission had found several signs of the more wide-ranging 2019 spread, including establishing for the first time that there were over a dozen strains of the virus in Wuhan already in December.

The team also had a chance to speak to the first patient Chinese officials said had been infected, an office worker in his 40s with no travel history of note, reported infected on Dec. 8.

The slow emergence of more detailed data gathered on the WHO's long-awaited trip into China may add to concerns voiced by other scientists studying the origins of the disease that the virus may have been spreading in China long before its first official emergence in mid-December.

Ben Embarek, who has just returned to Switzerland from Wuhan, told CNN:

"The virus was circulating widely in Wuhan in December, which is a new finding."

He explained that Chinese scientists presented his team with 174 cases of coronavirus in and around Wuhan in Dec. 2019. Of these, 100 had been confirmed by laboratory tests and another 74 through the clinical diagnosis of the patient's symptoms.

Ben Embarek said it was possible this larger number – of likely severe cases that had been noticed by Chinese doctors early on – meant the disease could have hit an estimated 1,000-plus people in Wuhan that December.

Ben Embarek said the mission – which comprised 17 WHO scientists and 17 Chinese – had broadened the type of virus genetic material they examined from early coronavirus cases that first December. This allowed them to look at partial genetic samples, rather than just complete ones, he said. As a result, they were able to gather, for the first time, 13 different genetic sequences of the SARS-COV-2 virus from Dec. 2019. The sequences, if examined with wider patient data in China across 2019, could provide valuable clues about the geography and timing of the outbreak before December.

Ben Embarek said: "Some of them are from the markets... Some of them are not linked to the markets," which includes the Huanan seafood market in Wuhan, thought to have played a role in the virus' first spread. "This is something we found as part of our mission... part of the interaction we had all together."

Iraq has announced a number of restrictions "in light of the increasing number of infections among citizens" to contain the spread of coronavirus.

The country will impose a curfew between Feb. 18 and March 8, according to a statement released by the Iraqi cabinet Saturday night.

Muslim worshippers are not allowed to pray inside mosques starting Feb. 18, the statement said.

What the numbers show: Iraq has reported a total of 641,628 cases and 13,164 coronavirus-related deaths since the beginning of the pandemic, according to data from Johns Hopkins University.

Lebanon is starting its coronavirus vaccination campaign today, with 90 staff members at the Rafiq Hariri Hospital in Beirut set to be inoculated.

The first person to get the vaccine is Dr. Mahmoud Hasoun, the head of the Covid-19 ward, according to hospital spokesman Nisreen Husseini.

The vaccinations will take place in 10 cubicles at the hospital complex, with ambulances parked nearby in case anyone experiences side effects.

He also said authorities should avoid "Wasta" to fast-track getting the vaccine – an Arabic term referring to using one’s connections or influence. A total of two million doses will be delivered in the coming weeks, he said on Twitter on Saturday.

Lebanon's first shipment of the Pfizer/BioNTech vaccine landed at the Beirut International Airport early Saturday evening and was received by Minister of Health Hamad Hassan.

Saudi Arabia is extending its Covid-19 restrictions for at least 20 days to contain the spread of coronavirus, according to the state-run Saudi Press Agency.

The country announced initial restrictions 10 days ago. The extension will begin today, and could be further extended again, SPA reported Sunday, citing the country’s Interior Ministry.

"The maximum for human gatherings in social events cannot be exceeded to 20 persons, to stop all entertainment activities and events, closing down cinemas, indoor entertainment centers, and independent indoor playgrounds or places in restaurants, malls, gyms, and sports centers. Suspending dining in services in restaurants, cafes and limiting it to pick up services," SPA said in its report.

Saudi Arabia has reported a total of 372,410 cases and 6,429 related deaths since the beginning of the pandemic, according to a tally by Johns Hopkins University.

When Riëtte Badenhorst got home from her cancer surgery in South Africa, all her fiancé Steve Mann could do was comfort her on the phone, all the way from the UK. Riëtte wishes he had been with her.

Badenhorst and Mann began dating in 2016 and got engaged three years later. They have not seen each other in more than a year, even after Badenhorst cancer diagnosis.

They're among many unmarried couples of differing nationalities who, separated by coronavirus travel bans, will spend this year's Valentine's Day apart from their loved ones.

It began last March when rising concerns over the virus prompted the United States to introduce restrictions on most travelers from Europe's Schengen area and Brazil.

Many other countries introduced their own travel bans. Most allowed exemptions, but only for spouses -- leaving unmarried partners and their families in limbo. 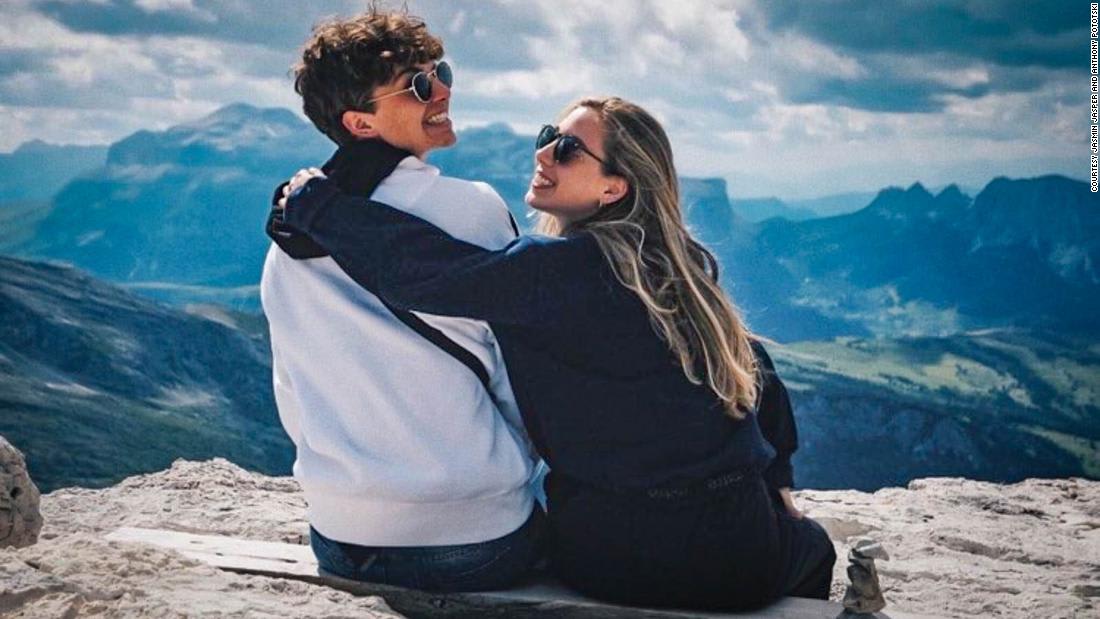 They love each other but Covid has torn them apart

Lebanon's caretaker Prime Minister Hassan Diab said he would not have the Covid-19 vaccination as planned in order to give priority to the health sector.

The country Sunday kicked off its Covid-19 vaccination campaign, one week shy of the anniversary of the first recorded case of coronavirus there.

Diab on Sunday addressed doctors, nurses and the health sector at Beirut’s Rafik Al-Hariri University Hospital, saying: "In compliance with the program of the National Committee for Vaccination and the schedule, I will not receive the vaccine today, because the priority is for you, the health sector, to which we must provide protection from this danger so that it can continue its mission in order to protect people."

Change of tune: Earlier Sunday, the hospital announced that Diab was first in line to receive Lebanon’s first vaccine, but the PM told CNN’s Ben Wedeman he decided not to do so, in favor of frontline health staff. The first to receive the vaccine in Lebanon on Sunday was the head of the hospital’s intensive care unit, Dr. Mahmoud Hassoun, the hospital spokesperson told CNN.

"You are the unknown soldiers who have been carrying this great burden for a year, and you were at the level of responsibility, and you made sacrifices, and there are those who paid with their lives for this message to protect people from the threat of the deadly epidemic," Diab said addressing the health teams.

"You are before me, and the priority is for you and for everyone to whom the committee's program applies," he said.

Vaccination campaign starts: Lebanon's first shipment of the Pfizer/BioNTech vaccine landed at the Beirut International Airport early Saturday evening and was received by the caretaker Minister of Health Hamad Hassan.

Vaccines are also administered to staff at the American University of Beirut Medical Center and the Saint George Hospital, which was severely damaged in the August 4 port blast.

Additional evidence suggests that the B.1.1.7 Covid-19 variant, first identified in the UK, is linked to more severe disease, researchers say.

The UK’s New and Emerging Respiratory Viral Threat Advisory Group (NERVTAG) analyzed data from more than 10 existing studies, concluding in a report on Friday that the variant is linked to more hospitalizations and deaths.

The additional evidence bolsters the group’s earlier report, released in January, suggesting the variant may be linked to more severe disease.

The researchers say they now have increased confidence in their findings because the4 new analysis includes a wider range of data, and they were able to control for some outside factors.

How deadly is the variant? The B.1.1.7 variant may be associated with more severe disease -- but the "absolute risk of death per infection remains low,” the researchers said.

But the variants will likely be less forgiving if people let up on masking and social distancing, since a more contagious strain alone could lead to more cases and therefore more deaths.

In January, the CDC said that it was working with UK researchers to review their mortality data related to the virus variant.

The Centers for Disease Control and Prevention said this week that at least 981 cases of the B.1.1.7 variant have been found in 37 states. Over a third of those are in Florida, where it’s estimated that one in 10 coronavirus cases may be due to the variant.

New Zealand is imposing a three-day lockdown in its most populous city beginning Sunday, after three new locally transmitted Covid-19 cases were reported on Saturday.

Prime Minister Jacinda Ardern announced the lockdown for Auckland, home to 1.5 million people, during a news conference on Sunday. The lockdown will end at 11:59 p.m. on Wednesday.

Under the lockdown: All Auckland residents, including students, must stay home except for essential outings. Ardern also asked all businesses to switch to non-contact services, such as takeaway instead of dining in.

The rest of New Zealand will also be raised to Level 2 social distancing measures, where mask-wearing is mandatory on public transport and there is a cap of 100 people on gatherings.

Family tests positive: The three local cases reported are a mother, father and daughter from the same South Auckland household, according to Director-General of Health Dr. Ashley Bloomfield.

There is another close-contact member of the family that is also waiting for their test results.

The high school that the daughter attends, Papatoetoe High School, will be closed Monday and Tuesday following the girl's positive test. A pop-up testing site will be available for students at the school.

New Zealand has been largely successful in containing the virus, and has reported a total of 1,974 Covid-19 cases since the pandemic began.

The United States reported 82,178 new Covid-19 cases and 3,313 related deaths on Saturday, according to a tally by Johns Hopkins University.

At least 69,883,625 vaccine doses have been distributed and at least 50,641,884 doses have been administered, according to the US Centers for Disease Control and Prevention.