California has surpassed New York as the US state with the highest number of Covid-19 deaths since the beginning of the pandemic, according to data from Johns Hopkins University.

The grim designation comes after a catastrophic surge of new infections over the holidays in California led to a record wave of deaths that has lingered into February, even as new Covid-19 cases and hospitalizations have fallen in recent weeks. On Wednesday, state data showed a rolling daily average of nearly 500 deaths.

“This is a heart-wrenching reminder that Covid-19 is a deadly virus, and we mourn alongside every Californian who has suffered the tragic loss of a loved one during this pandemic,” said Dr. Mark Ghaly, California’s Secretary of Health and Human Services.

Though California has the highest number of total deaths, many other states have a higher rate of deaths per capita. New Jersey has the highest rate, followed by New York, which was hit hard early in the pandemic.

California saw a surge in new cases in the fall, soaring from a total of 1 million just before Thanksgiving to more than 3 million by mid-January.

The mounting death toll in California comes despite the state’s accelerated vaccine rollout. “Deaths continue to be devastating,” Gov. Gavin Newsom said Tuesday at the opening of the state’s largest mass vaccination center at Levi’s Stadium in Santa Clara, which will administer up to 15,000 doses each day.

Los Angeles will temporarily close five Covid-19 vaccination sites, including one of the nation’s largest at Dodger Stadium, due to a lack of vaccine doses, Mayor Eric Garcetti said on Wednesday.

“We don’t have enough vaccines,” Garcetti said at a news conference, as he explained that the vaccine doses aren’t arriving soon enough.

“We’re vaccinating people faster than new vials are arriving here in Los Angeles and I’m very concerned,” he said. “Our vaccine supply is uneven, it’s unpredictable, and too often, inequitable.”

The sites will shut on Friday and Saturday, and Garcetti says he hopes to reopen them by Tuesday or Wednesday.

“These closures, unfortunately, are inevitable,” he said, adding that the city will have exhausted its supply of the Moderna vaccine for first dose appointments.

President Joe Biden's pledge to reopen most American schools within his first 100 days in office is in danger of going off the rails as teachers' unions hold firm on their demands for new safety measures amid conflicting messages from the administration and public health leaders.

White House press secretary Jen Psaki was pressed again on Wednesday to give a clear definition of what the administration would consider a successful return, after suggesting 24 hours earlier that "teaching at least one day a week in the majority of schools by day 100" could be the bar.

This time around, Psaki said it was Biden's "objective ... for all schools to reopen, to stay open, to be open five days a week, for kids to be learning," but did not commit to a clear benchmark.

Nearly a year into the unprecedented national experiment in remote learning, millions of children are still at home, with no expected return date. Studies show them falling behind, with low-income or Black and Latino children hurting the worst -- but the science is unclear on how, or when, they can safely return to classes, even as some teachers get vaccinated and schools districts work to fit classrooms for reopening.

There is scant information on the effects of bringing students back together, in close quarters, could have on the communities they reenter after leaving the building. And Though Biden promised to nationalize the response, some of the messaging from the White House has added to the confusion. 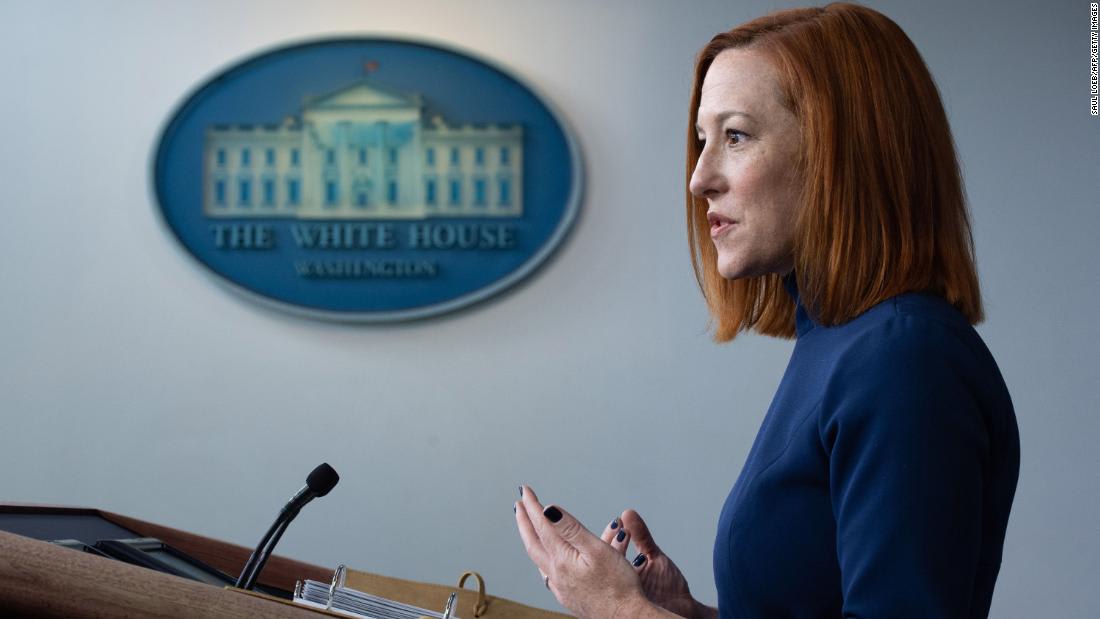 US federal authorities are investigating the distribution of counterfeit 3M N95 masks sold to hospitals and medical facilities nationwide, according to Homeland Security officials.

The sale of fake personal protective equipment, which have also gone to health care providers, has been an ongoing issue during the pandemic amid pent-up demand for supplies -- especially counterfeit N95 masks which are misleadingly labeled as 3M products.

There are active investigations in more than five states, and that number is expected to increase, Francis said. 3M has worked with authorities in multiple states to confirm that the counterfeit masks are not real 3M products.

The Associated Press first reported on the government’s investigation.

The counterfeit products have come into health systems in part through fake solicitations. “These are businesses or individuals that are acting as if they’re medical supplies and acting as if they’re real, legitimate products,” explained Special Agent Brian Weinhaus of Homeland Security Investigations.

“There’s so much demand for these products… they’re going outside of their normal channels to try and find them. When they see something that appears to be legitimate, they’re jumping it.”

Here's how to identify a fake mask: 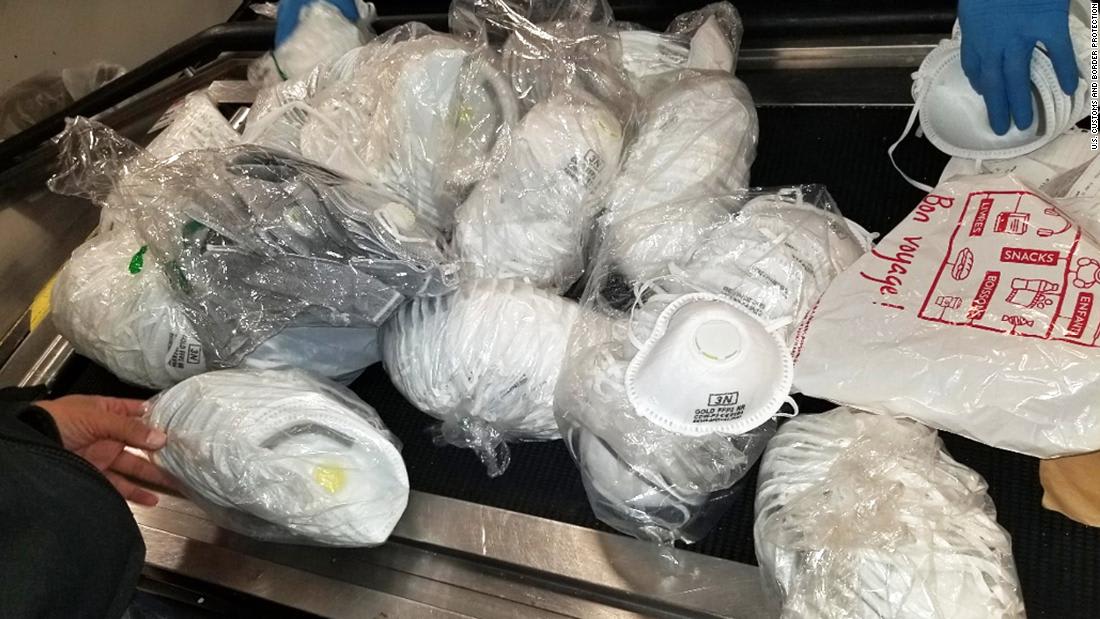 Fake N95 masks have flooded the market. Here's how to tell the difference

The US Centers for Disease Control and Prevention released new guidance on Wednesday offering "best practices" for managing second doses of Covid-19 vaccine and making sure people get their second shots so that they are fully vaccinated.

The Pfizer/BioNTech and Moderna Covid-19 vaccines authorized for emergency use in the United States are administered as two doses, 21 and 28 days apart, respectively.

"If it is not feasible to adhere to the recommended interval, the second dose may be scheduled for administration up to 6 weeks (42 days) after the first dose," according to the new guidance posted to the CDC's website.

The guidance notes that "jurisdictions and providers must carefully manage vaccine inventory to ensure completion of the vaccine series. At present, jurisdictions receive sufficient supply of doses to vaccinate all persons who receive a first dose."

Local health officials were told on Tuesday during a phone call with the White House that the guidance provided recommendations around what to do if patients miss their second-dose appointments, Lori Tremmel Freeman, chief executive officer of the National Association of County and City Health Officials, told CNN on Wednesday.

"This guidance that is coming out is intended to share how health departments -- and others who are distributing the vaccine -- can deal with people who miss their second appointments and how long they should save that vaccine for that patient," Freeman said.

"This guidance is meant to provide some protocols that health departments can use so that they can address missed appointments."

Newfoundland is facing its largest Covid-19 outbreak so far — a chilling discovery for a province that sacrificed large parts of its economy and prohibited most visitors from entering the past 10 months, in the hopes of containing any major outbreaks.

"I believe that going so long with low case counts of Covid led to complacency and we are now seeing the repercussions."

Canada’s easternmost province reported just 53 new Covid-19 cases Wednesday for a population of about a half million people. Still, the province is shell-shocked and has imposed a strict "circuit-breaker" lockdown.

Adding to the 53 new cases are 32 presumptive cases that have yet to be confirmed. The province now has 110 active cases of Covid-19 and that is enough for officials to shutdown parts of the province including widespread closures in the St. John’s metro area, Newfoundland’s capital.

New daily case numbers are expected to rise for days to come as the provincial officials warn residents of a ‘rough period’ ahead.'

New daily case numbers are expected to rise for days to come as the provincial officials warn residents of a ‘rough period’ ahead.

“This is what Covid does, it’s a bit disappointing to see the number of contacts that people have had. I think we really need to do better when it comes to reducing those contacts,” said Dr. Fitzgerald.

All schools in the St. John’s area are now closed for at least 2 weeks, non-essential businesses have been closed to in person shopping and dine-in restaurants must close. In addition, Newfoundland residents have been told to stay home when possible and avoid any private, social gatherings.

Upwards of 1,500 people have been told to self-isolate and officials say they are investigating hundreds of possible contacts.

The outbreak comes at a crucial time for the province, as residents go to the polls to elect a new premier in just a few days. But public health officials say the election will not be postponed and that they will ‘find a way’ to keep everyone safe during the vote.

Two cases of the South African Covid-19 variant have been detected in California, Gov. Gavin Newsom announced Wednesday. Both cases were identified in the Bay Area, one in Santa Clara and the other in Alameda County.

The discovery of the South African strain is in addition to 159 cases of the UK variant and 1203 incidents of the West Coast variants identified thus far in the Golden State.

Thirty labs across the state are working to sequence genomes and potentially uncover additional cases of variants, Newsom said.

The variant of the coronavirus first identified in South Africa could be resistant to vaccines and raise the bar for herd immunity, health officials have said. The first two confirmed cases of the variant in the US were detected last month in South Carolina.

As the rate of new coronavirus cases drops in most of the state, New Mexico’s governor says it will be dropping its mandatory quarantine rule for most out-of-state travelers.

“New Mexicans have sacrificed to make this recent progress, and I encourage all New Mexicans and visitors to our state to maintain vigilance in the coming weeks.”

The current quarantine rules will expire Thursday. They required that people coming to New Mexico from 48 other states isolate for 14 days after arriving.

Only travel from Hawaii was exempted from the rule, since that state has a positivity rate of lower than 80 cases per million residents.

The US Centers for Disease Control and Prevention website now reflects the agency’s new mask data showing double masking can significantly improve protection. The data was published in a CDC report on Wednesday.

The site uses colorful illustrations to outline different types of masks and educates the public on how to “Improve How Your Mask Protects You.”

It describes wearing two masks- a disposable mask underneath a cloth mask for better fit and extra protection. The CDC still encourages the use of a single cloth mask that is multi-layered.

Also suggested on the site: wearing masks with a nose wire and using a mask fitter or brace to prevent air leakage from gaps in loose masks.

The website now instructs to the public to ensure the snug fit of a mask by cupping their hands outside the edges of a mask to make sure no air is flowing out of the sides or top.

The page tells consumers to avoid masks with gaps or exhalation valves or vents.

Beginning in January 2021, the CDC tested two simple methods, double masking and knotting, to evaluate mask performance protection. Researchers found the effectiveness of cloth and medical procedure masks can be improved by ensuring they are well fitted to the contours of the face to prevent air and particles from escaping from gaps around the mask’s edges.

Researchers found that layering a cloth mask over a medical procedural mask, such as a disposable blue surgical mask, can block 92.5% of potentially infectious particles from escaping by creating a tighter fit and eliminating leakage.

Researchers also found that overall performance of medical procedure masks alone can be improved by folding mask edges inward and knotting ear loop strings where they meet mask fabric to reduce gaps. A knotted medical mask can block 63% of aerosols that may contain coronavirus, a significant improvement from blocking only 42% of particles when unknotted. 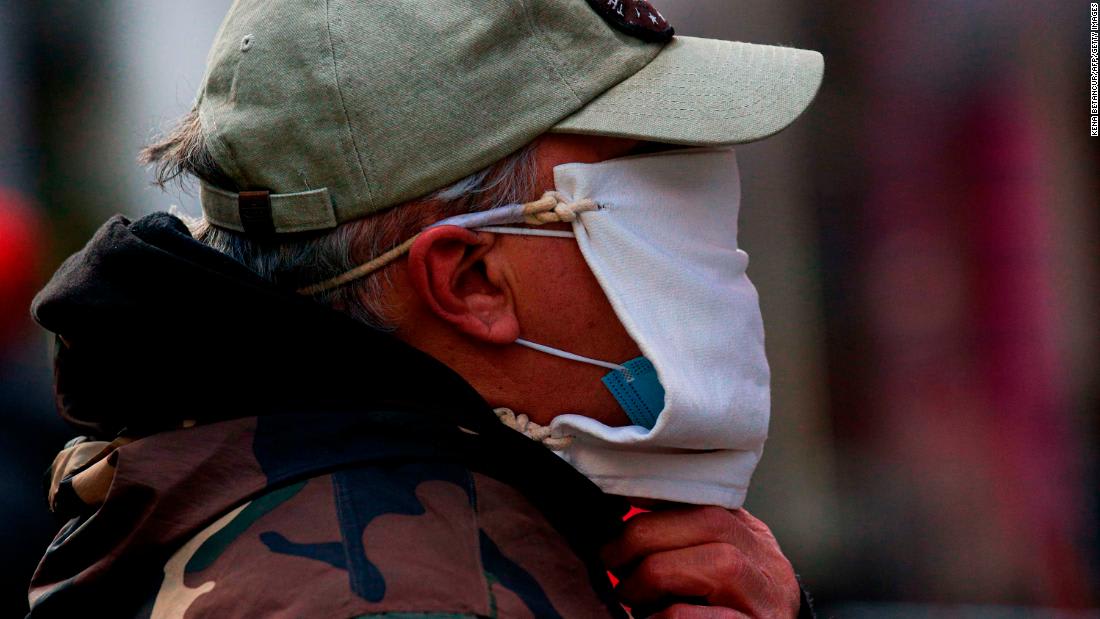