The coronavirus variants circulating globally are projected to become more dominant in the United States by the spring, Dr. Anthony Fauci, director of the National Institute of Allergy and Infectious Diseases, said during a White House news briefing.

"The fact is, when you have a virus that has ability to transmit more efficiently than the wild type in the community — sooner or later, by pure viral dynamics itself — it will become more dominant than the wild type," Fauci said.

"We have a situation where there have now been reported in very specific places, in South Carolina for example, the isolate or the mutant that is the 351 [B.1.351, the Covid-19 variant first spotted in South Africa]," Fauci said. "That seems to have a very good fitness for spread, so whether or not that's going to ultimately take over in the sense of being dominant is unclear by now. The projection that is made with regard to the UK [variant] is that probably by the end of March, the beginning of April, it actually will become more dominant in this country."

Every Covid-19 case in the United States now should be treated as if it is caused by one of the newly identified coronavirus variants, Dr. Rochelle Walensky, director of the US Centers for Disease Control and Prevention, said during a White House news briefing on Friday.

"By the time someone has symptoms, gets a test, has a positive result and we get the sequence, our opportunity for doing real case control and contact tracing is largely gone," Walensky said. "So I think and I believe that we should be treating every case as if it’s a variant during this pandemic right now."

The emergence of coronavirus variants is a "wake-up call," Dr. Anthony Fauci, director of the National Institute of Allergy and Infectious Diseases, said during a White House news briefing on Friday.

"When these variants were first recognized, it became clear that we had to look at, in vitro in the test tube, whether the antibodies that were induced by the vaccines that we had available would actually neutralize these new mutants," Fauci said.

Recent studies from vaccine makers Johnson & Johnson and Novavax have shown some protection against variants.

"What we know now from this study —namely the J&J and the Novavax study — that antigenic variation, i.e. mutations lead to different lineage, do have clinical consequences," Fauci said.

"This is a wake-up call to all of us," Fauci said. "We will continue to see the evolution of mutants. … We have to be nimble in order to adjust readily to make versions of the vaccine that are actually specifically directed to whatever mutation is actually present at any given time."

Dr. Rochelle Walensky, director of the US Centers for Disease Control and Prevention noted that the first two cases of the of the B.1.351 variant, which was officially first detected in South Africa, were identified in South Carolina and announced yesterday – and the cases were identified in different parts of the state and are not believed to be linked.

Walensky added that earlier this week, Minnesota identified the first US case of the P. 1 variant, which recently emerged in Brazil.

Slavitt said the administration is accelerating the process of vaccinating the country “as quickly and as safely as possible,” noting that the seven-day average of 1.2 million vaccines administered per day is “a base to build from in the coming days, weeks, and months.”

The challenges the administration faces, he said, are “increasing the supply of vaccines safely and more rapidly and speeding up the time it takes to administer them efficiently, and more importantly, equitably.”

The US is “rapidly ramping up surveillance and sequencing activities as we work to closely monitor and identify variants as they emerge,” she said during a White House coronavirus briefing.

“We also know viruses mutate, and they tend to mutate in ways that are advantageous to the virus. We expected this. And this is why I feel compelled to underscore for you the need for each of us to remain steadfast in our commitment to taking all of the appropriate steps to protected ourselves and our communities,” she said.

Walensky said that now is not the time to travel, and she encouraged all Americans to wear masks, practice social distancing and get vaccinated when it is available.

More on the variants: At least four coronavirus variants have been identified. Scientists are not surprised to see the coronavirus changing and evolving — it's what viruses do, after all. And with so much unchecked spread across the US and other parts of the world, the virus is getting plenty of opportunity to do just that.

What scientists most fear is that one will mutate to the point that it causes more severe disease, bypasses the ability of tests to detect it or evades the protection provided by vaccination. While some of the new variants appear to have changes that look like they could affect immune response, it's only by a matter of degree.

Pamela Addison’s husband Martin was going to take her to a lighthouse for their sixth anniversary. It was a surprise. But she only found out about it after he had died of Covid-19.

“I felt so alone after Martin died. So I thought I was the only young widow,” she said.

She wrote about her story in her local paper. When Kristina Scorpo read it, she decided to reach out.

Scorpo’s husband Frank died on Easter Sunday. Their baby boy was just six months old. Her older son was not even five.

“When I opened up [Scorpo’s] card, I think one of the first things she said is, ‘you're not alone.’ And at that moment, the weight of feeling alone was like, lifted because now there was someone else who understood,” Addison said.

That’s what gave her the inspiration to start an online group called "Young widows and widowers." Soon, the group became the place to go for Whitney Parker and Diana Ordonez to go.

Ordonez’s husband Juan was taken to the hospital in the middle of the night as he battled Covid-19. He never came home. For their five-year-old daughter Mia, it changed everything.

“She tells me, ‘I’m afraid something is going to happen to you. I'm afraid you're going to die.’ And so she, you know, she just can't go to sleep,” Ordonez said.

“For weeks after he passed, I would wake up suddenly in the middle of the night and I would reach for my phone thinking I missed the call from the hospital. And then you realize, no, you know, he already passed. You have to like tell yourself the story again,” she added.

Parker’s husband Leslie called her from the hospital crying and said he was scared. Two days later, she heard he had died. When she told her daughter, she said:

“She’s so much like her dad. So logical. Like, ‘well, you know, daddy's not here, but I don't think he wants us to be sad all the time.’ And I am like, ‘yeah, that's true. How are you teaching me about grief?’”

The women have never met but even in isolation, group members talk together to grieve their losses and support each other in healing, a reminder that Covid-19 claims lives but also devastates the lives of many loved ones in its wake.

“The commission has adopted a strictly targeted measure that will allow us to gather accurate information about the production of vaccines and where manufacturers intend to ship them,” he said.

“The measure is time limited and specifically applies to those Covid-19 vaccines that were agreed by advance purchase agreements. The measure is intended to run until the end of March,” he added.

“The protection and safety of our citizens is a priority and the challenges we now face left us with now other choice but to act.”

Dombrovskis said during a press briefing that new measures regulating the export of coronavirus vaccines from the bloc are “not targeting any specific country,” stressing that the measure has been introduced to enhance transparency.

Some of the countries the commission has outlined which are to be exempt from export measures include European Free Trade Association members Switzerland, Norway, Iceland and Liechtenstein and six western Balkan nations and any of the 92 low- and middle-income countries in the COVAX recipient list.

The United Kingdom is not on its list of exemptions.

Speaking alongside Dombrovskis, European Health Commissioner Stella Kyriakides said that the EU is not implementing the new measures to protect itself against any specific country, but rather to “ensure access to vaccines for European citizens and, of course, beyond.”

“We are not in competition or in a race against any country,” Kyriakides said.

“The only race we are in is against this virus, and this is what has been at the center of every single piece of work that we have been doing for almost a year,” she added.

This post was updated with new details about the countries that will be exempt from export measures.

US Centers for Disease Control and Prevention Director Dr. Rochelle Walensky said on Friday that she is hopeful that schools can reopen safely by relying on a combination of teacher vaccination and mitigation measures.

“In most states, if not all states, teachers should be eligible for vaccination now,” Walensky said on NBC’s Savannah Guthrie on Today.

Walensky also referenced data released by CDC earlier this week and looked at how K-12 schools in Wisconsin prevented spread of Covid-19.

“We need to have the mitigation efforts that have been, you know, demonstrated to work - masking, distancing, low density classrooms – that has demonstrated that we can open schools safely,” she said.

“Coupled with teacher vaccination, I hope, in the weeks ahead, would suggest that we can open schools safely,” she said.

But, she noted, schools need funding and the resources to make sure that they can get there.

Europe’s medicines regulator on Friday recommended that the European Union's approval of the Oxford-AstraZeneca vaccine.

The European Medicines Agency (EMA) “has recommended granting a conditional marketing authorisation for COVID-19 Vaccine AstraZeneca to prevent coronavirus disease 2019 (COVID-19) in people from 18 years of age,” the EMA said.

The EMA has said they have assessed the data on "data, quality and efficacy" of the vaccine, which will assure EU citizens that the vaccine would meet the required standards and safeguards.

This is the third Covid-19 vaccine that EMA has recommended for authorization.

The long-awaited decision from the EMA came after several EU countries warned they were running out of vaccine doses, and as coronavirus deaths pile up across the continent.

Some background: For the past week, the EU and AstraZeneca have been locked in an acrimonious dispute over vaccine supplies. A week ago, the British-Swedish pharmaceutical giant said it would not be able to deliver as many doses as the European Union expected -- upending the bloc's vaccination plans.

The EMA's authorization came a day after the German vaccine commission said it would not recommend the AstraZeneca vaccine for people aged 65 or over, citing insufficient data. 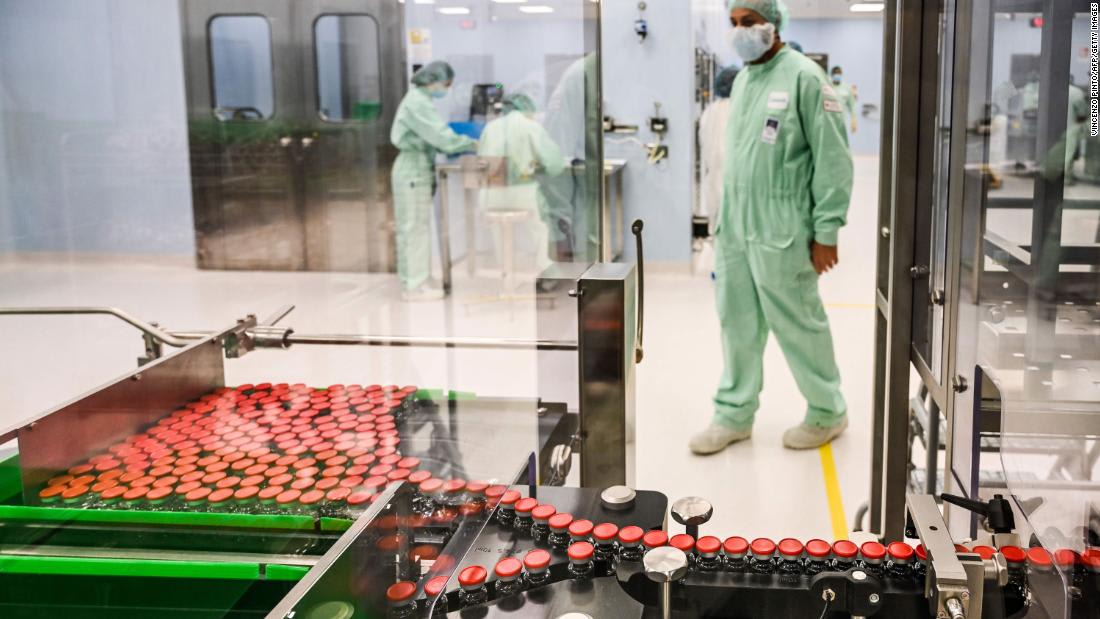