Millions of Americans are at increased risk for more severe Covid-19 because of tobacco use, according to a new report from The American Lung Association.

“Tobacco remains the leading cause of preventable death and disease in America, killing 480,000 people each year,” said the American Lung Association in their State of Tobacco Control 2021 report.

The US Centers for Disease Control and Prevention has said that smoking can cause more severe symptoms of Covid-19.

“With the threat of Covid-19 in addition to the numerous tobacco-caused diseases, it is imperative to prevent youth from starting to use tobacco and to help everyone quit,” said the report.

The association makes the point that, similarly to the coronavirus, smoking also has disproportionate impacts on certain communities, particularly those of color.

Some 50.6 million Americans are currently using tobacco products, the report says, with use of commercial products particularly high among Native Americans and Alaskan Natives -- 29.3% -- and Lesbian, Gay and Bisexual adults -- 29.9%.

Adults with mental illness and substance abuse also have higher rates of smoking, the report says.

The approval was granted under Section 21 Authorisation, which grants emergency use of a health product that is unregistered in South Africa.

Health Minister Zweli Mkhize said that the government expects the first 1 million doses of AstraZeneca’s vaccine to arrive on February 1.

“I am pleased to announce that the flight carrying the first 1 million doses will leave India on Sunday, January 3, 2021, fly via Dubai and land at O.R. Tambo International Airport on Monday, February 1, 2021,” Mkhize told reporters.

Upon arrival in South Africa, the vaccines will undergo a quarantine lasting a minimum of 10 days, in which they will be tested for quality assurance, Mkhize said.

The vaccines will be manufactured by the Serum Institute of India, and 1.5 million doses in total will eventually be flown into South Africa to begin immunizing the country’s 1.25 million healthcare workers.

South Africa has been battling an aggressive second wave of Covid-19 infections caused by a new variant of the virus, known as 501Y.V2, which was first discovered in November. With more than 1.4 million recorded cases and 41,000 fatalities to date, South Africa has recorded more infections and deaths than any other country in Africa.

Dr. Anthony Fauci, director of the National Institute of Allergy and Infectious Diseases, said that the US must focus on minorities in order to efficiently distribute Covid-19 vaccines.

"I think that's the one thing we really got to be careful of, we don't want in the beginning that most of the people who are getting it are otherwise, well, middle class white people," Fauci said during an interview with The New England Journal of Medicine Wednesday.
"You really want to get it to the people who are really the most vulnerable, you want to get it to everybody, but you don't want to have a situation where people who really are in need of it, because of where they are, where they live with their economic status is, that they don't have access to the vaccine," Fauci said.

The bigger picture: Black and Latino Americans are receiving the Covid-19 vaccine at significantly lower rates than White people, a disparity that health advocates blame on the federal government and hospitals not prioritizing equitable access.

A CNN analysis of data from 14 states found vaccine coverage is twice as high among White people on average than it is among Black and Latino people.

Peruvian President Francisco Sagasti announced that his government expects the first 1 million doses of China’s Sinopharm vaccine to arrive in the next few days.

In a televised address Tuesday evening, Sagasti announced the country will start its vaccination plan in February with frontline health workers as the priority group.

The President also announced he will be among one the first people in the country to receive the vaccine.

Peru has taken part in the Sinopharm vaccine’s clinical trials, however the vaccine has yet to be approved by Peruvian regulators.

New restrictions: Peru announced new lockdowns for 10 of its 25 regions, including the capital Lima, as Covid-19 cases rise and hospitals reach a breaking point. The lockdowns will start on January 31.

An aggressive second wave has seen Peru pass 40,000 Covid-19 deaths on Tuesday, according to data released by the country's Health Ministry. Infections are also spiraling -- with about 100,000 new cases recorded in the past month alone -- as officials warn of burned out doctors and overwhelmed intensive care wards.

Read more about the crisis in Peru: 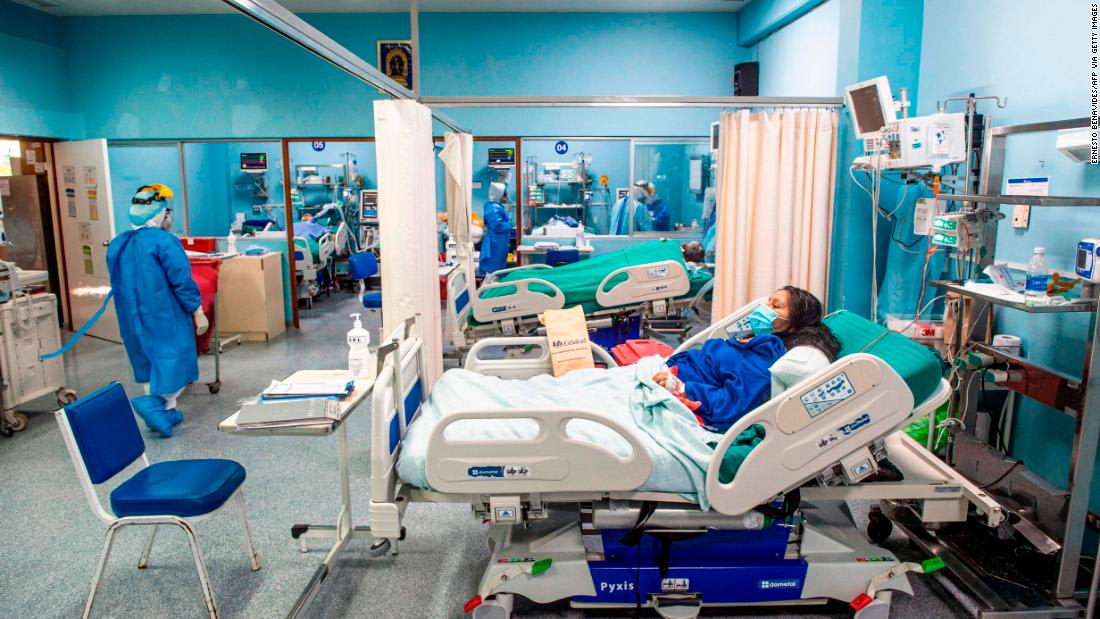 He was speaking at a joint news conference with Prime Minister Boris Johnson, who reiterated the announcement he made earlier in Parliament that schools would not reopen February 22 as planned, but could perhaps reopen starting March 8.

On Wednesday, Johnson also announced that the UK would be introducing government-provided accommodations, for example hotels, for 10 days for those who cannot be refused entry into the UK from high-risk countries.

It comes as the UK surpassed 100,000 coronavirus deaths -- the first country in Europe to do so.

Dr. Marcella Nunez-Smith, the chair of President-elect Biden's Covid-19 equity task force, said there is much work to be done in making sure communities of color around the US accept and receive the Covid-19 vaccine.

"We have to do so much work to disrupt this predictability of disproportionate impact and in this case, disproportionate access to [the] vaccine. If we think specifically about the numbers you just quoted CNN analysis as well as Kaiser Health News and others have found, a similar pattern already emerging across the country," Nunez-Smith said tonight during CNN's coronavirus town hall. "We know part of this has to do with vaccine acceptance. We have to build vaccine confidence. That's part of our work. A lot of this has to do with access."

More context: Black Americans remain among the groups that have the least confidence in the vaccine, according to a study from the Kaiser Family Foundation.

The findings come as the nation's top health leaders urge Black people to trust the vaccine, by hosting live events where Black health professionals are among the first to receive and administer it.

The Kaiser study found that 35% of Black Americans would probably or definitely not get the vaccine if it was determined to be safe by scientists and widely available for free.

A question asked at CNN's town hall tonight was whether there are contingency plans in place for alteration and redistribution of the mRNA vaccines in case one of the current or future coronavirus variants renders them less effective.

Dr. Anthony Fauci, director of the National Institute of Allergy and Infectious Diseases, said that this is something that health experts are working on in collaboration with the pharmaceutical companies.

"One of the beauties of the mRNA approach is that it's highly adaptable," Fauci said.

These vaccines work by using genetic material called messenger RNA, a kind of genetic software that instructs cells to make a piece of the coronavirus spike protein.

"So what you have is this bit of RNA and you stick in the part of the RNA that codes for the protein of the spike that is in the virus that is now circulating in our country," Fauci said.

He added that when you want to adapt the vaccine to protect against new variants, such as the one first identified in South Africa, "you take that same mRNA and instead of sticking in the coding component for the virus that's circulating in our own country, you quickly stick in the one that codes for the South African isolate."

This approach means that you don't have to conduct large-scale trials, he said.

"Bottom line is we're already on it and that's one of the beauties of the mRNA type of platform that it's easily adaptable to what we're talking about."

Whether it's the Pfizer or Moderna Covid-19 vaccine, there is no evidence that shows one is better than the other when administered to a person of color, Dr. Rochelle Walensky, director of the US Centers for Disease Control, said during tonight's CNN coronavirus town hall.

"We don't have any data that suggestions one vaccine we have now is better than another for any subgroups. The subgroup analysis from the trial is just that. We don't have massive numbers. We don't yet know the data from J&J [Johnson & Johnson] so it's hard to compare J&J in the absence of data with Moderna or Pfizer," Walensky said. "What we do know of the Pfizer and Moderna trials is they have had similar effectiveness with ages and races."

The bigger picture: Black and Latino Americans are receiving the Covid-19 vaccine at significantly lower rates than White people, a disparity that health advocates blame on the federal government and hospitals not prioritizing equitablcess.

A CNN analysis of data from 14 states found vaccine coverage is twice as high among White people on average than it is among Black and Latino people.

Answering a question from a teacher during CNN's town hall tonight, Dr. Rochelle Walensky, director of the US Centers for Disease Control, addressed fears of sending kids and staff back to school with few protective measures in place.

Walensky said that while the Biden administration "has very much said and emphasized the importance of getting our children back to school," there needs to be resources in place to do so safely, especially in Covid hotspots.

"We need to make sure that we have proper ventilation, proper masking and mitigation procedures so that we can safely get our kids back to school," she said.

Walensky said that there is a federal plan to get children back into schools but more resources are needed.

"The federal plan is linked to having resources for the school which is why we so badly need the American rescue plan to be funded so we have resources for mitigation for ventilation and PPE, and importantly, for testing," she said.

"A really key part of getting our children back to school is to do testing amongst teachers and among children and the funding for that testing is all on this American rescue plan."

Walensky also raised concerns of the other impacts on kids who are not in school.