British Prime Minister Boris Johnson said the UK government was introducing government-provided accommodations, for example hotels, for 10 days for those who cannot be refused entry into the UK from high-risk countries.

“It is illegal to leave home to travel abroad for leisure purposes. And we will enforce this at ports and airports by asking people why they are leaving and instructing them to return home. If they do not have a valid reason to travel. We have also banned all travels from 22 countries where there is a risk of known variants, including South Africa, Portugal, and South American nations,” Johnson said.

“And in order to reduce the risk posed by UK nationals and residents returning home from these countries. I can announce that we will require all such arrivals who cannot be refused entry to isolate in government provided accommodation, such as hotels for 10 days without exception, they will be met at the airport and transported directly into quarantine. The department for health and social care is working to establish these facilities as quickly as possible. And by right one roof in the Home Secretary will set out the details of our plans in her statement shortly.”

The number of people flying on commercial airlines just hit a six-month low, with fewer than half a million passengers screened at US airports Tuesday.

Dr. Paul Offit says he doesn’t think the US needs "to wait for vaccination” to get public schools back open.

“I think we have to be able to provide a mechanism whereby we can get those kids back into a public school setting where it can be done safely. It may require more money for those schools, but I definitely think we need to do it,” Offit, director of the Vaccine Education Center at the Children’s Hospital of Philadelphia, said on CNN’s “New Day.”

Experts from the US Centers for Disease Control and Prevention say that with the right mitigation measures, there is a path to low-risk, in-person learning. In a paper published Tuesday, researchers noted that the kind of spread seen in crowded offices and long-term care facilities has not been reported in schools.

Offit, a member of the FDA Vaccine Advisory Committee, outlined strategies that school can implement.

“You try to have smaller classroom sizes, so-called pods. It's the teachers who move from one class to the other, not the students, so that you don't have these crowded hallways. You try to separate the desks as much as possible, you don't eat in a cafeteria … so you're not all sitting together with your masks off. There are a number of strategies that can be done,” he said.

Offit added that he doesn’t think the Covid-19 variants play a role in reopening schools.

Beijing's municipal government has announced new measures for anyone entering the Chinese capital, aimed at curbing the spread of the virus during the Chinese Lunar New Year, otherwise known as the Spring Festival.

On Wednesday, spokesperson Xu Heijan said that from Thursday until March 15, anyone coming to Beijing from "low-risk areas in China" must show negative Covid-19 test results within seven days of arriving. The festival is celebrated in mid February.

On arrival, visitors must undergo 14 days of "health monitoring" and get tested on the seventh and fourteenth days of their stay.

"Those who don’t plan on staying for more than 14 days in Beijing need to fulfill the health monitoring and nucleic test requirements based on the actual number of days they are in Beijing," Xu added.

During the "health monitoring" period, people can work and travel but cannot participate in group activities or gatherings.

The new restrictions will be implemented "in order to minimize the risk of the spread of the virus caused by massive migration of people around the Spring Festival and to ensure that the citizens enjoy a happy and peaceful holiday," Xu said.

Some background: According to data from John Hopkins University, the total number of coronavirus cases in China currently stands at 99,605 since the start of the pandemic, with 4,811 deaths.

Two hospitals in the German state of Bavaria have started self-quarantining on Wednesday after preliminary tests showed 11 people connected to the facilities were potentially carrying the UK coronavirus variant B1.1.7.

The two hospitals -- the Klinikum Bayreuth and Krankenhaus Hohe Warte -- located in the town of Bayreuth, east of Frankfurt, have stopped admitting new patients except those in a very serious condition.

Frank Schmälzle, head of press and public relations at the Klinikum Bayreuth, told CNN that a total of 3,300 staff from both hospitals are only allowed to commute between the facilities and their homes during the quarantine period.

Schmälzle said a total of 560 patients were being treated across both hospitals.

Professor Juergen Duner, chief medical officer at the laboratory Becker & Kollegen, meanwhile told CNN that there was a rise in the new coronavirus mutations B1.1.7 and B1.351 in the area of Munich, the Bavarian state capital.

“In less than three weeks, the proportion of variants in infections has risen sharply from 0.2 percent to 7 percent," Duner said.
"That in itself is a clear sign that the new variants are currently spreading very quickly.”

The move to self-quarantine the two hospitals comes just days after the Vivantes Humboldt-Klinikum hospital in Berlin was placed under quarantine following an outbreak among both patients and staff of the coronavirus variant first detected in the UK.

On Tuesday, 24 cases of the UK variant were detected at the hospital -- in 13 patients and 11 members of staff, the hospital confirmed.

In a different Berlin hospital, the Klinikum Spandau, two additional cases have been identified in patients.

World Health Organization (WHO) Director-General Tedros Adhanom Ghebreyesus has accused wealthy countries of trying to jump the queue in the distribution of vaccines -- and described equitable distribution around the world as both a moral imperative and essential for ending the pandemic.

Tedros told a session of the parliamentary assembly of the Council of Europe on Wednesday that "the promise of equitable access is at serious risk."

"A me-first approach leaves the world's poorest and most vulnerable at risk," he said, and was also self-defeating. "Many countries have bought more vaccine than they need."
"We now face the real danger that even as vaccines bring hope to those in wealthy countries, much of the world could be left behind," Tedros added.

He said some companies and countries were making bilateral deals in an attempt to jump to the front of the queue. This was driving up prices and meant they were "going round" the COVAX mechanism, a WHO program which purchases vaccines in bulk for distribution to poorer countries.

75% of the doses distributed had been deployed in just ten countries, Tedros said, and it was not right that younger, healthy adults in rich countries could get the vaccine before health workers and older people in poorer countries.

The emergence of new variants of Covid-19 has made the speedy and equitable roll-out of vaccines even more important, he added.

Some background: Tedros said WHO's COVAX program had secured contracts for two billion doses from five producers this year and has options for a further one billion doses into next year. The first deliveries of doses bought through the program should be made next month, he said.

However, Tedros continued, the WHO still needed funds to complete the purchases contracted for this year. COVAX needs access to those doses soon, not the "leftovers in many months from now," he said.

One year ago today, the first person was diagnosed with coronavirus in Germany at a Bavarian company, as German Health Minister Jens Spahn warned the country was at the "beginning of a coronavirus epidemic."

Spahn provided assurance that Germany was well equipped to tackle the virus with large amounts of hospital space and warned against unnecessary panic saying "not every cough is a case of coronavirus."

Germans were warned by Chancellor Angela Merkel that the country would enter into its first national lockdown on March 22 while cases and deaths were still low. She added that Germany should expect restrictions like they have "never seen them before."

As people were urged to stay at home, the data showed cases and mortality rates slowing down, leading Merkel to say in May, the first phase of the pandemic was behind them.

We're at a point where we can say we've achieved the goal of slowing the spread and keeping the health care system from being overwhelmed," Merkel said.

But as Germany started to open up and travel restrictions were lifted, a second wave of coronavirus quickly grew, leading Merkel to warn that another -- lighter -- lockdown was to come. Experiencing lockdown fatigue, social distancing became less of a priority and the country battled higher infections and death rates.

On Wednesday, Bavarian Prime Minister Markus Soeder marked the grim anniversary, telling CNN’s German affiliate they could now identify and isolate the patients effectively. He warned though that the virus was still spreading “at great speed.”

French pharmaceutical giant Sanofi has entered an agreement with BioNTech to help produce more than 125 million doses of the German biotech company's coronavirus vaccine for the European Union, according to a statement released on Wednesday.

The statement said production of the shots would begin later this year in the summer period at the Sanofi plant in Frankfurt.

"We are very conscious that the earlier vaccine doses are available, the more lives can potentially be saved," Sanofi CEO Paul Hudson said in the statement.
"Although vaccination campaigns have started around the world, the ability to get shots into arms is being limited by lower than expected supplies and delayed approval timelines owing to production shortages.
"We have made the decision to support BioNTech and Pfizer in manufacturing their COVID-19 vaccine in order to help address global needs, given that we have the technology and facilities to do so. As always, our top priority is to focus our efforts and capabilities on fighting this global pandemic. First and foremost, we will do this by continuing to develop our own COVID-19 vaccines candidates, in parallel with this industrial cooperation."

Sanofi scientists are also developing two vaccine candidates to help prevent and control Covid-19. One, with Britain's GlaxoSmithKline, has been delayed until later this year after it showed an insufficient immune response in the elderly, but according to Sanofi phase two trials with an improved formulation are set to start in February.

Another vaccine the company are working on is with the U.S. firm Translate Bio which uses mRNA technology, similar to Pfizer/BioNTech. Phase one trials are expected to start this quarter.

Read more about criticism of the vaccine delays here

January has already become the worst month for US Covid-19 deaths since the start of the pandemic.

As of Tuesday, there have been more than 79,000 coronavirus fatalities this month, topping the previous record set in December by more than a thousand, according to data from Johns Hopkins University.

The grim milestone underpins the growing demand from state officials for more vaccines so that Americans can be inoculated more quickly.

President Joe Biden has pushed for 100 million vaccination shots in the first 100 days of his presidency, but with a long road ahead for vaccinations, he also called for 100 days of mask-wearing.

"The brutal truth is it's going to take months before we can get the majority of Americans vaccinated. Months. In the next few months, masks, not vaccines, are the best defense against Covid-19," Biden said while announcing the federal government would buy and distribute more vaccine doses from Moderna and Pfizer.

With those additional doses, Biden said there would be enough to fully vaccinate 300 million Americans -- nearly the entire US population -- by the end of summer or early fall. 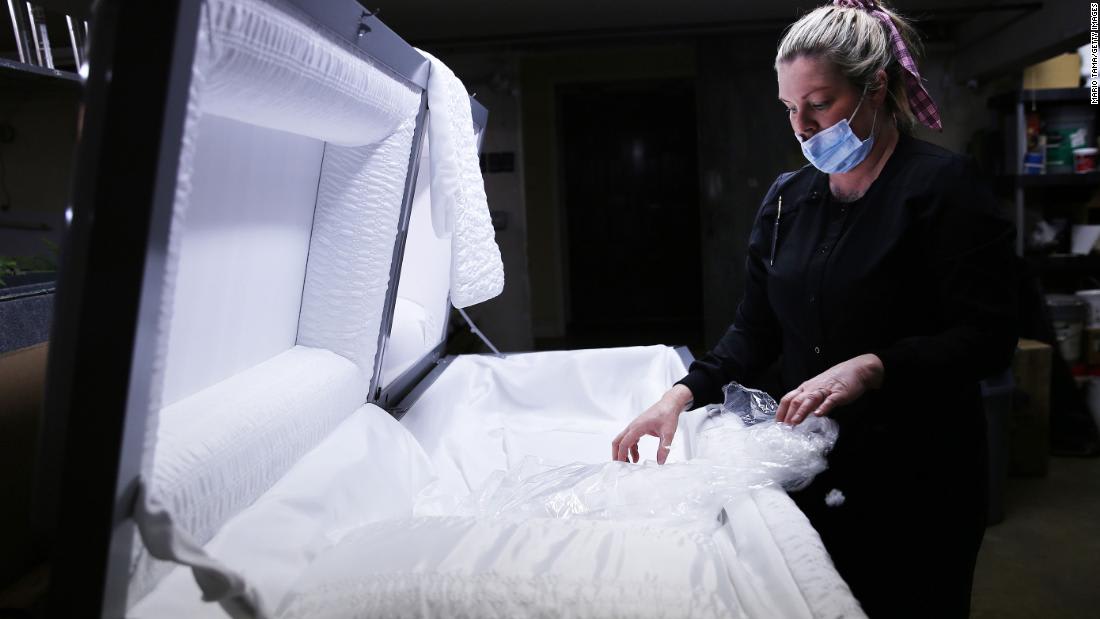