The United States on Tuesday reported a record-high number of 4,327 new Covid-19 deaths, according to data from Johns Hopkins University.

The latest figures bring the nationwide death toll to 380,670.

Vaccines: At least 27,696,150 vaccine doses have been distributed and at least 9,327,138 shots administered, according to the US Centers for Disease Control and Prevention.

Indian officials are ramping up their messaging that two Covid-19 vaccines approved for emergency use are safe, in order to encourage participation in the country's vaccine rollout.

Speaking a news conference on Tuesday, Dr. V. K. Paul, Member (Health) of government think tank NITI Aayog, said vaccines Covishield and Covaxin “have been tested on thousands of people and the side-effects are negligible.”

Paul urged the media to raise awareness, saying, “We believe it is very much in our grasp to mount the world's largest vaccination program, which is set to begin from January 16."

Rajesh Bhushan, a senior official from the country’s Ministry of Health and Family Welfare, added that the vaccines were granted approval through a "well prescribed regulatory process.”

Vaccine drive: India is embarking on one of the world's most ambitious mass immunization programs ever undertaken. The country of 1.35 billion is planning to inoculate 300 million frontline workers, elderly and vulnerable people by August, and preparations have been months in the making. In its first phase, the government intends to vaccinate 10 million healthcare workers free of charge.

Since the start of the pandemic, scientists have mused that the novel coronavirus might eventually go the way of other coronaviruses that affect people, and join the mix of viruses that cause the common cold.

A study published Tuesday takes a look at how that might happen – and how mass vaccination might affect that natural cycle.

“This transition may take anywhere from a few years to a few decades depending on how fast the pathogen spreads,” Jennie Lavine, a researcher at Emory University, and colleagues reported in the journal Science.

The current pandemic is likely as deadly as it is because it’s a new virus affecting people who have no immunity to it. It’s worse in older adults because their bodies aren’t used to fighting off new viruses in the same way children’s bodies are, the researchers said.

But it’s similar to four other coronaviruses that cause symptoms no worse than the common cold in most people. Once it has been circulating for a while, the current coronavirus may do the same, they said.

Studies of the body’s immune response indicate that immunity that can completely block infection “wanes rapidly,” they wrote. But people would have residual immunity that protects against severe disease. If the virus starts to circulate freely everywhere, it would become endemic, or permanently entrenched in the population.

“Once the endemic phase is reached and primary exposure is in childhood, CoV-2 may be no more virulent than the common cold,” Lavine and colleagues hypothesized.

Colombian Defense Minister Carlos Holmes Trujillo has tested positive for Covid-19, according to a statement from the Ministry of Defense Tuesday.

The minister is quarantined and in “good health,” the statement said, adding that Trujillo will continue with his duties virtually.

As of Tuesday, Colombia has reported 1,816,082 cases of Covid-19 and 46,782 virus-related deaths, according to Johns Hopkins University.

Facing a surge in Covid-19 cases, Cuban officials Tuesday night said they are implementing new restrictions, including shutting schools in much of the capital Havana and other parts of the island.

Schools will be shut in 34 municipalities hard hit by the pandemic starting on Thursday, officials said.

Cuba has recorded more than 15,000 coronavirus cases, including 155 deaths, according to Johns Hopkins University.

For much of the pandemic Cuba had managed the outbreak more effectively than many other countries in the region but since reopening borders in late 2019, the communist-run island has seen a sharp increase in infections.

Officials said Tuesday more restrictions would be put into place soon on transportation and commerce.

China recorded its highest daily increase in Covid-19 cases in more than five months on Tuesday, following a recent cluster of infections in the northern Hebei province.

The National Health Commission said in a statement that the country reported 115 new confirmed cases Tuesday, which is the highest daily rise since July 30.

Hebei's vice governor Xu Jianpei announced Tuesday that a second round of mass testing programs would kick off in the cities of Shijiazhuang, Xingtai, and Langfang. The first saw 17 million people tested in the province in a program that ended on Sunday.

The number of new asymptomatic cases, which China does not classify as confirmed cases, was 38.

China has recorded a total of 87,706 confirmed cases during the pandemic and at least 4,634 people have died.

A Covid-19 vaccine developed by China’s Sinovac Biotech was just 50.38% effective in late-stage trials in Brazil, significantly lower than earlier results showed, according to a statement published by the government of São Paulo Tuesday.

While the number meets the threshold required by global regulators for approval, it falls far below the 78% figure announced last week.

It's raising questions as to the veracity of the data and fueling skepticism over the apparent lack of transparency regarding Chinese vaccines.

“The Butantan Institute and the Government of São Paulo report that the coronavirus vaccine achieved a 50.38% overall efficacy rate in the clinical study conducted in Brazil, in addition to [an efficacy rate of] 78% for mild cases and 100% for moderate and severe cases of Covid-19. All rates are higher than the 50% level required by the WHO (World Health Organization),” the statement released Tuesday said.

The razor-thin results for regulatory approval are likely to lead to concern among scientists, given that last week the Brazilian Institute released partial “clinical efficacy” results celebrating 78% to 100% efficacy in preventing infections. The vaccine was studied in 12,500 volunteers, all of them health professionals, across Brazil.

Why the data changed: In a summary of the clinical study published by the government of São Paulo and the Butantan Institute, data for another group of participants who reported “very mild” cases of infection was included, therefore yielding a lower efficacy rate for the vaccine.

"Regarding the overall efficacy of the analysis, we met the requirements of the World Health Organization with 50.38%," Ricardo Palacios, medical director for clinical research at the Butantan biomedical center in Sao Paulo said Tuesday during a news conference.

Questions over efficacy: However on Tuesday, high-ranking members of the Brazilian Health Ministry told CNN affiliate CNN Brasil that "the effectiveness is borderline," and that because "it is at the limit" they would need the county’s health regulator agency, ANVISA, to evaluate.

A representative of Sinovac said the company is discussing the result but declined to give further comment.

Last week, ANVISA told the Butantan Institute that in order to approve the emergency use of a vaccine, the global efficacy rate had to be disclosed to the public -- information the institute did not receive from Sinovac at the time, according to CNN Brasil sources.

Scientists have identified an "escape mutant" that may decrease the efficacy of Covid-19 vaccines.

The mutation -- called E484K -- has been found in a variant of the coronavirus first spotted in South Africa two months ago. That variant has now spread to 12 other countries.

"We fear this mutation might have an impact, and what we don't know is the extent of the impact," she said.

E484K is called an "escape mutant" because it's been shown it might be able to escape some of the antibodies produced by the vaccine.

Sigal, Moore, and other scientists who are studying the E484K mutation still have to complete their work in the lab to see if the vaccine is less effective against this new variant.

Based on what they've seen so far, they say they highly doubt E484K will render the coronavirus vaccines useless. Rather, they think there's a possibility the mutation -- on its own or in combination with other mutations -- could decrease the efficacy of the vaccine against the variant.

They also worry E484K might be an indication the novel coronavirus is showing its ability to change before our eyes. If this mutation happened in a matter of months, other problematic mutations could follow.

"This virus may be taking the first steps down a fairly lengthy road towards vaccine resistance," said Andrew Ward, a structural virologist at Scripps Research in La Jolla, California.
"It's the beginning of a long haul," Moore said. "That's what's really shaken me up about this. It's a sobering wake up call." 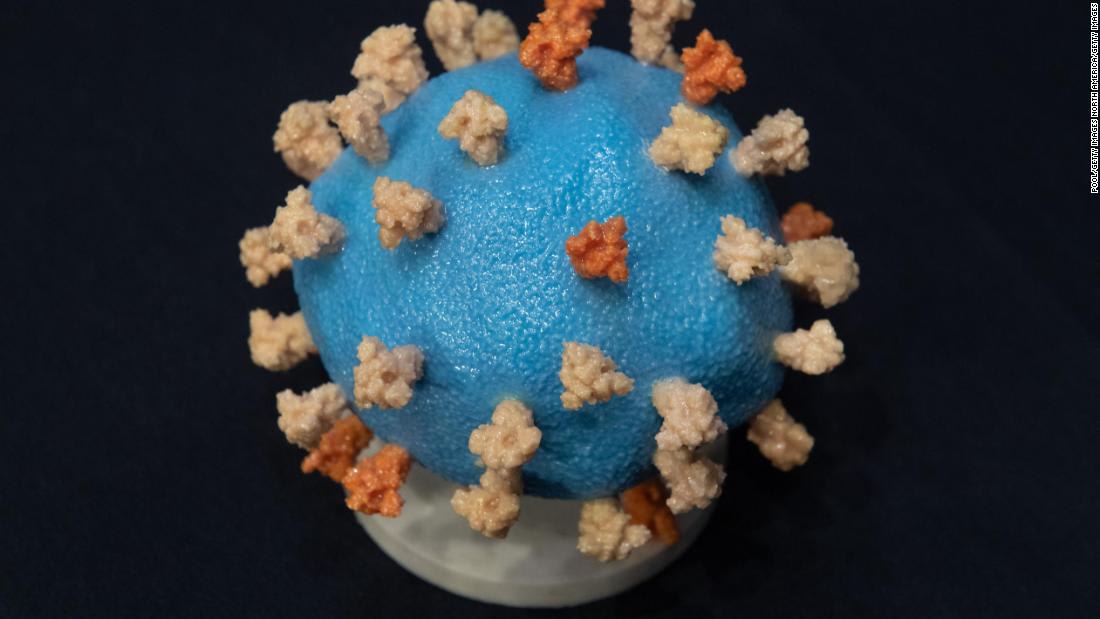 The US Centers for Disease Control and Prevention said Tuesday it will require a negative Covid-19 test from all air passengers entering the United States -- a move it says may help slow the spread of the coronavirus.

Air passengers will be required to get a viral test within three days before their flight to the US departs, and to provide written documentation of their lab results, or documentation of having recovered from Covid-19, the agency said in a statement to CNN.

CDC Director Dr. Robert Redfield is expected to sign the order on Tuesday and it will go into effect on January 26.

"Variants of the SARS-CoV-2 virus continue to emerge in countries around the world, and there is evidence of increased transmissibility of some of these variants," the CDC said in a statement. "With the US already in surge status, the testing requirement for air passengers will help slow the spread of the virus as we work to vaccinate the American public."

If a passenger does not provide documentation of a negative test or recovery, or chooses not to take a test, the airline must not allow the passenger to board, the CDC said. 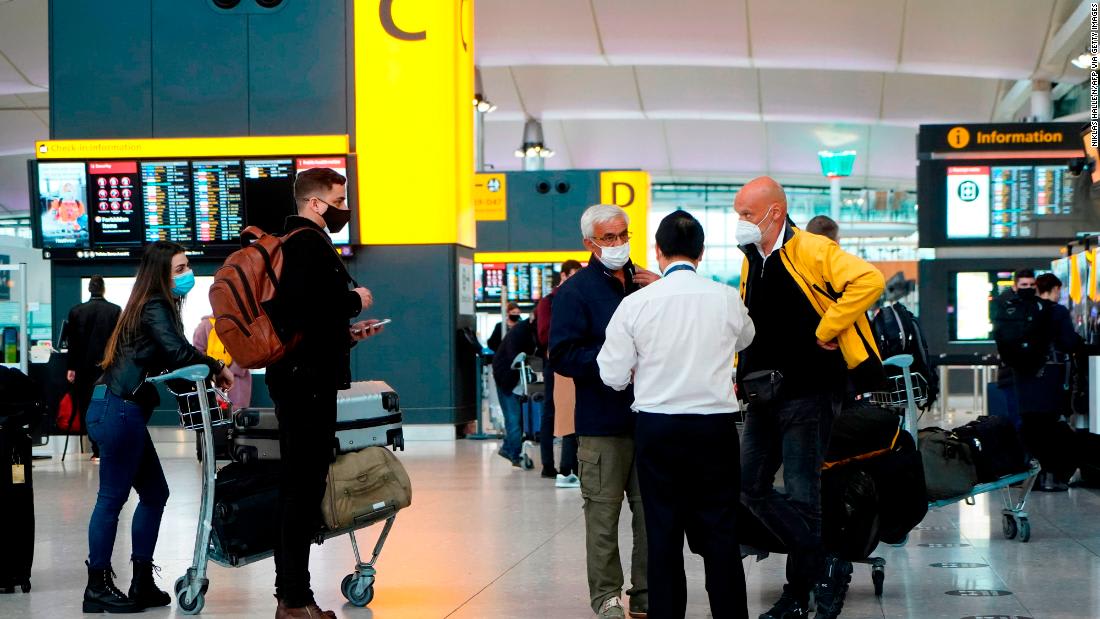