The World Health Organization (WHO) has warned that social distancing measures will need to stay in place "for the rest of this year," even as vaccination rollouts get under way globally, because it takes time to build up herd immunity.

WHO’s Chief Scientist Dr. Soumya Swaminathan said herd immunity -- a situation where the majority of a population becomes immune to the virus either because they have become infected and recovered, or through vaccination -- won't be achieved this year.

Speaking at a briefing on Monday, Swaminathan said:

Because even as vaccines start protecting the most vulnerable, we are not going to achieve any level of population immunity, or herd immunity in 2021 and even if it happens in a couple of pockets in a few countries, it's not going to protect people across the world."

Swaminathan added that until herd immunity is achieved, public health measures such as masks and social distancing will need to remain in place.

"The vaccines are going to come. They are going to go to all countries, but meanwhile we mustn't forget that there are measures that work and... it’s really important to remind people, both governments as well as individuals, on the responsibilities and the measures that we continue to need to practice... for the next... well for the rest of this year at least," she said.

Health officials had warned the Covid-19 pandemic would make winter one of the most difficult times in US history. That prediction is quickly proving true.

December was devastating. And January could be deadlier.

For the past week, the US averaged more than 3,000 Covid-19 deaths per day. And Monday marked the seventh day in a row the country reported more than 200,000 new Covid-19 infections.

The grim numbers have been fueled by last month's holiday travels and gatherings that experts had warned against.

"This is what we were afraid of -- people letting their guard down over Christmas and New Years," New Jersey Gov. Phil Murphy said Monday while announcing the spread of the virus was increasing across the state.

Arizona: Hospitalization numbers are at all-time highs due to a surge that the state's top health official said earlier this month followed the Christmas holiday.

California: In Los Angeles, which has been battered by the virus for weeks now, one health official says the aftermath of holiday get-togethers is likely still on its way, and ICUs are already full.

"It takes two to three weeks for patients to get sick enough to need the hospital after they've gotten the virus, and Christmas was only two weeks ago, and we're already full," said Dr. Anish Mahajan, chief medical officer at the Harbor-UCLA Medical Center.
"We don't have any more ICU capacity," he added. "All of the hospitals in the region are putting ICU patients in unusual places in the hospital just to find room for them."

Read more about the crisis in the US: 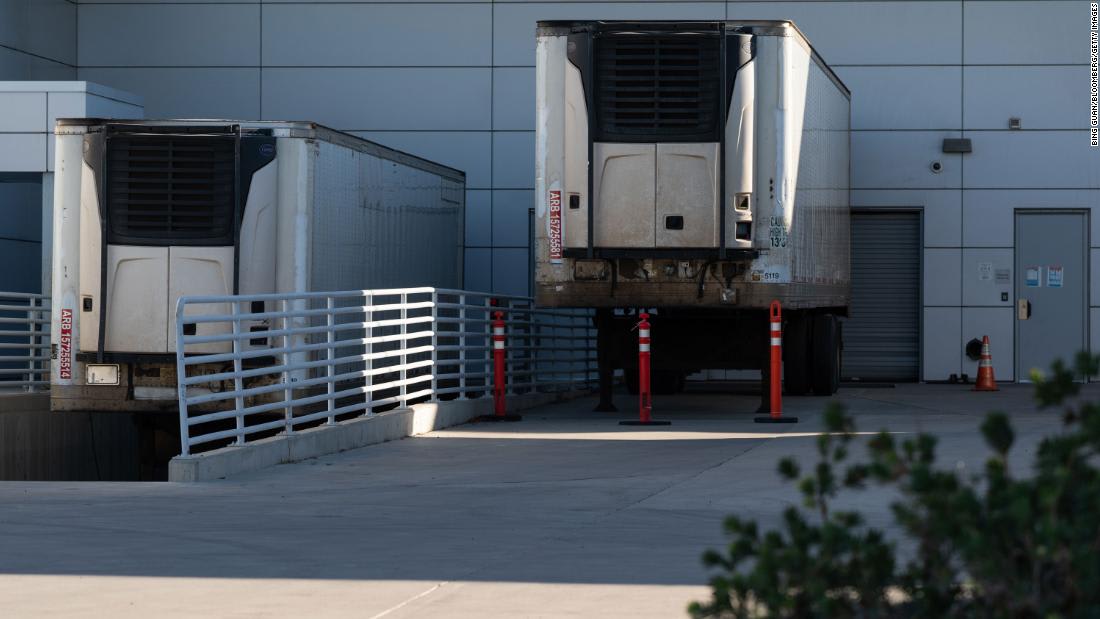 The US has averaged more than 3,000 Covid-19 deaths a day over the past week

The head of the Tokyo 2020 Organizing Committee said officials will move forward with preparations for the delayed Olympic Games amid the Covid-19 state of emergency in the Japanese capital and other prefectures.

The Games are scheduled to start on July 23 following a postponement last year due to the pandemic.

Yoshiro Mori, head of the committee, delivered a video address Tuesday to 3,500 Olympic Games staff members, assuring the committee would go ahead with their plans.

“I think everything would be affected if I scratch my head or show any indecisiveness. We will proceed with the preparations as planned,” Mori said.
“We will emerge from this dark tunnel in cooperation with you. I would like you all to do the best until the end to bring many people joy and hope in the belief that spring comes after winter and morning always comes after a long night.”

New cases: Japan reported 4,864 new Covid-19 infections on Monday, bringing the nationwide total to 292,924, according to the country's Health Ministry. Tokyo, which accounts for more than a quarter of Japan's total cases, added 970 new infections on Tuesday.

The European Medicines Agency has received an application for conditional marketing authorization for the Covid-19 vaccine developed by AstraZeneca and Oxford University, it said in a statement Tuesday.

The EMA said it will proceed with the assessment "under an accelerated timeline" and an opinion on whether to issue an authorization could be made by January 29.

Conditional marketing authorization (CMA) is the process used to fast-track the authorization procedure and speed up approval of treatments and vaccines during public health emergencies.

"If the EMA concludes that the benefits of the vaccine outweigh its risks in protecting against Covid‑19, it will recommend granting a conditional marketing authorization. The European Commission will then fast-track its decision-making process with a view to granting a conditional marketing authorization valid in all EU and EEA Member States within days," the EMA said in a statement.

A decision could be made, "provided that the data submitted on the quality, safety and efficacy of the vaccine are sufficiently robust and complete and that any additional information required to complete the assessment is promptly submitted," the EMA said.

Russia has extended a ban on flights to and from the UK until February 1, the country's coronavirus task force said, according to state-run news agency TASS.

"The anti-coronavirus crisis center has decided to keep flights to and from the United Kingdom suspended. In order to protect public health, the suspension has been extended until 11:59 p.m. on February 1, 2021," the statement said.

Russia suspended UK flights on December 22 after the country announced a new, more contagious coronavirus variant that was linked to a surge in cases in England had been identified.

Ireland recorded the highest Covid-19 infection rate in the world last week, according to statistics from Our World in Data, an online scientific publication based at the University of Oxford.

In the seven days leading up to January 10, Ireland reported 1,322.92 Covid-19 cases per 1 million people, the statistics showed, placing it above any other country over the same period.

Ireland has been facing a worsening Covid-19 outbreak: Last Friday, it reported the highest daily increase in coronavirus infections since the beginning of the pandemic, with 8,248 new cases, according to a statement from the country's Health Department.

The country has further tightened its lockdown measures since last week -- including closing non-essential construction sites, schools, and childcare services.

Ireland has reported a total of 152,539 Covid-19 cases and 2,352 deaths, according to a Johns Hopkins University tally.

The latest figures bring the nationwide total to at least 22,613,782 coronavirus cases, including 376,060 fatalities.

Vaccines: At least 25,480,725 vaccine doses have been distributed, with at least 8,987,322 shots administered, according to the US Centers for Disease Control and Prevention.

US Rep. Pramila Jayapal tested positive for Covid-19 Monday night, according to a news release from her office.

It comes after the Democrat Congresswoman from Washington was among those locked down at the US Capitol when it was stormed on Wednesday.

The statement from her office said Jayapal tested positive after being “locked down for hours” with “several Republicans [who] not only cruelly refused to wear a mask but mocked colleagues and staff who offered them one,” the release went on to say.

Jayapal began quarantining immediately after the riot, according to the release.

While in isolation, Jayapal continues to work because “the deep urgency of our many crises is paramount,” she said in the release.

El Salvador has imposed a fine on Spirit Airlines for boarding a passenger with a positive Covid-19 PCR test result, the country’s director-general for the Office of Migration and Foreign Affairs, Ricardo Cucalon, said on Monday.

The flight was from Houston to San Salvador on Thursday.

Spirit has been fined approximately $6,000, Cucalon said, speaking to local media on Monday.

“I call on the airline to solve the issue. A fine of $6,000 doesn’t solve it. The issue is the risk to which countless people were exposed to,” Cucalon said.

Some 58 passengers who traveled on the same flight have been notified as well as the country’s Health Ministry -- as it is up to them to determine the best way to contain the potential spread of the virus.

What happened: On Thursday, a Honduran citizen was allowed to board a flight from Houston, Texas to San Salvador, El Salvador’s capital, where migration officials discovered the passenger was allowed to travel with a positive PCR test result for Covid-19.

Spirit Airlines told CNN on Saturday that it is investigating how the passenger was able to board the plane "despite going through the checks" and that it will take the appropriate measures. The airline affirmed that they have protocols in place to meet the requirements demanded by each country to which they travel.

El Salvador requires all passengers traveling to the country to provide a negative PCR test conducted within 72 hours before traveling.

The country resumed international flights in September after closing them for six months due to the coronavirus pandemic.