Wisconsin Gov. Tony Evers has extended the state's stay-at-home order to May 26, according to a statement from his office.

The extension also loosens some restrictions on businesses.

Golf courses will be allowed to reopen and public libraries and arts and crafts stores may offer curb-side pickup, the announcement said.

However, the statement also notes that public and private K-12 schools will remain closed for the remainder of the school year.

"The order implements some new measures to ensure safety and support the progress we've made in containing COVID-19, but also allows certain activities to start up again," the statement said.

The order also directs essential businesses to ramp up disinfection and urges retail stores to limit the number of people allowed to enter.

The governors of Michigan, Ohio, Wisconsin, Minnesota, Illinois, Indiana, and Kentucky have announced that they will work in close coordination to reopen the Midwest region economy in the wake of the pandemic, according to a statement from Michigan Gov. Gretchen Whitmer on behalf of all the participating governors.

"We recognize that our economies are all reliant on each other, and we must work together to safely reopen them so hardworking people can get back to work and businesses can get back on their feet," the governors said in a joint statement.

The governors said they will focus on least four factors when determining when best to reopen the economy:

“Our number one priority when analyzing when best to reopen our economy is the health and safety of our citizens,” the governors said in a joint statement.

The governors went on to say that they would make decisions "based on facts, science, and recommendations from experts in health care, business, labor, and education."

Similar collaborations have been taken by governors in recent days on the West and East coasts.

A federal health official tells CNN that teams from the US Centers for Disease Control and Prevention are being sent to the eight states – New Mexico, Wyoming, Idaho, Alaska, North Dakota, Kentucky, West Virginia and Ohio — to bolster contact tracing efforts in order to help contain Covid-19.

Contact tracing is widely considered to be necessary to have in place in order to reopen the economy.

The health official said the teams will be “testing new technologies,” including “having people do self-swabbing and evaluating how effective that is. They are also looking at some mobile technology to look at contact tracing.”

Some states will have specialized epidemiology studies performed in nursing facilities. CNN previously reported these teams were also being sent to help homeless and prison populations in some states.

The goal of the CDC teams will be to expand testing “and try and help those states remain at low levels of transmission,” the official previously told CNN.

The agency has not officially announced the new “Community Protection Initiative” program.

Among the eight states, Wyoming announced Tuesday the CDC would be sending it approximately five people as part of the program. And New Mexico said Wednesday it had been approached to be a part of it.

CNN has reached out to the states for comment.

In his call with senators on Thursday, President Trump heard a similar message he received a day earlier from business leaders: the country needs to dramatically increase its testing capabilities before states can reopen.

In the phone call with Democratic and Republican senators, Trump was told by some lawmakers that without the increased testing, asymptomatic people may return to workplaces and unknowingly spread the virus, creating further contagion, according to people familiar with the call.

Trump countered by saying his administration had worked to scale up testing and repeated his dubious claim that the United States had tested more people than any other country.

He also pointed to a new test that people could administer themselves that uses saliva, a person familiar with the conversation said.

As he did on Wednesday during his briefing, Trump told senators that individual states — and not the federal government — should be responsible for testing, but that the administration would support governors in their efforts to scale up tests.

The World Health Organization is warning the global public that drinking alcohol does not protect you against Covid-19 or kill the virus, and excessive alcohol consumption can be harmful for your health –– even compromising the body's immune system.

WHO officials in a statement on Tuesday called for governments around the world to enforce the measures in place that limit alcohol consumption and to avoid any relaxation of regulations during the coronavirus pandemic.

For instance, "alcohol is consumed in excessive quantities in the European Region, and leaves too many victims," Carina Ferreira-Borges, program manager for WHO Europe's alcohol and illicit drugs program, said in the statement.

During the pandemic, "we should really ask ourselves what risks we are taking in leaving people under lockdown in their homes with a substance that is harmful both in terms of their health and the effects of their behavior on others, including violence,” Ferreira-Borges said.

WHO's statement comes at a time when misinformation around Covid-19 continues to circulate online –– including the myth that consuming high-strength ethyl alcohol or ethanol can kill the coronavirus.

WHO said "it does not" and that alcohol, especially if it has been adulterated with methanol, could result in "severe health consequences" or death.

The Spanish government announced they are putting in place a so-called "minimum vital income" program starting in May to help more than a million households, according to a government statement Thursday.

The program will be permanent, not temporary as originally envisioned, to help the hardest-hit families through the coronavirus economic crisis. The plan is designed to help those not eligible for other forms of aid, such as unemployment benefits.

The government estimates that among the more than a million households, which cannot meet basic needs, some 10% are single-parent families. 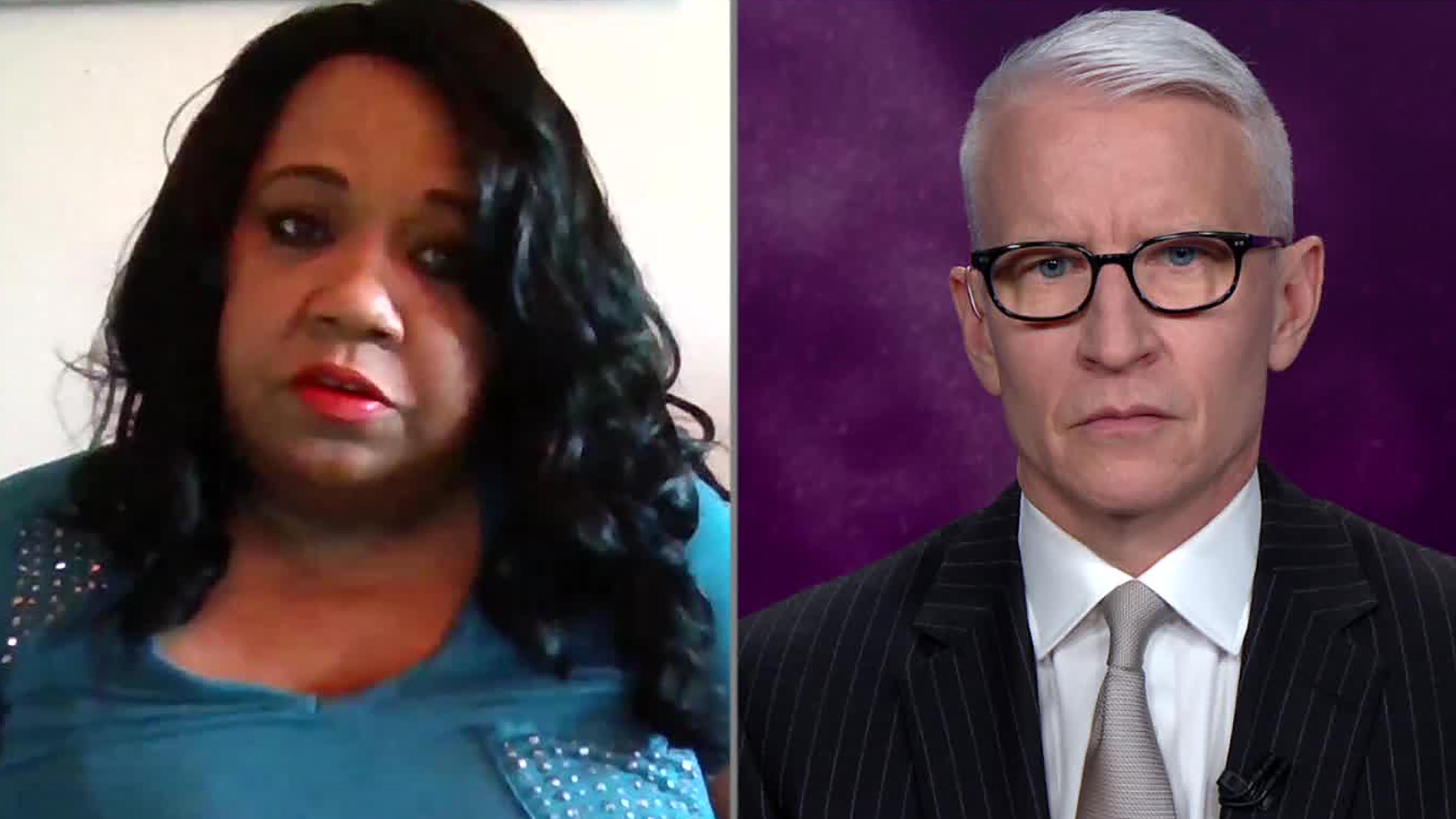 Pam Hill, a grocery store employee, said she was not given the equipment necessary to protect herself from the coronavirus until recently.

She told CNN's Anderson Cooper the first employee at her workplace tested positive for Covid-19 on March 17, but even then, other employees did not receive any kind of protection until weeks later.

The store did not provide shields until the end of March and employees did not get masks or hand sanitizer until the beginning of April, according to Hill.

Hill said she is now without health insurance after being out sick with what she believes was the coronavirus last month.

She said their health insurance is based on how many days or hours they work. Since she was out sick, she did not qualify for insurance in April, and probably will not qualify again in May.

"So right now I'm medically not covered for this month and probably next month as well," she said.

"We want to serve the community that we work in. We know that with everything else being closed down that we're are the only pipeline for the community to come into shop and get food for their families. We don't mind being there on the frontline, but we want to be protected and we also want the company to protect us from this," she said.

House Speaker Nancy Pelosi said Thursday that negotiations continue over how to extend funding for the small business relief program that has now run dry, reiterating Democratic demands for additional funding for state and local governments and hospitals.

Republicans have advocated for a clean increase in program funding, saying other concerns can be addressed in a later bill.

“Right now we’re in those negotiations. My staff and the staff of leader Schumer spoke with Secretary Mnuchin yesterday and will do so again today,” Pelosi said on her weekly press call. “We want to support what we did with the PPP but we want to make sure that as it gets more money, many more people get more access to the credit.”

She said Democrats are “hopeful they will come back with something that strikes a balance.”

Some context: CNN has reported that the Small Business Association ran out of money for the Paycheck Protection Program as of this morning.

Negotiations on Capitol Hill have yet to generate a path forward to replenish the money, as the US economy continues to stagger under the pressure of near-nationwide closures.

Treasury Secretary Steven Mnuchin and Democrats will reconvene Thursday to try and reach agreement on a package that will immediately increase funding for the program.

Singapore reported the largest single-day increase with 728 new coronavirus cases on Thursday, bringing the total to at least 4,427, according to the Singapore’s Ministry of Health.

Among the new cases, 81% are linked to known clusters, of which the vast majority are foreign workers residing in dormitories, the ministry said.

Last week, Singapore announced that it would move foreign workers into alternative living arrangements such as military camps and vacant government apartments amid a spike in cases.