Lam said the government was hoping to reach a third agreement with AstraZeneca and is looking for a fourth supplier.

“The first million are expected to arrive in Hong Kong in January next year, earliest,” Lam said of the Sinovac vaccine, which only requires one dose.

"The other one is in Germany, BioNtech & Pfizer, and this vaccine uses another different another technology that is mRNA, again 7.5 million doses will be available. The first batch of 1 million doses will arrive in Hong Kong, in the first quarter next year, earliest”, Lam said.

Elderly citizens, sufferers of chronic illnesses and care workers from nursing homes will be first to receive the vaccine, Lam said.

Hong Kong diagnosed 86 new Covid-19 cases in the city on Thursday, five of which are imported and 37 are untraceable.

Thursday saw a major milestone in the authorization process for a Covid-19 vaccine in the US -- a milestone that comes as the country is deep into a health crisis that is only worsening.

The Food and Drug Administration's Vaccines and Related Biological Products Advisory Committee voted to recommend the agency grant emergency use authorization (EUA) to Pfizer and BioNTech's Covid-19 vaccine. The agency will now decide whether to accept that recommendation, but has signaled it is likely to do so.

Officials are scheduled to meet again next week to discuss Moderna's EUA application.

While the green light for a Covid-19 vaccine will offer a light at the end of the tunnel, leading experts have warned the worst days of the pandemic are still ahead for the US. More case surges are likely to take shape as a result of Thanksgiving travels and gatherings that could drive infection numbers even higher. The US is now averaging more than 210,000 new cases daily.

Hospitalization numbers break records daily -- with Thursday reporting the highest number of Covid-19 patients nationwide since the pandemic's start: more than 107,200, according to the COVID Tracking Project. A CNN analysis of newly released data from the US Department of Health and Human Services showed that at least 200 hospitals across the US were at full capacity last week. And more than 90% of ICU beds were occupied in a third of all hospitals.

And the virus is claiming more American lives each day than ever before. Wednesday saw the highest daily death toll the US has reported since the start of the pandemic, with a staggering 3,124 Covid-19 deaths. More than 2,700 deaths were reported Thursday.

"We are in the time frame now that probably for the next 60 to 90 days, we're going to have more deaths per day than we had in 9/11," said Dr. Robert Redfield, director of the Centers for Disease Control and Prevention (CDC). 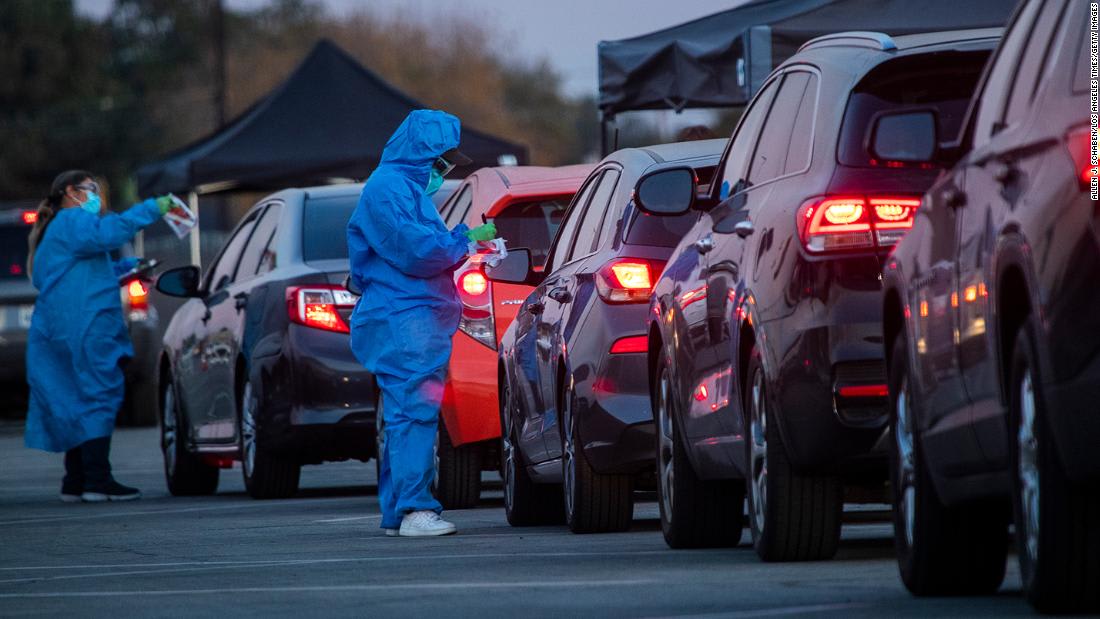 The US is a step closer to a Covid-19 vaccine authorization. But that's unlikely to impact the dark and deadly days ahead

Russia reported 28,585 new Covid-19 cases and 613 deaths on Friday -- the highest daily increase in fatalities recorded since the beginning of the pandemic, according to the data published by the country’s coronavirus task force.

As of December 11, Russia reported a total of 2,597,711 cases and 45,893 deaths. CNN and other media have previously reported that Russia’s method for coronavirus-related fatalities has been questioned by independent observers, and that the real toll could be much higher.

Excess deaths recorded by Rosstat between April and October stand at roughly 164,000 compared to the same period in 2019.

One confirmed infection was found from Youngshin Church on Thursday and the heath authority tested 158 close contacts of the confirmed case.

Among those, 27 additional cases tested positive on Friday.

Earlier this year, the Daegu branch of the Shincheonji religious group became one of the country’s biggest single clusters, linked to more than 5,200 cases.

Hong Kong has banned three international airlines from flying specific routes into the city for two weeks, under a new law aimed at stopping the spread of Covid-19, the city’s government said on Friday.

Flights by the three airlines were found to have one or more Covid-positive passengers aboard, according to the statement.

Under strict new rules, the Hong Kong government is prohibiting the airlines from flying those routes into the city for 14 days.

What triggered the bans?

Failure to comply with measures: The flight operated by KLM from Amsterdam to Hong Kong on November 27 only had one Covid-19 positive passenger, but was also added to the 14-day blacklist. The Hong Kong government said it reserves the right to block the route for 14 days if a passenger on board an aircraft carrying Covid-19 fails to comply with pandemic control measures.

KLM’s Amsterdam-Hong Kong and Nepal Airlines’ Kathmandu route will be put out of action until December 17, while Emirates will be unable to fly into Hong Kong from Dubai or Bangkok until December 18, the Hong Kong government said.

CNN has reached out to Emirates, KLM and Nepal Airlines for comment.

The US Food and Drug Administration is likely to recommend against giving pregnant women the upcoming Pfizer vaccine, a member of the FDA’s Vaccines and Related Biological Products Advisory Committee said Thursday.

Dr. Paul Offit's comments came after the committee voted to recommend the vaccine for an emergency use authorization (EUA).

“I think the recommendation will be that pregnant women not receive this vaccine until we know more,” Offit told CNN’s Wolf Blitze

“However, as shown in this trial, whenever you do any sort of large clinical trial, invariably you do get pregnant women because women don't find out they're pregnant until after they've gotten one or two doses. So, there were about two dozen women in this trial that were pregnant and there doesn't appear to be any harmful effects on them, but their babies haven’t been born yet to find out

Offit said this will also happen when the vaccine rolls out to health care workers and people in long-term care facilities. Some of those vaccinated will invariably include pregnant women.

The committee voted 17-4, with one abstention, in favor of recommending the FDA grant Pfizer an EUA. The FDA will now decide whether to accept the recommendation but has signaled that it will issue the EUA for the vaccine.

Singapore will welcome travelers from Taiwan beginning December 18, according to a press release from Singapore's Civil Aviation Authority.

Visitors from Taiwan can apply for a single-entry "Air Travel Pass" to enter Singapore on or after next Friday.

Travelers must have stayed in Taiwan for 14 consecutive days prior to departure.

Visitors will be required to take a Covid-19 PCR test upon arrival. If negative, they will be allowed to move freely throughout Singapore without serving a stay-at-home notice, the aviation authority added.

"Taiwan has a comprehensive public health surveillance system and has displayed successful control over the spread of the Covid-19 virus. Over the past 28 days, Taiwan has zero local Covid-19 cases. The risk of importation from Taiwan is low," the press release said.

The US Food and Drug Administration and the Federal Trade Commission said Thursday they had warned Paradigm RE, LLC for selling unapproved products that claim to mitigate, prevent, treat, diagnose or cure Covid-19.

The FDA said it considers the product, which the company sells under the name “Thymosin Alpha 1,” an unapproved new drug sold in violation of US law. It is also misbranded.

The company’s website implies Thymosin Alpha 1 was tested in government-designated treatment centers and helps with treatment. The website claims “the findings were that there was a significant reduction of mortality in the 28-day variation” because it improved oxygen levels in the bloodstream and reduced lung injury, according to the FDA.

The FDA asked the company to stop selling the product immediately and gave it 48 hours to email the government and describe what specific steps it took to correct violations.

Germany on Friday announced it had recorded 598 coronavirus fatalities in the previous 24 hours, according to data from the Robert Koch Institute, the country's center for disease control.

It was Germany's highest single-day coronavirus death toll since the pandemic began.

The nation also registered a record 29,875 new confirmed infections on Friday -- roughly 6,000 more than the day before.

German lawmakers will meet in the coming days to tighten lockdown measures in a bid to get the surge in infections under control.

According to Johns Hopkins University, there are now 1,287,092 confirmed coronavirus infections in Germany, including 21,064 related deaths.