The company excluded people with a history of severe allergic reactions to vaccines from their SARS-COV-2 RNA vaccine trial, according to Pfizer data released by the US Food and Drug Administration on Tuesday.

Participants with a “history of severe adverse reaction associated with a vaccine and/or severe allergic reaction (eg, anaphylaxis) to any component of the study intervention(s)” were not included in the pool of 44,000 trial volunteers.

According to the US Food and Drug Administration's evaluation of the Pfizer data, there was a slight increase in events that may be considered allergic reactions in the vaccine group. The FDA’s independent analysis said “A slight numerical imbalance of adverse events potentially representing allergic reactions, with more participants reporting hypersensitivity-related adverse events in the vaccine group (137 [0.63%]) compared with the placebo group (111 [0.51%])”

Some background: The UK issued new guidance on Wednesday, now advising that people with a “significant history of allergic reactions” not receive the Pfizer/BioNTech coronavirus vaccine after two health workers who received the vaccine suffered allergic reactions.

British health authorities are conducting an investigation into the two incidents. In a statement, Pfizer said “As a precautionary measure, the MHRA has issued temporary guidance to the NHS while it conducts an investigation in order to fully understand each case and its causes. Pfizer and BioNTech are supporting the MHRA in the investigation.”

Both staff members reportedly had a significant history of allergic reactions and carried adrenaline autoinjectors, according to PA Media. Thousands overall are believed to have been vaccinated in the UK on Tuesday.

The FDA's vaccine advisory group is meeting on Thursday to discuss a possible emergency use authorization of the Pfizer-BioNTech Covid-19 vaccine in the US.

The FDA's Vaccines and Related Biological Products Advisory Committee will meet in less than 24 hours to discuss Pfizer and BioNTech's application for emergency use authorization for a coronavirus vaccine in the US.

Pfizer says its vaccine is 95% effective and doses are already being rolled out in the UK.

But, in the meantime, the US continues to report a record number of hospitalizations as Covid-19 cases and deaths rise across the country.

Here's a look at where cases are rising across the country: 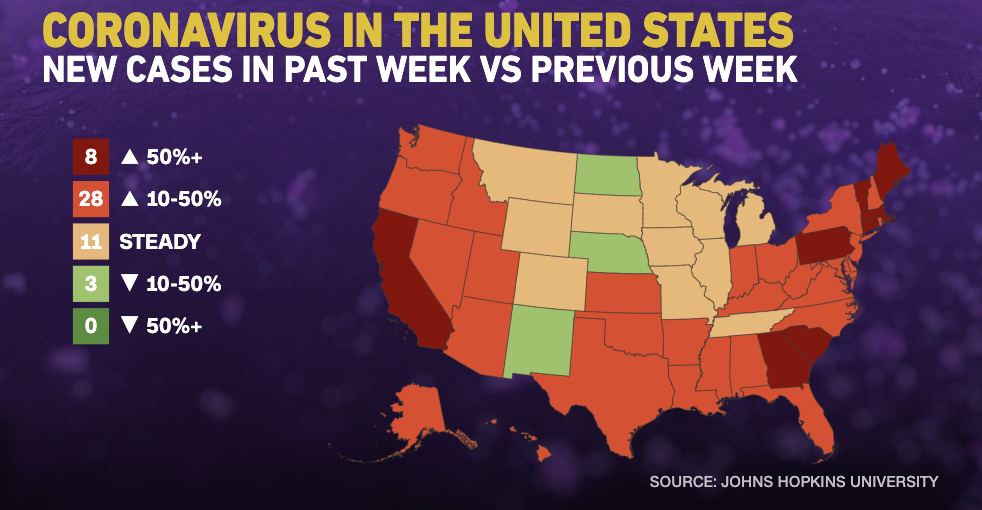 Rick Gates, Walgreens’ senior vice president of pharmacy and healthcare, said that the company has been working closely with states as nursing homes and long-term care facilities prepare for coronavirus vaccinations.

The federal government made a deal with Walgreens and CVS to distribute vaccines to nursing homes once they are approved by the US Food and Drug Administration.

Gates said that Walgreens is planning to increase staffing in certain areas for the care facilities.

Gates also said Walgreens is in the process of creating apps and ways to sign up online so people can schedule vaccinations once it becomes more widely available.

Pfizer said it was supporting British health authorities in their investigation of two reported cases of allergic reaction to the Pfizer/BioNTech coronavirus vaccine in the UK.

“We have been advised by MHRA [Medicines and Healthcare products Regulatory Agency] of two yellow card reports that may be associated with allergic reaction due to administration of the COVID-19 BNT162b2 vaccine,” Pfizer said in a statement Wednesday.

“As a precautionary measure, the MHRA has issued temporary guidance to the NHS while it conducts an investigation in order to fully understand each case and its causes. Pfizer and BioNTech are supporting the MHRA in the investigation,” it added.

The statement concluded: “In the pivotal phase 3 clinical trial, this vaccine was generally well tolerated with no serious safety concerns reported by the independent Data Monitoring Committee. The trial has enrolled over 44,000 participants to date, over 42,000 of whom have received a second vaccination.”

The two health workers – who both carried an adrenaline auto injector and had a history of allergic reactions – developed symptoms of anaphylactoid reaction after receiving the vaccine on Tuesday.

US Health and Human Services Secretary Alex Azar on Wednesday told CNN’s Alisyn Camerota that he was learning of the allergic reactions experienced by two people in the UK to the Covid-19 vaccine “just with you, right now.”

Camerota asked Azar if he thought it would change anything in the United States, such as a pending emergency use authorization for Pfizer/BioNTech’s vaccine candidate by the US Food and Drug Administration.

Azar said he wanted to make sure the FDA had an opportunity to look at that data, adding he is certain they’ll be speaking with UK regulators, like always.

“FDA is going to not cut any corners,” Azar said. “They’re looking at the data. They’re looking under the hood at everything. So I’m sure that’ll be something the FDA looks at here, because we want to make sure that any vaccine that comes out in America has the full gold-standard stamp of approval of the FDA career people.”

Yesterday: The United Kingdom became the world's first nation to begin vaccinating its citizens with a fully vetted and authorized Covid-19 shot, a landmark moment in the coronavirus pandemic.

The first Briton to get the Pfizer/BioNTech vaccine received the first of two doses Tuesday, less than a week after the UK became the first country to approve it.

Men with Covid-19 appear to face higher odds of needing intensive care and dying compared with women who have the disease, according to a new study.

The study, published in the journal Nature Communications on Wednesday, suggests that even though there is no significant difference in the proportion of men versus women testing positive for Covid-19, men have "almost three times the odds" of requiring intensive treatment, and higher odds of death.

The study included data on more than 3 million Covid-19 cases reported from around the world between January and June. The researchers – from the University College London and the University of Cape Town – took a close look at the data by sex and severity of disease.

The researchers determined that while both sexes have an equivalent risk of infection, the male sex was associated with a higher risk of severe disease and death.

The study comes with some limitations, including that more research is needed to determine which specific biological factors may be driving these differences.

Health and Human Services Secretary Alex Azar said the US Food and Drug Administration could approve the Pfizer coronavirus vaccine in a “matter of days.”

Azar said the vaccine would then be shipped to “wherever the governors have told us they want it to go.”

“20 million people should get vaccinated in just the next several weeks and then we’ll just keep rolling out vaccines through January, February, March as they come off the production lines,” Azar said.

Azar said the general population should start seeing vaccines available to around February and March.

“The governors will decide how to prioritize and get that out there,” he said.

After registering a record number of new coronavirus cases in the state of California in one week, residents of Southern California and the San Joaquin Valley received a text on Tuesday asking them to stay home and abide by newly enacted health orders, according to a tweet from California Governor's Office of Emergency Services.

The California text message comes as the state is reporting alarming coronavirus numbers. The state reported 169,354 new cases over the past seven days, which is the highest any state has reported over the course of the pandemic. Over the last two weeks, daily case counts in the state have more than doubled.

California also reached a grim milestone Tuesday when it recorded more than 20,000 deaths.

In the past two weeks, hospitalizations rose by 71% and ICU admissions saw a 68.7% increase, California Health and Human Services Secretary Mark Ghaly said at a news conference Tuesday.

Ghaly expressed concern that with the strain, highly trained health care workers will "not be able to provide the kind of care Californians have come to expect.”

Both Southern California and the San Joaquin Valley found themselves under the new health orders Sunday night as ICU capacity in each fell under the 15% threshold set by Gov. Gavin Newsom.

California is not the first state to use cellphones to warn residents about coronavirus since the beginning of the pandemic — in April, New York City sent an emergency alert to phones asking all licensed health workers to support its health facilities. And in October, officials in Utah sent an emergency alert to every phone in the state to warn about rapidly rising cases. 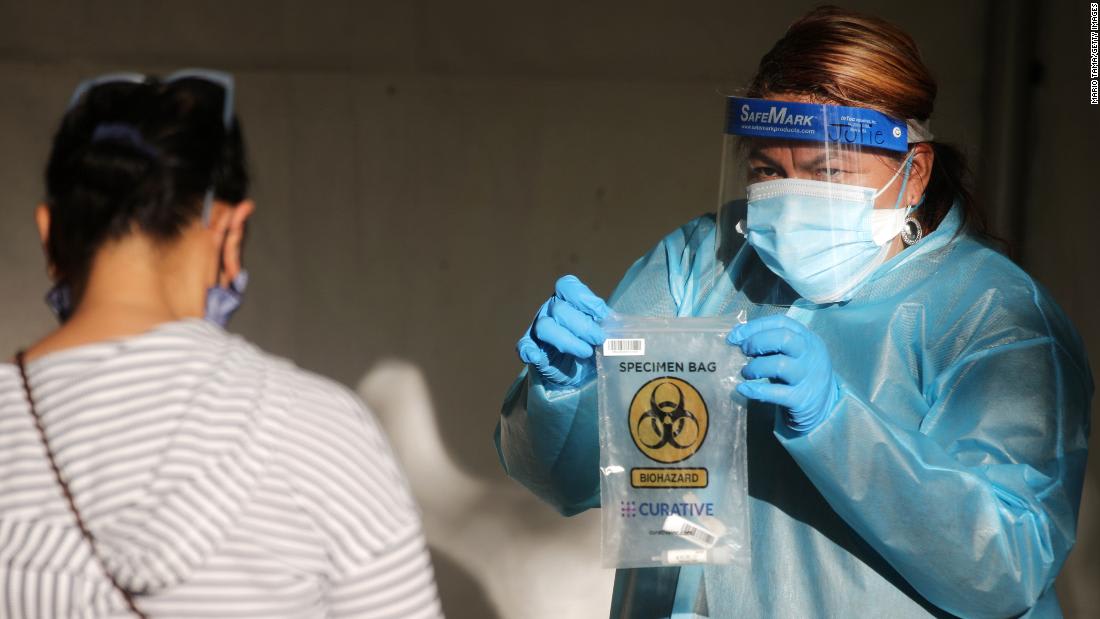 27 million Californians receive texts to stay home after the state added nearly 170,000 cases in a week

Some hospitals in coronavirus hotspots have brought in traveling nurses to help them care for the influx of patients.

Contracts range from 4 to 13 weeks, nurse Laura Liffiton explained. She’s been in New York, Arizona and Wisconsin over the past few months. She said that she’ll never forget the patients she has treated.

Morgan Fitzsimmons, a traveling nurse also currently in Wisconsin, said that right now is “probably the most exposure that I've had to Covid-positive patients in the ER since everything has kind of begun.”

She said she treats patients like they are her own family.

“Everyone is a loved one. Whether this is a pandemic or this is before or after, we're in this to help people. And I would like the best care for my parents … So I would like to be able to provide that for people and their family members when they're feeling their worst,” she said.