There are at least 14,634,911 cases of coronavirus in the US and at least 281,513 people have died, according to data from Johns Hopkins University.

As of Sunday afternoon, 53,574 new cases and 327 new deaths have been reported in the US since midnight. The total includes cases from all 50 states, the District of Columbia, and other US territories, as well as repatriated cases.

More than one million cases were reported in the US within the first five days of December and the last four out of five days saw more than 200,000 new daily Covid-19 cases.

The total number of probable and confirmed cases in South Carolina stands at 232,099, DHEC data showed.

Italy has recorded a total of 60,078 Covid-19 deaths, after the country registered an additional 564 deaths on Sunday, according to data from the Ministry of Health.

Italy now has the sixth highest number of coronavirus deaths in the world, according to John Hopkins University.

The country also recorded 18,887 new confirmed cases of coronavirus on Sunday, bringing the total number of cases to 1,728,878.

New Jersey reported 6,046 new Covid-19 cases on Sunday, marking a new record for the highest new daily case count for the state since the pandemic began, according to Gov. Phil Murphy.

The deaths of 16 more New Jersey residents due to Covid-19 was announced on Sunday, bringing the state’s death toll to 15,485.

There are currently 3,214 hospitalizations with 622 patients in intensive care, according to the state’s Covid-19 data dashboard.

To note: These numbers were released by the state of New Jersey, and may not line up exactly in real time with CNN’s database drawn from Johns Hopkins University and the Covid Tracking Project.

Sen. Mark Warner, a Democrat from Virginia, told CNN there could be an agreement on a stimulus bill as early as Monday.

Warner, who is part of a bipartisan group of eight senators hashing out a compromise on a stimulus bill, said they are close to an agreement.

“I think we have got the top line numbers done. We are working right now on language so that we can have – as early as tomorrow – a piece of legislation," he said.

The Democratic Senator from Virginia says it will be a four-month emergency relief package with a $908 billion price tag.

“We put additional assistance in finally for broadband, which we all know is an academic necessity and additional dollars around the vaccine distribution; assistance for hospitals," he added.

Warner predicts, despite the fact that neither Republicans nor Democrats are getting everything they would like in the bill, there will be enough votes to support passage of the measure.

“I have pretty high assurance that it would get way beyond 60 votes," he said.

Moncef Slaoui, chief scientific advisor for Operation Warp Speed, told CNN on Sunday that he is hopeful that by the end of January, there should be a “quite significant” decrease in morbidity and mortality associate with the elderly population.

The US Centers for Disease Control and Prevention and its advisory committee, ACIP, have recommended that the vaccine be used in health care workers and those in long term care facilities, Slaoui said, adding that, unfortunately, about 40 to 50% of deaths are happening in the elderly population in care homes.

“We should be able to have immunized that full population, and the healthcare workers that take care of them by the end of the month of December or by the middle of the month of January,” he said.

The vaccine efficacy as it has been seen, he said, “actually starts reasonably quickly” after the first dose and is then maintained further with the second dose.

“Therefore I’m hopeful that by the end of the month of January, we should already see quite a significant decrease in the mortality and severe morbidity associated in the elderly population” said Slaoui.

He added that there are many other people who have comorbidities that live outside these facilities and that it will take more time to immunize them.

“By the month, the middle of the month of March, we should have really covered most of the highly susceptible population, about 100 million people,” Slaoui said.

Moncef Slaoui, chief scientific advisor for Operation Warp Speed, told CNN that he thinks President-elect Joe Biden’s plan to ask all Americans to wear masks for his first 100 days in office is a good idea.

“I think it’s a good idea, it’s never too late,” Slaoui said. “This pandemic is ravaging the country.”

Slaoui said that everyone needs to take precautions, wear masks, wash their hands, keep their distance and “remain aware that this virus is a killer.”

��We have a vaccine, there is light at the end of the tunnel but we will not all have the vaccine in our arms before May or June so we need to be very cautious and vigilant,” he added.

More background: Biden told CNN on Thursday that he will ask Americans to wear masks for the first 100 days after he takes office, in a sign of how Biden's approach to the virus will be dramatically different from President Trump's response.

"Just 100 days to mask, not forever. One hundred days. And I think we'll see a significant reduction," Biden said Thursday.

Health officials in the United Kingdom expect to have up to 4 million doses of the Pfizer/BioNTech vaccine available by the end of December.

The UK became the first Western country to authorize a Covid-19 vaccine on Wednesday, marking a pivotal moment in the global fight against coronavirus.

"We know the first batch of 800,000 [doses] is making its way to the country now... and we are expecting in the low millions, so up to 4 million doses, to be with us by the end of December," Saffron Cordery, deputy chief executive of NHS Providers told Sky News on Sunday.

Vaccinations to begin next week: The health official said 50 hospital hubs across the UK have already received their allocation of the vaccine, and that the distribution of the vaccine is "really well underway now." Covid-19 vaccinations are set to begin on Tuesday in England, Wales and Scotland.

The UK has ordered 40 million doses of the Pfizer/BioNTech vaccine, enough to vaccinate 20 million people or one-third of the UK population.

“Despite the huge complexities, hospitals will kickstart the first phase of the largest scale vaccination campaign in our country’s history from Tuesday. The first tranche of vaccine deliveries will be landing at hospitals by Monday in readiness," professor Stephen Powis, NHS England’s national medical director, said in a news release on Sunday.

"Robust" authorization process: Cordery also addressed concerns regarding the safety of the jab, saying its "authorization and approval process has been incredibly robust."

The head of Britain's medicines regulator also put out assurances on Sunday, saying the Pfizer/BioNTech jab is "as safe as any general vaccine."

"My main message is that the safety profile of the Covid-19 vaccine is really no different than any other vaccine -- you might have a mild symptom but it will probably disappear in a day or two, and nothing at all of serious nature," June Raine, head of the UK's Medicines and Healthcare products Regulatory Agency (MHRA), told the BBC.

Raine also explained health officials will carefully monitor people after having the vaccine.

Some hospitals are stocking enough iPads to rival a modest Apple store. But the reason for this reflects a grim reality: They're being used to connect Covid-19 patients with their families -- sometimes, for the last conversation they'll ever have.

When Dr. Mark Shapiro posted about a patient saying goodbye to his family via an iPad, he wanted to communicate to others the severity of this pandemic.

"As the ICU (intensive care unit) team makes ready, there's a key step we mustn't forget," Shapiro, who is a hospitalist at Santa Rosa Memorial Hospital in California, wrote on Twitter. "At first he says "No," but we encourage him. The nurse brings in the iPad. With the last air in his shattered lungs, he says goodbye to his family. Over an internet connection."

Hospitals have been overwhelmed by the thousands of patients coming in every day after contracting coronavirus. Across the US, there's been a shortage of hospital supplies for medical staff and beds for patients.

And the contagious nature of the illness has forced hospitals to limit, and often forbid, visitation rights to mitigate its spread. The latest solution has been the implementation of iPad stations and other virtual technology so patients can communicate with their friends and family -- often, for the last time. 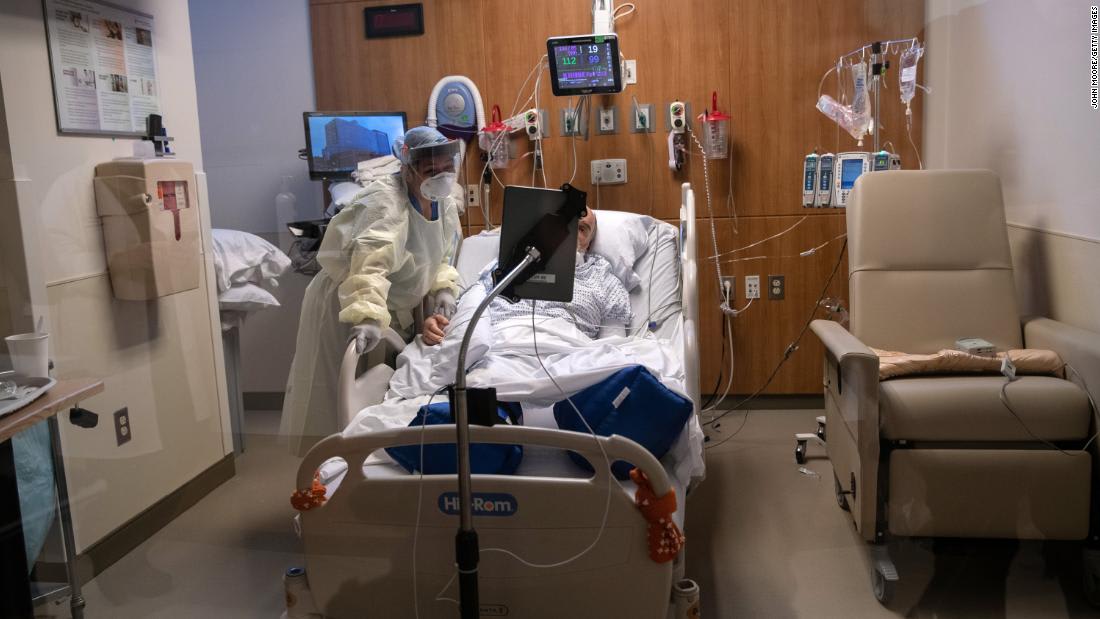 They couldn't say goodbye in person, so ICU patients are using tablets instead