New guidance from the US Centers for Disease Control on Wednesday says quarantine periods can be shorter than 14 days for some people exposed to Covid-19.

The CDC continues to recommend quarantining for 14 days as the best way to reduce the risk of spreading Covid-19, Dr. Henry Walke, who serves as the agency's Covid-19 incident manager, said during a telebriefing.

People who have been exposed should still watch for symptoms for 14 days, especially if they end quarantine earlier, Walke said.

“I want to stress that we are sharing these options with public health agencies across the country, so that they can determine how long quarantine period should last in their jurisdictions based on local conditions and needs,” Walke said. “Everyone should follow this specific guidance from their local public health authorities about how long they should quarantine.”

Reducing the length may make it easier for people to quarantine, Walke said, and lessen stress on the public health system as new infections are rising quickly.

Tens of thousands of people in the UK will begin receiving the Pfizer/BioNTech Covid-19 vaccine starting next week, after the UK became the first western country to authorize use of a coronavirus vaccine on Tuesday, the UK’s Department of Health and Social Care (DHSC) said.

The initial rollout of the vaccine – comprised of two doses taken three weeks apart – will prioritize care home residents and staff, people over 80 and health and care workers, DCHS said in a press release.

The UK has already ordered 40 million doses, “enough to vaccinate up to a third of the population, and the majority of doses are anticipated in the first half of next year,” the statement said.

Here's how the distribution process will work:

Senate Majority Leader Mitch McConnell reiterated the need for a bipartisan stimulus package before the end of the year, emphasizing that it must receive the President's signature to offer effective relief amid the coronavirus pandemic.

McConnell said on Wednesday "we're seeing cracks starting to form in the Democratic leader's stone wall," referencing the Senate Democrats who joined with some of their Republican colleagues to put forth a bipartisan stimulus proposal aimed at breaking through the long-stalled negotiations.

But, as he did yesterday, McConnell made it clear that his support is firmly behind the White House-backed plan that he's been drafting with input from Treasury Secretary Steven Mnuchin and White House Chief of Staff Mark Meadows.

"I hope our Democratic colleagues will finally let Congress pass a bipartisan bill that the President will actually sign into law and do so soon," he said, noting that his proposal includes popular measures like a new round of Paycheck Protection Program and an extension of emergency federal unemployment benefits that are due to expire at the end of the year.

Some context: Moments before McConnell's speech on the Senate floor, Treasury Secretary Steven Mnuchin told reporters that President Trump would sign the bill McConnell is spearheading.

A staff member for the Cleveland Browns has tested positive for Covid-19, the team announced in a statement on Wednesday.

Cleveland has closed its practice facility and all meetings will take place remotely while the team conducts contact tracing.

The NFL prohibited all in-person team activities the last two days, citing the continued increase in Covid-19 cases around the country.

"The team will continue to consult with the league and medical experts on the appropriate next steps as the health and safety of our players, coaches, staff and the entire community remains our highest priority," the statement said.

The 8-3 Browns are scheduled to face the 8-3 Tennessee Titans on the road this Sunday.

The coronavirus vaccine developed by Pfizer and BioNTech is safe for people who have already had Covid-19, according to BioNTech’s chief medical officer, Dr. Özlem Türeci.

"We have included in our trial, people who were and who were not infected with SARS-CoV2 before, and we have not seen any differences in the safety profile,” Türeci told reporters during a briefing Wednesday shortly after the UK government announced it had granted authorization for use of the vaccine.

People who had Covid-19 likely have some immunity to the coronavirus, but it’s not clear how long that protection lasts.

Pfizer announced last month that its vaccine was about 95% effective, when measured seven days after the second dose among people who have had Covid-19 and those who haven't.

According to US Food and Drug Administration guidance to vaccine makers, "vaccine safety and COVID-19 outcomes in individuals with prior SARS-CoV-2 infection, who might have been asymptomatic, are important to examine because screening for prior infection is unlikely to occur prior to administration of COVID-19 vaccines under [emergency use authorization]." When submitting data to the FDA, the agency says companies should break down the safety and efficacy data by "prior infection status at study entry."

Pfizer and BioNTech applied for an FDA emergency use authorization on November 20. An FDA advisory committee will meet December 10 to discuss the vaccine, and authorization could come shortly after.

"The President will sign the McConnell proposal that he put forward yesterday, and we look forward to making progress on that," he said.

When asked about Speaker of the House Nancy Pelosi's own stimulus plan, Mnuchin said, "I’m not going to publicly comment on that but I did speak to her briefly and there’s also the other bipartisan proposal."

Remember: There are three separate attempts happening right now on Covid relief and all of them — at least at this point — are a long shot.

Although there has been good news this week as vaccines get closer to rolling out, Covid-19 figures in the US continue to show a dire situation.

The country set a record for the number of people currently hospitalized due to coronavirus on Tuesday, and cases continue to surge across the country.

Here's a looks at where things stand in the US:

Here's a look at how Covid-19 hospitalizations have increased over time: 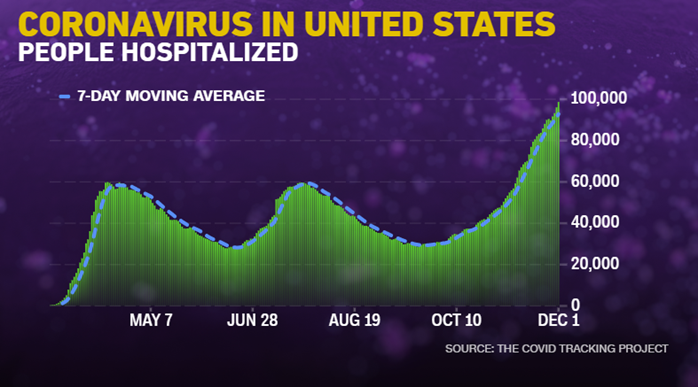 US stocks kicked off the day lower on Wednesday, pulling back after both the S&P 500 and Nasdaq Composite rose to record highs on Tuesday.

The ADP employment report missed expectations before the open, saying 307,000 jobs were added to the US economy in November. The government’s official report is due on Friday at 8:30 am ET.

Dr. Anthony Fauci, director of the National Institute of Allergy and Infectious Diseases, told Yahoo Sports on Monday that unrestricted sports stadium capacities will be one of “the last things that you’re gonna see” as the pandemic moves into 2021.

“We're gonna be vaccinating the highest-priority people [from] the end of December through January, February, March,” Fauci said in the interview. “By the time you get to the general public, the people who'll be going to the basketball games, who don't have any underlying conditions, that's gonna be starting the end of April, May, June. So, it probably will be well into the end of the summer before you can really feel comfortable [with full sports stadiums] – if a lot of people get vaccinated. I don't think we're going to be that normal in July. I think it probably would be by the end of the summer.”

Fauci said he thinks the possibility of full NBA arenas in July will be “cutting it close." When asked about full NFL stadiums in September, he said “oh, that’s possible. I think that’s possible.”

“We could get there by the end of the summer, and as we get into the fall of next year,” Fauci continued. But “if 50% of the people say, ‘You know, I don't want to get vaccinated,’ then it's gonna take considerably longer than that.”

In the Yahoo interview, Fauci pegged the percentage of the population that need to be vaccinated at “somewhere between 75 and 85 percent,” to return to normalcy. Not hitting that threshold didn’t mean normalcy would never return, “it would just take longer,” Fauci told Yahoo Sports.