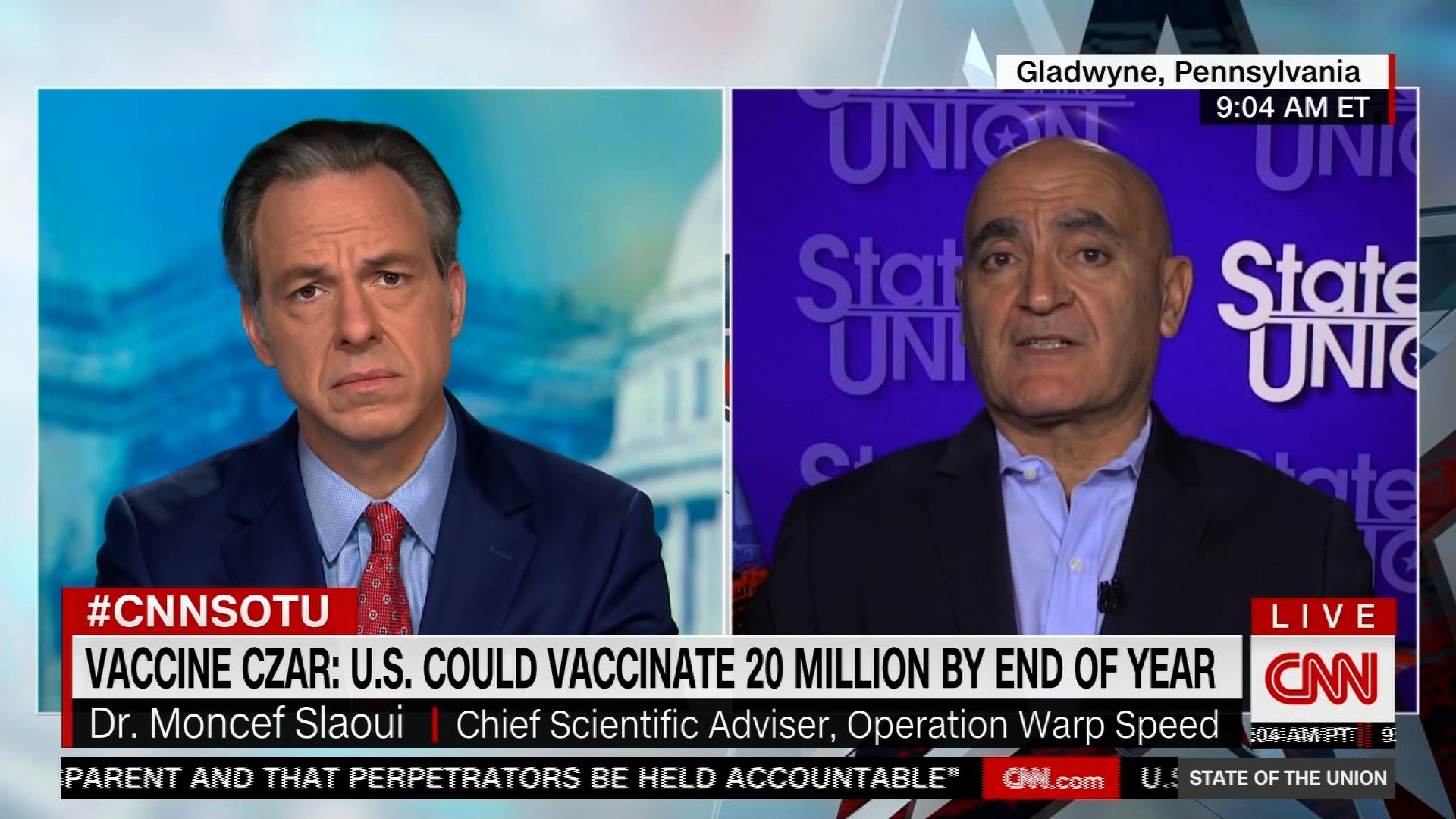 Dr. Moncef Slaoui, the head of the White House's coronavirus vaccine effort, said he hopes that the high efficacy rates of the vaccine candidates will encourage those who may we have concerns about vaccines to get one.

"I think people have misunderstood the level of efficacy that the FDA aimed for, which was to say, at least 50% efficacy. Maybe people thought that was the efficacy of the vaccine," he told CNN this morning. "It's 95%. It's almost a full insurance against this pandemic. I think and I hope that's gonna change people's perception."

He added that it's "very unfortunate" that the vaccine development process has become political.

"I really think it's very unfortunate that the whole process has been politicized and, therefore, the context has created conditions whereby people's perception has been exacerbated and we are where we are today," he said.

He added that the vaccines are safe for Americans.

"We know it's safe over a short period of time. And we can project that it's going to be safe over the longer time and we will measure that," he said. 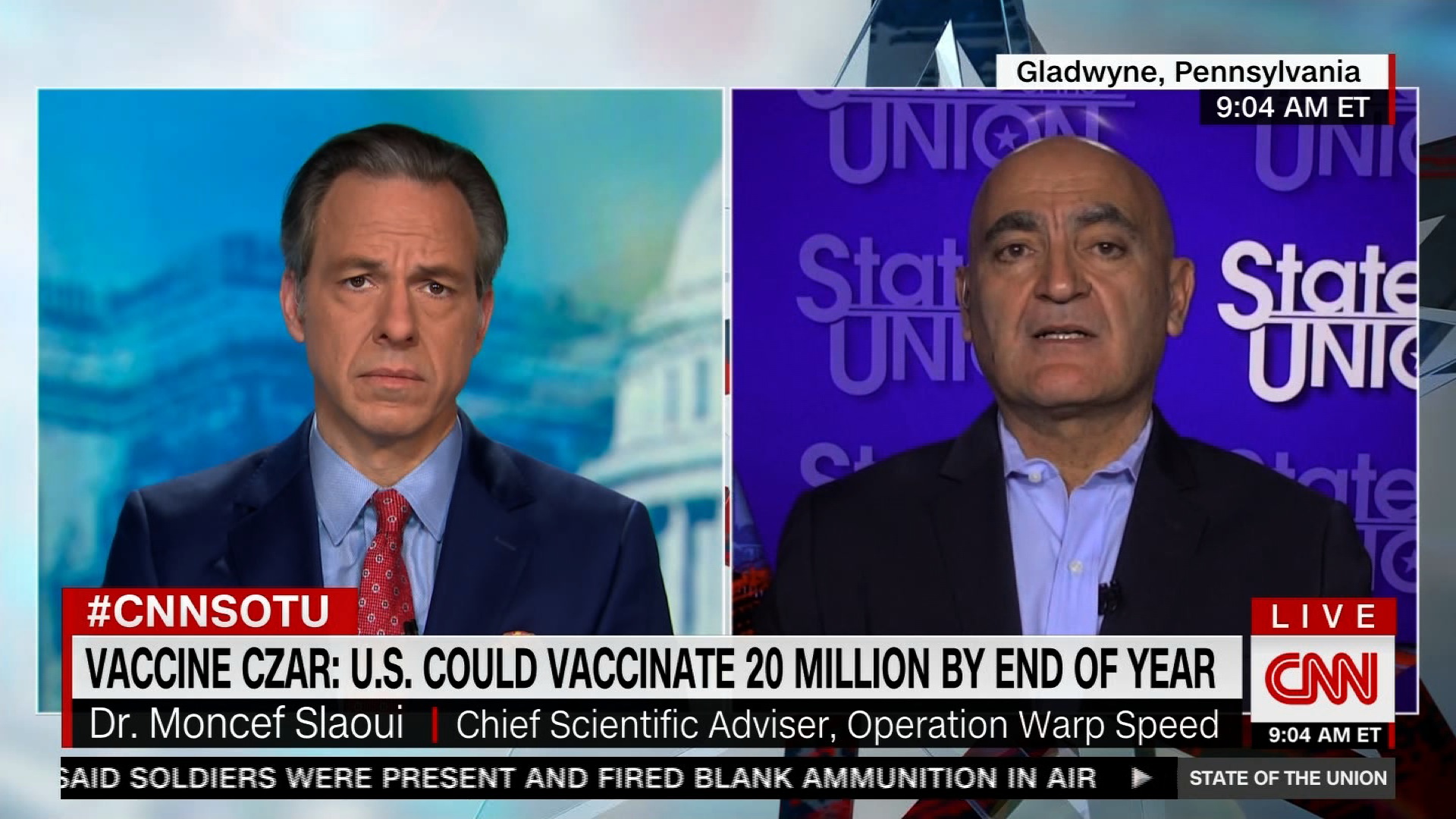 Dr. Moncef Slaoui, the White House vaccine czar, told CNN's Jake Tapper today that he expects children will be able to receive the coronavirus vaccine some time in the middle of next year.

Slaoui, who is the head of the US government's efforts to develop a vaccine, said at this point the lowest age that children have received a vaccine during the trials has been 12- to 14-year-olds in the Pfizer trials.

"I don't know whether the FDA will approve the vaccine for use down to that age. Maybe they will stop at 18 years of age and above," he said.

Slaoui said that the government is planning to run clinical trials into younger adolescents, and then toddlers and infants on "an expedited basis" in the coming months.

He said that he expects by May 2021 that " toddlers, 4, 5 years old and down to 12 months old" could receive a vaccines, adding that first, "we need to run those clinical trials on an expedited basis." 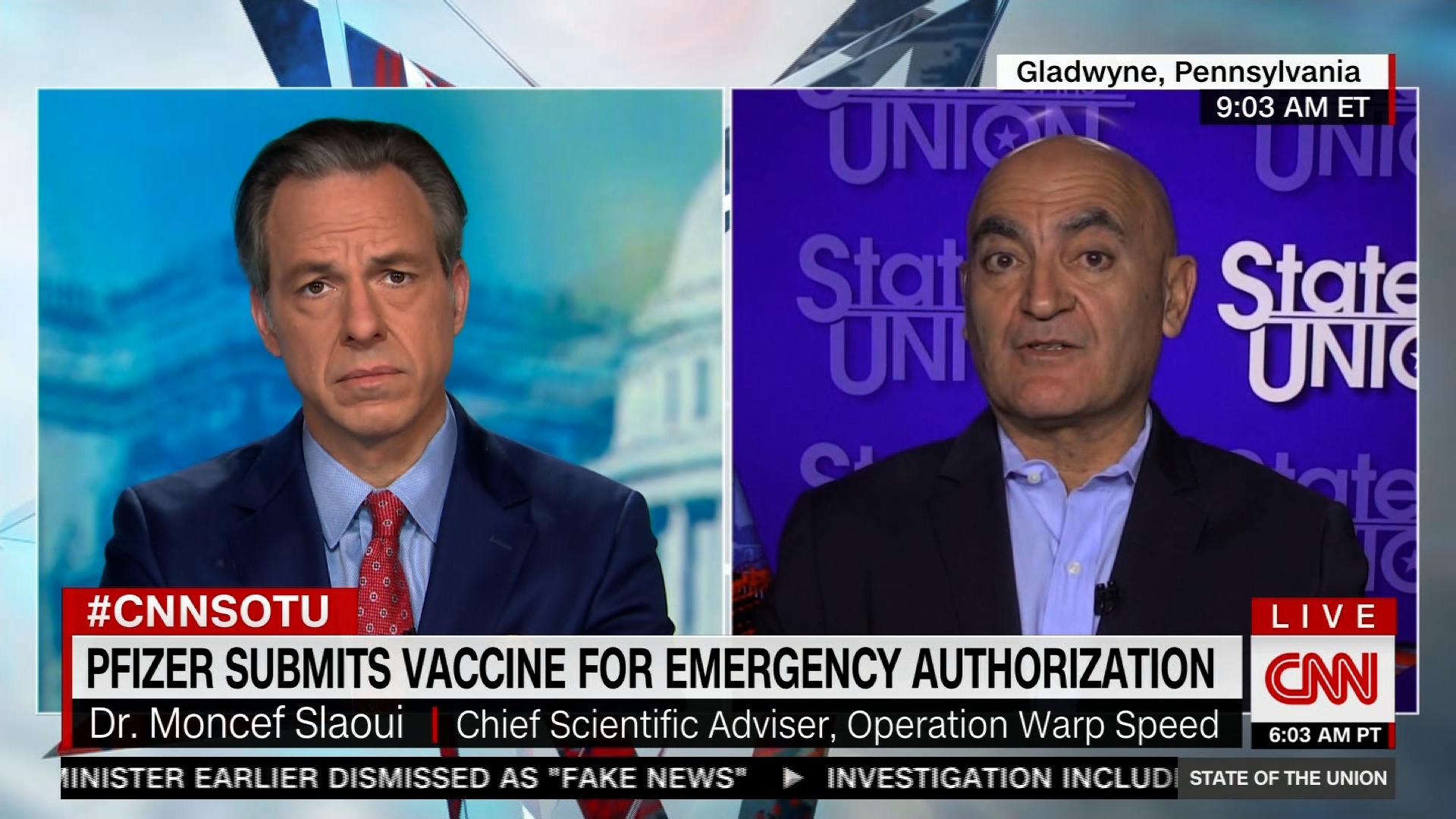 Dr. Moncef Slaoui, the head of the government's effort to develop a vaccine against Covid-19, said the first Americans to receive a coronavirus vaccine could get it as soon as Dec. 11.

On Friday, Pfizer submitted an application to the US Food and Drug Administration for emergency use authorization for their Covid-19 vaccine candidate, and an FDA vaccine advisory committee is slated to meet December 10.

Slaoui said that means, if approved, the vaccine could be rolled out the next day.

"Our plan is to be able to ship vaccines to the immunization sites within 24 hours from the approval, so I expect maybe on day two after approval on the 11th or the 12th of December," he told CNN Sunday morning.

Remember: Experts have said that initially there won't be enough vaccine for everyone. The highest-priority groups, which include health care workers, the elderly and people with underlying medical conditions, will get the vaccine first.

Vice President Mike Pence is waiting for Sen. Kelly Loeffler's "confirmatory test” whether it is confirmed the Georgia Republican is positive for Covid-19,  according to Pence’s spokesperson.

“As he awaits a confirmatory test from Senator Loeffler, Vice President Pence is in regular consultation with the White House Medical Unit and will be following CDC guidelines as he has in other circumstances when he has been a close contact," Devin O'Malley told CNN in a statement.

Pence campaigned alongside Loeffler Friday in Georgia in her runoff campaign to keep her Senate seat. Neither were wearing masks.

The Republican senator tested positive for the coronavirus on Friday, but a subsequent test came back as inconclusive on Saturday evening, according to campaign spokesperson Stephen Lawson.

Pence is tested every day for coronavirus.

Following a coronavirus outbreak among his staff ahead of the election, Pence continued to travel and campaign, citing US Centers for Disease Control and Prevention guidelines for "essential workers” which his staff said he was.

We're just four days away from Thanksgiving, and coronavirus cases are rising across the country.

The US surpassed 12 million cases of the virus yesterday — and nearly a quarter of those cases were recorded in November.

As Americans begin to prepare for the holiday, here's the latest on the pandemic:

UK Prime Minister Boris Johnson will on Monday set out the government’s plan for England to exit its second national lockdown on December 2, outlining what is expected to be a “strengthened” tier system for the country, Chancellor of the Exchequer Rishi Sunak said Sunday.

“The Prime Minister will be setting out more details tomorrow about the next steps and our fight against coronavirus,” Sunak told Sky News.

“The good news is, we will be exiting national restrictions on the 2nd of December, as the Prime Minister said at the beginning of the month-long restrictions,” he added.

According to the Chancellor, the Prime Minister is expected to chair a cabinet meeting on Sunday afternoon to “discuss the details for re-entering the tier system” in England.

“We’ll be going back into a tiered system, which is a far better way to tackle this on a localized approach,” Sunak continued.

While the Chancellor declined to comment on whether a 10 p.m. curfew on the hospitality sector would be extended, a government source said Sunday that the curfew would be extended by one hour to 11 p.m. as part of the government’s plan to exit the nationwide lockdown.

On Monday, the UK Scientific Advisory Group for Emergencies (SAGE) is also expected to publish documents showing that previous tier restrictions were ineffective, the source added.

It comes just a week after Public Health England’s Dr. Susan Hopkins said the government would need to consider “strengthening” the tier system until an effective vaccine becomes widely available in the UK.

“We have recognized that the tiering of the country has had a different effect in each area,” the UK medical adviser said Monday.

“We see very little effect from Tier 1 and I think when we look at what tiers may be there in the future, we will have to think about strengthening them in order to get us through the winter months,” she added.

Of the 68 new cases, seven were imported while 61 were locally transmitted, according to Dr. Chuang Shuk-kwan of the Center for Health Protection. Among the 61 local cases, 49 are connected to previously confirmed cases, and the source of infection for the remaining 12 cases could not be traced.

“The situation is very difficult to control,” said Dr. Chuang, who cited asymptomatic cases who continued their daily routine without knowing they had the virus.

Earlier on Sunday, Hong Kong’s Secretary for Food and Health Sophia Chan said that “we are now facing a very severe situation in Hong Kong, the number of unlinked cases has been increasing in the past few days.” Chan added that health officials are now testing more people to deal with the recent outbreak.

On Saturday, a much-anticipated quarantine free travel bubble between Singapore and Hong Kong was postponed for two weeks due to the recent spike in coronavirus cases in Hong Kong.

South Korea reported 330 new cases on Saturday, bringing the total to 30,733, according to Korea's Disease Control and Prevention Agency (KDCA). Among them, 302 were locally transmitted. The death toll rose by two to 505.

Health Minister Park Neung-hoo announced at a briefing on Sunday the government’s decision to raise social distancing measures to level 2 in the Seoul Metropolitan area for two weeks, starting November 24.

For a third day in a row, more than 300 local transmissions have been reported daily -- with 200 from the Seoul metropolitan area.

Under level 2, mask wearing is mandatory in all indoor facilities, entertainment facilities like clubs are prohibited, restaurants can only do deliveries and takeouts after 9 p.m., gatherings will be limited to less than 100 people, and schools have to operate at one-third capacity.

Park warned that Korea is in a risky situation where a much larger mass infection could take place than in the first and second waves.

The UK's 10 p.m. curfew for hospitality will be moved to 11 p.m. local time, according to a government source.

On Monday, the Scientific Advisory Group for Emergencies (SAGE) is expected to publish documents showing the previous tier restrictions were not effective, the source said.

Prime Minister Boris Johnson is also expected to present his plan for tougher coronavirus restrictions to members of Parliament on Monday.

He has faced criticism over the 10 p.m. curfew from business owners and customers, some of whom have complained it created a rush outside establishments every evening.