“I don't like it to be any number,” she said. “Because you know, if you say it can be 10, and it's eight people from four different families, then that probably is not the same degree of safe as 10 people from your immediate household.”

Birx said she understood why the lack of uniformity in open and close spaces across the country can make social distancing messaging confusing for Americans.

“I worry about that,” she told CNN. “[People] say, ‘Well, bars and restaurants are open, then I can have 20 people over for Thanksgiving.’”

She also said Americans need to look at their choices when all this is over.

“Europe was willing to sacrifice restaurants and bars to maintain their schools. We ask college students to sacrifice their college experience … to change their behaviors, to wear a mask, to physically distance. We have 18 to 22-year-olds doing the right thing, and we're not willing to tell people that they really can't gather in public spaces or even indoors with their mask off,” she said.

Birx said it’s on every American to protect each other.

“I’m making the personal sacrifices not to infect my parents and my pregnant daughter, and there's a lot of people out there who know how to protect one another, and we just need to make sure we're all doing that.” 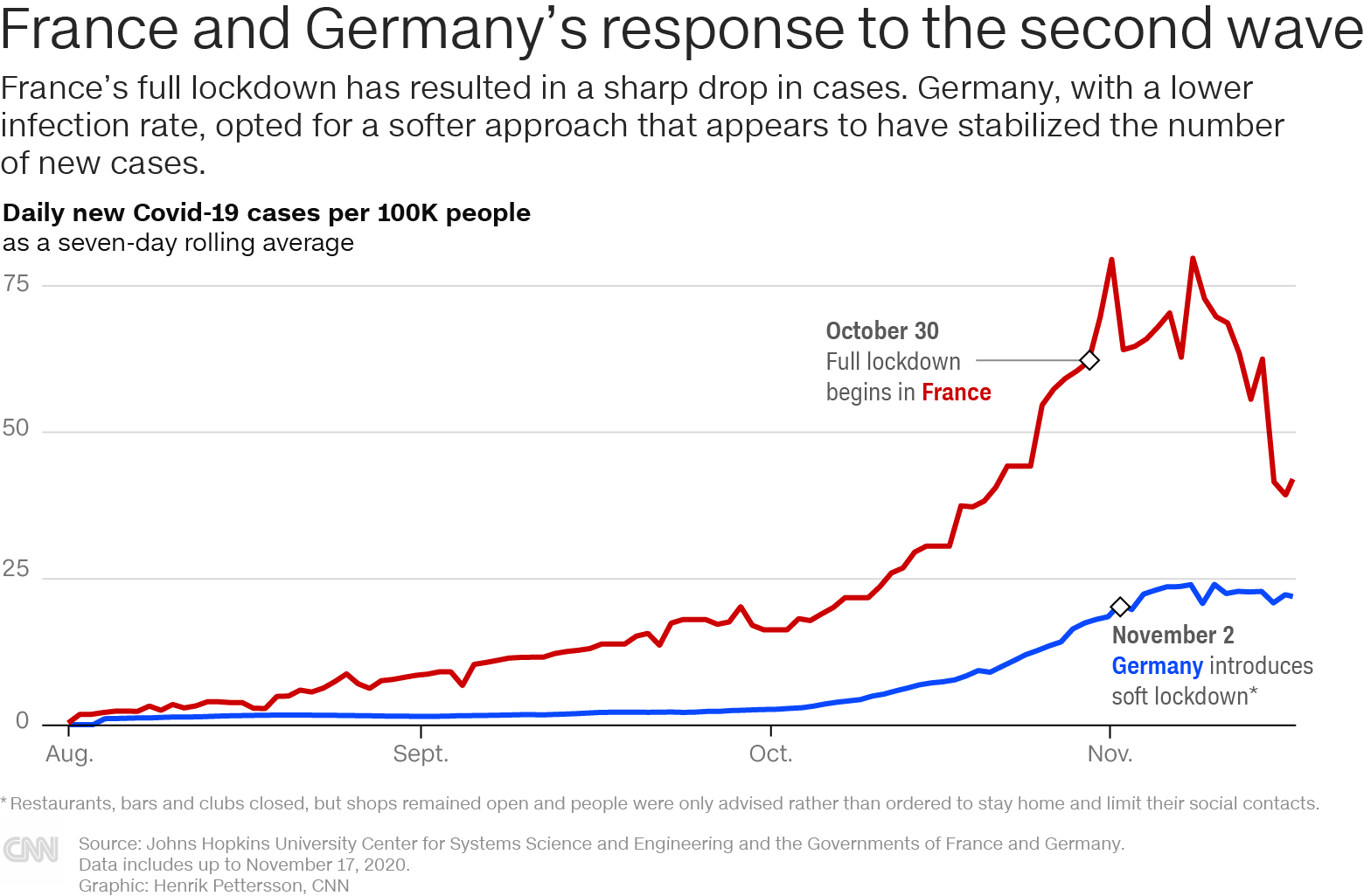 Covid-19 is spreading faster than ever before in the United States, with hospitals in some states running at capacity. The country is now in the same situation that France, Belgium and the Czech Republic were last month, when rapidly rising infections put their health care systems within weeks of failure.

But these countries have managed to avert, for now, the worst-case scenario, in which people die because hospitals are full and they can't access the care they need to survive. They slowed down the epidemics by imposing lockdowns and strict mask mandates.

Despite the clear evidence from Europe, the White House is still opposing new restrictions. "President Trump wanted me to make it clear that our task force, this administration and our President, does not support another national lockdown. And we do not support closing schools," Vice President Mike Pence said Thursday, at the first White House coronavirus task force briefing since July.

"They need to look at the European situation," said Mike Tildesley, an infectious disease modeling expert at the University Warwick and a UK government scientific adviser.

"And I mean, by no means what we have done in Europe is perfect, these governments are probably reacting a little bit slowly, but they are at least reacting, they are doing what they can to make sure that health services are not overwhelmed... and I think this is clearly what's needed in the US." 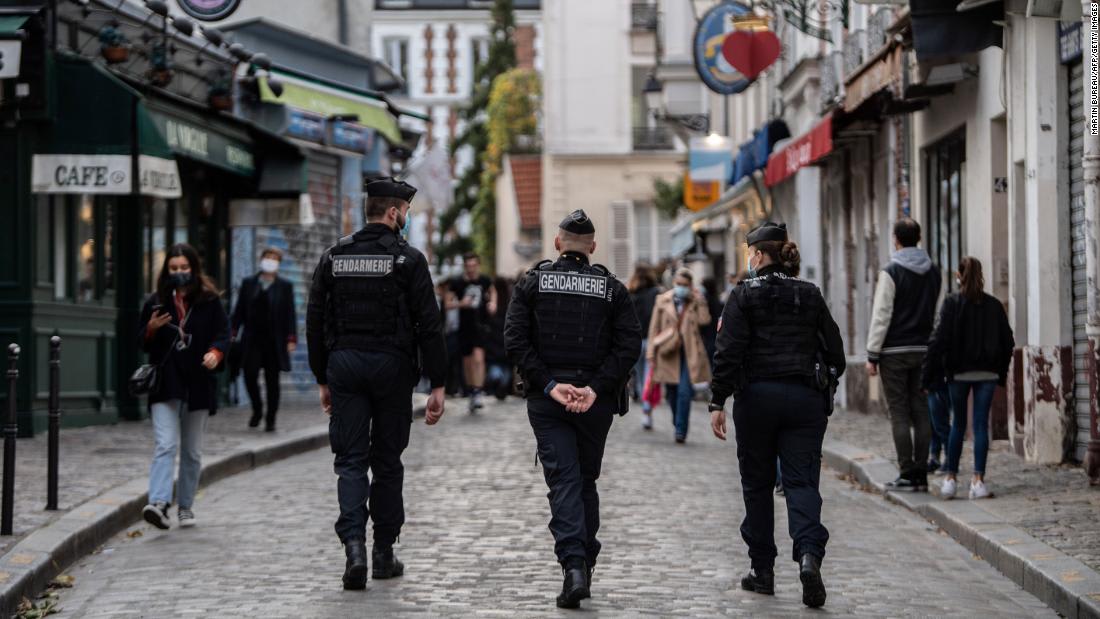 The US Centers for Disease Control and Prevention changed its guidance in late summer to focus on testing symptomatic people, which “put a pale on testing for a number of weeks,” White House coronavirus task force coordinator Dr. Deborah Birx says

“I can't tell you how strongly I believe that symptomatic testing and contact tracing is less than half of the equation. And unless you get the other half of the equation, you're not going to stop community spread. And so that did put a pale on testing for a number of weeks,” she told CNN.

Some background: On Aug. 24, the CDC website said: "If you have been in close contact (within 6 feet) of a person with a COVID-19 infection for at least 15 minutes but do not have symptoms, you do not necessarily need a test unless you are a vulnerable individual or your health care provider or State or local public health officials recommend you take one."

However, on in September, it updated its guidelines to stress that anyone who has been in contact with an infected person should be tested for coronavirus.

Birx has been a proponent of testing and says she believes “testing alone is a public health intervention.”

“If you constantly are testing people and isolating the positives, then you have a very different outcome. If you look at the universities that had mandatory testing, they ended up with less than 1% of their student body infected. Ones that did the testing the way we were doing it in America, primarily focused on symptomatics, contact tracing, isolating and quarantining, they had 8 to 10% of their student body infected,” she explained.

Her big worry is whether the messaging and communication went wrong. That is why, she says, she started to travel around the country to understand what people were “hearing when we were speaking” and improve dialogue and partnership to tackle the pandemic.

If you are just joining us, there's a lot going on in Europe. Here the latest:

"I must say that the news in recent days about a vaccine is very positive and we think that there will be vaccine approvals by December or at least at the very beginning of next year and then of course vaccinations can begin,” Merkel said.

But it's not all good news:

Pfizer and BioNTech said they will request an emergency use authorization for their coronavirus vaccine from the US Food and Drug Administration today.

This is the first coronavirus vaccine to seek a regulatory OK in the United States. The companies said in a statement that their vaccine candidate, known as BNT162b2, will potentially be available for use in high-risk populations in the United States by the middle to end of December.

“Filing in the US represents a critical milestone in our journey to deliver a COVID-19 vaccine to the world and we now have a more complete picture of both the efficacy and safety profile of our vaccine, giving us confidence in its potential,” Pfizer CEO Albert Bourla said in a statement.

The submission to the FDA is based on results from the Phase 3 clinical trial of Pfizer’s vaccine, which began in the United States on July 27 and enrolled more than 43,000 volunteers. The final analysis from the trial found the coronavirus vaccine was 95% effective in preventing infections, even in older adults, and caused no serious safety concerns, Pfizer and its German partner, BioNTech, announced this week. The submission also includes safety data on about 100 children ages 12 to 15.

Dr. Paul Offit, who is on FDA's vaccine advisory committee, explains how the approval process works:

A "very substantial" part of the Spanish population could be vaccinated in the first half of 2021, according to Spanish Prime Minister Pedro Sanchez.

His comments follow German Chancellor Angela Merkel's announcement that she expects a coronavirus vaccine to be approved in Europe in December, or "very soon after the turn of the year."

"Spain will be the first European country, together with Germany, to have a vaccination plan. We’ve been working since the month of September. We are ready,” Sanchez said.

The Prime Minister added that a large majority of the vaccines would be acquired through the European Union. The bloc has been moving towards coordinating the purchase and delivery of vaccines, to be shared equally among its member states, based on population numbers.

"The EU has already signed three contracts with pharmaceuticals. Our country would be entitled to 10% of contracted doses. We have a hopeful horizon," he said, adding that "any euphoria must be compensated by caution.”

The data shows that Moscow is the worst affected city, with 6,902 cases, which is also a new record. The center also reported the overall death toll to be 35,311.

A CNN investigation earlier this week, however, revealed that official Russian coronavirus death figures may be grossly understating the real toll by excluding people whose cause of death is attributable to other conditions. Most countries count a death from other conditions, such as pneumonia, as a Covid-19 death if the coronavirus infection triggered the person's deteriorating health.

Russian President Vladimir Putin admitted on Wednesday that the coronavirus situation in the country remains “challenging but controllable” and urged regional governors not to “conceal" the real scale of the problem.

The head of the Serbian Orthodox Church, Patriarch Irinej, died in a Belgrade hospital on Friday after contracting coronavirus, according to a statement by the church.

Serbian President Aleksandar Vučić confirmed the death on Instagram, posting a photo of Irinej with the caption: “I was honored to know you. People like you never depart.”

Irinej was admitted to hospital on November 4 after he tested positive for Covid-19. An earlier statement from the Serbian Orthodox Church said he was intubated after his condition deteriorated Thursday.

He had been at the funeral of the late Metropolitan of Montenegro and the Littoral, Amfilohije Radović, in Podgorica, Montenegro, on November 1, who also died of coronavirus-related ailments.

According to CNN affiliate N1 Serbia, Radović's body was in an open casket during the service before being interred in the crypt of the church. N1 reported that a large crowd gathered in front of the crowded church, with few of the people in the church and none of the priests wearing masks.

Born Miroslav Gavrilović on August 27, 1930, Irinej was enthroned as the spiritual leader of Eastern Orthodox Serbs in 2010.

Starting today, restaurants and bars in Sweden will no longer be able to serve alcohol after 10 p.m. local time.

The measure, announced last week, is an effort to tamp down a spike in coronavirus cases.

Sweden has now recorded more than four times as many Covid-19 deaths than its three Nordic neighbors combined -- 6,340 as of Thursday.

But the Swedish government has largely relied on recommendations, not rules, to promote social distancing measures and coronavirus restrictions.