Belgium reported a record 689 coronavirus hospital admissions on Tuesday, up from the previous high of 629 in March, according to the latest data from the Belgian health authority Sciensano.

On average, 421 Covid-19 patients were admitted to hospital daily over the past two weeks.

As of Tuesday, 5,554 coronavirus patients are in hospital, with 991 patients in intensive care, according to the latest health authority figures.

Sciensano noted that figures from the past seven days are subject to revision as there is a lag in receiving data from some regions and provinces.

The fall surge in the United States has ushered in daunting rates of Covid-19 spread, with 29 US states reporting at least one record high day of new cases since October began, according to data from Johns Hopkins University.

The record spread has brought the national total to more than 8.7 million infections and 226,723 deaths. And with this spike holding the potential to be the worst yet, experts warn that the impact of the virus will likely get worse.

"We're rising quickly. If we just go back about six, seven weeks ago to Labor Day, we were at about 35,000 cases a day," Dr. Ashish Jha, the dean of Brown University School of Public Health, said Tuesday. "We're above 70,000 and just heading up. I would not be surprised if we end up getting to 100,000."

The United States added 73,240 new cases Tuesday, and a record peak of more than 83,000 cases was reported on Friday.

The rise in cases has been closely followed by an increase in coronavirus deaths.

This month, 11 states reported their highest single day of new deaths since the pandemic began. And though researchers are racing toward a vaccine, health experts have cautioned that the public needs to take the virus seriously in the meantime.

If we continue our current behavior, by the time we start to go down the other side of the curve, a half a million people will be dead," CNN Medical Analyst Dr. Jonathan Reiner said Tuesday.

Under the current conditions, more than 2,000 people are predicted to die of the virus daily by January 1, according to the Institute for Health Metrics and Evaluation at the University of Washington. 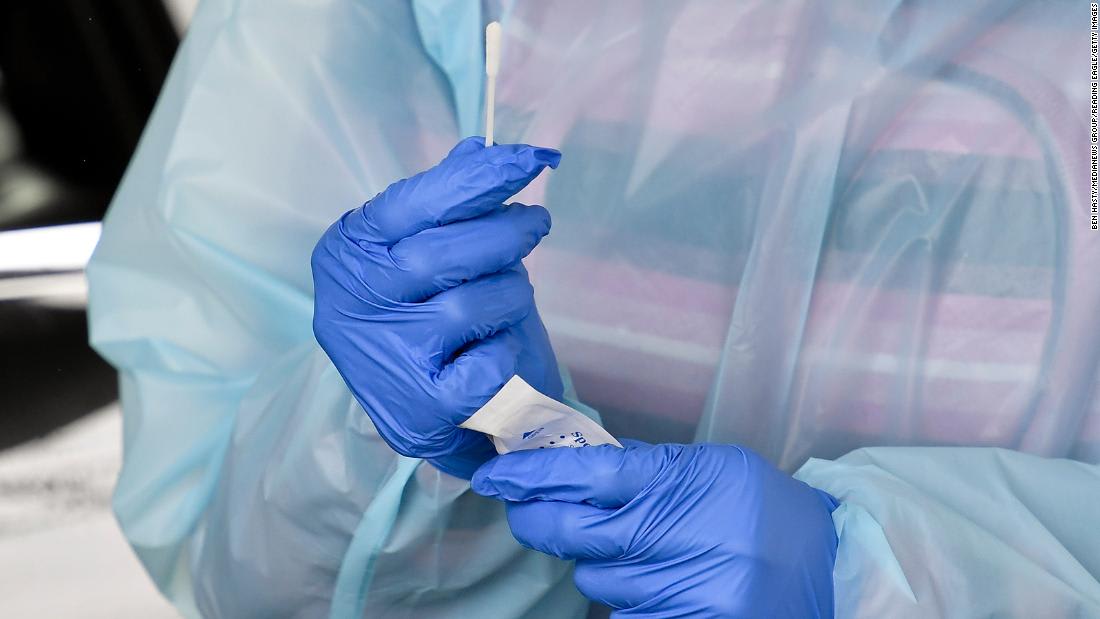 The Czech Republic reported a record 15,663 new coronavirus cases on Tuesday -- up more than 400 on the previous record set last Friday, according to data released Wednesday by the Ministry of Health.

The Czech Republic death toll now stands at 2,547, according to the ministry.

Despite new measures taken by the Czech government last week, the numbers of Covid-19 infections are growing. There are now 6,191 patients in hospital, 893 of them in a serious condition.

The government announced that students will not be returning to schools on Monday, November 2, as planned and that it will ask the Parliament to extend the state of emergency by one month, until December 3.

Europe is drowning in the second wave of the coronavirus epidemic. Infection rates are skyrocketing across the continent. Governments are imposing strict lockdowns. Economies are shutting down again. But there is a glimmer of hope: The virus, while still deadly, appears to be killing fewer people on average.

Recent case and fatality figures from the European Centre for Disease Prevention and Control show that while recorded Covid-19 cases are spiking in the United Kingdom, France, Spain, Germany and other European countries, deaths are not rising at the same rate.

"The fatality rate has declined, in the UK, we can see it going down from around June to a low point in August," said Jason Oke, a senior statistician at the Nuffield Department of Primary Care Health Sciences. "Our current estimate is that the infection fatality rate is going up a little bit, but it hasn't come up to anywhere near where we were and that's unlikely to change dramatically unless we see a really surprising increase in the numbers of deaths."

Oke has been tracking Covid-19 fatality rates along with his colleague Carl Heneghan of the Centre for Evidence-Based Medicine and health economist Daniel Howdon. Their research shows that, at the end of June, the fatality rate was just below 3% in the UK. By August, it had dropped as low as about 0.5%. It now stands at roughly 0.75%.

We think it's probably driven a lot by age, but also other factors, like treatment," Oke said.

The lower death rate isn't unique to Europe. In New York, the death rate for those hospitalized with coronavirus-related illnesses has also dropped since earlier this year, according to a study by a team of researchers at NYU Grossman School of Medicine, published in the Journal of Hospital Medicine. 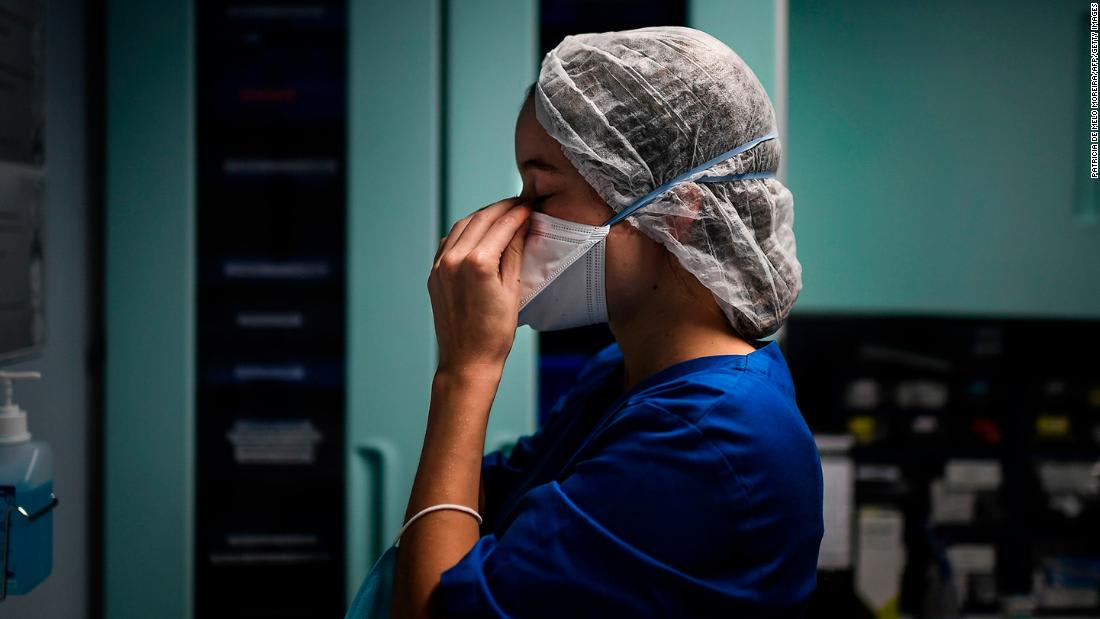 Why deaths aren't rising as fast in Covid-19's second wave, despite big spikes in new infections

That number breaks last Saturday's record of 14,714 cases, which was higher than usual because RKI updated their data to include cases from several days before. Germany's total coronavirus case count now stands at 449,275.

The German Interdisciplinary Association for Intensive Care and Emergency Medicine said the number of patients in intensive care rose exponentially, to five times higher than a week ago at 1,470.

Chancellor Angela Merkel is set to discuss further measures to contain the spread of coronavirus in the country on Wednesday afternoon in a meeting with the leaders of Germany's 16 states.

It's uncertain if the Los Angeles Dodgers will be able to fly home or have to go into quarantine after third baseman Justin Turner tested positive for the coronavirus, according to Andrew Friedman, the team's president of baseball operations.

“Not sure yet,” Friedman told reporters. “We’re going back tonight (to the hotel) and we’re going to all take tests and figure out what the results are from that and then go from there.”

The Dodgers defeated the Tampa Bay Rays 3-1 in Game 6 to win the best-of-seven series four games to two and claim the World Series in Arlington, Texas on Tuesday. Turner was removed during the game, but later returned to the field to celebrate with his teammates and the World Series trophy.

“I found out about it in the seventh inning,” Friedman said, answering a question about Turner testing positive. “It was extremely surreal and obviously my mind was somewhere else and then had to quickly adjust to what was happening. Obviously incredibly unfortunate but kind of speaks to what all of us are going through in 2020.
“And then the postgame, you know, I think having a mask on and staying socially distant, he wanted to come out and take a picture with the trophy -- which I can’t state strongly enough how big of a role he’s played in the success of this organization," he said.
“But I think for him just being a free agent not knowing how the future is going to play out, I don’t think there was anyone that was going to stop him from going out. From at least my perspective and not watching it super closely with everything going on, but I think he was mindful of other people, especially other people that he hadn’t already been in contact with.”

South African President Cyril Ramaphosa has gone into quarantine after a guest at a dinner he attended at the weekend tested positive for the novel coronavirus, according to the presidential office.

Ramaphosa's office released a statement on Wednesday saying that the “the President attended a fundraising dinner of the Adopt-a-School Foundation” on Saturday.

One of the dinner guests showed Covid-19 symptoms the following day and received a positive result on Tuesday, according to the statement.

“The President is showing no symptoms at this time and will, in line with COVID-19 health advice, be tested should symptoms manifest,” the statement said. “The President will perform his duties remotely and will observe the guidelines that apply to self-quarantine.”

South Africa has reported a total of 717,851 coronavirus cases and 19,053 deaths, according to Johns Hopkins University. The country's daily new cases peaked in July, with multiple days reporting more than 10,000 new infections, but have dropped since August.

Nearly half of the coronavirus cases reported in India on Tuesday were from five states where people had been celebrating local festivals, according to the Indian Health Ministry.

The Hindu festival Navaratri, or "Nine Nights," took place from October 17-25, culminating in the 10th day -- Dushera. The annual event marks the onset of a new harvest season and is followed by Diwali, the festival of lights, on November 14.

"During the festival, cases have risen in Kerala, West Bengal, Maharashtra, Karnataka and Delhi," Rajesh Bhushan, secretary to the Indian Ministry of Health and Family Welfare, said at a news conference on Tuesday.

Case for optimism? Despite the rise in cases in the five states, government-led think member VK Paul said that many people had followed Covid-19 guidelines during Navaratri, and given an overall fall in infections over the previous 24 hours, he was hopeful.

"We saw that during the festival season Indians listened to the Prime Minister and followed guidelines; this is a huge deal," Paul said.

The Ministry of Home Affairs on Tuesday announced that it would not reimpose restrictions, while malls, restaurants, gyms, movie theatres, schools and other educational institutions will remain open with guidelines for social distancing in place.

South Korea's capital, Seoul, will ramp up Covid-19 control measures ahead of Halloween to prevent cluster infections, a health official said on Wednesday.

In May, more than 250 cases were linked to nightlife venues in Seoul, according to the Korea Disease Control and Prevention Agency, causing authorities to temporarily shutter all clubs and bars shortly after.

The city is now taking precautions ahead of the holiday weekend. Park Yoo-mi, the city's director of public health, said it will conduct inspections on more than 150 businesses like clubs and bars from October 28 to November 3.

Businesses in violation of the city's Covid-19 measures will be banned for two weeks, Park said.

Though not an official holiday, Halloween has gained popularity among young people in South Korea in recent years, with many using the occasion to party in nightclubs.

South Korea reported 96 local cases in the past 24 hours, of which 61 were found in the Seoul metropolitan area. South Korea's total number of confirmed cases now stands at 26,146, with 461 deaths.