Coronavirus: latest news from around the world

Our live coverage has ended for the night. You can track the latest cases here.

US President Donald Trump's aide Hope Hicks, who tested positive for coronavirus, is likely to have been infectious for around three days, one doctor said Thursday.

Hicks was likely contagious with the virus as early as Monday, but without symptoms until Wednesday. And she was in close contact with several White House staff in close quarters, said Dr. Jonathan Reiner, a CNN medical analyst and cardiologist at George Washington Medical Center.

Hicks rode on Marine One -- in this case a small helicopter -- with the President and other staffers, too. “Everyone on that aircraft has been exposed to the virus, we know that with clarity," Reiner said.

Guidelines from the US Centers for Disease Control and Prevention and Trump’s own coronavirus task force are very clear when it comes to exposure to the virus. Anyone exposed should quarantine for 14 days.

“Testing negative today, which I hope he is negative today, doesn't mean he'll be negative tomorrow or the day after. The incubation period for this virus is anywhere between five and 14 days,” Reiner said.

That means no rallies. “The President's trips should be canceled,” Reiner said.

The incubation period for the virus is anywhere between five and 14 days, according to the CDC. Trump may not know if he has the virus for another two or three days.

US President Donald Trump said that both he and First Lady Melania Trump will begin their “quarantine process” until they get their coronavirus test results, following news that his top aide Hope Hicks tested positive for the virus.

“Hope Hicks, who has been working so hard without even taking a small break, has just tested positive for Covid 19. Terrible! The First Lady and I are waiting for our test results. In the meantime, we will begin our quarantine process!” Trump tweeted Thursday night.

Hicks traveled with the President multiple times this week, including to the presidential debate in Cleveland and a campaign rally in Minnesota on Wednesday.

US President Donald Trump confirmed that his top aide Hope Hicks has tested positive for coronavirus and said he and First Lady Melania Trump took a test Thursday evening.

Trump said he doesn't know whether he has contracted the virus, saying he spends “a lot of time with" Hicks but noted she wears a “lot of masks.”

“She did test positive, I just heard about this. She tested positive. She’s a hard worker, lot of masks, she wears masks a lot but she tested positive," the President said. during a call-in appearance on Fox News’ “Hannity.”

He added, “I just went for a test and we’ll see what happens, I mean, who knows… I spent a lot of time with Hope and so does the First Lady, and she's tremendous.”

Trump speculated that Hicks could have contracted the virus from an interaction with a supporter.

“She’s a very warm person. She has a hard time, when soldiers and law enforcement comes up to her, you know, she wants to treat them great, not say, ‘Stay away, I can't get near you.’ It's a very, very tough disease,” he said.

Trump said he wasn't sure when he would get the test results back, but indicated it would most likely be tonight or tomorrow morning.

Hicks' positive test marks the fifth known White House coronavirus case and the closest to the President since the pandemic began.

She traveled with the President multiple times recently, including to the debate in Cleveland on Tuesday, and was seen boarding Marine One, along with several other of the President's closest aides -- Jared Kushner, Dan Scavino and Nicholas Luna -- none of whom wore masks, on Wednesday as Trump was heading to a campaign rally in Minnesota.

She traveled with the President multiple times recently, including to the debate in Cleveland on Tuesday, and was seen boarding Marine One on Wednesday as Trump was heading to a campaign rally in Minnesota.

"The President takes the health and safety of himself and everyone who works in support of him and the American people very seriously," White House spokesman Judd Deere told CNN in a statement when asked about the level of contact between Hicks and Trump.

The White House made no mention of Hicks by name, nor did it confirm she had tested positive.

"White House Operations collaborates with the Physician to the President and the White House Military Office to ensure all plans and procedures incorporate current CDC guidance and best practices for limiting COVID-19 exposure to the greatest extent possible both on complex and when the President is traveling," Deere added.

Some White House staffers who were in close proximity were notified of the positive test result today, one official said.

This development was first reported by Bloomberg News. 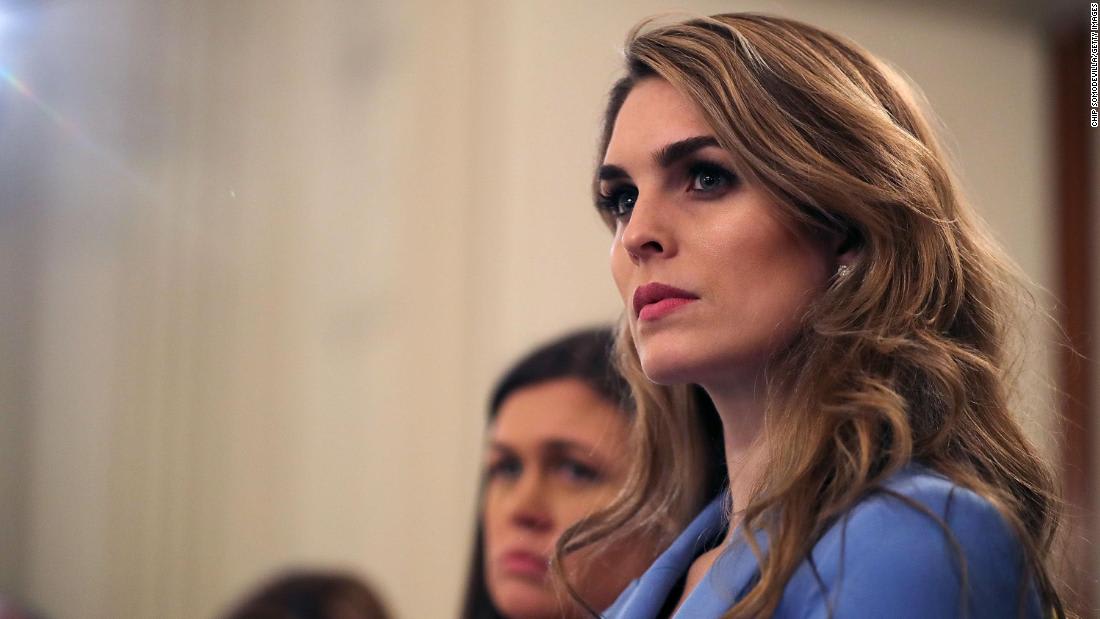 The House of Representatives on Thursday approved a $2.2 trillion coronavirus stimulus proposal put forward by House Democrats with no bipartisan deal in sight even as House Speaker Nancy Pelosi and Treasury Secretary Steven Mnuchin have continued talks in an effort to reach an agreement.

The measure passed largely along party lines amid GOP opposition with a final tally of 214-207.

Eighteen Democrats crossed party lines to vote against the bill, while Republicans were united in opposition.

The legislation will give Democrats something to point to as lawmakers face pressure from constituents to deliver more aid as the pandemic continues to take a devastating toll across America. But the Democratic plan has been rejected by Republicans as too costly and is not expected to be taken up by the GOP-led Senate, and time is quickly running out to clinch a bipartisan agreement that could be signed into law ahead of the November elections.

Pelosi, as she walked off the House floor, told a group of reporters Thursday evening ahead of the vote that there will be no agreement on any stimulus deal tonight, but talks with Mnuchin will continue.

Some context: Both the White House and House Democratic leaders are struggling with internal party divisions over how to move forward in the stimulus talks.

For months, moderate Democrats in the House have been pushing their leadership to go back to the table and get a deal with the White House on stimulus rather than forging ahead with another Democratic-only package.

Fourteen Democratic members voted against the original Heroes Act back in the spring, arguing it was not a plan that was going to be signed by the President. The legislation voted on Thursday has been referred to by House Democrats as an updated version of the Heroes Act.

The country recorded at least 2,548 new cases of Covid-19 on Thursday, bringing the total number of infections to 317,409.

The number of people that have died from coronavirus is at least 35,918 – an additional 24 fatalities were recorded in the past 24 hours. The number of patients admitted to intensive care has also risen by 11, bringing the total to at least 291.

Loss of smell and taste are a strong sign that someone is infected with the coronavirus that causes Covid-19 -- and in some cases it may occur without the other symptoms of cough or fever, according to new research published Thursday.

The researchers, based in the United Kingdom, wrote in their study that people who lose either smell or taste should consider self-isolating, even if they have no other symptoms.

"Our findings show that loss of smell and taste is a highly reliable indicator that someone is likely to have Covid-19 and if we are to reduce the spread of this pandemic, it should now be considered by governments globally as a criterion for self-isolation, testing and contact tracing," Rachel Batterham, of University College London and University College London Hospitals, who helped lead the study team, said in a news release on Thursday.

The team studied 590 volunteers who experienced a new loss of smell or taste, and they tested 567 of them for Covid-19.

Among those 567 people who were tested, 77.6% tested positive for Covid-19 antibodies. In total, 80.4% of participants reporting smell loss and 77.8% of those reporting taste loss had a positive test result, the researchers reported in the journal PLOS Medicine.

About 40% of those who tested positive for antibodies had neither a fever nor a cough.

Loss of smell could be a 'highly reliable indicator' of Covid-19, research says