Israel has announced a significant tightening of restrictions during its second general lockdown, as numbers of new coronavirus cases continue to rise, including strict limits on protests and prayer groups and a wider closure of places of work.

The new rules follow hours of debate in Israel’s coronavirus cabinet over recent days, during which senior lawmakers struggled to present a unified front in agreeing a master plan to combat the pandemic.

“In order to save the lives of Israeli citizens, it is incumbent upon us now to impose a full closure for two weeks - from this Friday until the end of Simchat Torah,” said Prime Minister Benjamin Netanyahu at the beginning of the cabinet meeting, referring to the conclusion of the current holiday period.
“Afterwards, we will have an additional two weeks of closure, I hope with fewer restrictions, but … this depends upon the infection rates. The goal is to reduce the infection rate, and … to save many Israeli lives.” Netanyahu said.

The Deputy Director-General of the Health Ministry, Itamar Grotto, expressed opposition to the announcement, telling Israeli Radio there was no need to impose a sweeping closure on workplaces to reduce the infection rate. But Grotto, who participated in the cabinet meeting, said it was the government’s decision.

The tougher restrictions include: a general closure of businesses and workplaces, apart from those deemed necessary and essential services, such as food stores and pharmacies, which will remain open. Open-air markets will be closed.

Prayer and protest will be allowed only in open spaces within 1 km (0.6 miles) of home and with a limit of 20 people. However, synagogues will be allowed to open with certain restrictions on the upcoming one-day holiday of Yom Kippur, raising concerns that infections could increase if worshippers don’t abide by the regulations.

Public transportation will operate on a limited basis. A decision has not yet been made on whether to close Ben Gurion International Airport outside Tel Aviv.

The new restrictions still require approval from the Knesset, which is expected later Thursday.

New cases: On Wednesday, Israel recorded 6,808 new coronavirus cases, according to the Ministry of Health, after a new daily high of 6,861 cases were recorded a day earlier. A total of 1,335 people have died in Israel as a result of coronavirus.

Germany's Economy Minister Peter Altmaier has gone into coronavirus quarantine -- the country’s second cabinet member to do so.

Altmaier posted on Twitter on Wednesday night that he would stay home after coming into contact with “an employee of an EU minister present at the Trade Council in Berlin who tested positive for Corona.”

He went on to say: “As a precaution, I have put myself in domestic quarantine. I was tested negative on Friday, I am doing very well.”

Earlier Wednesday, Germany's Foreign Minister Heiko Maas announced that he quarantined himself after one of his bodyguards tested positive for coronavirus, forcing Maas to cancel a planned trip to Jordan.

Germany's number of confirmed coronavirus cases rose by 2,143 to 278,070 within the past 24 hours, according to data from the country's infectious disease agency, the Robert Koch Institute.

The British government is exploring the possibility of clinical trials in which volunteers are deliberately exposed to coronavirus to test the effectiveness of vaccine candidates, the UK Department for Business, Energy, and Industrial Strategy (BEIS) revealed Wednesday in a statement.

"We are working with partners to understand how we might collaborate on the potential development of a COVID-19 vaccine through human challenge studies," a government spokesperson said.
"These discussions are part of our work to research ways of treating, limiting and hopefully preventing the virus so we can end the pandemic sooner," the spokesperson added.

In so-called "challenge trials," researchers give study subjects an experimental vaccine and then intentionally expose them to coronavirus to see if the vaccine works. Such trials were used in early research with smallpox, yellow fever and malaria.

However, deliberately infecting study participants poses more risks and raises ethical concerns, compared to randomized controlled trials, where study subjects receive a vaccine or a placebo, and researchers monitor to see if they become ill as they go about their daily lives.

The World Health Organization issued guidance in May saying challenge studies can be "substantially faster" and more effective than other methods, in part because fewer participants need to be exposed to experimental vaccines and because they can be used to compare potential vaccines.

It also said controlled infection trials could be ethically acceptable if they met certain criteria. These include choosing young and healthy adults as participants, starting with low doses, ensuring public engagement, and providing high-quality care and close monitoring.

But in July, members of the US National Institutes of Health "Accelerating Covid-19 Therapeutic Interventions and Vaccines" (ACTIV) Working Group said such trials would not hasten development of a vaccine. 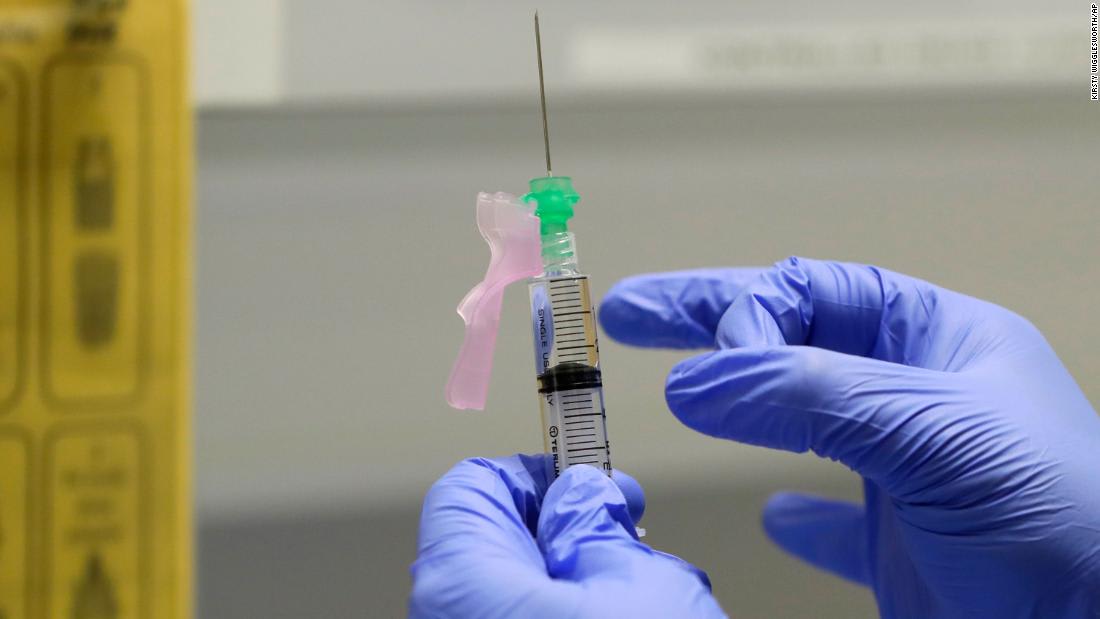 UK Health Secretary Matt Hancock says it’s estimated that fewer than 10,000 people per day are currently being infected with coronavirus, lower than during the first wave which struck the country earlier this year.

The United Kingdom reported 6,178 new daily cases of Covid-19 on Wednesday -- which is a similar number to the peak of the first wave of infections. The difference, Hancock says, is that there is significantly more testing being carried out now.

According to a tally by Johns Hopkins University, more than 412,000 cases of coronavirus have been detected in the UK so far, putting it among the worst hit European countries, behind France and Spain. Almost 42,000 people have died as a result of the virus in the UK.

Event organizers for the annual Times Square New Year's Eve celebration announced that the countdown will take place this year, albeit with some changes in format.

The countdown to midnight on December 31 -- which is just 100 days away -- will take place "visually, virtually and safely," according to a video teaser organizers sent out as part of a release.

"One thing that will never change is the ticking of time and the arrival of a New Year at midnight on December 31st," said Tim Tompkins, president of the Times Square Alliance, in a release. "But this year there will be significantly new and enhanced virtual, visual and digital offerings to complement whatever limited live entertainment or experiences -- still in development -- will take place in Times Square."

Jeff Straus, the president of Countdown Entertainment, which co-produces the event, said part of the event is to forget about the strain 2020 has taken on society.

"We will miss everyone this year but we will bring our celebration to you, whether you want to turn off and turn away from the bad news of 2020, or turn to the new year with a sense of hope, renewal and resolution, you'll be able to join us virtually like never before as part of the Times Square 2021 celebration," he said in the release. 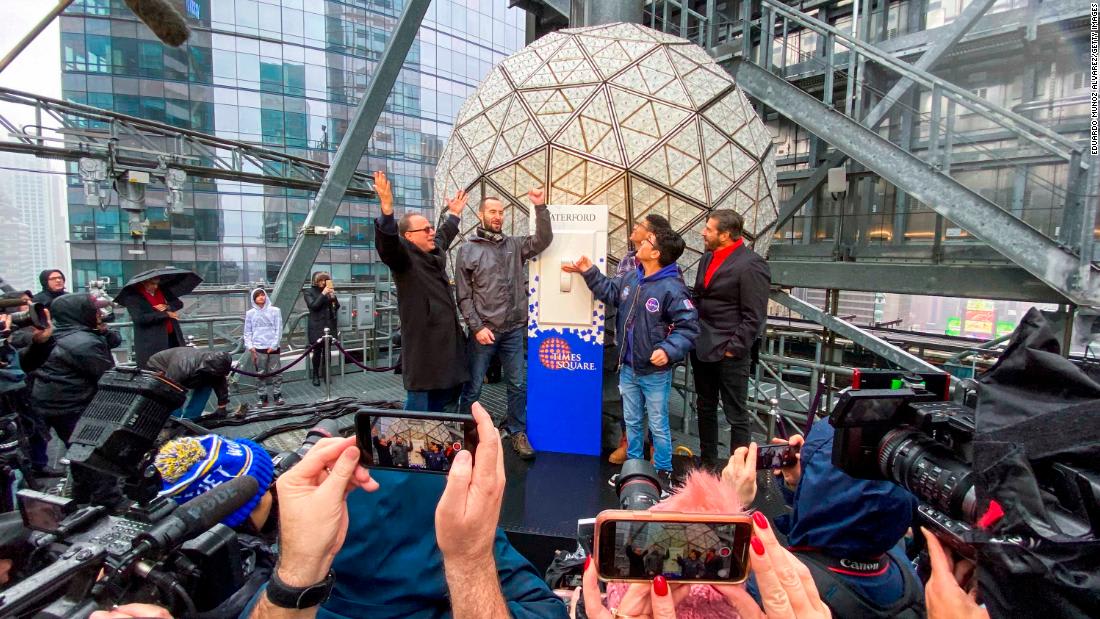 “The resumption of this service is within the framework of easing restrictions and strengthening the state’s efforts towards supporting recovery plans of the country’s tourism sector and economy,” the UAE's Federal Authority for Identity and Citizenship said in a statement.

It added that the decision also follows the precautionary measures undertaken by the travel industry to reduce the spread of Covid-19.

The decision to suspend the issuance of visas was put in place in March, with the exception of diplomatic passport holders, as part of the country's efforts to combat the spread of the virus, according to WAM.

An additional 37,330 coronavirus infections and 1,098 new virus-related fatalities were recorded in the United States on Wednesday, according to Johns Hopkins University.

The UK government has launched a contact tracing app for smartphones which it says will help control the spread of coronavirus.

“We are at a tipping point in our efforts to control the spread of this virus. With infection rates rising we must use every tool at our disposal to prevent transmission, including the latest technology,” UK Health Secretary Matt Hancock said in a statement.
“Today’s launch marks an important step forward in our fight against this invisible killer and I urge everyone who can to download and use the app to protect themselves and their loved ones.”

The app will be available for download for people over 16 in England and Wales.

To promote its use, the government will also launch an advertising campaign with the strapline "Protect your loved ones. Get the app."

“Every single person who downloads the app is helping to improve how it can keep us safe,” Hancock told Sky News.

“The more people who download it, the more effective it will be.”

Indian Prime Minister Narendra Modi called for a reduction in local lockdowns in order to help the wider economy during an online meeting with state leaders on Wednesday.

In India, state governments are empowered to go beyond the restrictions issued by the federal government and as cases have continued to stack up across various parts of the country, chief ministers have announced partial lockdowns.

Local police in the city of Mumbai announced a partial lockdown last week, with movement in containment zones -- sections of the city identified as coronavirus hotspots -- prohibited except for essential activities.

“We should focus on micro-containment zones which will help in reducing the spread of coronavirus and allow life and activity to continue normally," he said. "These one- to two-day-long local lockdowns and their effectiveness should be surveyed by each state. It should not hamper the restarting of economic activity in your states."

India has recorded over 5.7 million Covid-19 cases, including 91,149 deaths since the start of the pandemic, the worst-hit country after the United States.