The US Centers for Disease Control and Prevention guideline change Monday about aerosolized transmission of coronavirus was not the result of political pressure, according to a federal official familiar with the situation.

“This was totally the CDC’s doing,” the official said. “It was posted by mistake. It wasn’t ready to be posted.”

The official said the guideline change was published without first being thoroughly reviewed by CDC experts.

“Somebody hit the button and shouldn’t have,” the official said.

The official added that the guidance is “getting revised,” but didn’t say when the revision would be posted to the CDC’s website.

What the guidance says: The guidance pertains to the way the novel coronavirus is spread. While it’s known it can spread by droplets directly between people standing less than 6 feet apart, there’s been some debate about whether the virus can suspend in aerosolized particles in the air and transmit to people further than 6 feet away.

The agency tried to further clarity what it meant by aerosol transmission, the official said.

“It can occur, but it’s not the way the virus is primarily being transmitted,” the official said.

But in the effort to say that, it was written in such a way “that it’s being understood to mean it’s more transmissible than we thought, which is not the case.”

The source said the guidance that was posted by mistake on Friday wasn’t noticed over the weekend, and CDC became aware of it Monday through reporters’ calls.

A couple married for 48 years, and together for over 50, died of coronavirus only minutes apart holding hands.

Johnny Lee Peoples, 67, and his wife Cathy "Darlene" Peoples, 65, started feeling symptoms at the beginning of August, but would not make it to see more than two days of September.

"The message our family would like to convey is that Covid is real. It's not a hoax or a joke. Our parents took the proper precautions but tragically still contracted the virus."

Britain should upgrade its Covid-19 alert level to the second highest, level four, meaning the virus is “in general circulation, transmission is high or rising exponentially," the chief medical officers of all four nations recommended on Monday.

“The CMOs for England, Scotland, Wales and Northern Ireland have reviewed the evidence and recommend all four nations of the UK should move to Level 4," they said in a statement from the department of Health.

“After a period of lower COVID cases and deaths, the number of cases are now rising rapidly and probably exponentially in significant parts of all four nations. If we are to avoid significant excess deaths and exceptional pressure in the NHS and other health services over the autumn and winter everyone has to follow the social distancing guidance, wear face coverings correctly and wash their hands regularly. We know this will be a concerning news for many people; please follow the rules, look after each other and together we will get through this.”

New restrictions are expected to be imposed with the move to a stage four alert. A stage five alert calls for a full lockdown. British Prime Minister Boris Johnson is expected to make a statement on the next steps on Tuesday.

The US Centers for Disease Control and Prevention on Monday abruptly reverted to its previous guidance about how coronavirus is transmitted, removing references to airborne transmission it had posted just days earlier.

“A draft version of proposed changes to these recommendations was posted in error to the agency’s official website. CDC is currently updating its recommendations regarding airborne transmission of SARS-CoV-2 (the virus that causes COVID-19). Once this process has been completed, the update language will be posted,” Jason McDonald, a CDC spokesperson, said in a response emailed to CNN.

The guidance had been quietly updated on Friday, according to the CDC’s website. On Sunday, CNN was the first to report the change. The CDC responded to CNN just before noon on Monday to say it was reverting to the previous guidance.

Despite several studies that have shown the novel coronavirus can spread through small particles in the air, the CDC page now says that Covid-19 is thought to spread mainly between people in close contact – about six feet – and “through respiratory droplets produced when an infected person coughs, sneezes or talks” – the same language it posted months ago.

About the Friday change: In language posted Friday and now removed, CDC said Covid-19 most commonly spread between people who are in close contact with one another, and went on to say it’s known to spread “through respiratory droplets or small particles, such as those in aerosols, produced when an infected person coughs, sneezes, sings, talks or breathes.”

These particles can cause infection when “inhaled into the nose, mouth, airways, and lungs,” the agency said. “This is thought to be the main way the virus spreads.”

“There is growing evidence that droplets and airborne particles can remain suspended in the air and be breathed in by others, and travel distances beyond 6 feet (for example, during choir practice, in restaurants, or in fitness classes),” the page said in the Friday update, which has since been removed. “In general, indoor environments without good ventilation increase this risk.

In the Friday update, the CDC had added new measures to protect yourself in others, including recommendations to use air purifiers to reduce airborne germs in indoors spaces and clear guidance to “stay at least 6 feet away from others, whenever possible.”

The updated CDC page had also changed language around asymptomatic transmission, shifting from saying “some people without symptoms may be able to spread the virus” to saying “people who are infected but do not show symptoms can spread the virus to others.

Also on Friday, CDC updated its coronavirus testing guidance to stress that anyone who has been in contact with an infected person should be tested for coronavirus. A controversial earlier update was not written by CDC scientists and posted online before it had undergone the normal scientific review process, two sources confirmed to CNN last week.

CNN reported last week that US Health and Human Services communications officials appointed by President Trump had recently pushed to change language of weekly science reports released by the CDC so as not to undermine Trump's political message, according to a federal health official. Officials within HHS had defended the demand, saying the CDC fell under the agency's umbrella and that all communications and public documents needed to be cleared at the top, and CDC Director Dr. Robert Redfield has said “at no time has the scientific integrity” of these reports been compromised.

Moncef Slaoui, head of the US government's effort to develop a vaccine against Covid-19, said that “we are pretty close” to having a vaccine for Covid-19.

“We are pretty close,” Slaoui said on CNBC Monday. “In fact, we are – this is an unprecedented program.”

In the United States, there are three vaccines in phase three trials, and a fourth one is scheduled to start imminently, Slaoui said. Two of the phase three trials in the US have almost fully recruited the numbers laid out in their original plans.

“Really, the readout of these phase three trials is 50% of the answer to the question. When we read out efficacy, that is going to happen somewhere between October and December, January. The longer we wait, the more likely,” he said.

The reason it isn’t known and can’t be predicted is because it depends on the number of cases in the study, he said.

The other 50% of what is really important to define when the vaccine will be available is manufacturing and availability of vaccine doses, he said – something which Slaoui said is also progressing well.

The US is investing in up to 25 different manufacturing facilities in the United States to help manufacture the six vaccines that are being supported by Operation Warp Speed. Small numbers of the vaccine doses are already being stockpiled that will be readily available in November and December.

“If approval is granted around that time – or authorization – we may be able, for instance, to immunize the most susceptible populations in the US by December of 2020,” he said. “Most of the elderly population and first line workers in January of 2021, and the rest of the US population progressively in the month of February, March and April.”

Last week, The World Health Organization warned that coronavirus cases are surging alarmingly in Europe, with infections spiking to new highs. Many European governments imposted strict local measures in response and began weighing further lockdowns in a bid to halt a second wave of the pandemic.

Here's what we know about where the pandemic and new restrictions stand this week:

Maryland reported a record low positivity rate on Sunday of 1.89%, and state officials encouraged the public to continue to be tested to keep cases under control. Many health experts say widespread testing is key to finding asymptomatic or pre-symptomatic carriers, so those people can isolate and prevent the virus' spread.

"We are working every day. We do have a formula to reduce the deaths, reduce the cases, but we all have to be disciplined and diligent to make sure we obey that every single day," he said.

In response to the impending harrowing milestone of 200,000 coronavirus deaths, Giroir said "every death is a tragedy" and the task force is working every day to bring them down.

Meanwhile, an updated CDC guidance from the US Centers for Disease Control and Prevention says the coronavirus can be commonly spread through viral particles in the air.

The guidance previously said Covid-19 was mainly thought to spread between people within 6 feet of one another and through respiratory droplets "produced when an infected person coughs, sneezes or talks."

As the US approaches the grim milestone of 200,000 coronavirus deaths, more than half of states are reporting a rise in cases — and only six are seeing a decline in cases.

Wisconsin, Idaho, South Dakota, Iowa and Kansas are among the states reporting more new cases in the last seven days, along with a coronavirus positivity rate above 15%.

The test positivity rate is the percentage of all tests given that come back positive for coronavirus.

Here's a look at where states stand: 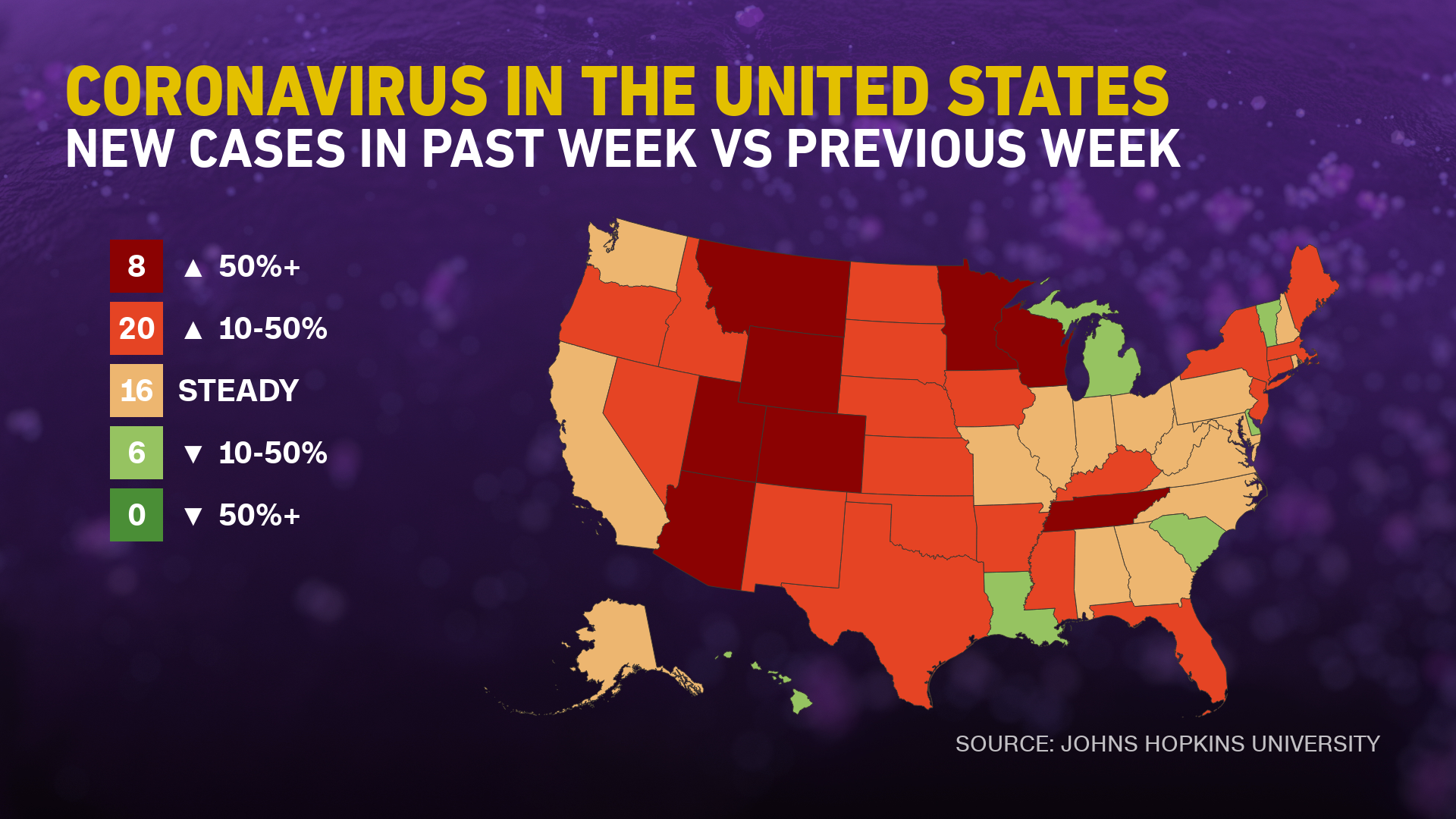 President Trump once again gave himself an A+ in his handling of the coronavirus pandemic, despite the death toll in the United States expected to hit 200,000 Monday.

This weekend CNN obtained audio recordings from a conversation Bob Woodward had with Trump in July in which Trump gave himself an A on his handling of the pandemic.

Trump then claimed that if democratic presidential candidate Joe Biden was in charge he would have “ran this like he did the swine flu” and “2 to 2.5 million people would die.”

Meanwhile, here's a look at the latest on the pandemic in the US: