Nearly 30 US states are reporting downward trends in Covid-19 cases, but the pandemic will likely worsen again, according to the country's leading infectious disease expert.

"We need to hunker down and get through this fall and winter because it's not going to be easy," Dr. Anthony Fauci said Thursday.

The warning isn't new: Experts -- including the US Centers for Disease Control and Prevention director -- have for long warned the months ahead will be challenging. It doesn't help that the US continues to see about 36,000 new cases each day -- which is better than where we were in August, but still too high, according to Fauci.

There's a lot that could potentially help drive Covid-19 numbers up as the fall season arrives:

Jenifer Johnston, a 40-year-old Oregon mother who has been battling coronavirus for six months, has been in the hospital multiple times after experiencing symptoms including extremely high blood pressure, trouble standing and loss of memory.

“I can only stand for a few minutes at a time. I turn purple, my hands and legs, and I get lightheaded,” she said on CNN’s “New Day.”
“My heart rate doubles just standing, and I have blurry eyes. I feel like I'm going to faint, in and out, most days … I can't watch TV or read, and my memory's gone,” she added.

Johnston said she tries not to go to the emergency room, “otherwise I’d be there every night,” but last weekend, her symptoms got so bad for days that she had to call a doctor.

“At night, I wake up and I gasp for air pretty often, and my whole left side goes numb, my blood pressure skyrockets to really scary ranges and my heart rate gets to like 180, which is really fast,” she said.

Doctors seem flummoxed by her situation, she said, and are treating her symptom-by-symptom. She’s on heart medication and multiple vitamins to try to help.

Executives at America's largest bank are calling its senior managers back into the office after months of remote work, according to a person familiar with the plans.

JPMorgan Chase conducted calls with senior managers in its sales and trading unit in London and New York Wednesday, the person said. Those managers have been asked to return to the offices starting Sept. 21, with some exemptions allowed.

Employees will not be asked to come in if they are high-risk, live with someone who is high-risk or have issues coordinating child care or homeschooling, this person said.

JPMorgan Chase CEO Jamie Dimon and most of the firm's operating committee have been in the office for most of the summer, the person said.

The decision to call senior managers back was important for training, the person said, especially with a new analyst class joining the company.

Used car sales are booming so much they pushed up consumer price inflation last month. Prices for used cars and trucks climbed 5.4%, the largest monthly increase since March 1969, and contributed 40% to the core inflation index, which strips out items that tend to be volatile in price, like food and energy.

"The categories with the highest increases tell the tale of today's economy," Robert Frick, corporate economist with Navy Federal Credit Union, said. "The demand for these is stiff given the high expense of new cars, and that people are closely watching their spending while the economy is depressed by the pandemic."

People are also abandoning air travel during the pandemic and hitting the road after being cooped up at home for much of the spring and summer. And it doesn't hurt that gas prices in the US cheaper than they've been in years.

US core consumer prices rose 0.4% in August on a seasonally adjusted basis, less than the 0.6% increase in July,

Over the past 12 months, the index increased 1.3% before seasonal adjustments. That's a significant jump, as back in May the 12-month increase was only 0.1% after prices got clobbered during the spring lockdown.

The coronavirus reproduction rate, or R-number, in the UK has risen to above 1.0, the country’s Government Office for Science said Friday, indicating the number of cases is growing.

Here's what that means: “An R-number between 1.0 and 1.2 means that on average every 10 people infected will infect between 10 and 12 other people,” the office said.

The R-number is highest in London and in the northwest of England.

Demetria Bannister, a 28-year-old elementary school teacher in Columbia, South Carolina, was diagnosed with coronavirus last Friday and died Monday from Covid-19 complications, a week into the start of the school year there, CNN affiliate WIS reported.

Bannister had taught at the Windsor Elementary School for five years, WIS reported. She started her third year of teaching third-grade students virtually on Aug. 31.

Patricio Aravena, her friend and coworker, spoke to CNN about Bannister's impact as a teacher and person.

An ensemble forecast from the US Centers for Disease Control and Prevention now projects there will be 205,000 to 217,000 coronavirus deaths in the United States by Oct. 3.

More than 191,800 people have already died from Covid-19 in the US, according to data compiled by Johns Hopkins University. That means the new forecast projects between approximately 13,000 and 25,000 more people could die in the next three weeks.

About the forecast: Unlike some individual models, the CDC’s ensemble forecast only offers projections a few weeks into the future.

The previous ensemble forecast, published September 3, projected up to 211,000 coronavirus deaths by September 26.

When an elderly resident at an assisted living facility in Texas returned from the hospital after a surgery, she needed round-the-clock care -- and the management put six workers on the case.

Among them were Monica Montgomery and her daughter Nya Patton.

It turns out the elderly resident had tested positive for Covid-19 at the hospital during her stay in early April, according to court records. Four of the six workers, the records say, later also tested positive -- including both Montgomery and Patton, who was pregnant.

Patton recovered, but Montgomery, 44, died on May 10 -- Mother's Day. She never met her first grandson, who was born in August.

Her family has filed a wrongful death suit against the assisted living facility, charging not only that the six workers didn't know about the resident's infection, but also that the management was aware of it and neglected to tell the workers -- allegations the owner of the company vehemently denies.

As the coronavirus continues its assault on the United States, throwing all aspects of everyday life into upheaval, the courts offer a lens into how treacherous things have gotten in one of those arenas -- the American workplace.

Trump ridiculously invoked former British Prime Minister Winston Churchill and former President Franklin Delano Roosevelt at a Thursday night rally, claiming that like them, he had tried hard to calm public panic in a dark hour.

It was a historically illiterate gambit, since unlike Trump in the pandemic, both statesmen leveled with their people about grave national crises.

But it reflected his struggle to explain his failure to tell the American people the truth about the seriousness of the virus -- even though he told Bob Woodward in interviews for his new book in February that it was "deadly stuff."

In a low-energy news conference earlier in the day, Trump doubled down on falsehood, declaring that "I did not lie" when he warned Woodward the pathogen was worse than the flu while publicly comparing it to the seasonal illness.

In one stunning moment, he said that if the Washington Post reporter, whose book "Rage" comes out Tuesday, was so concerned about what was said in their taped conversations, he should have gone to the "authorities" so they could prepare the country. Of course, under the Constitution, the President is the ultimate authority and whether Trump likes it, the buck stops with him for the pandemic and every other national crisis. 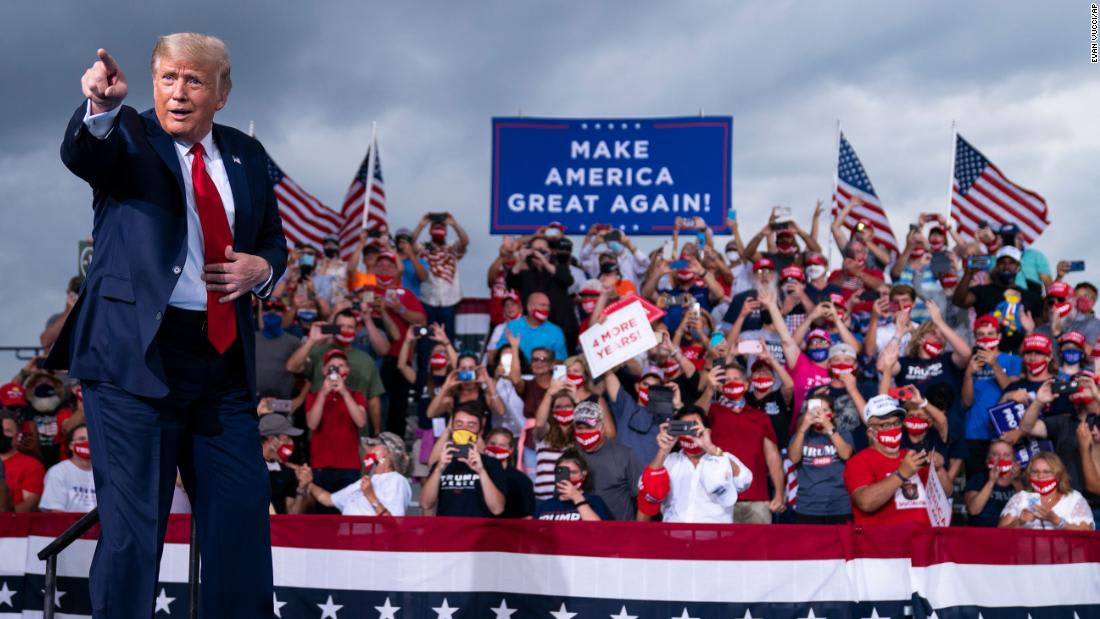 Analysis: Trump twists history of Churchill and FDR to cover up pandemic denialism