The pledge, released on Tuesday, states: "We, the undersigned biopharmaceutical companies, want to make clear our on-going commitment to developing and testing potential vaccines for COVID-19 in accordance with high ethical standards and sound scientific principles."

The companies that signed up to it are: AstraZeneca, BioNTech, Moderna, Pfizer, Novavax, Sanofi, GlaxoSmithKline, Johnson & Johnson and Merck.

The pledge comes just about a week after US Food and Drug Administration Commissioner Dr. Stephen Hahn said the agency could consider emergency use authorization or approval for a Covid-19 vaccine before critical Phase 3 trials are complete.

The nine companies on Tuesday wrote that they pledge to "Only submit for approval or emergency use authorization after demonstrating safety and efficacy through a Phase 3 clinical study that is designed and conducted to meet requirements of expert regulatory authorities such as FDA."

Pfizer and Moderna have vaccines in late-stage, Phase 3 clinical trials in the United States; Johnson & Johnson is preparing to start one.

As the UK sees a rise in coronavirus cases, officials are warning that "people have relaxed too much."

The United Kingdom recorded 2,988 new Covid-19 cases in a 24-hour period on Sunday -- the highest daily number since May. Another 2,948 new cases were reported on Monday.

Speaking to the BBC, Van Tam said that although people had been able to "relax a bit over the summer," with disease levels low following lockdown, "these latest figures really show us, as much as people might like to say, 'Oh well it’s gone away' -- it hasn’t gone away."

"People have relaxed too much, and now is the time for us to re-engage and realize that this is a continuing threat to us," he warned.

"Don't kill your gran": Health experts and officials have directed many of their warnings towards young people.

"The rise in the number of cases we've seen over the last few days is largely amongst younger people … under 25's – especially between 17 and 21," Health Secretary Matt Hancock said in an interview with LBC radio on Monday, adding the rise has been most noticeable among “more affluent, younger people”.

In an interview with Sky News, Housing Secretary Robert Jenrick warned young people who are "out enjoying themselves" to exercise caution "particularly when they go home and see their elderly relatives."

Hancock echoed a similar sentiment, telling BBC Radio 1's Newsbeat's listeners: "Don't kill your gran by catching coronavirus and then passing it on."

But some have complained that the government's messaging has been confusing.

In August, the UK government ran an "Eat Out to Help Out" scheme encouraging people to use restaurants, cafes and pubs -- which some say undermines efforts to curtail the virus.

And Prime Minister Boris Johnson has been encouraging people to return to work since May.

UK universities are also set to resume classes soon -- despite Hancock's comments that students going back to university are a "concern."

"For ministers and universities to rely on the behaviour of students, rather than deploying the public health infrastructure needed to control the virus, is a complete shirking of their own responsibility," Jo Grady, general secretary of the University and College Union, said in a statement.

"Students have been told to move, live, study and socialise together," Grady added. "It is totally unacceptable for Matt Hancock to try and suggest that they will be at fault for any second wave."

Pfizer and BioNTech are confident they can have a vaccine against the novel coronavirus ready for regulatory approval by the middle of October, BioNTech CEO and co-founder Ugur Sahin has told CNN.

"It has an excellent profile and I consider this vaccine ... near perfect, and which has a near perfect profile," Sahin said in an exclusive interview with CNN.

He added that the company's "understanding of the mode of action, in combination with the safety data coming in from the running trial" meant that they have "a lot of confidence" in it.

Sahin told CNN he believes that approval for emergency use will be granted quickly by regulatory authorities.

US drug giant Pfizer and German firm BioNTech say they plan to provide 100 million doses of their vaccine candidate, BNT162, by the end of the year, and up to 1.3 billion doses in 2021.

As Spain struggles to reign in the fastest growing Covid-19 infection rate in Europe, it's grappling with how to ensure safety in classrooms this September, even as some schools in Madrid have been forced to delay the start of school by several days or even weeks.

Spain became the first country in western Europe to reach half a million confirmed coronavirus infections on Monday, and recorded its highest daily case count since May on Friday.

In order to stop the spread in schools, the country's government laid down the rules at the end of August: All students aged six and above must wear masks in class; class sizes are to be reduced; students are to be kept in assigned "bubbles" to prevent them mixing; desks must be positioned at least 1.5 meters apart; all schools must improve open-air ventilation, and provide hand disinfection stations.

The new Covid-19 regulations, however, risk widening the gap between rich and poor, by exacerbating the disparity between private and public schools -- especially in the hardest-hit neighborhoods of Madrid.

Getting a flu shot is a safe, inexpensive way to stay healthy.

But in a typical year, less than half of Americans get the vaccination (just 45% last year). Rates in the United Kingdom are comparable, where just 44.9% of registered patients ages 6 months to 64 years old got a flu vaccination from 2018 to 2019. In the European Union, which committed in 2009 to vaccinate at least 75% of residents ages 65 and older, only 45% of people in that group received vaccines in 2018.

The number is even lower for people of color, who have been especially vulnerable during the pandemic. In the 2017 to 2018 flu season, just 28.4% of Hispanic people in the United States got vaccinations against influenza.

With the Covid-19 pandemic spreading rapidly around the globe, distributing the flu vaccine takes on new urgency, according to medical experts.

"Since hospitals and doctors' offices are going to be very busy caring for Covid-19 patients, a flu vaccine can help decrease burdens on the health care system and make sure that those who need medical care are able to get it," said Dr. Susan Bailey, president of the American Medical Association and an immunologist in Fort Worth, Texas.

It's not just to free up resources for Covid-19 patients, though.

"Influenza is a deadly disease in its own right," Bailey said.

And because flu symptoms -- including fever, sore throat and cough --  look so similar to Covid-19 symptoms, it will be impossible to rule out a coronavirus diagnosis without a test. That means a case of the flu, even if it turns out to be mild, can cause substantial disruption to work and school. 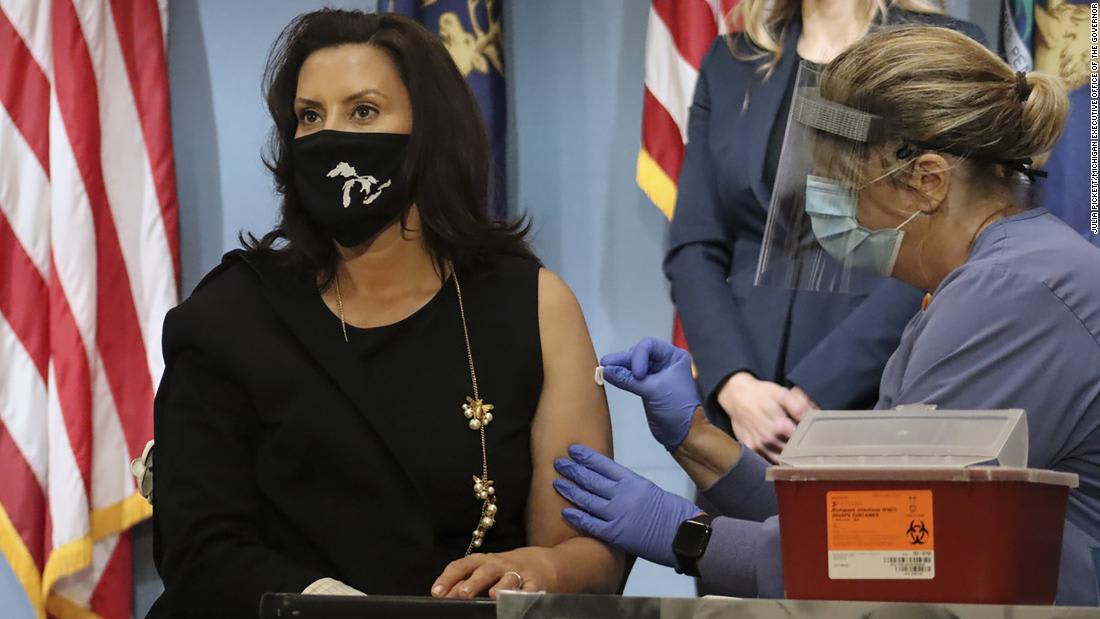 This might be your most important flu shot ever

Ahead of Labor Day this year, health officials warned that how Americans chose to ring in the unofficial start of fall could shape what the next months in the country's battle against Covid-19 will look like.

The holiday crowds mark the unofficial end to a devastating summer across the country, with Covid-19 infections surging to more than 6.3 million and deaths topping 189,000. Experts have offered a grim prediction on what the fall and winter could look like, with the pandemic stacking up against flu season and new fronts opening up, including schools and college campuses.

"We're heading into a more difficult season," Dr. Scott Gottlieb, the former US Food and Drug Administration commissioner said on CBS' Face the Nation.
"We're heading into the fall and the winter, when we would expect a respiratory pathogen like a coronavirus to start spreading more aggressively than it would in the summer time."

New challenges ahead: With cooler weather ahead, it's likely many of the gatherings that have already been taking place -- many against experts' advice -- will now move indoors, where health officials have said the virus can spread more easily.

Masks: Months into the pandemic, safety measures like face masks remain a point of contention nationwide -- despite experts' projections that more mask-wearing could mean thousands of lives saved by the end of the year.

Campuses and schools: With tens of thousands of students back on campus, institutions are facing massive challenges. Covid-19 cases in colleges have been linked back to activities including athletics, off-campus gatherings and Greek life. 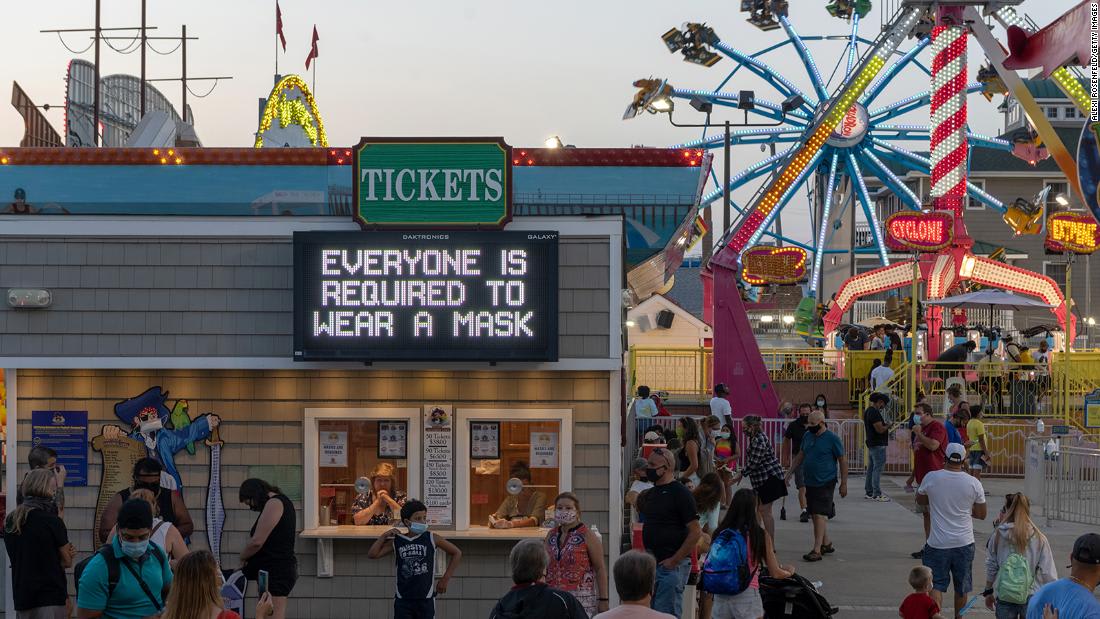 Officials in Hong Kong said they are discussing a potential travel bubble with 11 countries, as the territory is set to relax social distancing measures on Friday.

Hong Kong Secretary for Commerce and Economic Development Edward Yau said five or six nations have shown an interest, including Japan and Thailand.

Yau said that travelers within the bubble might be required to take a coronavirus test before departure and upon arrival, and could be limited to visit a few tourist attractions with quotas.

Cases ease: Hong Kong reported six new Covid-19 cases in the past 24 hours, three of which were were locally transmitted. This is the lowest number of daily cases announced since a third wave of the virus hit the city in July.

Chinese President Xi Jinping said China acted in an "open, transparent, and responsible manner" in its handling of the coronavirus pandemic.

Xi made the comments while awarding medals to four people for their outstanding contributions during the pandemic at a ceremony today in Beijing.

Among the four were the country's top respiratory disease expert, Zhong Nanshan, according to Chinese state broadcaster CCTV.

Xi said China reported information on the virus "at the earliest time possible" to the World Health Organization "and relevant countries, regions and organizations."

"China is the first major economy to resume growth after the heavy blow of Covid-19, and is leading the world in virus control and prevention and economic recovery, which shows China's great capacity for restoration and exuberant vitality," he said.

China has been criticized for downplaying or even covering up the severity of the virus at the start of the pandemic, and for ignoring evidence that it spread from person-to-person until it was too late.

China has repeatedly denied these claims.

This phase will see the number of diners allowed to eat together at restaurants increased from two to four, and allows certain entertainment venues to reopen, such as arcades, performance venues, mahjong centers, indoor sports facilities and public entertainment venues.

The third phase will also allow up to four people to gather publicly instead of two.

Travel bubble talks: Yau also said Hong Kong is discussing a potential travel bubble with 11 countries. Five or six nations have shown an interest, including Japan and Thailand, he said.

Yau added that travelers within the bubble might be required to take a coronavirus test before departure and upon arrival, and could be limited to visit a few tourist attractions with quotas.