It's set to be a Tour de France like no other.

Watched on television by millions across the world, the annual race is deeply embedded in French culture as it weaves its way across stunning countryside and vertiginous mountains, as well as through picturesque towns and cities before concluding on Paris' Champs-Elysées.

The Tour is normally held during July, but the global pandemic put paid to that idea, hence the August 29 start. The pandemic and a recent spike in new infections in France has also left organizers with a real logistical challenge in how best to stage the 23-day race.

In red zones, the authorities are able to make masks compulsory outdoors. But with the French government ready for worst-case scenarios with plans for local or national lockdown in place, questions are being asked as to whether the Tour will even reach Paris.

The Tour de France will not stop if there's a positive case, even if nobody knows whether it will be completed or not," International Cycling Union (UCI) president David Lappartient told Reuters.

Teams will be expelled from the 2020 event if two riders or members of staff show strong symptoms or test positive for Covid-19. 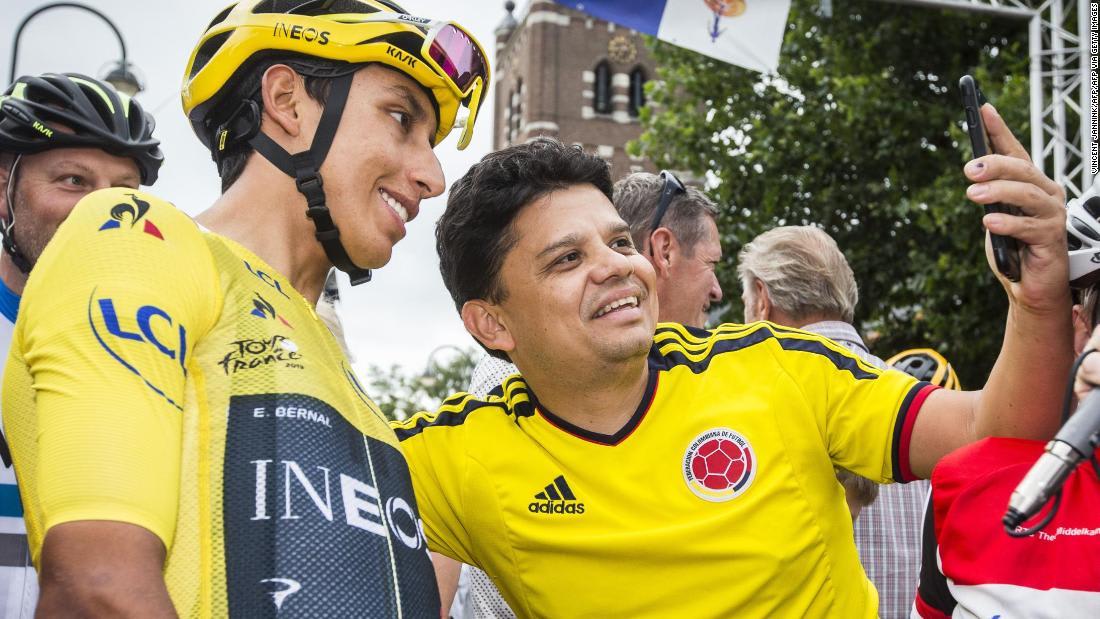 Vibrant parades, feathered dancers, infectious live music, and the aroma of delectable Afro-Caribbean cuisine -- these are the things many people look forward to when they descend on the streets of west London during the UK's August holiday weekend.

But, for the first time in its 54-year history, Notting Hill Carnival will be an entirely virtual affair after falling victim to the ongoing coronavirus pandemic.

The annual street party, which was originally scheduled for August 30 and 31 and normally draws more than a million people to the city's Notting Hill, Westbourne Park, and Kensington districts, was canceled in May in response to restrictions on mass events.

Instead, one of Britain's biggest cultural events will be live streamed online so disappointed revelers can still celebrate the carnival culture and arts at home.

Announcing "Notting Hill Carnival 2020: Access All Areas," organizers have promised a three-day celebration of Afro-Caribbean culture like no other.

We provide the entertainment and people can get in the carnival spirit from the comfort of their own homes," Notting Hill Carnival executive director Matthew Philip told CNN.

The virtual incarnation of the event "founded to bring people together during trying times" kicks off on Saturday. 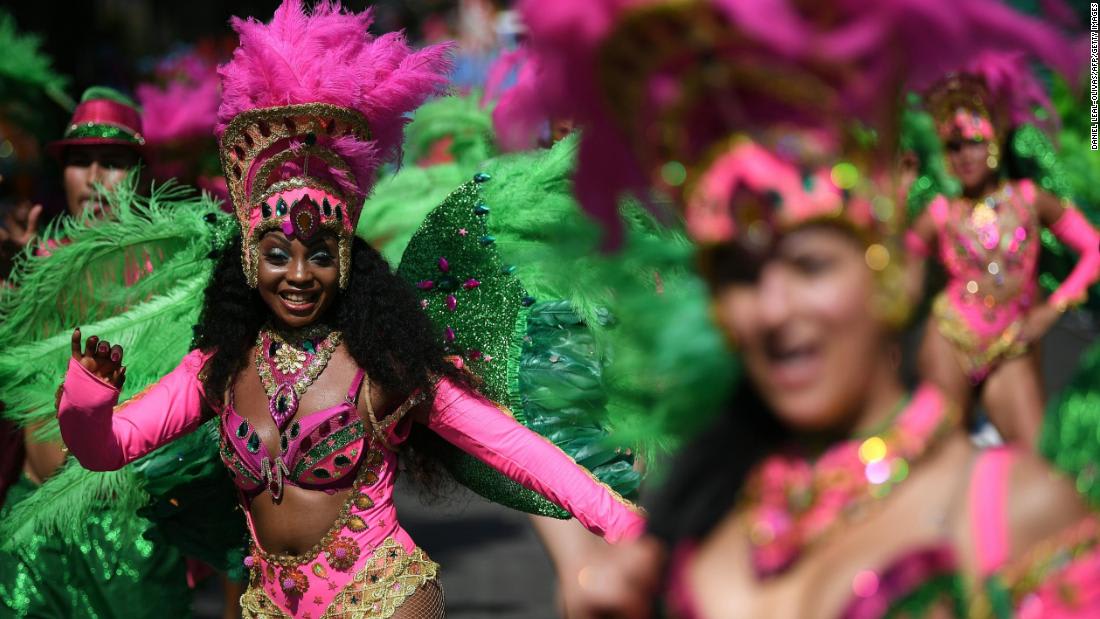 Born out of racial tensions, Notting Hill Carnival has a rich history. But as it moves online, what can we expect this year?

What's the perfect pandemic hobby? As people across the globe have adjusted their lives to Covid-19, activities as varied as bread baking and gaming have trended.

But while carbs and screen time can bring a satisfying rush of endorphins, the ideal Covid pastime should offer more sustaining thrills. That means an activity that's good for your body, mind and the planet.

For some, it's a first-time foray into gardening, a low-impact physical activity that has been shown to reduce stress levels. Another option is the UK-led trend of "wild swimming," seeking out the nearest open water for a mind-clearing dip. (Want to double down on the benefits? Try ice swimming.)

If you'd prefer to stay on dry land, explore your neighborhood by running. All you need is a pair of shoes: or not.

Whatever you choose, remember that even in the most trying moments, it's worth taking the time to care for yourself. Your body — and the planet — will thank you. 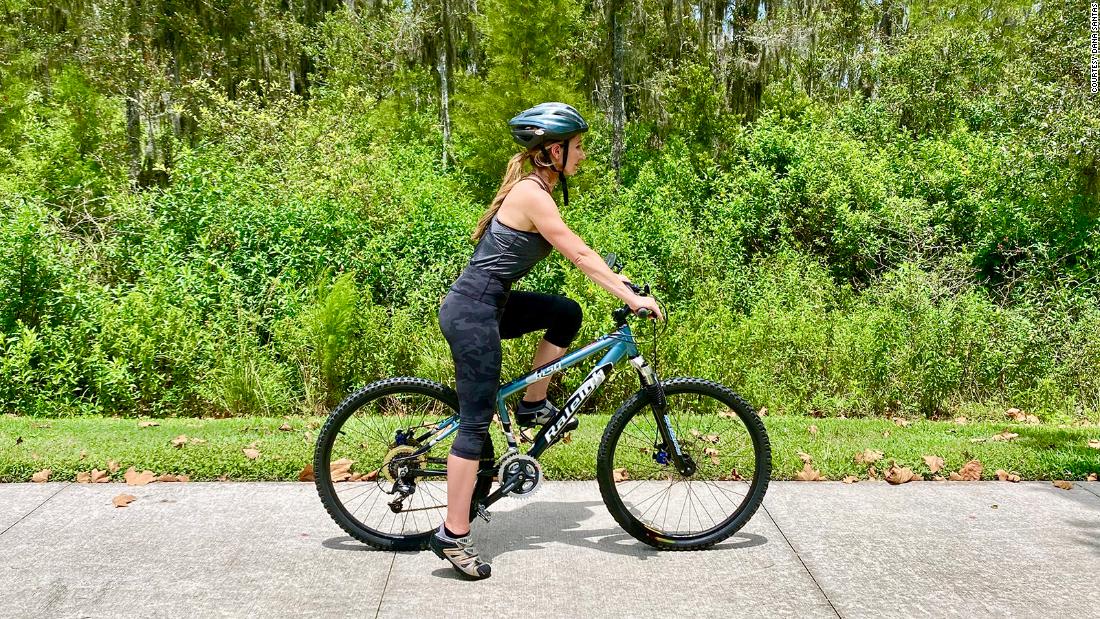 When Wimbledon was canceled amid the ongoing coronavirus pandemic, it became the first of tennis' grand slams to be scrapped since World War II in 1945.

There was uncertainty, too, surrounding the next major, the US Open, but the event is going ahead in New York with no fans, no mixed doubles and limited fields in men's and women's doubles. This despite tournament revenue -- which hit $399.6 million in 2019 -- being expected to drop by as much as 80%.

Be it in the NBA, NHL or Champions League, bubbles are the new norm in sports, accompanied by coronavirus tests and temperature checks.

The US Open is also operating a bubble, with players and their limited entourages being shuttled to and from the tournament's hotels to the tennis site in Flushing Meadows, Queens. Instead of the usual accommodation in swanky, high-rent Manhattan, all but a few are staying in Long Island at the Long Island Marriott and Garden City hotel.

Players got used to the new setup this week -- since a warm-up tournament normally held in Cincinnati, Ohio, is being staged at the US Open site -- with few complaints so far.

"It's nice," 2012 US Open champion Andy Murray told reporters. "They've done a really good job at the hotel. They've got games and arcades and things like that.

Private housing was an option given to players but Murray declined because he said costs were "astronomical."

But Serena Williams -- making a ninth attempt at landing a record 24th grand slam title -- and Novak Djokovic preferred their own digs.

For Williams, past health scares including pulmonary embolisms swayed her decision.

"I didn't want to be in the hotel because I have lung issues, so I felt like it was actually a big risk for me personally," the American told reporters. "At my house, I can control more. There is no housekeeping, there is none of that type of stuff."

Djokovic, who tested positive for the coronavirus after his ill fated Adria Tour was cut short, is based at a home described by the New York Times as "nestled amid trees." 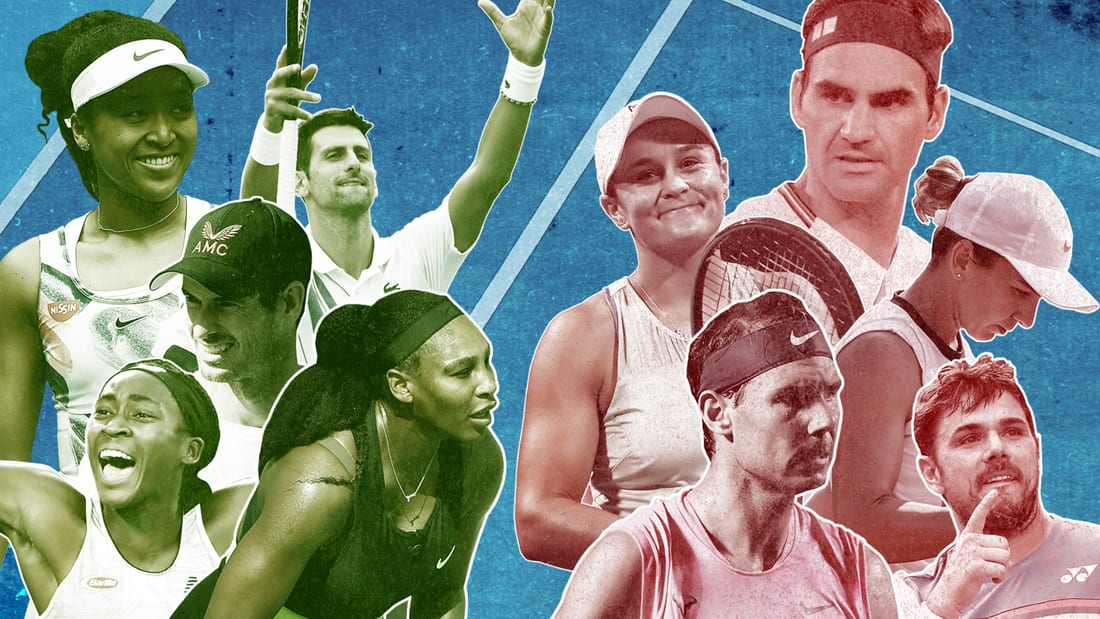 US Open 2020: A tennis grand slam like you've never seen before

Children can carry coronavirus in their noses and throats for weeks even if they don't show any symptoms, which might explain how the virus can spread silently, researchers in South Korea reported Friday.

"In this case series study, inapparent infections in children may have been associated with silent COVID-19 transmission in the community," the researchers wrote.

"Interestingly, this study aligns with adult data in which up to 40% of adults may remain asymptomatic in the face of infection," Dr. Roberta DeBiasi and Dr. Meghan Delaney, both of Children's National Hospital in Washington, DC, wrote in an accompanying editorial. Neither was involved in the research.

"In this study, the authors estimate that 85 infected children (93%) would have been missed using a testing strategy focused on testing of symptomatic patients alone," they wrote.

The study comes out at a time when the US Centers for Disease Control and Prevention has been criticized for changing its guidelines on asymptomatic testing, which the American Academy of Pediatrics called "a dangerous step backward" in a statement on Friday 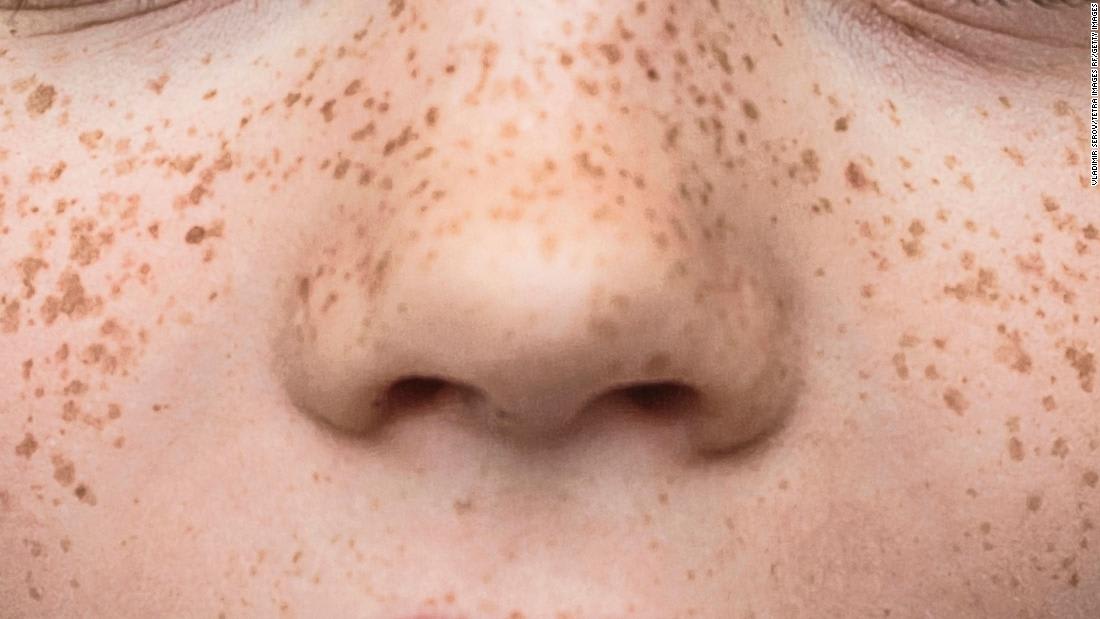 There were 323 new coronavirus infections recorded in South Korea on Friday -- 308 of which were local transmissions, according to the nation’s Centers for Disease Control and Prevention (KCDC).

It comes as health authorities announced they have been unable to trace 19.4% of the country's total confirmed cases over the past two weeks, with epidemiological investigators still working to figure out the infection routes, KCDC Vice Director Kwon Joon-wook said.

So far, 1,018 confirmed cases have been linked to Seoul’s Sarang-jeil Church infection cluster, while another 307 are linked to anti-government rallies in Seoul on August 15, according to the KCDC.

According to Johns Hopkins University, 46,156 new cases of the novel coronavirus have been diagnosed in the United States in the past 24 hours -- taking the total number of confirmed infections in the country to 5,913,941.

There were 976 new coronavirus-related deaths recorded on Friday, according to Johns Hopkins, with the US death toll now 181,800 overall.

For regular updates on the Covid-19 situation in the US, follow CNN’s map, which refreshes every 15 mins:

A member of the Indian Parliament died at a hospital in the southern state of Tamil Nadu Friday evening, after contracting Covid-19.

“We are deeply saddened by the untimely demise of Shri H. Vasanthakumar. A staunch Congressman, true leader of the people & beloved MP. He will be sorely missed by all members of the Congress party & his followers. Our prayers are with his family in this time of grief,” the Congress party said on its official Twitter account Friday.

“Saddened by the demise of Lok Sabha MP Shri H. Vasanthakumar Ji. His strides in business and social service efforts were noteworthy. During my interactions with him, I always saw his passion towards Tamil Nadu’s progress. Condolences to his family and supporters. Om Shanti,” Prime Minister Narendra Modi tweeted.

India is among the countries hit hardest by the coronavirus pandemic, with the third-highest number of infections and fourth-highest death toll. As of Saturday, it had 3,463,972 confirmed coronavirus cases and 62,550 related deaths, according to Johns Hopkins University's tally.

Turquoise waters, beaches of golden sand, dolphins swimming offshore. The Fernando de Noronha archipelago off the coast of Brazil is one of the most beautiful destinations anywhere in the world

And now it's open to travelers again -- but with an unexpected catch. You can go only if you show you have had Covid-19.

Fernando de Noronha, home to Baia do Sancho, named the world's best beach by Trip Advisor's Traveler's Choice Awards this year, will reopen next week, according to authorities in the northeastern Brazilian state of Pernambuco.

"To land on the archipelago, the tourist will need to present the result of a positive PCR test that is at least 20 days old, or the result of the serological test showing the presence of antibodies against Covid," its administrator, Guilherme Rocha, told a news conference on Thursday. 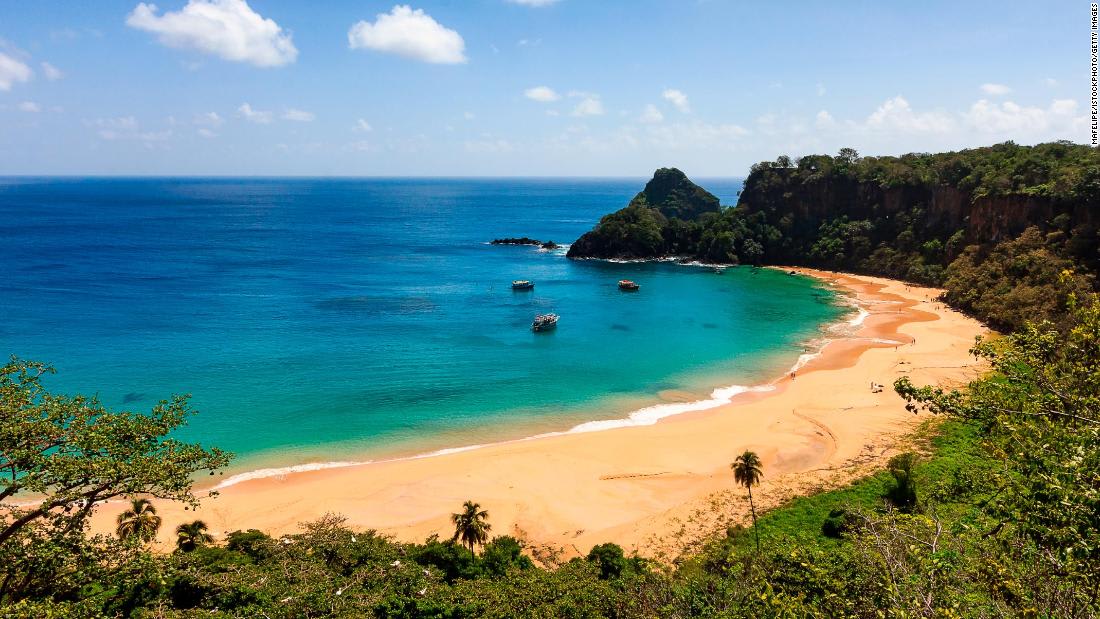 Paradise islands reopen only to visitors who've had Covid-19