The UK government is telling people to go back to their workplaces, just a day after the country registered its highest daily increase in new coronavirus cases in months.

“Our central message is pretty straightforward: we’re saying to people it is now safe to return to work,” UK Transport Secretary Grant Shapps said during an interview on Friday.

Your employer will have, or should have, carried out work to make your employment place Covid-secure."

Speaking to the BBC, the government minister asserted that the UK has “got the rate of infection down” and encouraged citizens to return to their offices.

However, his comments come a day after the UK reported 1,522 new cases, and the highest daily increase in new infections since June 12.

According to government data, a further 12 deaths were recorded on Thursday, bringing the UK's official coronavirus death toll to 41,477.

Germany will introduce tougher measures to curb the spread of coronavirus in the country ahead of the autumn and winter season, including new travel regulations, Chancellor Angela Merkel announced on Thursday.

"We can see that the number of infections has risen in recent weeks … we take this increase in the summer months very seriously," Merkel said.

Speaking during a news conference after a meeting with federal and state government leaders, Merkel added that Germany has ''come through this pandemic well" so far, but cautioned that new measures would be needed to tackle the rise in the infection rate.

The new restrictions include:

Latest numbers: Confirmed Covid-19 cases have, over recent weeks, risen to levels not seen since the end of April in Germany. On Friday, the country's public health agency, the Robert Koch Institute, confirmed that at least 1,571 new infections had been recorded, bringing the total to 239,507 cases and 9,288 deaths since the beginning of the outbreak.

Concerns over the spike in cases have also led authorities in Berlin to ban a protest planned to take place this weekend against the German government's coronavirus restrictions, citing concerns over hygiene regulations; organizers, however, say they will continue to demonstrate, in defiance of the ban.

"Even though there is one year to go in my tenure and there are challenges to be met, I have decided to stand down as prime minister," Abe said at a news conference in Tokyo on Friday.

Abe suffers from colitis, a non-curable inflammatory bowel disease, which was also a factor in his sudden resignation as prime minister in 2007, ending his first term after just over a year in office. On Monday morning, Abe visited Keio University Hospital in Tokyo for what was his second hospital visit in a week.

"For almost eight years I controlled my chronic disease, however, this year in June I had a regular check-up and there was a sign of the disease," Abe said. "I made a judgment that I should not continue my job as prime minister" he said. "I need to fight against the disease and need to be treated."

Abe had been expected to hold a news conference on Friday to update on the coronavirus situation in Japan. 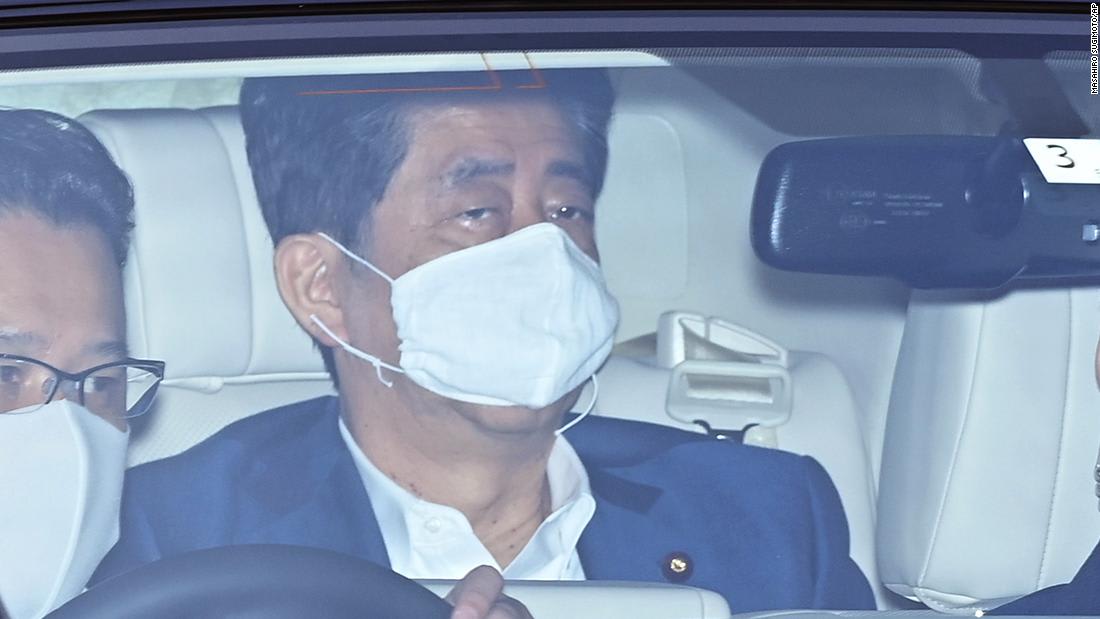 The voluntary mass testing of citizens for coronavirus in Hong Kong will begin on September 1, the city's top official said on Friday.

Tests will be free of charge for residents of the city, home to around 7.5 million people, which has been grappling in recent weeks with a third wave of Covid-19 infections, said Chief Executive Carrie Lam.

Any Hong Kong resident with no symptoms, except children under the age of 6 and people with bad throat or nasal conditions, can join the testing program, Secretary for the Civil Service Patrick Nip said. The testing will last for seven days, after which the government will review the program and announce whether to extend it for another week.

“We believe that the testing can find out the hidden patients and give them treatment,” Lam said. “Hong Kong will be much better equipped to deal with the possible next virus wave now.”

Community testing centers will be set up across 18 city districts to collect samples, Nip explained. Residents will have to register online before getting tested.

Hong Kong confirmed 27 new cases of Covid-19 on Friday, bringing the total number of confirmed cases identified in the city to 4,631.

South Korea tightened its coronavirus restrictions in the greater Seoul metropolitan area on Friday in an effort to curb a resurgence of the epidemic.

Starting from August 30, franchise cafes will be able to provide takeout service only, while restaurants and bakeries must stop eat-in service in between 9 p.m. to 5 a.m., Health Minister Park Neung-hoo said in a briefing on Friday.

Gyms and indoor sporting facilities will be shuttered, according to Park. The measure will be effective from August 30 until September 6.

Earlier on Friday, Prime Minister Chung Sye-kyun said the second-highest level of social distancing measures will be maintained in greater Seoul for one more week.

The latest outbreak in the country has been linked to churches in Seoul and the neighboring provinces. Members of religious groups have been criticized for withholding key information and obstructing public health authorities in their fight against the pandemic.

Chung said enacting the highest social distancing level 3 measures would be a last resort for the country, considering the strong impact that would have on society.

Among the new cases, 145 are from Seoul, 112 from its surrounding Gyeonggi province and 27 from nearby Incheon City.

This post has been updated to reflect that the new measures apply to the greater Seoul metropolitan area.

Tokyo's total number of confirmed coronavirus cases topped 20,000 on Thursday after the Japanese capital recorded a further 250 infections, according to the metropolitan government.

In response, the local government said Thursday that it would extend an appeal to restaurants serving alcohol and bars to voluntarily shorten their hours until September 15. The request to close by 10 p.m. was set to end August 31.

The government will pay a cash handout of 150,000 yen ($1,410) to businesses that comply, according to Tokyo Governor Yuriko Koike.

Growing caseload: The new Tokyo cases were among 872 new infections and 12 virus-related deaths recorded nationwide on Thursday, according to Japan's Health Ministry.

That takes the nationwide total to 66,285 confirmed cases, including 1,251 fatalities.

A government aide told CNN he heard that Abe has conveyed his desire to resign. Abe had been expected to hold a news conference later on Friday to update on the coronavirus situation in Japan.

On Monday morning, Abe visited Keio University Hospital in Tokyo for what was his second hospital visit in a week. Abe suffers from colitis, a non-curable inflammatory bowel disease, which forced him to resign during his first stint as the country's leader from 2006 to 2007. He became Prime Minister again in 2012.

Abe is Japan's longest-serving head of government in terms of consecutive days in office.

Coronavirus criticism: Japan has recorded more than 66,000 Covid-19 cases, and has struggled to get the pandemic under control despite being among the very first countries to be hit by the virus. Throughout the summer, as the rest of East Asia has moved to control the pace of infections, Japan's outbreak has spiked, with more than half of all cases being recorded since July.

Many people have expressed dissatisfaction with the government's handling of the virus, from a slow initial response and refusal to acknowledge the crisis, which many saw as linked to a desire to avoid canceling or postponing the Tokyo 2020 Olympics (since pushed to next year), to the ongoing failure to take sufficient action to rein in cases.

This is a developing story. Read more updates here:

Lari said 3,822 Covid-19 patients are in critical condition and being treated in intensive care units.

Iran, the original epicenter of the outbreak in the Middle East, has recorded more coronavirus cases and deaths than any other country in the region.

A further 45,966 new coronavirus cases and 1,116 virus-related fatalities were recorded in the United States on Thursday, according to Johns Hopkins University.