Japan has recorded at least 22,500 Covid-19 cases since August 1, more than a third of its nationwide total since the pandemic began.

In total, Japan has confirmed 59,213 cases and 1,157 deaths, according to the country's Health Ministry.

“We are right in the middle of a second wave. A third and fourth wave can be expected in the future,” President Kazuhiro Tateda of the Japanese Association for Infectious Diseases told a conference on Wednesday. “We need to reduce the number of seriously ill patients in order to protect our hospitals from falling into confusion.”

Some background: There is an increasing sense of dissatisfaction with the Japanese government's response to the virus and it comes as Japan appears to be on the brink of another major Covid-19 outbreak. For the past 12 days, the Health Ministry has recorded more than 900 daily infections and last Friday marked a new daily high of 1,601 new cases nationwide.

New cases: On Wednesday, Japan reported 1,085 Covid-19 cases and 16 new deaths. The number of patients in critical care has increased three-fold this month, from 80 patients on August 1 to 239 patients on Wednesday.

Heat wave: Meanwhile, a heat wave poses new challenges for mask wearers. The Fire and Disaster Management Agency said more than 12,800 people were taken to hospital with heatstroke from August 10-16, twice the number of people in the previous week. 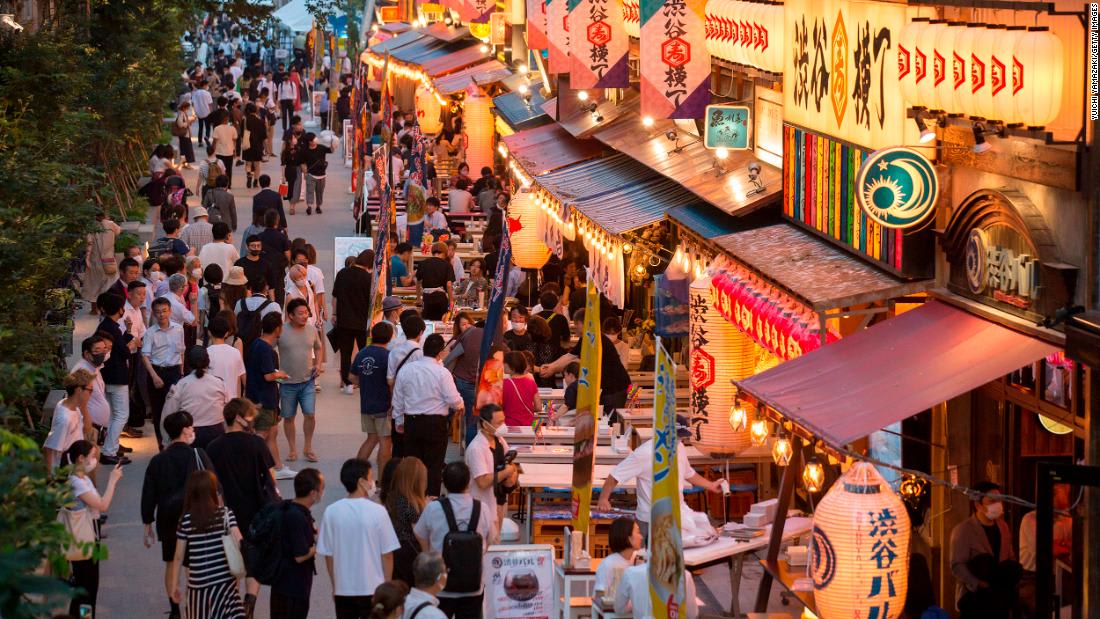 Coronavirus fatigue is fueling defiance in Tokyo, even as the case count rises

Most of the cases were detected in the capital Seoul and its surrounding areas.

It's the seventh consecutive day that South Korea has reported cases in the triple digits.

Church clusters: A South Korean religious group is at the center of the new coronavirus outbreak. As of 6 p.m. local time Wednesday, 630 people linked to the Sarang-jeil Church had tested positive, Kim said.

The Health Ministry had acquired an additional list of visitors to the church, but there are around 700 people whose contact information has not been confirmed or are avoiding being tested, Kim said.

Kim added that the ministry is cooperating with the police and telecommunication companies to acquire their contact information.

Protest outbreak: As of Wednesday noon, 53 people had tested positive in relation to a mass anti-government rally on August 15, which was banned by authorities. Among the infected from the protest were 33 people related to the Sarang-jeil Church, Kim said.

Since the first case related to the church was found on August 12, more than 1,600 Covid-19 cases have been reported in South Korea.

Mexico recorded 5,792 new cases of Covid-19 and 707 new deaths on Wednesday, according to the Health Ministry.

Mexico has reported the third-highest number of deaths in the world from coronavirus, following the United States and Brazil, according to Johns Hopkins University.

Only Brazil and Peru have recorded more Covid-19 cases than Mexico in Latin America, according to JHU.

United States President Donald Trump highlighted New Zealand's fresh coronavirus outbreak for the second time this week, while claiming the US has done a good job of containing the virus.

"New Zealand had a big outbreak, and other countries that were held up to try and make us look not as good as we should look, because we have done an incredible job," Trump said at a news briefing on Wednesday.
"They’re having a lot of outbreaks, but they’ll be able to put them out, and we put them out."

New Zealand is currently grappling with a reemergence of cases, which came shortly after the country went more than 100 days with no local transmissions.

In response, New Zealand Prime Minister Jacinda Ardern said she didn't see any real comparison between her country's current cluster and the tens of thousands of cases that are reported daily in the US.

"Obviously, every country is experiencing its own fight with Covid-19; it is a tricky virus, but not one where I would compare New Zealand's current status to the United States," she said.
"New Zealand's nine cases in a day does not compare to the United States' tens of thousands, and in fact does not compare to most countries in the world. I'm not concerned about people misinterpreting our status."

That raises the country's total to 1,304 confirmed infections -- 101 of which remain active. New Zealand has also reported 22 coronavirus-related deaths.

Covid-19 cases are declining across the United States and it’s clear “trends are going in the right direction,” Adm. Dr. Brett Giroir said during a US Department of Health and Human Services telebriefing on Wednesday.

Giroir says wearing a mask, staying a safe distance away, and washing your hands along with testing “continues to yield results.”

But Giroir doesn’t want the news to lead to complacency because “this thing could turn around very quickly if we're not careful. We saw that early on after Memorial Day, and the couple weeks afterward that sort of started the current outbreak, and it takes many weeks to get control over this once you institute measures."

Giroir, the assistant secretary for health at HHS, said new cases are down 22% since their peak in July -- but noted that “tragically,” deaths are the lagging indicator and still remain flat.

More data: Giroir said of the 56 US jurisdictions, 80% (45 out of 56) are currently in a declining pattern when it comes to new cases. Six of the 56 are flat. He said five are in an upward trajectory -- Guam, Hawaii, California, Indiana and Vermont.

France confirmed a new daily high in coronavirus cases since coming out of lockdown in mid-May, with 3,776 infections reported by the National Health Agency on Wednesday.

That brings France's total number of confirmed cases to 225,043.

While the latest data released by the French National Health agency shows a decreasing trend of people hospitalized and in intensive care units, the agency said in a statement that “in mainland France, all indicators continue to increase and transmission of the virus intensifies."

"It concerns all age groups and more particularly young adults,” the statement added.

Mandatory masks: Following the surge in the number of new Covid-19 cases, the French government will make it mandatory to wear masks in enclosed shared spaces such as corporate offices from September 1, Minister of Labor Elisabeth Borne announced on Tuesday.

The US' leading infectious disease expert, Dr. Anthony Fauci, said health care professionals must continue to “make recommendations and policy based on data and evidence.”

“Speculations, anecdotal, those kinds of opinions, really need to be put aside,” he said while speaking during a George Washington University webinar on Wednesday.

“Everything that we are talking about in the arena of public health, any intervention, it could be a diagnostic, a vaccine, a therapy -- it has to be made on the basis of sound scientific data and evidence.”

Fauci said he and his public health colleagues do this every day, holding true to their ethical principles.

"You don't change your ethics because of the situation you are in," he said. "There are certain things that are constant; science, data and really good evidence are constant," he said.

"If the situation changes, the data may change and you make your decisions. What doesn't change are ethical principles. They are clear and immutable."

Spain reported 3,715 new coronavirus infections within the past day, the Health Ministry said on Wednesday, marking the highest increase in daily cases since the end of the country’s lockdown in late June.

Until Wednesday, Spain’s highest number of new cases since the lockdown ended was on August 14, with a total of 2,987 new cases -- making the latest figures a significant increase of 728 cases in comparison to the previous high.

Spain's cumulative case number, which includes antibody tests on people who may have already recovered from the virus, rose by 6,671 to 370,867.