New Zealand confirmed 13 new cases of Covid-19 over the past 24 hours, Director-General of Health Dr. Ashley Bloomfield said on Tuesday.

All of the new cases were locally transmitted. Twelve of the cases were linked to existing coronavirus patients, and the 13th case remains under investigation -- though it's believed to be connected to the same cluster as the others.

That brings the country's total number of coronavirus infections to 1,293. Of these, 90 are active.

Racing to contain a new outbreak: The fresh outbreak of cases emerged last week, ending New Zealand's enviable run of more than 100 days without any locally transmitted infections. The new cluster has prompted New Zealand to extend a lockdown on its most populous city, Auckland, as authorities scramble to trace the source of the outbreak.

Since authorities began conducting contact tracing last Tuesday, they have identified 1,880 close contacts, most of whom are now self-isolating and have either been tested or are waiting for a test.

New Zealand has processed more than 100,000 tests in the past five days alone, Minister of Health Chris Hipkins said today.

Prime Minister Jacinda Ardern announced Monday that the country’s election would be delayed by four weeks, to October 17, due to concern over the spread of coronavirus.

Tens of thousands of demonstrators took to the streets in Argentina on Monday to protest against the government of President Alberto Fernandez.

At least 25,000 people marched in the capital Buenos Aires, according to the local police department. The demonstrators are protesting the government's handling of Covid-19 and the country's economic crisis, as well as a judicial reform bill launched by Fernandez.

Protests were also reported in other Argentinian cities, including Cordoba, Mar del Plata and Rosario.

As of Monday, Argentina’s Health Ministry had reported a total of 299,126 coronavirus cases, including 5,814 deaths.

On Friday, Fernandez announced quarantine measures will remain in place across the country until the end of the month.

A total of 155 Colorado College students have been placed under quarantine for two weeks after a new student arrived on campus last Friday and tested positive for Covid-19, the college announced in its weekly newsletter.

The quarantined students have been told not to leave their rooms except to go to the restroom and only while wearing a mask, according to the newsletter.

University clusters nationwide: As schools and universities reopen for the new academic year, there are already reports of new clusters emerging at some locations -- and in some cases, those schools have been forced to close again just days or weeks after opening.

More than 2,000 students, teachers and staff members across five states have been quarantined after at least 230 positive coronavirus cases were reported.

Schools in Georgia were hit particularly hard; in the Cherokee County School District, which reopened schools on August 3, more than 1,100 students, teachers and staff members are under quarantine after new cases were reported. 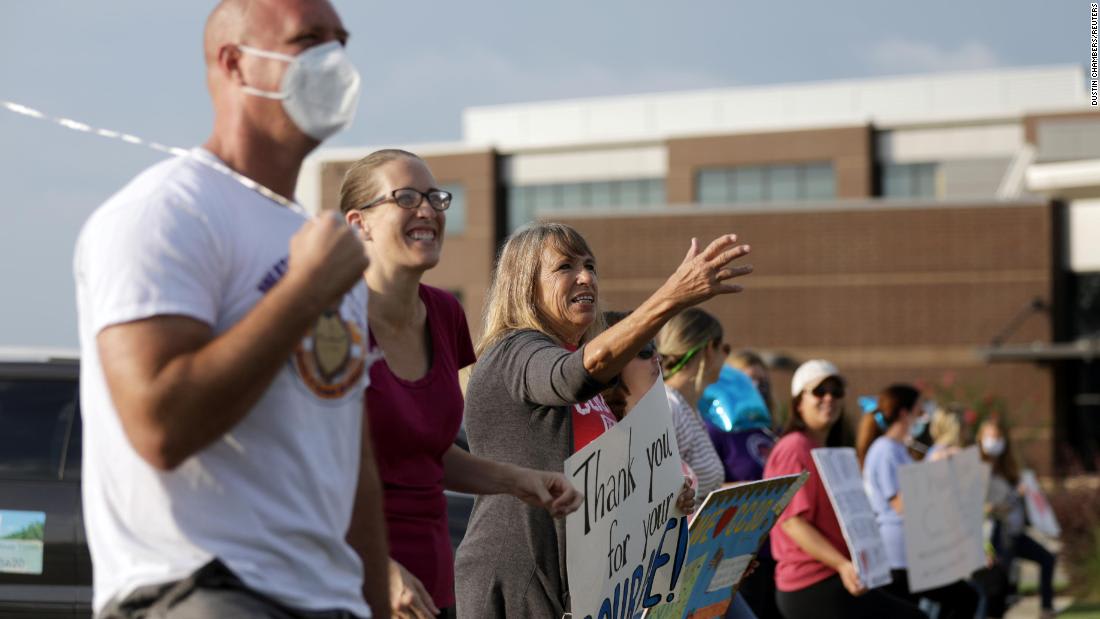 More than 2,000 students, teachers and staff quarantined in several schools

Mexico recorded 3,571 new cases of Covid-19 on Monday, bringing the total number of infections confirmed in the country to 525,733.

Only the United States and Brazil have recorded more coronavirus deaths than Mexico, according to data from Johns Hopkins University.

The United States has reported 33,326 new cases of Covid-19 and 406 new related deaths so far today, according to data from Johns Hopkins University.

"Several commercial laboratories have submitted backlogs of test results to DSHS this week.
As the backlogged test results are added to the electronic reporting system, some counties are receiving notification of COVID positive results that were previously diagnosed but not reported to the local health department at the time the test was completed.
For this reason, the statewide confirmed case counts and some county case counts will include some older cases over the next few days. DSHS works daily with laboratories to facilitate reporting to ensure local jurisdictions receive timely laboratory reports.
Patients were notified at the time of diagnosis through a separate process."

Note: These numbers were released by the Texas Department of State Health Services, and may not line up exactly in real time with CNN’s database drawn from Johns Hopkins University and the Covid Tracking Project

Los Angeles County is continuing to show progress in the fight to curb the spread of Covid-19, health officials say.

In a Monday news conference, Los Angeles County Public Health Director Barbara Ferrer revealed the daily number of hospitalizations have steadily decreased in the last month by 37%, dropping from 2,719 in mid-July to 2,388 in mid-August.

“We do continue to be cautiously optimistic that all the sacrifices and the hard work that we’ve seen across our county is working and that we’re in fact back to slowing the spread,” Ferrer said.

Brazil has reported at least 19,373 new Covid-19 cases and 684 deaths in the past 24 hours, the country’s health ministry reported Monday.

The total number of confirmed coronavirus infections now stands at 3,359,570. At least 108,536 have died from Covid-19 in the country, according to the ministry’s data.

São Paulo State, the hotspot of the pandemic in Brazil, reported 3,022 new Covid-19 cases, bringing the state’s total to 702,665 confirmed infections, according to data presented today by the state government at its daily news conference.

The Kansas City Chiefs will celebrate their Super Bowl LIV title and take on the Houston Texans in the NFL’s season opener in front of spectators at Arrowhead Stadium.

The Chiefs, in consultation with health officials and the NFL, have announced a plan allowing 22% of stadium capacity (under 17,000 fans) to attend upcoming home games. Fans with tickets will also be allowed to tailgate ahead of kickoffs.

Tickets will be sold and grouped in six seats or less.

The team says fans will be required to wear a mask at all times while at the stadium, except for when they are “actively eating or drinking.”

All staff working home games will be directed to wear personal protective equipment.

The first game of the season is Sept. 10.