There’s no way. There's just no way," said Dr. Peter Hotez, a vaccinologist at Baylor College of Medicine, and a CNN medical analyst.

Last week President Trump said he was "optimistic" a vaccine would be ready around Election Day on November 3.

"I believe we'll have the vaccine before the end of the year, certainly, but around that date, yes. I think so," Trump said Thursday.

CNN obtained part of an email Moderna sent on Friday to the principal investigators of its vaccine trials. It says 4,536 study subjects have enrolled in the trials.

The trial started on July 27, and intends to enroll 30,000 study subjects. The company has said it is "on track to complete enrollment in September."

Moderna won't make that 30,000 in September if they continue at the rate of the first two weeks, but it’s likely the speed of enrollment will ramp up, since as of Friday only 54 of the study's 89 sites were operating, according to the company's email to its researchers.

Moderna's numbers did increase significantly from the first week of the trial to the second week.

Even if Moderna does reach its goal of full enrollment during the month of September, the company still won't have a vaccine on the market by Election Day, infectious disease experts say.

I don't see how that would be possible," said Dr. Paul Offit, a vaccinologist at Children's Hospital of Philadelphia.

After Moderna enrolls its subjects and gives them their first shot, they then have to wait 28 days before giving them a second shot.

That means participants enrolled at the end of September won’t be getting their second injections until the end of October.

Offit said they then have to wait two weeks for the vaccine to become fully effective.

"That takes you past Election Day," Offit said.

After that, the researchers have to wait and see who gets sick with Covid-19 and who does not. Half the study participants are receiving the real vaccine, and half get a placebo, or a shot that does nothing. Neither the participants nor the doctors giving the vaccines know who got which injections.

Both Offit and Hotez predict there will be results from the Moderna study in the first quarter of 2021 at the earliest.

Maybe by Inauguration Day, we might have a glimmer of whether the vaccine is working and be able to assess its safety," Hotez said. 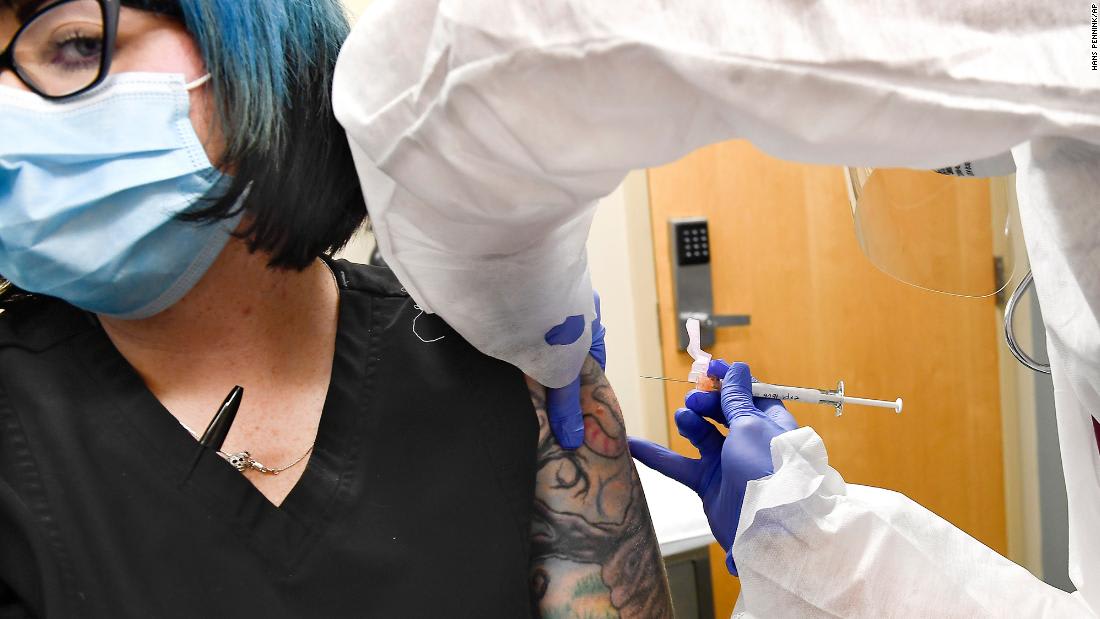 Schools in England closed in March, though many remained partially open for vulnerable children and the children of key workers.

Some pupils in kindergarten, grade 1 and grade 6 went back to school in June.

"It’s not right that kids should spend more time out of school," he said during the visit.
"It’s much, much better for their health and mental wellbeing, obviously their educational prospects, if everybody comes back to school full-time in September."
"It’s our moral duty as a country to make sure that happens."

Johnson's comments come after he wrote an article for British newspaper the Mail on Sunday, declaring school reopening a "national priority."

He said children were at increased risk of domestic violence, exploitation and addiction if they remained out of school for any longer than necessary.

Johnson has repeatedly said that the risk of children becoming severely ill from coronavirus is “low," but safely reopening schools remains a fraught process for officials.

A key member of the group advising the government on its Covid-19 response said last week that the UK may need to choose between keeping pubs open or allowing schools to reopen, if it wants to keep coronavirus infection rates down.

When Kim Reeder started teaching in Parker, Colorado, 14 years ago, she found that managing the classroom environment took way more time and energy than actually teaching children, and she couldn't reach as many of them as she wanted.

I knew there were kids being left behind or not being pushed hard enough, because due to time constraints and class sizes, I had to teach the middle," she said.

Then Reeder discovered virtual school. As a middle school social studies teacher at Colorado Connections Academy for the past 13 years, she's found that "there's really no classroom management."

Online teaching at the academy, a public school for children from kindergarten through to 12th grade, gives her the time, freedom and energy to "give every student what they need."

Many schools around the world abruptly transitioned to distance learning in March, when Covid-19 forced brick-and-mortar schools to shut.

But much of what students have experienced since then didn't represent real online schooling, in which teachers are trained to teach remotely and online. 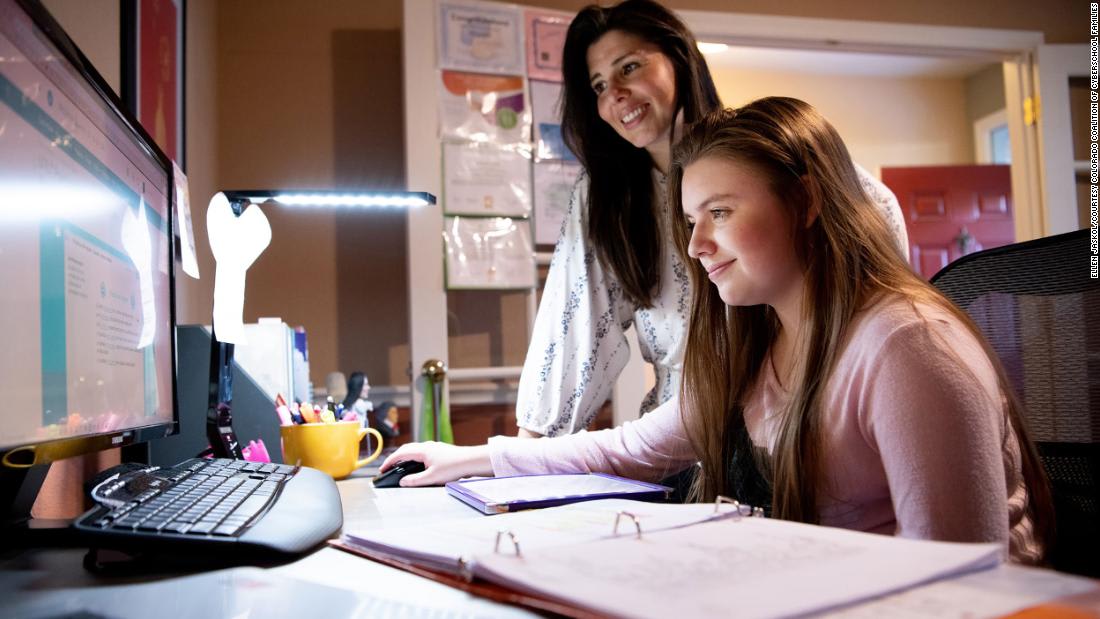 Online school: This is what it should look like

Every day, the US is reminded of Covid-19's ongoing impact as new death counts are published. What is not well documented is the pandemic's toll on the family members of those whose lives are lost to the virus.

New research suggests that damage is enormous: For every person who dies of Covid-19, nine close family members are affected, researchers estimate -- based on complex demographic calculations and data about the coronavirus.

Many survivors will be shaken by the circumstances under which their loved ones pass away — rapid declines, sudden deaths and an inability to be there at the end — and worrisome ripple effects may linger for years, researchers warn.

If 190,000 Americans die from Covid-19 complications by the end of August, as some models suggest, 1.7 million Americans will be grieving close family members, according to the study. Most likely to perish are grandparents, followed by parents, siblings, spouses and children.

"There's a narrative out there that Covid-19 affects mostly older adults," said Ashton Verdery, a co-author of the study and a professor of sociology and demography at Pennsylvania State University.
"Our results highlight that these are not completely socially isolated people that no one cares about. They are integrally connected with their families, and their deaths will have a broad reach." 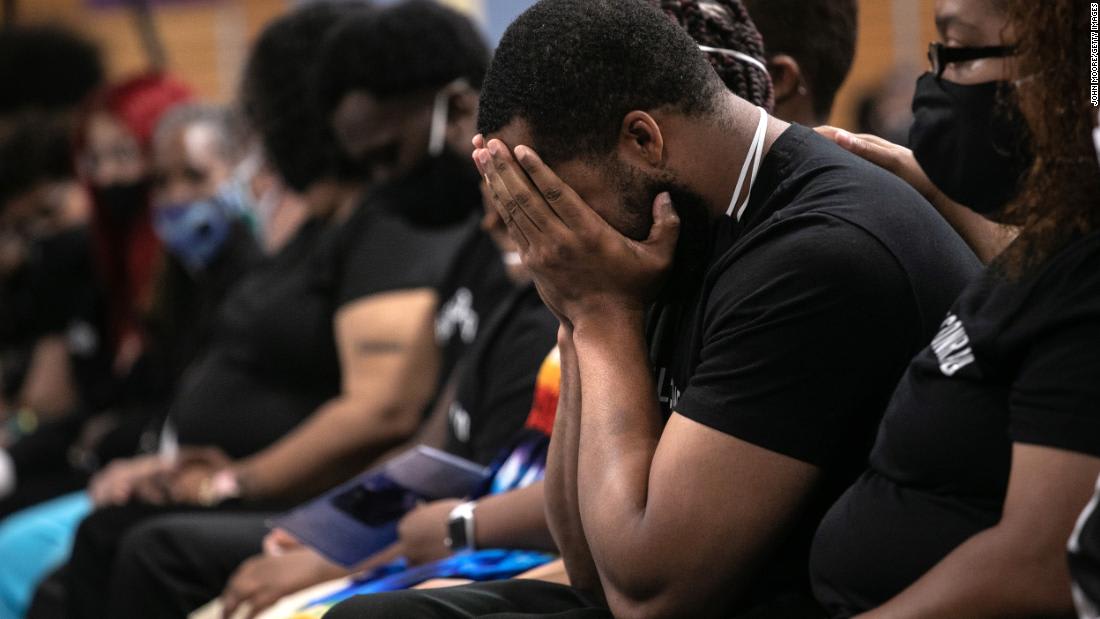 The 50-year reign of an Australia-based micronation formed by a "prince" has come to an end.

Hutt River, a self-declared principality, issued its own passports and once even declared war on Australia. In recent years, however, it's been known as a quirky tourist attraction.

But the economic impact of the Covid-19 pandemic, coupled with a giant tax bill, have forced the principality to announce it will finally "surrender" to Australia.

Hutt River's origins as a micronation date back to 1970, when the late Prince Leonard Casley claimed he'd exploited a legal loophole to create the principality in an isolated part of Western Australia, 500 kilometers (310 miles) north of the state capital, Perth.

Set on 75 square kilometers of farming land, it was more than twice the size of Macau, but populated by fewer than 30 people. 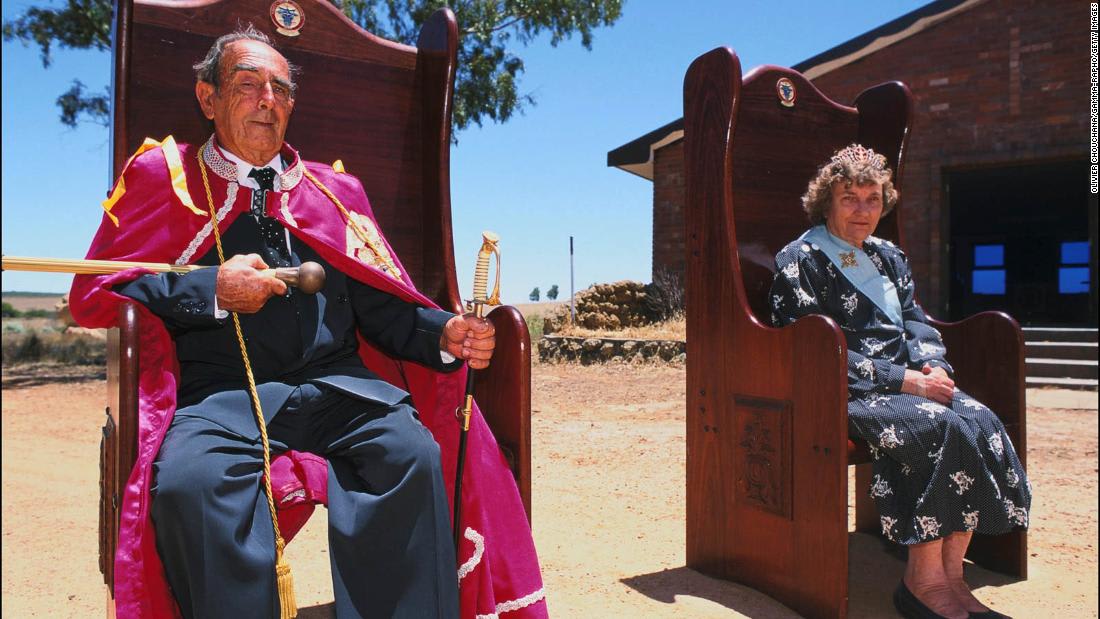 Australia's oldest micronation, Hutt River is no more thanks to Covid-19

"On a visit to the hospital for a separate procedure, I have tested positive for Covid-19 today," Mukherjee wrote in a post on his official Twitter account Monday.

"I request the people who came in contact with me in the last week, to please self isolate and get tested for Covid-19."

Mukherjee served as India's president from 2012 to 2017, following a career during which he held a string of prominent government roles.

India's Minister of Home Affairs Amit Shah announced on August 2 that he had tested positive for the virus and B.S. Yediyurappa, the chief minister of India's southern state of Karnataka, announced his positive diagnosis on the same day.

India has more than 2.2 million recorded cases of the virus, and 44,386 deaths, according to Johns Hopkins University.

Leaders from US college sports' "Power Five" conferences discussed postponing the country's football season and other fall sports over the weekend amid the coronavirus pandemic, according to reports from multiple sports news outlets including ESPN, Sports Illustrated and CBS Sports, who all cited several sources.

No decision has been reached yet, and the discussions are expected to continue over the next few days.

"It's an ongoing conversation we've been having for weeks," Big 12 commissioner Bob Bowlsby told CBS Sports on Sunday night. "We talk almost every day. I'm not aware decisions have been made."

The discussion took place in the same weekend the US crossed 5 million cases of the virus. At least 5,044,864 people have tested positive and 162,938 have died as of Monday morning, according to data collected by Johns Hopkins University. 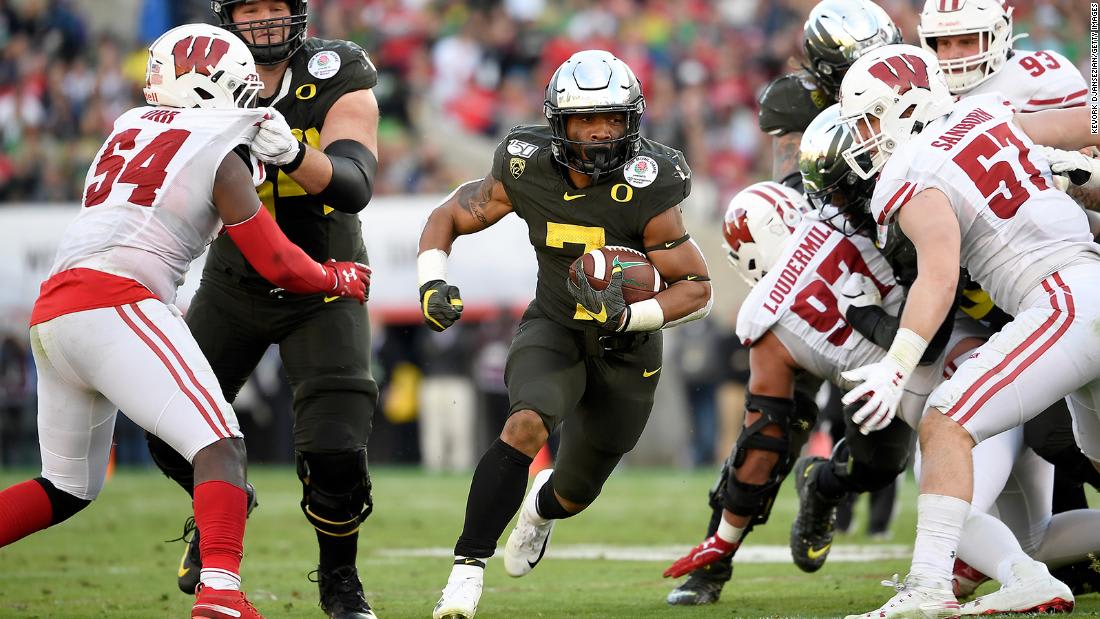 Greece recorded its highest ever daily tally of Covid-19 cases on Sunday.

The country reported 203 new cases, most of which are in its two largest cities -- Athens and Thessaloniki. Twenty-two patients in Greece are intubated, up from 14 on Friday.

The Greek government is expected to announce new pandemic measures this week amid the rising numbers.

Greece had previously managed to keep its case count low by enforcing a strict and early lockdown.

The country reopened its borders to tourists from the European Union and a handful of other nations on July 1.

Greece has so far recorded 5,623 coronavirus cases and 212 deaths, according to Johns Hopkins University.

The United States and Taiwan have signed a memorandum of understanding on health cooperation.

According to a news release, the signing was witnessed by US Secretary of Health and Human Services Alex Azar and Taiwan's Minister of Health and Welfare Shih-Chung Chen.

"This visit represents an acknowledgement of the United States and Taiwan's deep friendship and partnership across security, economic, health care and democratic, open, transparent values," Azar said during a news conference after the signing.

Chen added that it marked the beginning of a "new chapter in Taiwan-US relations."

The American Institute in Taiwan (AIT) and the Taipei Economic Cultural Representative Office in the United States also signed a different MOU on health cooperation on "global health security, investigation and control of infectious disease, research, prevention and treatment of chronic disease, and the development of drugs and vaccines," a press release from the AIT said. 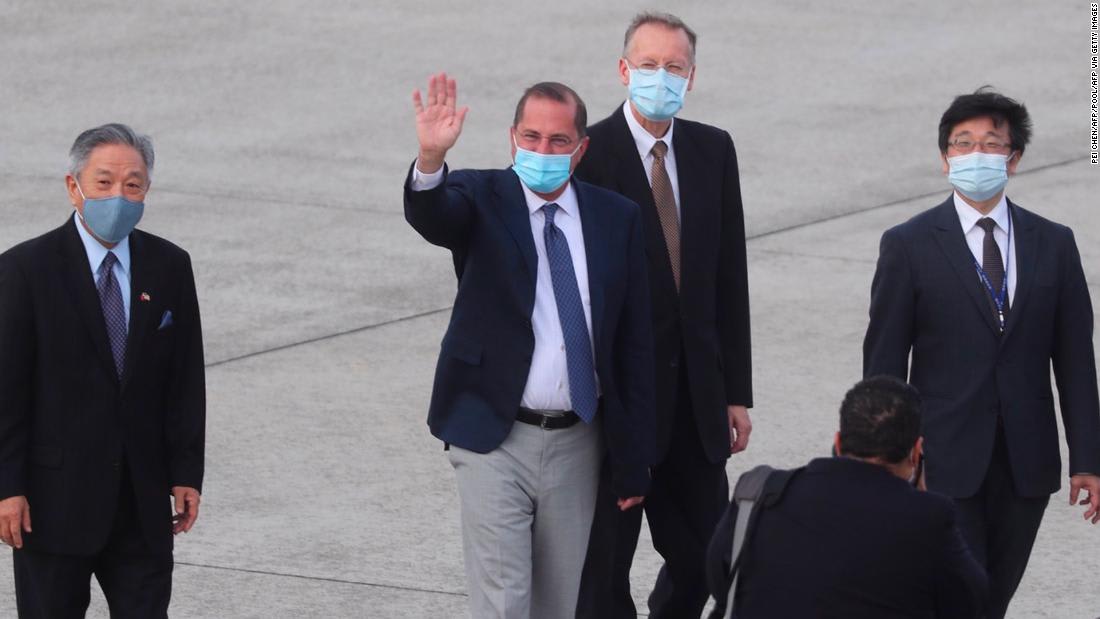