Restaurants help establish the unique character of our communities.

But "restaurants are dying," says legendary chef Marcus Samuelsson. "Four out of five of our favorite independent restaurants may not survive this shutdown."

That heartbreak is increasingly common as independent restaurant owners face an economic apocalypse. Together, they make up a half million small businesses across the country, directly employing 11 million Americans, with an economic impact that is felt up and down the supply chain, from farmers to fishermen.

Most survived on small profit margins before the Covid-19 crisis compelled many to temporarily close, and re-open at 25% capacity, operating with skeleton crews doing takeout and serving food outdoors when the weather permits. (But remember: Once the weather turns cold, the outdoor seating work-arounds will no longer be operative — and without a vaccine, many will be forced to close their doors forever.)

Now, they're trying to convince Congress to throw them a much needed lifeline in the form of the Restaurants Act, a bipartisan bill to establish a $120 billion grant program distributed through the Treasury Department.

Despite one-third of Congress co-sponsoring the bill, it has not been taken up by Senate Majority Leader Mitch McConnell as negotiations for a new round of relief drags on. One of the bill's original co-sponsors, Mississippi Sen. Roger Wicker said in a statement to CNN that, "The growing momentum for the Restaurants Act in the Senate and the House is something that should be considered as the next recovery package comes together ...This relief is also critical for other businesses in the restaurant supply chain like farms, bakeries, beverage distributors, and truckers."

Spanish actor and Oscar nominee Antonio Banderas revealed he has tested positive for coronavirus, in an Instagram post on Monday.

Posting on his 60th birthday, Banderas said he is marking the occasion while in quarantine and is feeling "relatively well, just a bit more tired than normal."

Banderas added he will use this time of recovery to "read, write, rest" and continue making plans to mark his milestone birthday.

“He most certainly intends to implement the four executive orders pertaining to unemployment insurance, student loans, on the payroll tax holiday, and evictions,” she said while appearing on Fox News this morning. She went on to criticize Democrats.

What this is about: With stimulus talks stalled, Trump announced this weekend he would go around Congress to deliver aid to Americans affected by the pandemic. A close read of the actual text of executive actions he signed Saturday suggests that even if they are deemed constitutional, they will not quickly deliver the aid Trump promised. You can read more about what's in the actions here.

The Cherokee County School District in Georgia says 19 students and 4 members of the teachers and staff have tested positive for coronavirus since the start of the school year one week ago.

The district confirmed the positive cases through their online notification system.

At least 16 schools across the county are impacted the district said.

Impacted students and teachers are being told to self-quarantine for two weeks, according to the district.

This is not the only impacted school district in the state. Last week, Georgia's largest school district confirmed that around 260 employees have either tested positive for Covid-19 or have been exposed.

The Gwinnett County School District (GCPS) employees won't be returning to school just yet as districts across the country continue to adjust their back-to-school plans to prevent the spread of the virus. 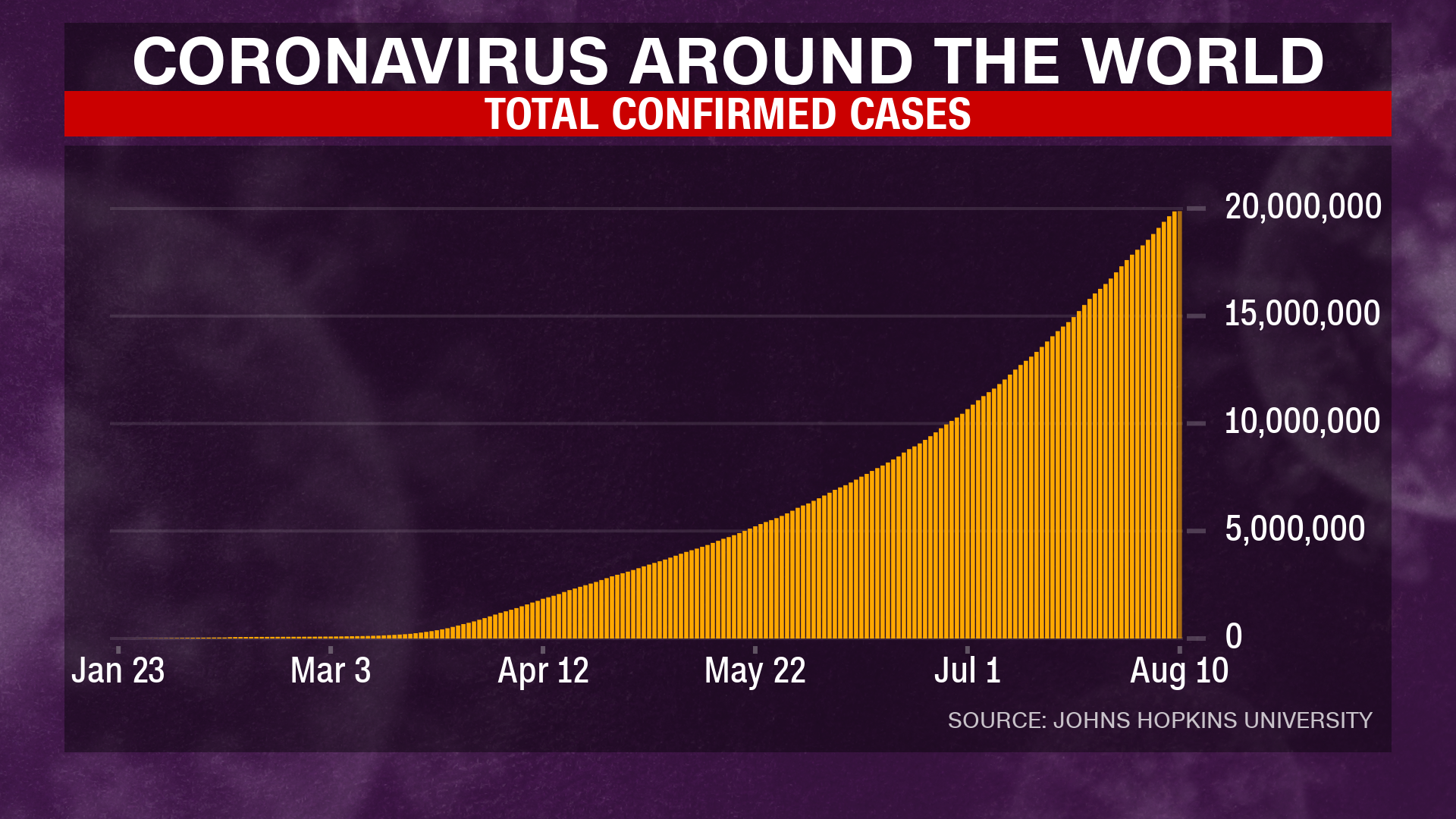 The US topped 5 million cases of coronavirus early Sunday — and as experts have highlighted before, the true number of infections could be many times higher.

The number means the country holds about a quarter of global cases of the virus and also tops the list with the most reported deaths in the world. As of 9:00 a.m. ET, the US had at least 5,045,564, according to the Johns Hopkins University tally.

To put the number in perspective, that means the United States has had more Covid-19 cases than Ireland has people. The number of cases is also slightly higher than the entire population of Alabama.

To put the speed in which the number is growing in perspective:

"This is such a sobering number," said Dr. William Schaffner, a professor of infectious diseases at Vanderbilt University.

The pandemic shows no sign of slowing, and deaths continue to climb, with more than 1,000 deaths reported each day over the past five days, according to data from Johns Hopkins University's Covid Tracker. Since July 21, there have been only four days the US did not report more than 1,000 deaths.

Track the virus in the US here.

More than 97,000 children in the US tested positive for coronavirus in the last two weeks of July, a new report says.

The report, published by the American Academy of Pediatrics and the Children's Hospital Association, said in those two weeks, there was a 40% increase in child cases across the states and cities that were studied.

The age range for children differed by state, with some defining children as only those up to age 14 and one state -- Alabama -- pushing the limit to 24.

The compiled data comes during back-to-school season as health officials are trying to understand the effects of the virus on children and the role young people play in its spread. Some schools have begun welcoming crowds back to class and others have had to readjust their reopening plans in response to infections.

In one Georgia high school that made headlines after a photo of a crowded school hallway went viral, nine coronavirus cases were reported, according to a letter from the principal. Six of those cases were students and three were staff members, the letter said.

While some US leaders -- including the President -- have said the virus doesn't pose a large risk to children, one recent study suggests older children can transmit the virus just as much as adults. Another study said children younger than 5 carry a higher viral load than adults, raising even more questions about their role in transmission.

At least 86 children have died since May, according to the new report. Last week, a 7-year-old boy with no pre-existing conditions became the youngest coronavirus victim in Georgia. In Florida, two teenagers died earlier this month bringing the state's death toll of minors to seven. 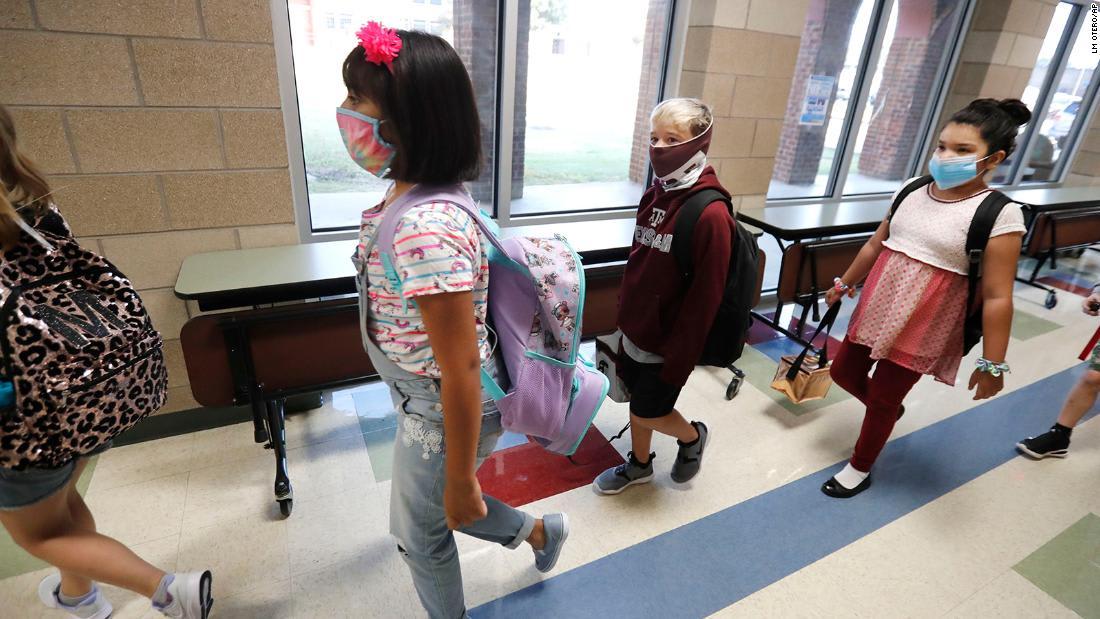 More than 97,000 children tested positive for Covid-19 in the last two weeks of July, report says

On Monday, Iraq’s Ministry of Health reported 3,484 new confirmed cases of coronavirus cases. This brings the total number of cases in the country to at least 153,599.

The health ministry also reported at least 72 Covid-19 related deaths. That brings the total number of deaths in Iraq to at least 5,464.

With stimulus talks stalled, President Trump announced he would go around Congress to deliver aid to Americans affected by the pandemic.

While the House remains out, both members of the House and Senate have been told to be ready to return to Washington, DC should a deal be reached. The Senate is set to convene today at 3 p.m. ET.

A close read of the actual text of executive actions Trump signed Saturday suggests that even if they are deemed constitutional, they will not quickly deliver the aid Trump promised. They may not deliver much at all.

Here's a breakdown of the actions, the many strings attached and questions about what they actually accomplish.

Trump described the memorandum signed Saturday as an action providing "an additional or extra $400 a week and expanded benefits."

But in reality, the additional unemployment aid is more complicated than the White House acknowledged and experts say it may not help a lot of the unemployed.

On Sunday night, Trump said he was open to allowing people to get the enhanced benefit without states picking up some of the cost. He said it was possible that the federal government could pick up the entire cost if governors make a request.

The executive action signed by Trump does not reinstate the previous moratorium on evictions, which lapsed in July. The original ban covered mortgages which were backed by federal funds. The nonprofit Urban Institute has estimated that moratorium covered just over 12 million households.

The new measure only states that "the Secretary of Health and Human Services and the Director of the CDC shall consider whether any measures temporarily halting residential evictions of any tenants for failure to pay rent are reasonably necessary to "prevent the further spread of COVID-19."

The action calls for the Housing and Urban Development and Treasury secretaries to identify "any and all Federal funds to provide temporary financial assistance to renters and homeowners" who are "struggling" to pay their mortgages and rents because of the coronavirus.

Experts told CNN that it was unclear based on the process laid out for government agencies how long it would take for anyone to see funding from this.

The payroll tax measure that Trump signed Saturday does not actually reduce the payroll taxes. It defers the due date for the portion of those taxes paid by employees — 6.2% for Social Security and 1.45% for Medicare — through December 31. It applies to workers whose wages are less than $4,000 on a biweekly basis, or about $104,000 a year.

This is similar to Treasury's deferring the federal income tax due date this year to July 15, from April 15.

You can read the full breakdown here.

US President Donald Trump's big executive power move ostensibly meant to support laid-off workers and stimulate the economy is already mired in confusion that threatens to leave millions of jobless Americans waiting in vain for help from Washington.

White House advisers struggled to explain Sunday exactly what the flurry of presidential actions, signed by Trump after the breakdown of talks with congressional Democrats on a new coronavirus rescue package, actually do or how quickly they might work. But it's already clear the measures fall well short of the President's billing.

In many ways, his intervention on Saturday is a typical Trump gambit. His executive actions appear hurriedly written and thought out -- designed for a political flourish rather than as a sound foundation for governing.

While the President claims to have stepped in to protect American workers, his actions may not deliver the help Americans need -- especially since his memorandum on unemployment benefits actually lowers federal payments from the $600 level under a previous Congressional package and his order for "assistance to renters and homeowners" does not extend the eviction moratorium that has already expired. His decision to unveil the measures Saturday in a rambling, hyper political news conference at his New Jersey golf club, playing to a gallery of well-heeled members, bolstered the impression of a political stunt.

That was especially the case since the President accompanied his announcement with untrue claims about election fraud and the true state of the pandemic -- which hit the 5 million infections mark on Sunday as more than 1,000 Americans die every day from the disease. 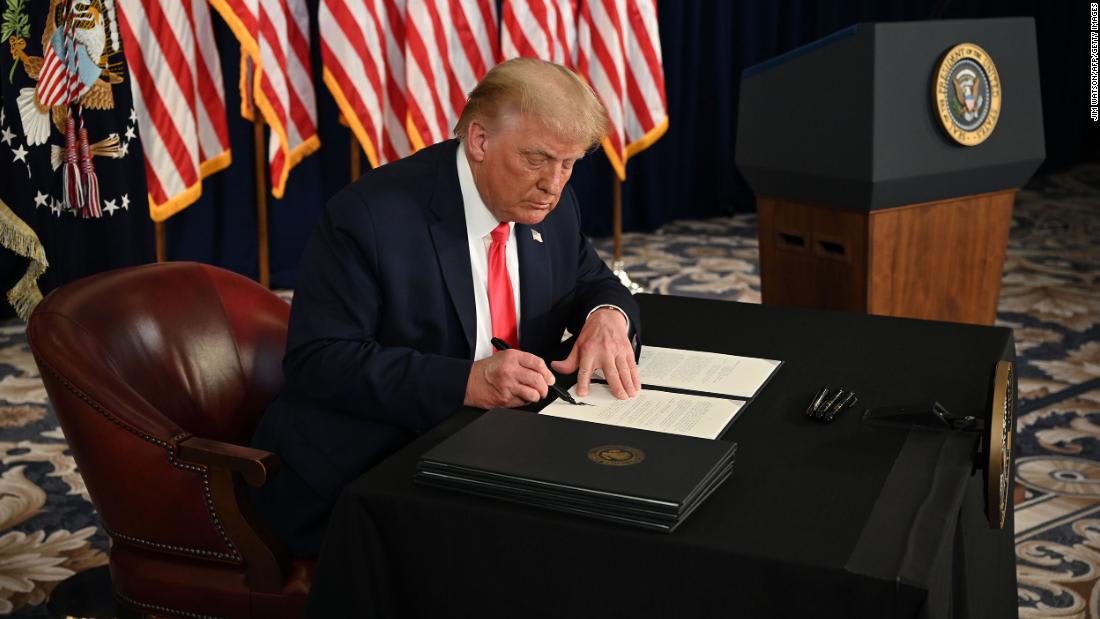